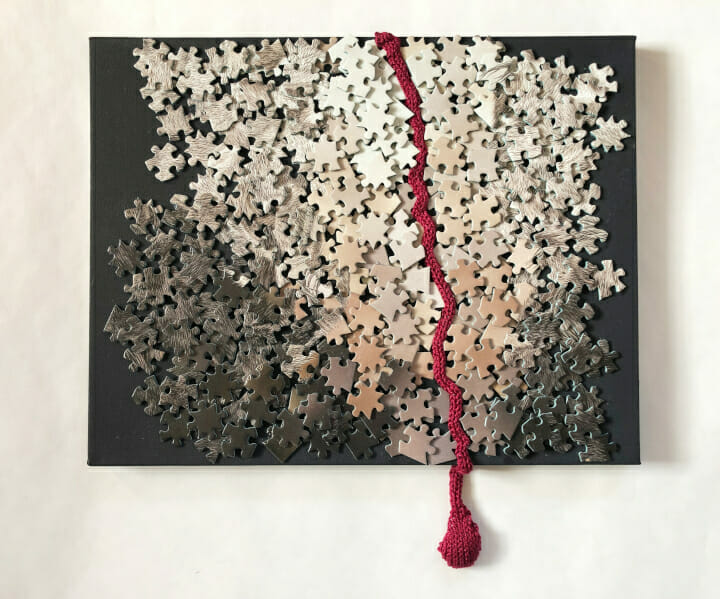 Adrienne Sloane is a contemporary artist whose research investigates, through the medium of textiles, social, environmental and political issues faced by societies in complex and challenging times such as those we are currently experiencing. Her Massachusetts studio is home to sculptures, installations, and works in which the artist experiments with a wide range of materials and techniques.

Sloane’s work has won many awards and has been included in numerous publications. Her work has been exhibited in private and public venues and collections; she has worked at the Philadelphia Museum of Art, Fuller Craft Museum, Goldstein Museum of Design, and Kamm Collection. In addition, she has taught internationally and worked on economic development projects with indigenous knitters in Bolivia and Peru.

This interview tells us about her work and her artistic journey.

Your work, “The End Of My Rope”, has been selected to participate in the 2022 edition of Fiber Art International. The American flag is a returning presence in this work as in previous ones. What are the reasons for this choice? And what is the message that it conveys in this work?

Created initially in response to a call for a show on rope, At The End of My Rope is a deconstructed knit American flag hanging limply from a noose. In play with the title (an expression in English meaning I’m done with this), this piece is a visceral, visual commentary on current events. Since a noose has particular resonance to an American audience, this is also a reckoning with our national history. The use of such an iconic image to address contemporary political and social issues evokes a visceral response.

Does the choice of a popular (and traditionally feminine, one might say) technique such as knitting also have a conceptual value? How did you start using the textile medium in your artistic practice?

By moving the context of knitting from clothing geometry to sculpture, knitting is a medium with a link to a rich and complex fiber tradition that has the power of history behind it.

My fiber journeys started in earnest in the mid-80’s when I bought a used knitting machine and began to teach myself how it worked. Susanna Lewis’s 1986 book, A Machine Knitter’s Guide to Creating Fabrics and a 1989 Threads magazine article on the work of Judith Duffey inspired me to explore the sculptural possibilities of knitting. I experimented for many years using hats as a form to play with color and design. However, in those years but for craft shows, it was a very solitary practice.  Returning to work after a studio fire in 1999, I found my work shifting in ways that more directly reflected my own thoughts and thus felt more centered while allowing for a different type of engagement with an audience.

It is not seldom that you embed words within your works; sometimes – I am thinking, for instance, of Marking Time – words are the very form of the work. What value does writing have within your artistic practice?

While I do have works that incorporate words in an actual piece, since the interplay between language and thought is in separable, words can help me generate ideas. For example, I looked through expressions in English related to rope choosing At the End of My Rope which spoke to me immediately as a title. The piece flowed from there. Words can also help interpret a work once completed as in Uncle Sam’s Tea Party.  For me, this process can resemble dream interpretation in that verbally describing a dream, often sheds light on its meaning.

My work often addresses such universal issues as war, climate change as well as issues of our American political system. The iconic image of the American flag appears often since it is such an evocative and recognizable symbol.

In your opinion, what is the responsibility of the artist and the role of making art in times of such rapid and radical changes?

It appears to me that there has been an increasing trend towards interconnection and fluidity among disciplines including the arts and sciences, which are inextricably linked to our search for meaning, truth and knowledge. Artists are charged with interpreting the world through an expanded lens and putting it out in the public square. For those artists who choose to address pressing social issues, art has the power to create empathy, educate and serve as a means of advancing social justice as it creates a platform for reflection, collaboration, and community building. Communicating ideas that transform the broader cultural understanding of issues can lead to positive change.

One of your recent installations is Truth to power: what is the genesis of this work? In your opinion, in the search for truth, can art be the voice of those who have no voice?

Clearly an anti-war piece, Truth to Power was the next generation of an earlier work titled Cost of War. Because it is knit wire, this work has a dimensionality that the wall piece lacked. Walking around this piece, which moves with the slight breeze as one passes, adds to its impact.  Women’s bodies are included as a result of feedback from Cost of War, displayed at Fiberart International 2007, which portrayed only men as casualties of war.

With works like The Unraveling, you engage the audience in active interaction with contemporary issues. What is the relationship your work establishes between you and the audience?

Because visual artists usually work alone, we often have limited opportunities to engage directly with viewers to gauge the impact of a piece.

The Unraveling performances allowed for amazing direct contact and feedback. Because the last presidency was so destructive and demoralizing, I was drawn to knit this piece as the visual representation of our rapid dismantling of our democracy. Unraveling an American flag with the hope that the Constitution revealed behind it would be protective, engaged audiences in all venues at a visceral level.  People would gather in a reverential silence while I unraveled the flag. I also found this to be a very emotional experience. Speaking to school children and others about the meaning of this piece, was another avenue of interaction. In real world consequences when this project wasn’t funded, a local Arts Council member resigned in support of free speech. Links to several videos of unravelings are on my website.

Since 2012, I have conducted two postcard campaigns in conjunction with my art. Titled Lobby Congress with Art, I initially sent postcards to all members of Congress to stop the infighting and work on behalf of the electorate. I then gave away postcards with images of A House Divided to anyone who agreed to write to their legislators. This also allowed me to interact directly with viewers and offering them a voice while encouraging them to get involved. It was a wonderful opportunity to engage with other viewpoints and I had many gratifying conversations as a result.

Using all fiber terms coupled with the Constitution, the text read as follows:

We The People
Respectfully demand that You Stop
tying the Country up in knots
and attend to knitting together
a national fabric of Domestic Tranquility
for a more Perfect Union.

The Unraveling became my second postcard campaign. By happenstance, The Unraveling was quarantined at its last showing at the Massachusetts State House from March 2020 through March 2021. I did a public unraveling at there at the beginning of March before lockdown.

Which movements, artists, or people have influenced you most in your artistic career?I am self-taught but as a child the arts were an important family value. We were exposed to various media including such fields as dance and ceramics. My grandmother and sister both became painters.

Since I am most drawn to fiber and/or dimension work, among the artists I find compelling are Sheila Hicks, El Anatsui and Ruth Asawa all of whose innovative styles capture my enduring interest. I also particularly admire such artists as Ai Wei Wei whose work contains influential, important messaging.

The work you are most connected to?

While I enjoy beautiful, expressive work, I am most connected to work with original and strong execution with messaging; conceptual art but only when well crafted. I always prefer that the work speaks for itself and doesn’t require extensive wall text to explain imbedded meaning. 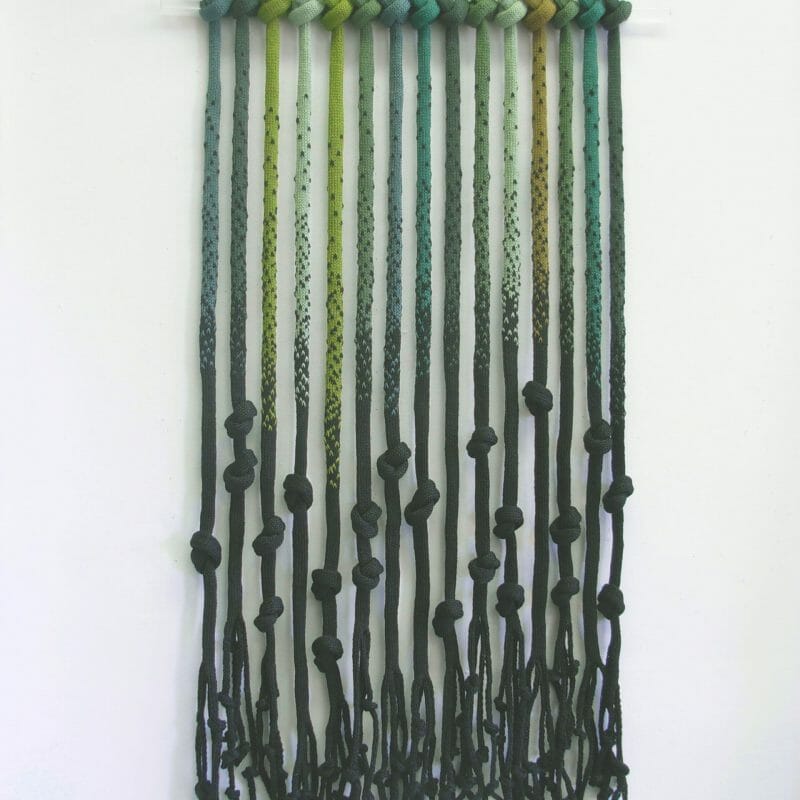 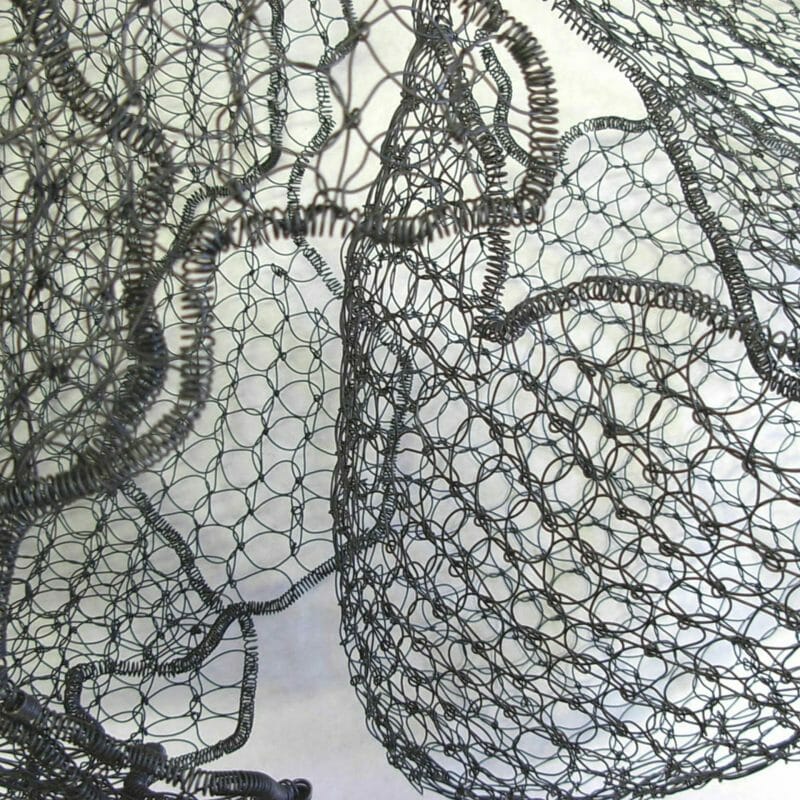 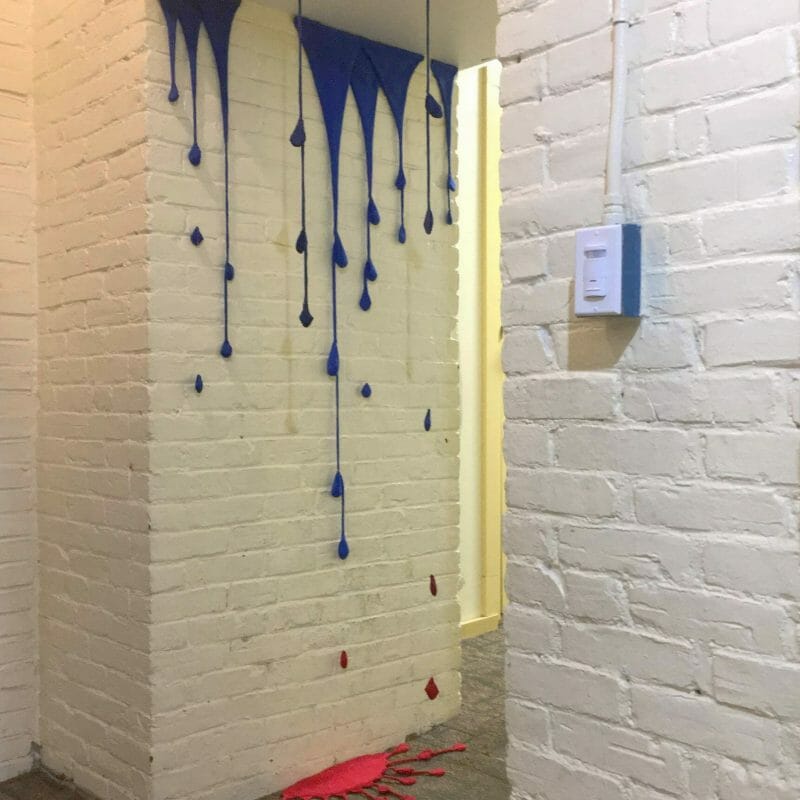 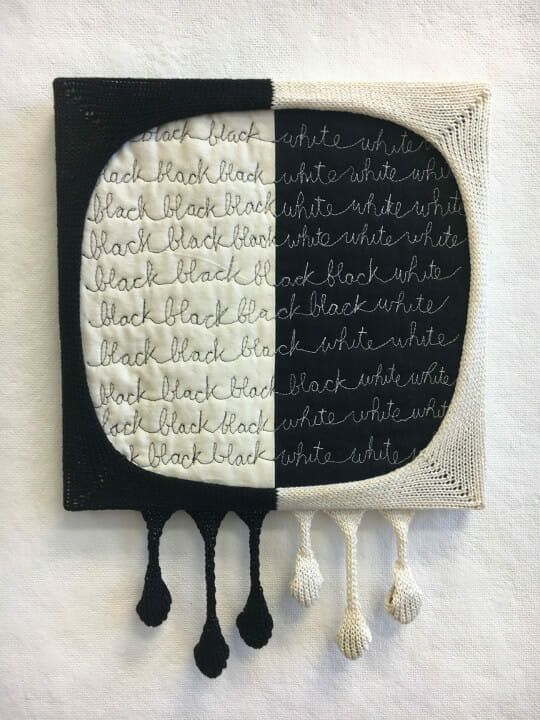 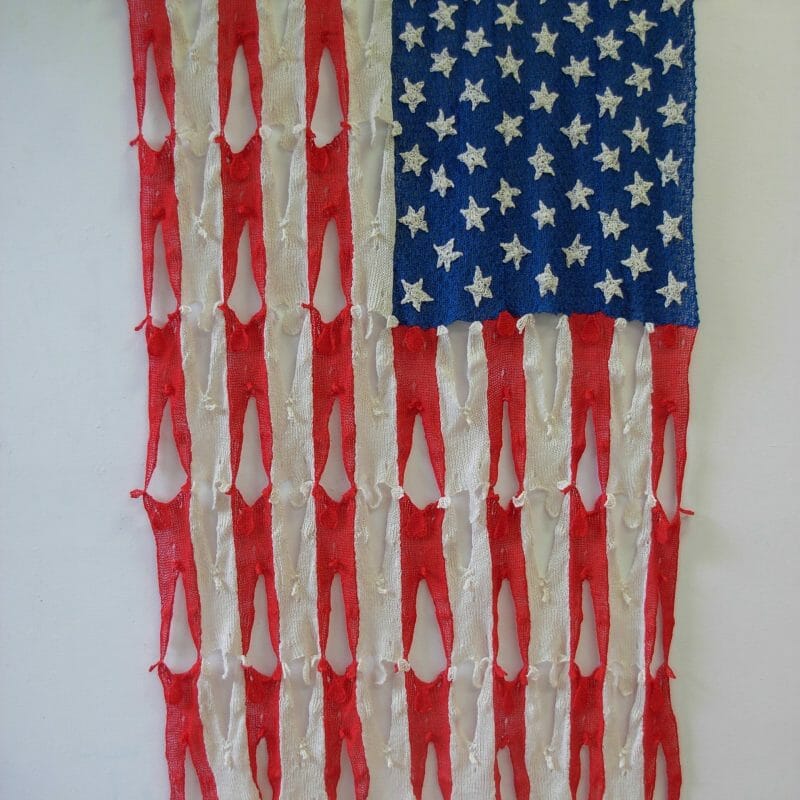 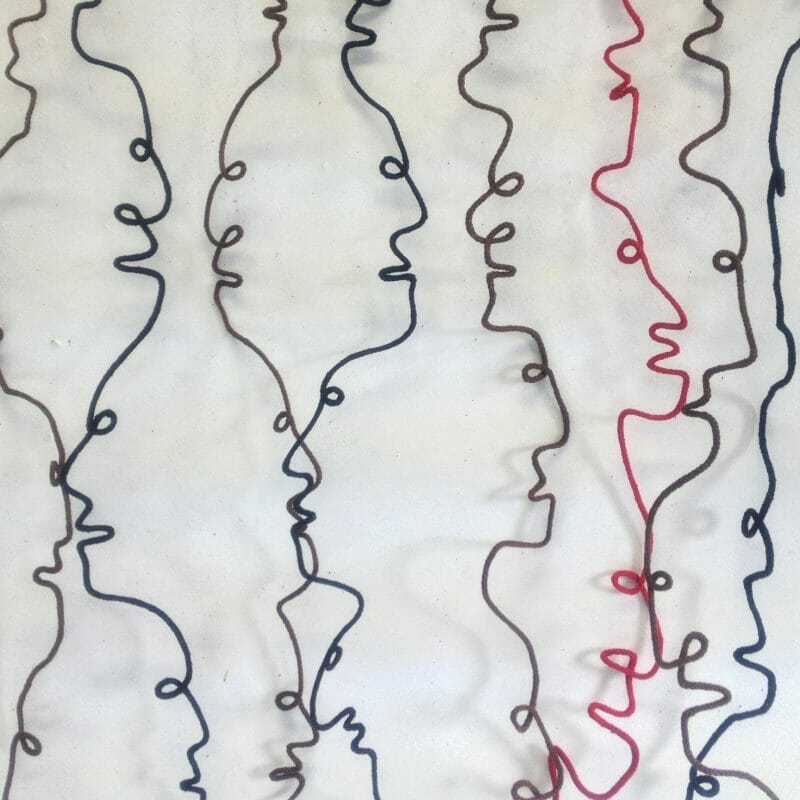 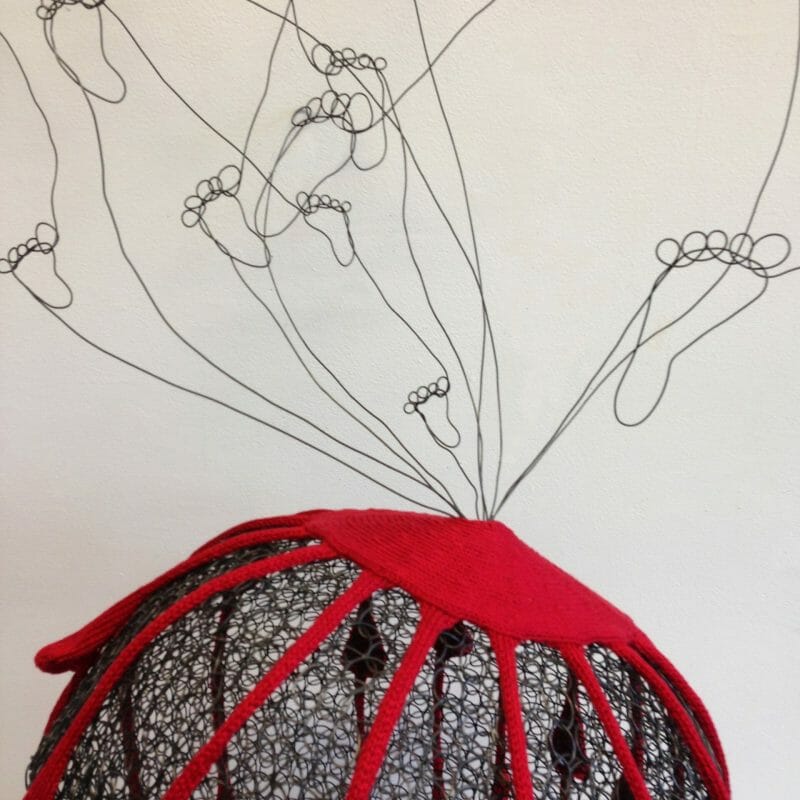