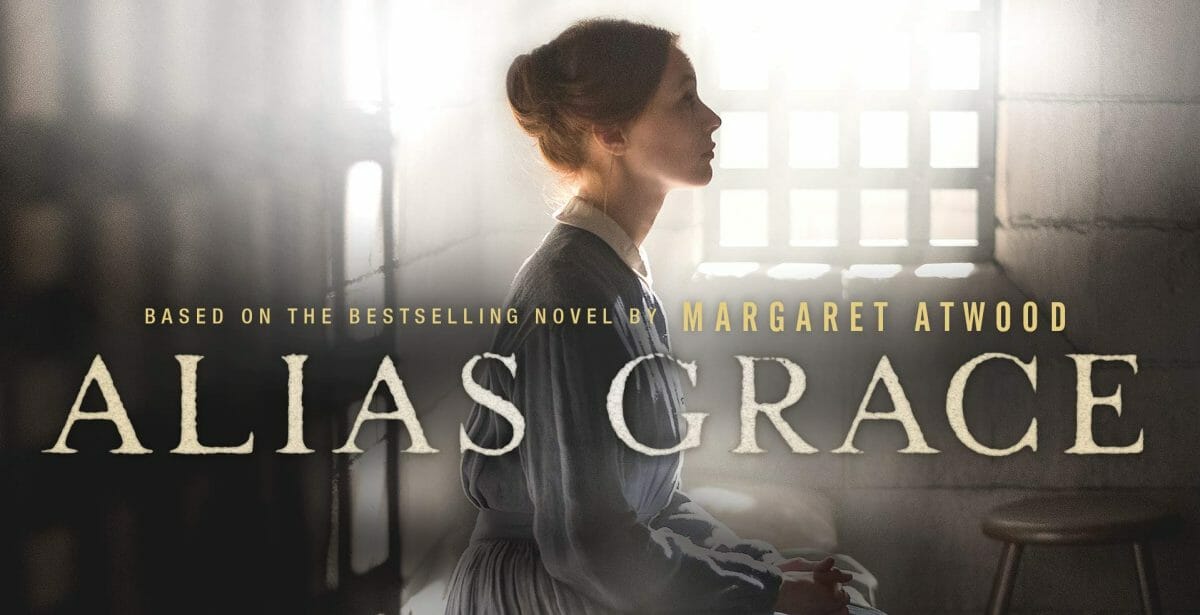 For the May movie I chose a writer and a television series based on her well-known and widespread novel, the writer is Margaret Eleanor Atwood and the novel “Alias ​​Grace” in Italian “The other Grace”.

Margaret Atwood was born in Ottawa in 1939, she is a writer but also a poet, environmentalist, feminist; her genre of writing ranges from fairy tales to poetry, with a narrative that smacks of fantasy because it uses myths and fairy tales.

However, it does not disdain unsolved criminal cases

Her works testify a deep attention and concern to the role of the woman and she manages to narrate it with much realism. This is not her  first novel which is written and produced for TV, “The story of the handmaid”, which preceded it, has already given her international fame along with a great audience success.

The plot is freely inspired by facts that really happened.

Two heinous murders  took place in Canada in 1843. Grace, barely sixteen, is on duty as a maid in the house where the crime takes place and is accused together with James the groom. The man is executed as a material perpetrator of the crimes, while Grace is sentenced to life imprisonment. But the evidence against her is mostly circumstantial.

At this point in the story the figure of a young doctor is introduced, he  is interested in  Grace’s case and he  visits regularly in  the prison where she was transferred after spending a few years in a criminal asylum. Grace retraces her past with him and tells in detail her short life before the murders. Immigration from Ireland, the death of the mother, the alcoholism of the father, the first job in service, where she spent a few months of happiness with her friend Mary, until Mary died following an illegal abortion.

Grace’s memories reappear and fade as Dr. Jordan trudges, limited by the limited psychiatric knowledge of the time, after all we are in the nineteenth century. A somewhat morbid, dark attraction is established between the two. The characters really existed and we know that Grace spent many years in prison, more than twenty, but was later forgiven and released.

This is the story as told in the six episodes of the television series, but the thing that attracted me the most, and here I enter into conflict …. were the quilts. Mainly for one that I managed to reproduce with great effort: “The trees”, “Gli alberi” that many quilter friends know well, stands on one of the walls of the “Scuola Romana Quilting”.

This series satisfies our idea of ​​linking the Art of Quilting to movies. In the historical setting movies, you can find quilts at every turn, I don’t know about you, but for me it brings me pleasure. The same happens in many English costume movies

The idea of ​​representing the landscape of woods and gardens with fabric is a trend that has been widespread since the mid-1800s and there are magnificent examples, in museums primarily. The chosen colors were background white, with green, blue and red.

These trees were called in different ways: ‘trees of Paradise’, with explicit reference to apples and to Adam and Eve, or a more historic ‘Washington quilt’, making the connection to  a cherry tree that the mythical president loved. The quilt with twenty identical trees is really a challenge and represents a pine forest with green trunks and red branches. In a tree detail, highlighted by Virginia Gunn, author of an interesting article from which I took some ideas, we note that the author did not bother to be precise, the tops of the triangles are a little cut in the tips and this small imperfection however adds life and a discreet charm to the whole. While many of the traditional quilt subjects of the past have disappeared, “The trees”, “The pine trees” continue to be chosen and loved. I am proof of this.

But wait,you need a little addition, that is another movie  with nice quilts. It is “Una single in Carriera”. A perfect “romance” film, not to be confused with “A career woman”, a great film directed by Mike Nichols with Melanie Griffith etc…

“New in Town” , the original title, is a 2009 film with Renée Zellweger, Harry Connick and other fantastic actors and is of the romance-comedy genre.

She is an industrial executive, lives in Miami and suddenly lands in  Minnesota in an almost unknown country with the task of liquidating a factory that produces yogurt and  which employs the whole Community.

The first hostile encounter between her and the inhabitants of the place is turned upside down and the protagonist as a cold and whole business leader  will be overwhelmed by the goodness of those people so much that she will be able to change their destiny with her  own. The factory will not close; it will go from the production of yogurt to that of a tapioca-based soup with a secret ingredient. There will be an unexpected market success and a happy ending with the protagonist and the union representative united in marriage.

There are several quilts, a beautiful “log-cabin” (see photo) hit me right at the beginning. It is inside that quilt that the protagonist rolls up, almost frozen from Northern Minnesota weather. Americans, especially in the provinces, don’t notice that, they are used to having them at home, it’s normal, and the quilts appear and disappear, I recommend you watch it, the film is very consoling and  these days it’s good for us.

Margaret Atwood deserved a wider presentation, but I hope it will serve as an invite to read her books. Recently, an invitation to join her in a Writing class held by herself arrives on my Facebook page, there is also David Mamet  among the writers collaborating and that is all I am saying. To the invitation I replied: “wish I could!”

A quilter friend, whom I know well, made a quilt for her daughter with many fancy fabrics matching the hues of red, beautiful and original, however she is American.

This is my  quilt “The trees”