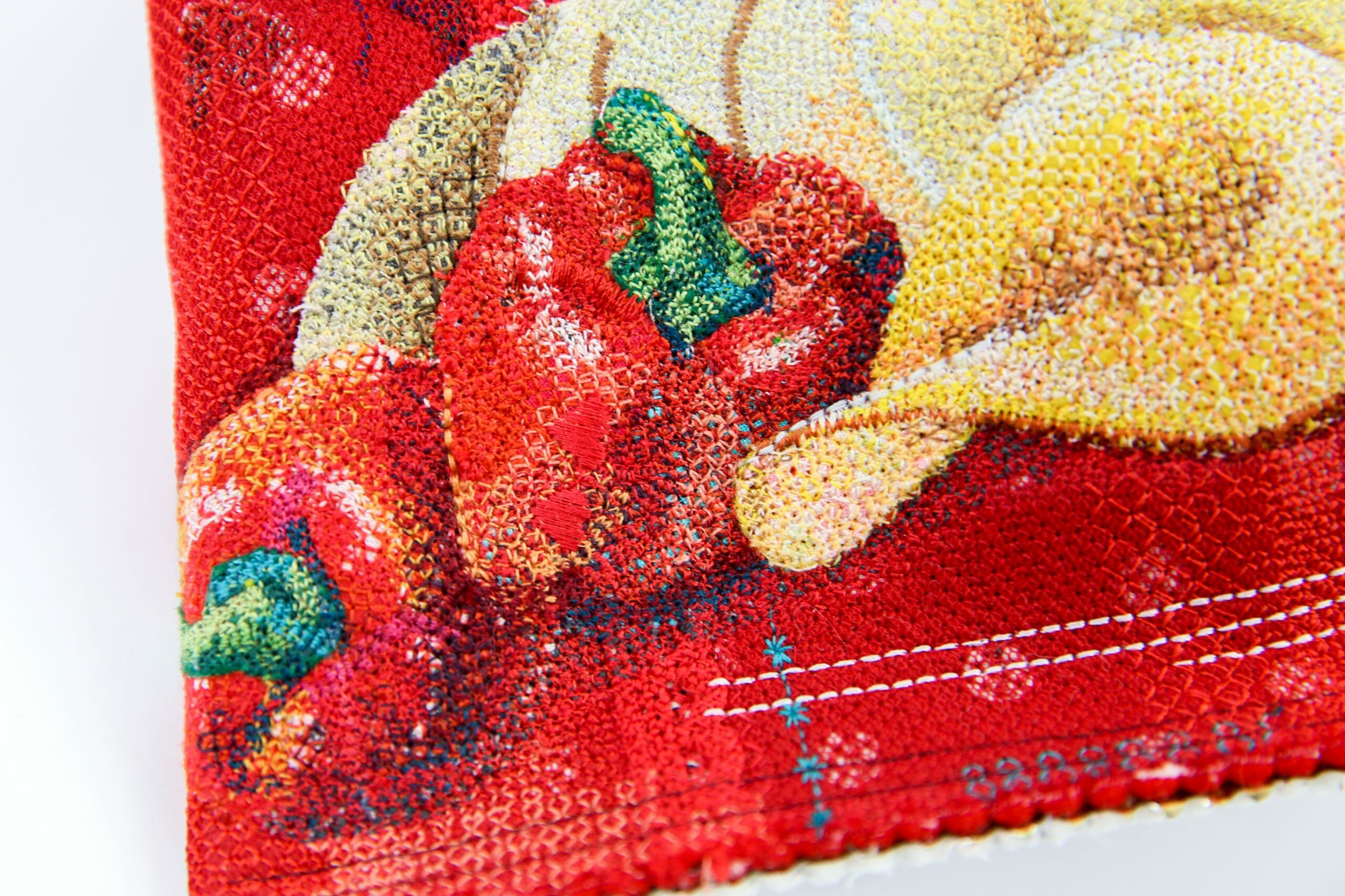 Alicja Kozlowska’s artistic practice combines her passion for art and fibres with a reflection on mass production and extreme consumerism.

Born in Warsaw, Poland, she graduated in Graphic Design and is currently studying Domestic Design. Kozlowska has always been fascinated by the Pop Art movement and creates three-dimensional embroidered felt sculptures inspired by everyday objects, which she sometimes transforms into elements to be used in performances and interventions in public places.

Her works are exhibited in galleries and museums in Europe and the United States, such as The LAM Museum, Danubiana Meulensteen Art Museum, Pesti Vigadó Gallery.

In 2021 her works won the prestigious “Hand & Lock Prize for Embroidery”. She has numerous publications in specialised magazines such as Designboom, Inspirations Magazine, Elle Decoration. In 2020 she participated in the international project #iClapFor. She is currently working on the ‘i.d. project’, a study of different designers.
Alicja was recently selected to participate in Fiberart International 2022 which will be held June 3 – August 20 at the Brew House Association and Contemporary Craft in Pittsburgh, Pennsylvania

She found some time for this interview between a work of art and an exhibition.

The first reflection that your works arouse in me is that, due to the exasperated evolution of consumism and a compulsive overproduction, today we do not buy ‘products’ but a sum of packaging and communication strategies while the content has become almost secondary, sometimes even ‘unknown’. In the case of junk food, for example, we buy food of dubious nutritional quality but well ‘dressed’ and very well promoted. In soliciting attention to the objects of our daily life by transforming them into unique artworks, is there the desire to investigate our awareness of what things nourish our existences – body, mind, spirit?

In my works, I very often manifest a lack of consent to the convulsive consumerism engulfing us. I try to force the viewer to leave the comfort zone and change from a passive observer to an active activist for a better tomorrow. I decided to capture that without deviating from the direction I chose, using my own techniques of working with the fabric. Thanks to extensive media campaigns, the public awareness of the inexorably impending ecological disaster is growing. This does not mean, however, that we have a chance of success. Too often, we can explain irresponsible behavior to ourselves by the need to meet our daily needs. We have an inner sense of social responsibility, but on a daily basis we are carried away by the rush, the lack of time and the pursuit of technological development, which seemingly makes our lives easier and more pleasant.

I want to show a state of confusion through the lens of everyday life that surrounds us. We often talk about the problem of tons of plastic in the oceans or melting glaciers, but does anyone still pay attention to the reality that surrounds us? With the development of civilization, the world has become very small. We tread on the remains of undeveloped nature for the sake of contact with it. We create National Parks to protect nature and then transfer tons of waste there to look again at what we are just losing.

The world is changing, but I strongly believe that each of us has an impact on the direction of these changes. I would like my work to be an impulse to disturb the comfort of indifference and anonymity. My leading idea is sustainability, but it only opens the door to a long path of change and the need to break free from the bonds of indifference.

You draw from reality giving back its… soft representation. Does the use of the textile medium have a conceptual meaning in this ‘transformation’?

First of all, modern artists, from Pablo Picasso and Marcel Duchamp on, have established that art can be made of absolutely any material, so the media of modern art, in that sense, have ranged from found or appropriated objects and materials of all kinds, to the artist’s own bodily excretions and the body itself. Following this path, combining my love for the fabric and my goal, I try to additionally strengthen the message by softening the visual layer. By giving my works softness, I try to influence the viewer by manipulating their senses. However, I can assure you that they are far from cuddly toy.

Do you look at the world aroung you with the ‘eye of the artist’ as an infinite source of inspiration, or does the idea of ​​the artwork arise from a reflection and then you searches in everyday life the form that can best represent it through the artistic practice?

I’m inspired by daily life, everyday objects, mass culture, things to which we do not pay special attention, which are an indispensable part of our everyday life. It all intertwines with Pop Art.  It’s kind of infected in a positive sense.

I’ve always been inspired by Any Warhol and Pop Art. What in Warhol’s works captivated me the most is the utter elegance, simplicity and directness of his paintings — his ability to distill a world of information out of a picture through minimal but brilliant intervention. It reveals a profound social and technological complexity. He deals with the deepest of human emotions: desire, fear, voyeurism, how the individual intersects with culture. Painting by sewing for me is the format to address deeply negative, culturally constructed indifference. Andy Warhol proposed a witty way to inherit Marcel Duchamp’s legacy. From both Duchamp and Warhol I learned the relationship between handicraft and mass production, and between works of art and every day consumable commodities. As the times were changing, and moving to a more genderless and borderless culture, Warhol successfully embodied the spirit of the era. Now it’s time for me. The challenge is huge because cosmically more complicated present.

Yours is a slow and painstaking artistic practice that requires trained dexterity, which however has its roots in a fast, immediate, even ephemeral and increasingly virtual reality. In this synthesis of opposites, is there also a desire to recover the value of time and of hand made skills?

Very good point. It’s a bit like culinary art, a clash of fast-food with an exquisite restaurant where we feed not only the body but also the soul.

Our time is priceless and we unfortunately remember it too seldom. For me, everything that is made by human hands is also of great value. Regardless of whether they are wall ornaments, paintings or sculptures. I try to break the current trends and perfect my own techniques.

In your ‘performances’, the reaction of the public caught by surprise to discover the anomaly in a situation or environment taken for granted, becomes an integral part of the work. Can you tell me how these performances are born and what is the feedback from the public?

It is a very interesting part of my artistic activity. For my projects, I most often use the space of large-format stores. I do it in different parts of the world, from the Far East, Europe, the Middle East and both Americas. You can often meet me in public spaces in large cities. It happens that I wander into shady surroundings if the topic of my work is, for example, degeneration.

The reactions of the audience are very different, often depending on the culture of a given place, civilization or cultural development. The inhabitants of highly developed countries react most spontaneously, but it does not mean that they can correctly read my message. I also noticed that I arouse the greatest interest among relatively young people and the older generation. The former are interested in the idea and meaning of the message, while the latter focus more on the technique of performance and mapping details.

Textiles always have a characteristic linked in one way or another to memory. Do you find in your choice of this medium a link with a memory – of childhood, familiar, ancestral?

As a child, my grandmother taught me to sew and crochet. It was from her that I learned the basic, popular techniques. I have traveled a lot and had the opportunity to see the work of the masters of this art all over the world. Over time, gaining more and more practice I developed my own one.

Is there also an ironic component in your works?

I will begin with a quote from Eric Fischl: “There’s nothing insincere about irony.”

If my works were to be cleared of the idea that guided me, they could all be considered ironic. The entire Pop-art trend could be considered ironic. In my opinion, it all depends on the perception and understanding of art. I sometimes ironize my own projects by adding elements that break the message contained in them.

Yours are small works that betray a great mastery of the medium. How many techniques and materials do you use in your practice? And how much effort did this training require?

I started my artistic path very typically through adventures with graphics, sculpture and painting. At the same time, as if involuntarily reaching for textiles, I sewed, embroidered, and crocheted. I was constantly stimulated by the reality that surrounded me, especially the political, environmental and mass production problems that were present. Painting by sewing for me is the format to address deeply negative, culturally constructed indifference. I create 3d embroidered felt sculptures of everyday objects to provide an opportunity to rethink these items we take for granted. I create the aesthetics of Pop Art. In my works, I use a needle, like a brush. I combine various materials from labels, newspapers, foils, to felt and fabric.

For the few who still consider textile works only crafts or a hobby and mainly a prerogative of women, what would you say?

Gender doesn’t matter in my opinion. There is no need to prove that I’m an artist. Art is a very broad concept. I am not in favor of classifying and defining creative processes. I believe that everyone who would like to create, should search and experiment as much as possible, not close on one technique. If you lack inspiration and have the impression of repetition, take a step back, forget about trends and just start creating. As Andy Warhol used to say: “I just do art because I’m ugly and there’s nothing else for me to do.” 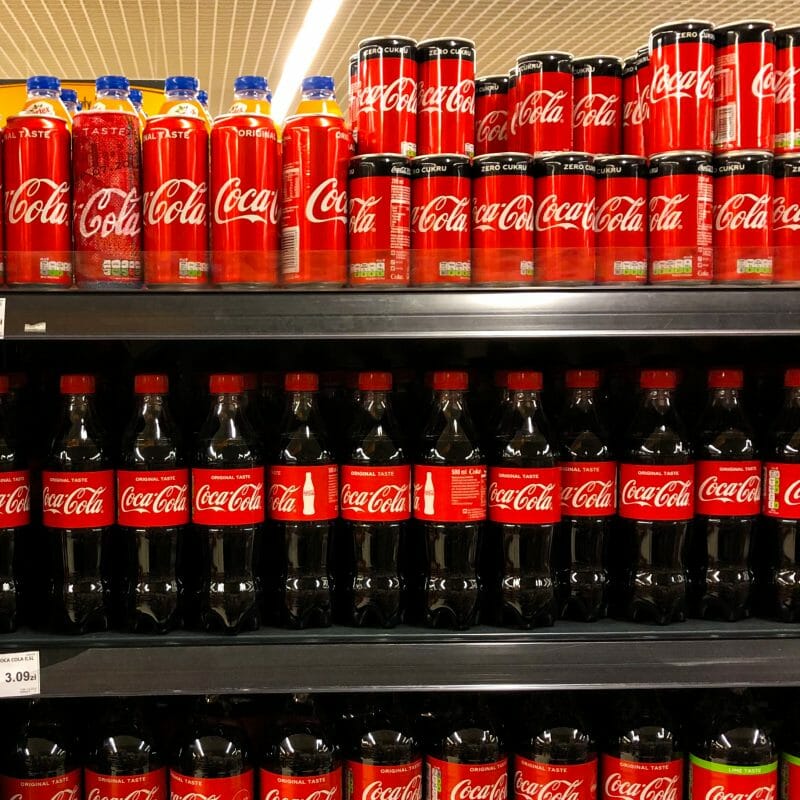 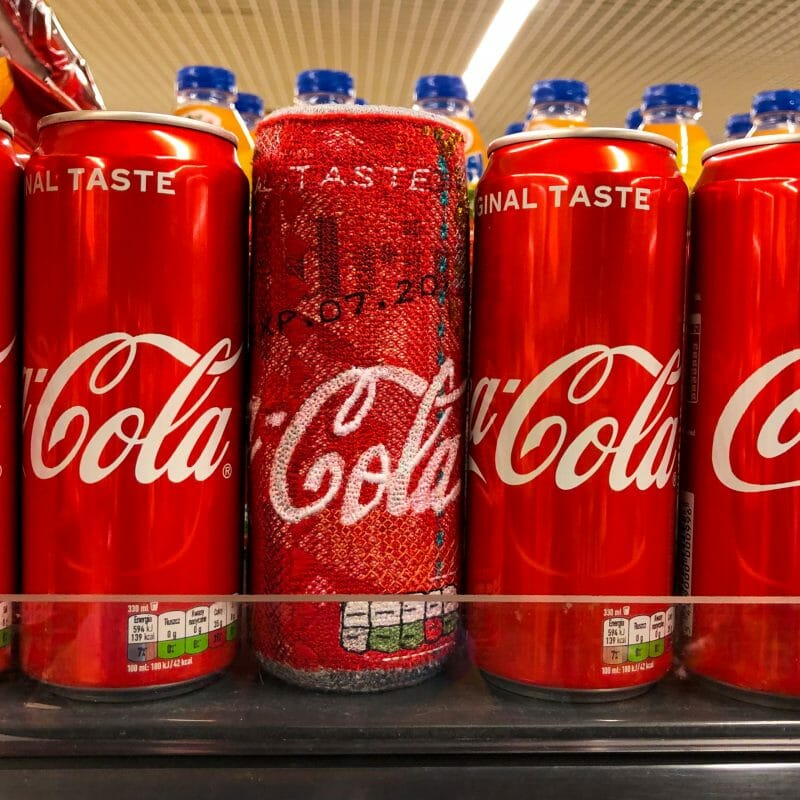 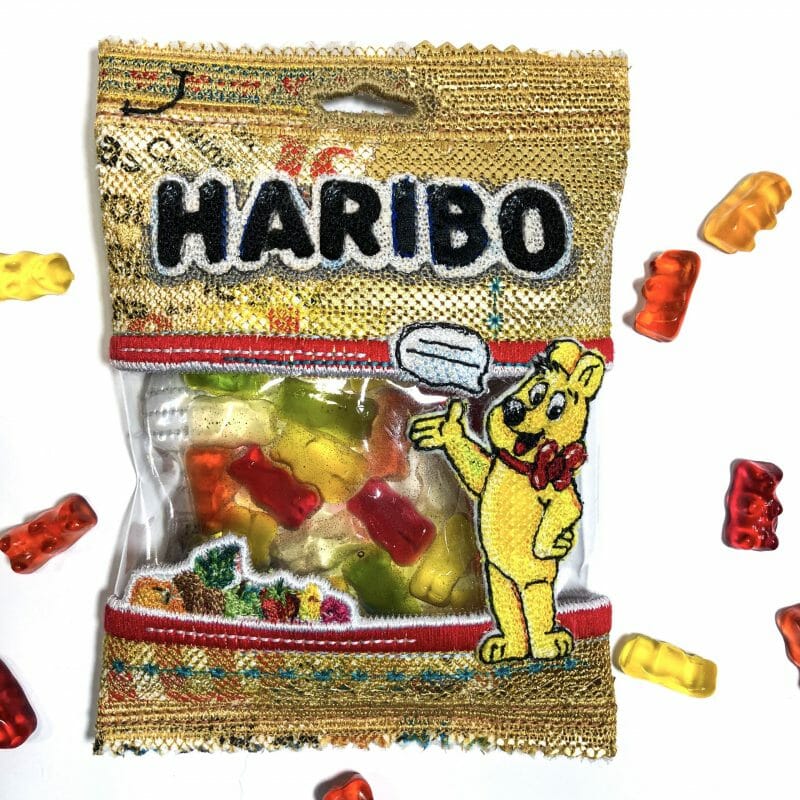 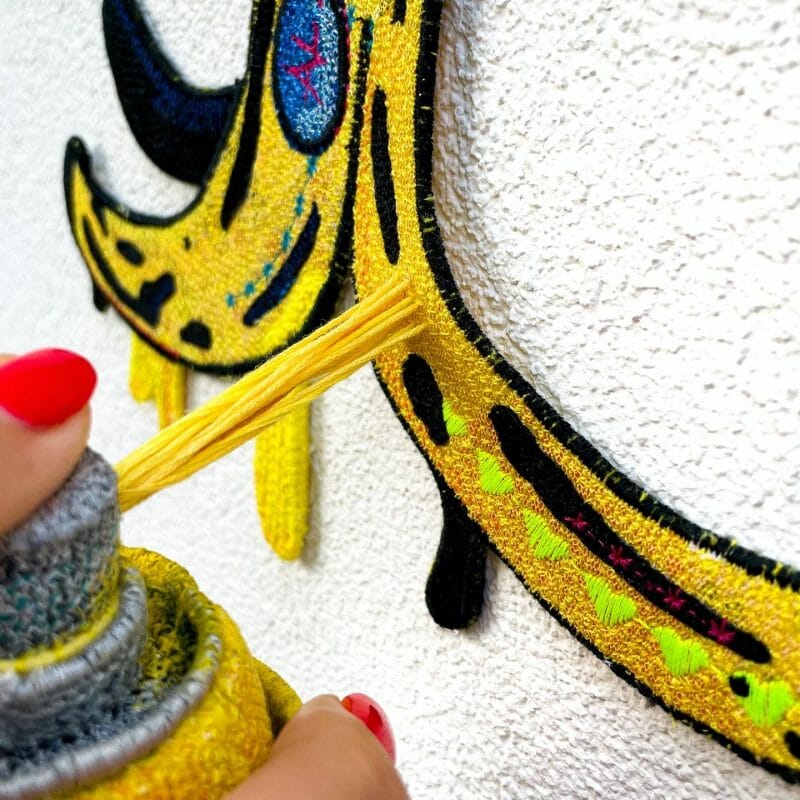 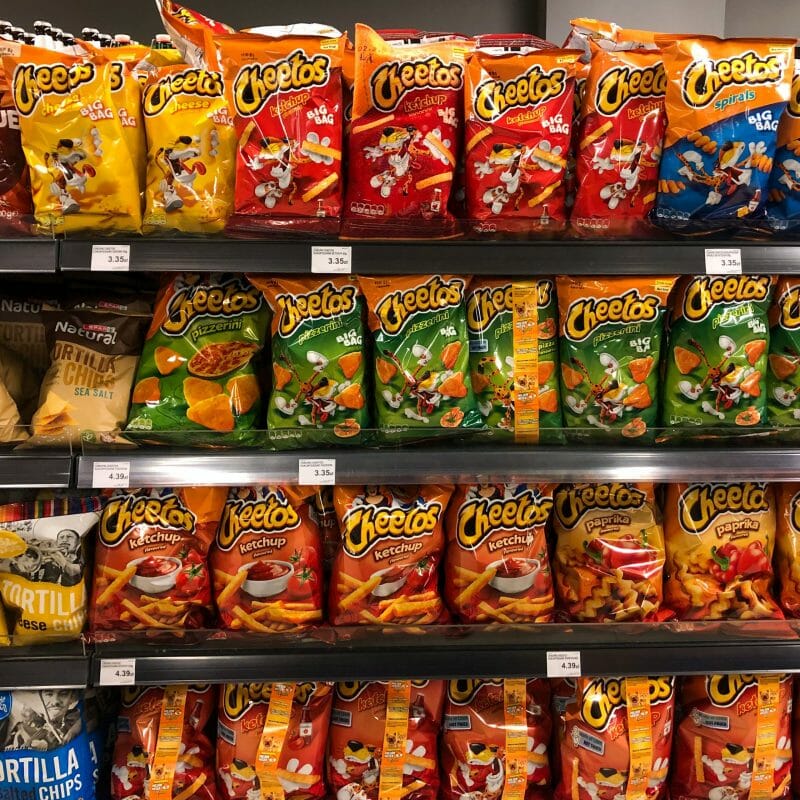 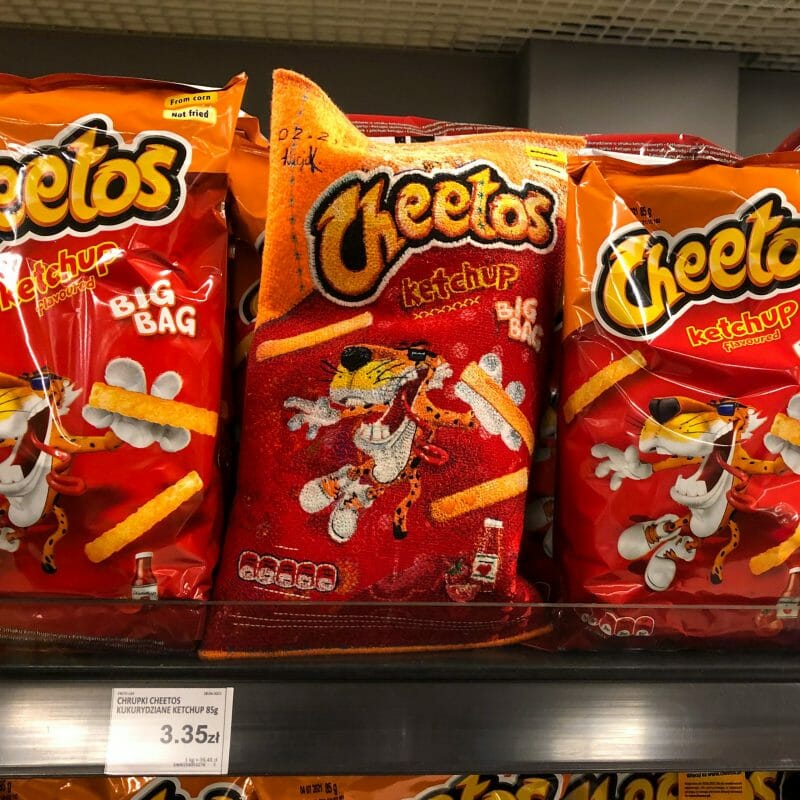 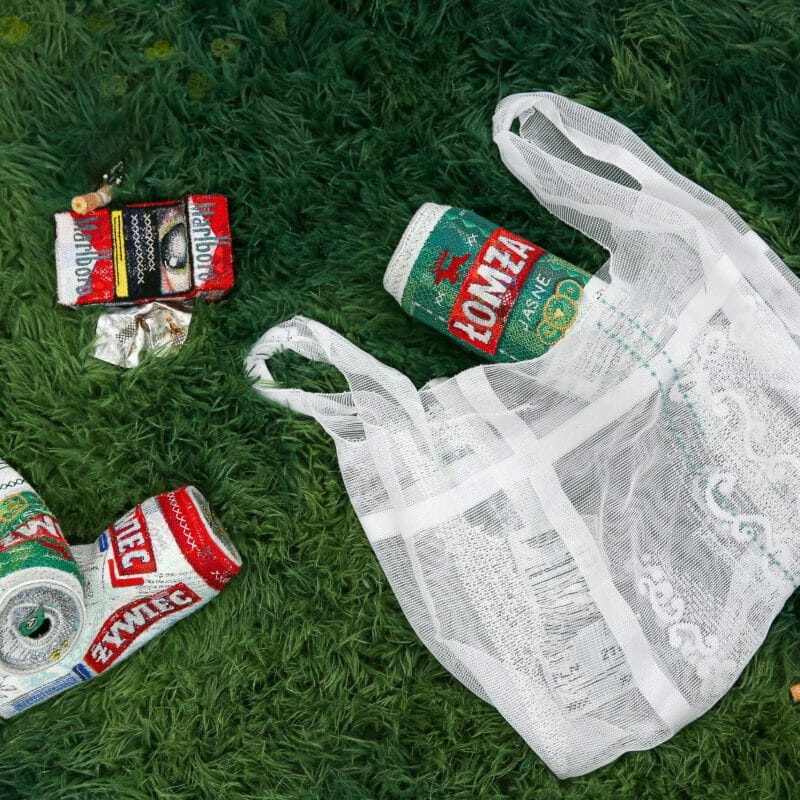 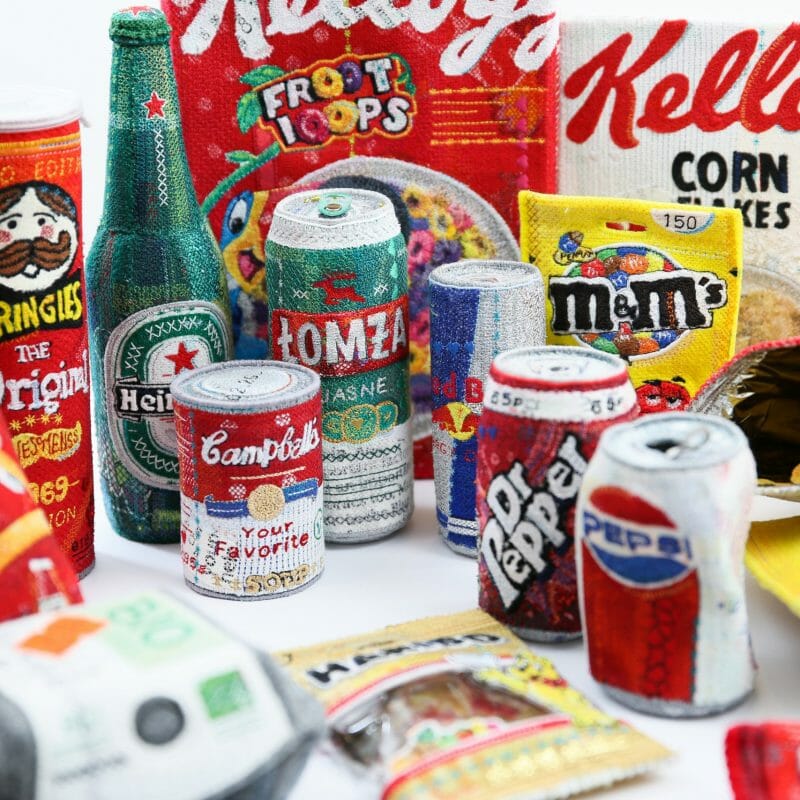 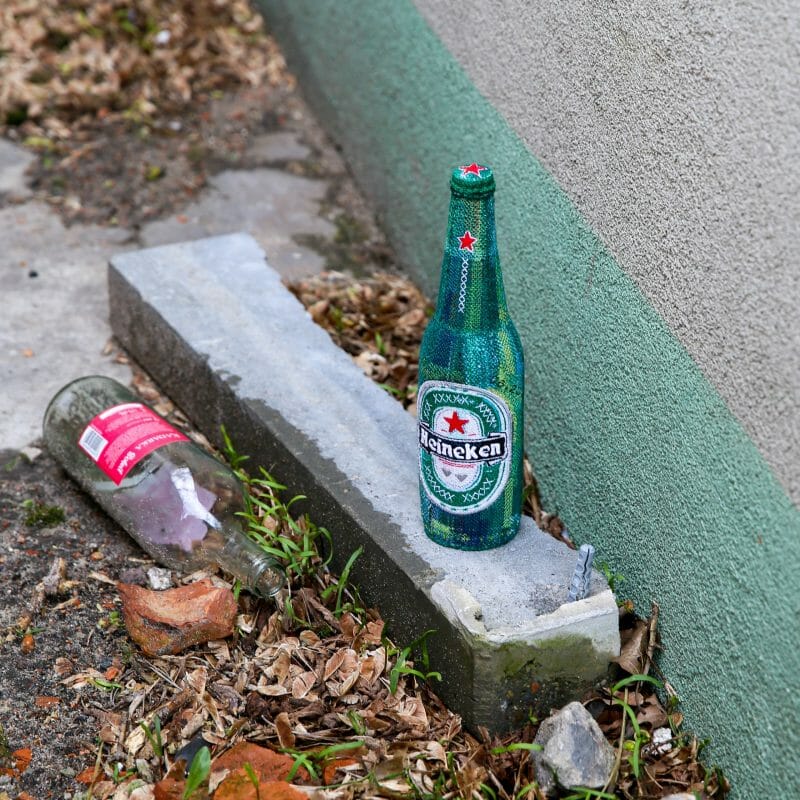