Alto Liccio – Tapestry between past, present and future 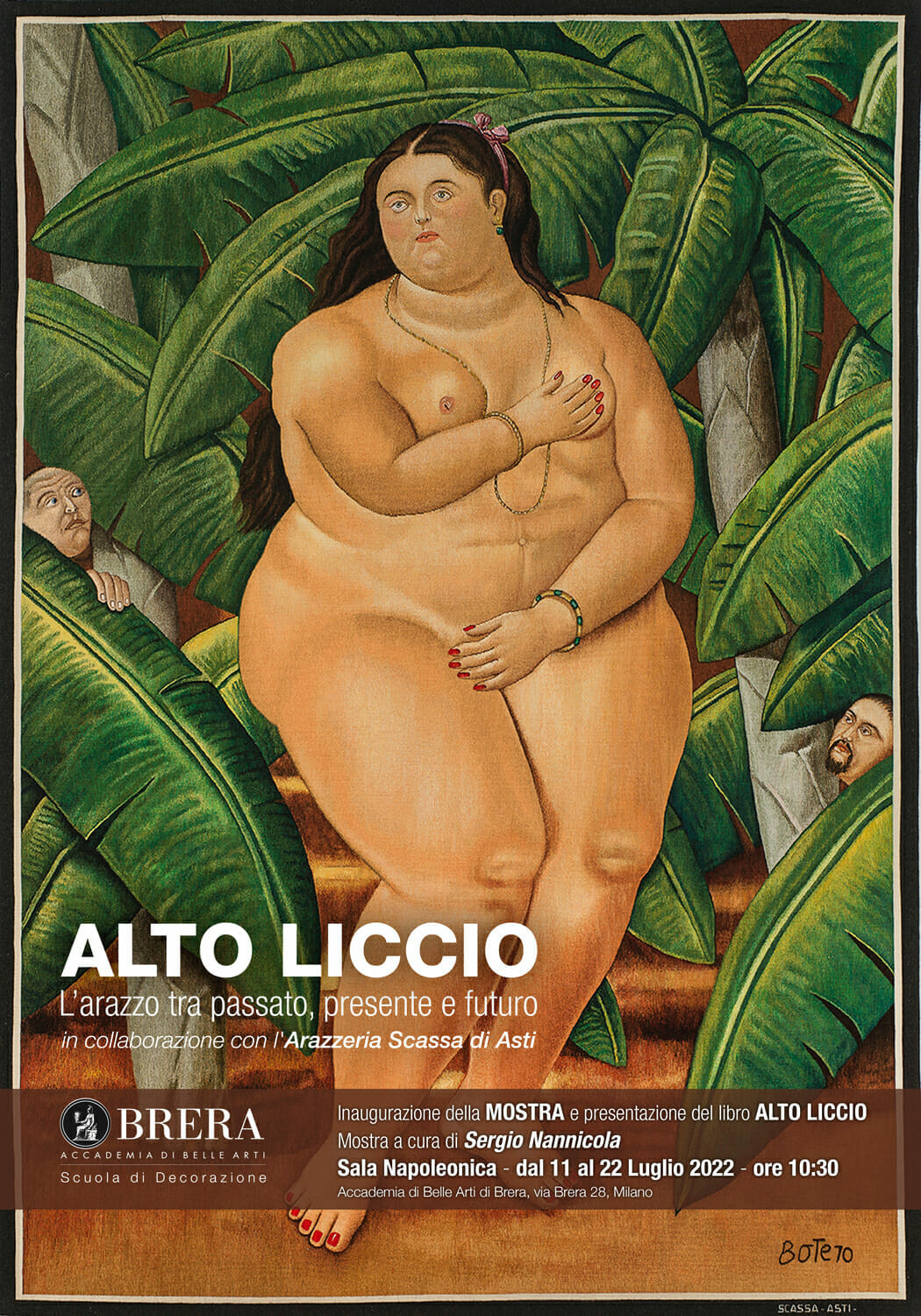 The Brera School of Decoration
Exhibition curated by Sergio Nannicola
Sala Napoleonica, Via Brera, 28 Milan MI
FROM 11 TO 22 JULY 2022

On Monday, 11 July 2022, the exhibition “Alto Liccio – L’arazzo tra passato, presente e futuro” will be launched at Brera Academy of Fine Arts’ Sala Napoleonica in Milan. This exhibition results from a Brera School of Decoration project in collaboration with Arazzeria Scassa, Asti. The event is implemented and coordinated by Sergio Nannicola, a professor at the academy mentioned above. The exhibition traces a learning experience born online during the pandemic and accomplished in the Asti Tapestry workshop between 2020 and 2022, within the prestigious artisan’s laboratory immersed in the ancient Certosa di Valmanera park.

In addition to the small textile pieces produced by the students during the workshops, the exhibition features four high-quality tapestries woven in the historic Arazzeria Scassa, including the beautiful ‘Venus’ by Fernando Botero, made in 2010, ‘Night Flowers’ by Paul Klee from 1990, ‘The Waiting’ by Felice Casorati from 2007, and ‘Chimera’ by Corrado Cagli, 1962. All the pieces were made by Caterina and Franca Alcaro, the renowned weavers of the Arazzeria founded by Ugo Scassa at the end of the 1950s and lent for display by the current artistic director Massimo Bilotta. Today, the highly crafted tapestries are jealously kept in the Tapestry Museum’s permanent collection at the ancient Certosa di Valmanera in Asti, which survived the war in the 1940s.

Twenty-three girls were selected by a special commission that assessed their designs’ feasibility to be made in a week-long workshop, during which the small tapestries, measuring 25×25 centimetres, were woven using the high heddle technique, under the guidance of Caterina and Franca Alcaro. This experience led the students to measure themselves with this ancient form of art-making, which today, amidst countless vicissitudes, is in danger of disappearing from the scene of highly prized Italian handicrafts; given that, in Italy, workshops such as the one in Asti are increasingly unique rather than rare. With this in mind, we wanted to open a reflection on those ancient and precious artistic disciplines that, for years, have been silently sliding into oblivion, disappearing one after the other from daily practice. This is due to that short-circuit generated between analogue and digital worlds, which has somehow initiated those processes of dismantling visible in various craft sectors, inappropriately considered obsolete by politics. All in the light of a general disinterest reinforced by short-sighted reforms that currently penalise even artistic training in the same public secondary schools.

Our thanks go to the President and Director of the Brera Academy of Fine Arts, Dr Livia Pomodoro and Prof. Giovanni Iovane. The Department Director, Prof. Roberto Priod. The Director of the School of Decoration, Prof. Maria Cristiana Fioretti. The Coordinators, Professors Sergio Nannicola and Barbara Giorgis.