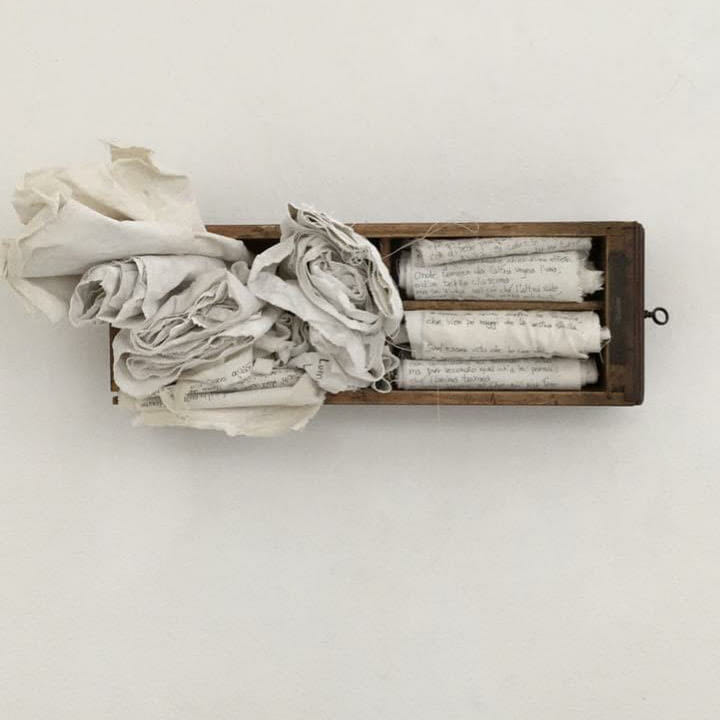 The meaning of this exhibition nestles among the many folds of ancient linens and worn fabrics that make up her works. Monica Giovinazzi’s research explores the restlessness of the man who is confronted with his own fragility, the fleetingness of the moment, the impermanence of his own existence, the precariousness of the substance of which life is made.  Unfolding them reveals the theme and the leitmotif of a path that starts from the first of Reiner Maria Rilke’s Duino Elegies, of which the artist shares the interpretation of the angelic figure, and through the word – poetry, philosophy, literature – reaches up to separate intelligences, the angelic natures of Dante in Convivio.

A cultured, deep and refined intellectual, emotional and spiritual ‘path’ that winds through the soft pages that become wings or books or lumps hovering on sharp blades, where the words take on the ambiguous appearance of an embroidery; thoughts, fragments of an anthology of the mystery, the attempt to shed light in the darkness of the abyss into which all men, in every age, have tried to look.

In that indefinite territory between visible and invisible man has often invoked the presence of entities capable of inhabiting both worlds, the known space and the immensity of the unfathomable, figures that in the mediation between one and the other brought consolation and hope for the frightening loneliness of the human hybrid awareness. Men have imagined and written about angels for centuries, giving them different shapes, names and attributes, giving them divine, ideal, metaphorical, spiritual nature, portraying them now faithful traveling companions, now protectors against the dark forces or, again, personification of lost affections; always messengers between the real dimension and another and somewhere unknown and uncertain and finally hopefully possible.

Monica Giovinazzi is a performer and visual artist, founder of the KulturVerein RoteHaare in Vienna, collaborates with the Italian Cultural Institute, the Italian Embassy and the University. She is the founder of the Raabe Unla association for the fight against illiteracy, a body that since 2000 has been carrying out training projects for all ages, in collaboration with schools of all levels, universities and other associations and organizations.  Partner of the Centro Donna Lilith in Latina where she promotes training workshops, participatory art installations and performances. She is part of the art collective L’Albero delle Farfalle 2020 with which she created and exhibited artist’s books in Gubbio, at the Museum of the Scriptures in Bassiano and at the State Archives of Naples. Her performances and artistic projects have been exhibited in Italy, Austria, Slovakia and England. Among the many, the Kantor project in Rome and Vienna in collaboration with Cricoteka Krakow and the Polish Cultural Institute; Europe on the scene, European project with the IIC of Vienna and 24 other European cultural institutes, in different languages ​​and in collaboration with the Academy of Fine Arts in Rome; and in London Love and Terror in the Wind by Briceno Guerrero. She lives and works in Vienna.