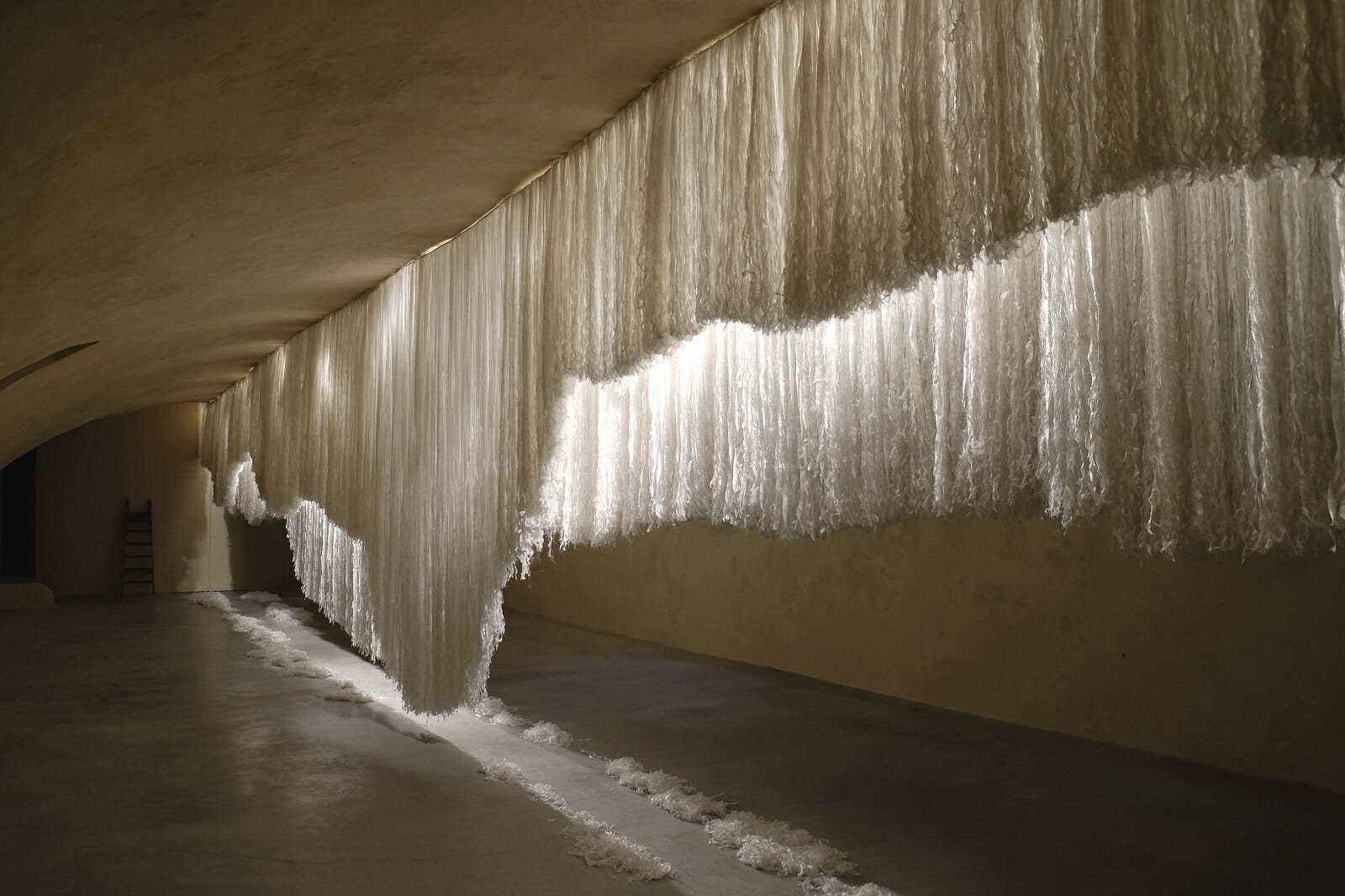 Ph.credit Pual rosso, MPISU AND CARTOFRAMMA BLU – by RAUL ZINI 2014 referring to the exhibition at the Casa Dugnani gallery

Daniele Papuli interprets the paper material (and similar in terms of its flexibility and tactile quality), amplifying its sculptural and scenographic possibilities to obtain evocative works capable of offering the user an absolutely authentic and original sensory experience. “I proceed like an explorer, manipulating and choosing different materials, attracted by their potential and characteristics” he says, speaking of his research on materials.His ‘objects’ are made up of minimal ‘modules’ – strips, lamellas, ribbons, threads – to which a game of overlapping and juxtapositions gives a dynamic and articulated structure, always suggesting to the artist new combinations, applications and integrations of other natural or synthetic materials. For its flexibility, strength and texture, he chooses, for example, the rigid plastic string used for packaging and for reams of paper and newspapers (the strap), reducing it, multiplying it and placing it side by side, to transform it into the corolla of a vase. Or hand weave it into a basket combining an archaic technique with a contemporary industrial material.

PUALBLÙ 2014 Tapestry diam. Cm.300, made with blue polyester ribbon. All objects, sculptures and installations are handmade by the artist, with the aid of a simple cutter or scissors. PUAL is a numbered and signed multiple. The installation is suspended or on the wall. The polyester fiber webbing, used in the fashion accessory sector, is framed, mounted on an aluminum semicircle structure, sewn and fringed by hand. PUAL is an etymological and formal association between “pois” – circle and “poil” – hair, in this case thread.

In the same perspective of experimentation and investigation of materials, he frays the synthetic fiber ribbon used in fashion accessories, bringing it back to its original size of thread and then transforming it into a large circular tapestry.

Daniele Papuli plays with matter, deconstructing and rearranging it, giving it new forms, supporting its physical characteristics and interpreting its evocative figure to give us back a universe where the total freedom of the imagination finds its only limit in the perimeter given by a precise design and a technique of refined execution.

Papuli’s fantastic vision breaks down and reassembles sheets, shapes and volumes through daring cuts, folds and joints, transforming objects and spaces into a fantastic another and elsewhere, sculpting the reality in which we are immersed and leading our gaze beyond the visible and the perception of the real form of things.

The unveiling of possibility is the magic figure of his works: from the smallest object to the most spectacular of installations, nothing is what it seems and at the same time it seems that everything is possible. “I am a sculptor and I converse with materials, space, places” he says of himself. And with us – I add – or at least with that part of us that still knows how to feed on grace, dreams and lightness.

Daniele Papuli, was born in 1971 in Maglie, Puglia. After graduating in Sculpture at the Brera Academy of Fine Arts, he settled and worked in Milan. In 1993 he attended an international workshop in Berlin where he learned the methods of making paper which within couple of years became his material of choice, the medium he felt most suited to his own language. From the experimentation in the production of hand-made papers he arrives in 1997 to the first sculptures realized through lamellar compositions obtained from manual cuts. In the same period he collaborated with the publisher Vanni Scheiwiller in the production of sheets for an art book in 300 specimens.

STISA, installation made with 8,000 meters of white flexible polypropylene strap, cut, folded and tied by hand, mounted on a painted iron structure

STISA, installation made with 8,000 meters of white flexible polypropylene strap, cut, folded and tied by hand, mounted on a painted iron structure

Experimentation around new materials, albeit similar to paper, led him to continuous interconnections between sculpture, design, installations and set-ups for major brands in the fashion sector. To the latter belong the windows of the Missoni store in Milan (2000) and, on several occasions, for Maison Hermes in Milan and Rome (2005 and 2009).

In 2007 his objects, proposed in numbered editions or unique and self-produced pieces, enter the world circuit The New Italian Design promoted by the Milan Triennale for which, moreover, in 2009, he designs and realizes the installation for Paper Jewelery, also designing one of the six handmade paper pop-up jewels attached to the catalog.

The following year his sculpture cards are exhibited at the Calderara Foundation in an exhibition curated by Luciano Caramel and Kengiro Azuma and in 2011 at the Flux Laboratory in Geneva he presents four installations for dance performances built ad hoc. In the following years – until today –  he creates installations, exhibitions and workshops collaborating with various public institutions and international brands. In 2017, the Colossi Contemporary Art gallery in Brescia dedicates to him the personal The era of paper forms and visions while the Stefano Forni Gallery in Bologna sets up Visionomie.