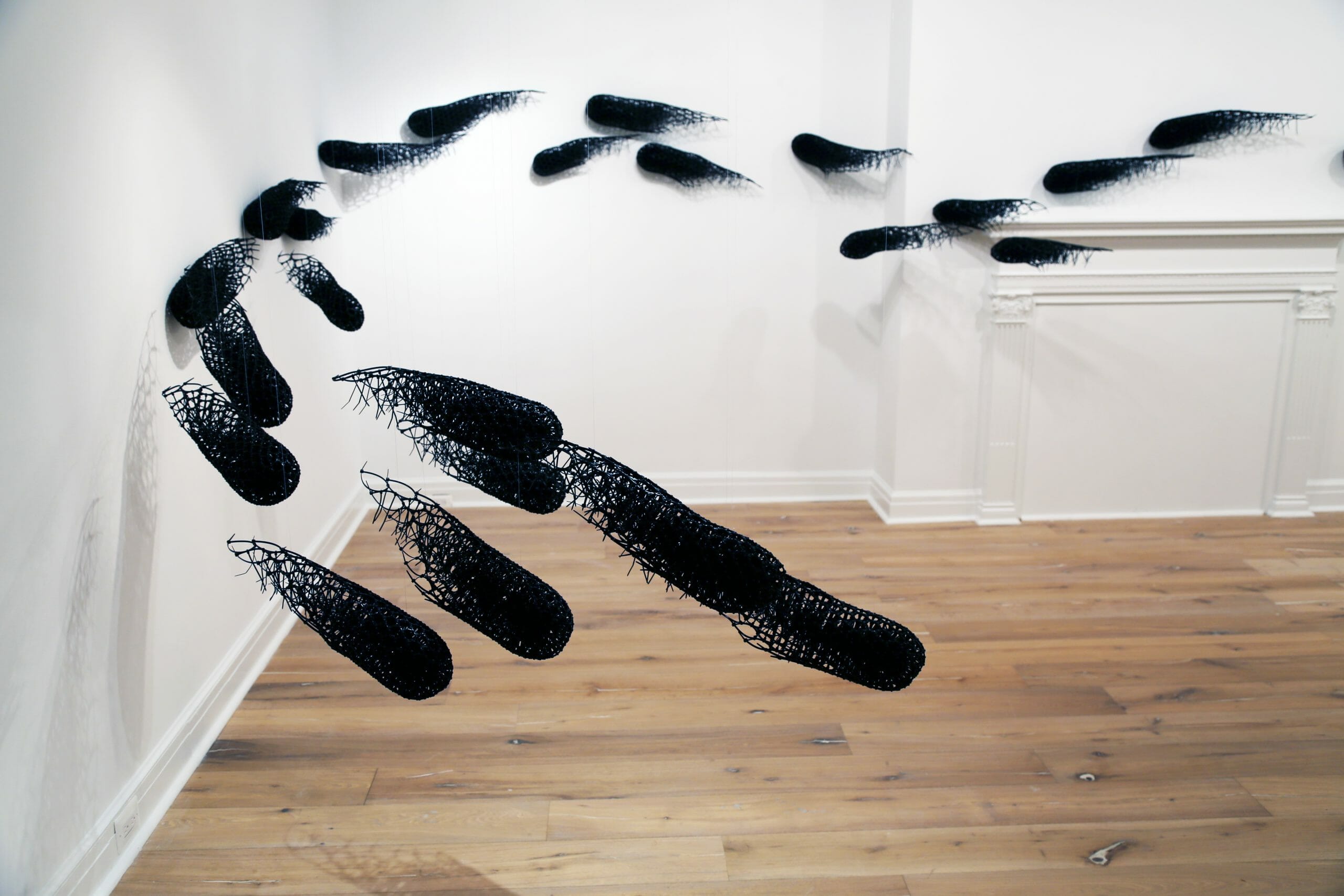 The international textile art exhibition “Asia Europe 5” opens its doors on February 19 and will be open until the end of May 2022. For this fifth edition, TAMAT Museum of Tapestry and Textile Arts in Tournai (B) confirms its collaboration, as happened in 2019, with the Musée des Arts de la Marionnette. For its part, the Manufacture of Roubaix (FR) is taking part in this international adventure for the first time.The exhibition features the works of 36 contemporary Asian and European artists. The creations are made using various techniques from everyday objects, organic elements as well as technologies based on 3D printing.

The exhibition highlights the essence of the works, namely their formal and technical aspects allowing the public to participate in a coherent and aesthetic visual experience; but it also connects two distant continents, marked by cultural, geographical and political differences but where artists, nourished by essentially opposite environments, ultimately express themselves in similar visions.

In Tournai, Belgium, “Asia Europe 5” is divided into two parts: a first part focuses on TAMAT with 35 artists, a second part at the Musée des Arts de la Marionnette, where Dani Tambour’s creations interact directly with the permanent collection.

Finally, in Roubaix, France, the Manufacture of Roubaix hosts a series of small works – mini-textiles – visible in the permanent exhibition of the Museum and created by the artists of the 2022 selection.

THE CONCEPT OF “ASIA EUROPA”

In 2009, Erny Piret came up with the idea of ​​creating a dialogue between Asian and European modern textile art. The origin of his curatorial work is his collaboration in the construction of the V International Triennial of Tapestries of Tournai in 2004, for which the host country was Japan.

As part of Asia Europe, he wanted to link the richness of the innovative imagination of Asian and European artists on the principle of personal research in the field of textile art. The idea was transformed into reality becoming a real formula of considerable success, as evidenced by the previous editions in Lithuania, Germany, France, Poland, Denmark and Belgium (Asia Europa 4 in 2019).

This fifth edition was exhibited for the first time at the Kouvola Poikilo Art Museum in Finland and will stop in Belgium and France during the spring of 2022 to then continue its tour at the Dronninglund Art Center in Denmark and the Textile Museum of Krefeld, Germany.

The coordination of “Asia Europe 5” is managed by a duo of curators / artists, Raija Jokinen (Fi) and Marika Szaraz (Be).

The artists participating in the “Asia Europe 5” exhibition have a solid understanding of traditional techniques used in textile art and artistic practices, and the exhibition demonstrates that they also have the ability to develop new and unique works of art, both visually and technically.

CREATIONS WHOSE LANGUAGE IS THE TECHNIQUE

The vision of Erny Piret, first curator of Asia Europe, on the art of fabrics and fibers presupposed works for which the artist used exclusively the technique to express himself.

In addition to raw materials, the work process is still of great importance in this fifth edition. The techniques used are often simple: weaving, sewing, embroidery, twisting, knotting, cutting, or even collage. The points of convergence are repetition, the slow pace and the time dedicated to the creation of the work.

Focusing on one’s universe, in this case a world created from matter, technique and the resulting work of art, often leads to philosophical reflections on issues such as the intersection between materiality and spirituality, values, the environment and nature.

There is no defined theme in this exhibition, determined by choices dictated by the sensitivity of the curators: the desire to show very varied textile creations using equally different materials and techniques, the interest in the technical process, and often for a certain austerity of monochrome works, intuition of the new paths borrowed from the artists …This journey through the world of softness is a sensitive journey into contemporary textile creation. Whether they are wall-mounted works, suspended works, installations on the ground or on pedestals, their presence within “Asia Europa” was therefore a choice that is part of a whole whose criteria are essentially based on technical innovation, sculptural form, transparency, sobriety. Presenting a group exhibition that is nevertheless harmonious in its conception and presentation has been an absolute objective since the first “Asia Europa” edition, which has remained until today.

From the first edition of “Asia Europe” in 2011, organized in Angers, at the Jean Lurçat Museum, nature is still the main source of creativity and inspiration at different levels. Artists use natural materials or organic elements – such as roots, gorse or flower stems – to create their works. The influence of nature can also be perceived more abstractly in personal impressions or memories of unforgettable natural phenomena.In every museum a relationship is established between the visitor and the works: it is not verbal but immediate and exclusively visual. The logic developed in the concept allows a fluid and instant reading. In every country, in every museum, for every visitor, the perception is different and this is a continuous enrichment also for the artists.