BEHIND THE SCENES OF THE BIENNALE OF FIBER ART IN SPOLETO 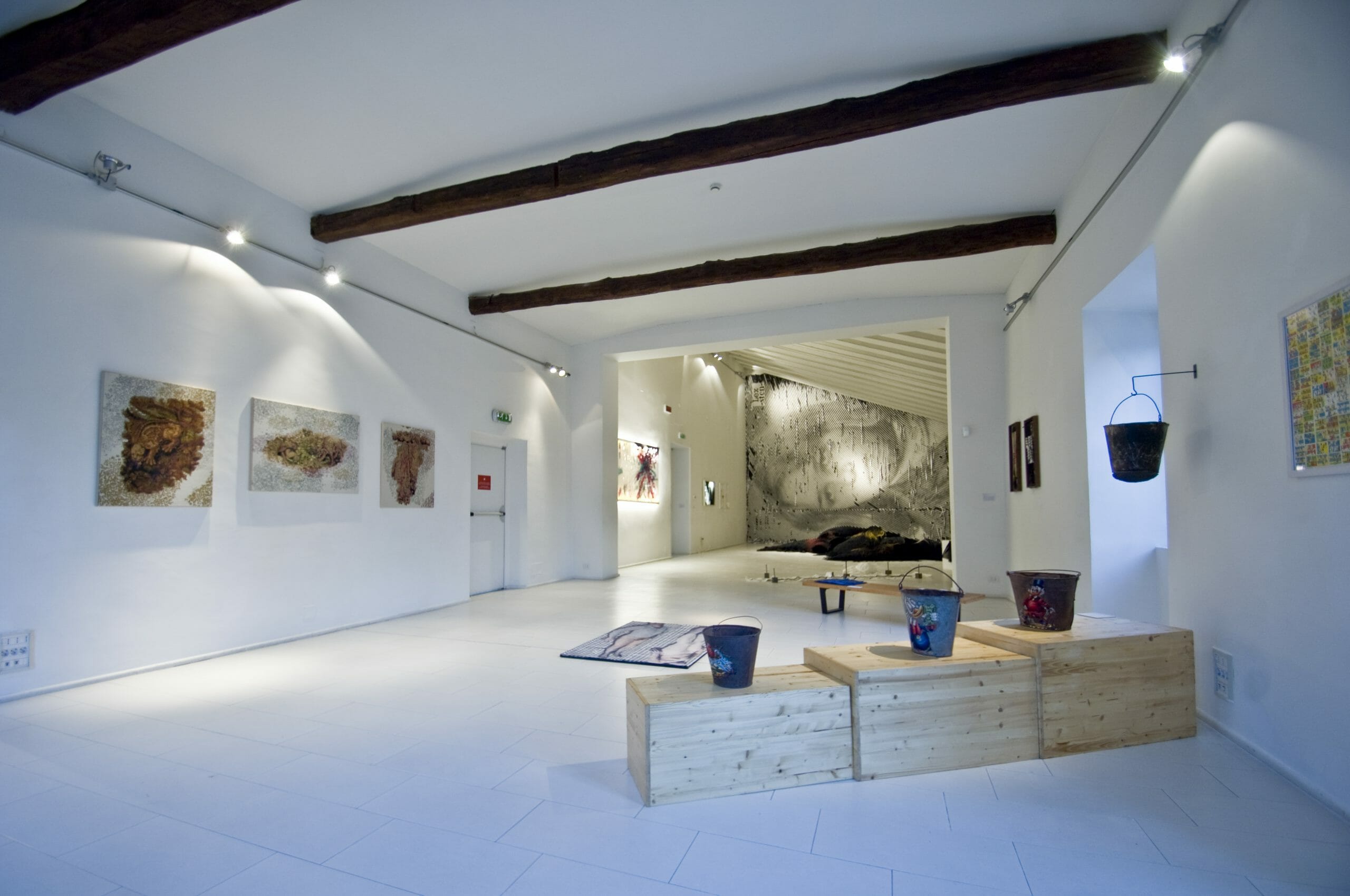 Waiting for the second edition of the Biennale of Fiber Art in Spoleto which will open in a few weeks, I wondered who is behind this event that brings to the Umbrian town a widespread international exhibition set up in different locations, with site specific installations and interventions by artists from different backgrounds. So I met and interviewed Maria Giuseppina Caldarola and Pierfrancesco Caprio, creators and coordinators of this project, who with the Cultural Association Officina d’Arte e Tessuti, despite pandemic and difficulties, managed to give shape and life to this new prestigious event

Today, when Fiber Art has finally gained space due to the language of contemporary art in galleries and trade fairs as well, specialized exhibitions are multiplying. However, promoting and organizing a Fiber Art Biennial a few years ago and, moreover, in a small town far from the metropolis at the crossroads of the flow of the art market, was undoubtedly courageous and visionary. How did the idea come about in unsuspecting times and why did you choose Spoleto?

The answer is partly inherent in the question itself. We have chosen Spoleto also because it is far from market flows. But not only.

When you get off the train, in the station square you will find a great work by the great artist Calder, the “Teodelapio”. We believe it is the only municipality, at least in Italy, where one is welcomed by such an important work of art. Spoleto is a center of culture.

Just think of the “Festival dei due Mondi”, founded by Giancarlo Menotti in 1958. At that time, it was unique in its genre and we could define it as polythematic. Even today the Festival is alive and creates new shows and new cultural opportunities. But Spoleto had its own penchant for art even before the Festival. For example The Spoleto group,formed by artists such as Toscano, Raspi, De Gregorio, Rambaldi, Marignoli oriented towards the informal and above all Leoncillo, a great interpreter of art without adjectives, also active on a social level.

In short, we have found a favorable and receptive environment, in a place of great architectural, urban and historical value. On the other hand, it is a circumstance that is present throughout Umbria. Just think of Todi, Assisi, Città di Castello where Burri’s work is present.

Last but not least is the tradition of textile works in Umbria. Where there are numerous small museums about it. A heritage of great value.

We had a little courage. But we believe that Spoleto was the right choice.

As for the selection, this happens in two ways. For the Academies it is exercised by the teachers, having a fixed number of presences. The other artists are invited by our association and it is the association that exercises the selection.

What are the objectives of the Biennale and to what extent do you think that they have already been achieved or will be achieved in this edition?

Given that for us the Biennale is a contribution to the transmission of knowledge,the main goal is to raise awareness of Fiber Art, also in connection with other artistic expressions mainly with music. It is no coincidence that the Biennale opens with a concert. But also in regard to music one of our goals is to make contemporary music known, too often neglected in the official concert programs. We will probably use the same model used for Fiber Art with music. That is to address the educational institutions, in this case the Conservatories.Organize musical seasons together, without neglecting other types of concerts. It should be emphasized that we are not new to the organization of concerts. In fact, with the Officina d’Arte e Tessuti gallery we have, since 2013, organized annual musical seasons that usually opened on March 8 to coincide with International Women’s Day and closed in May

The interest we have found in the exhibitions, but especially in the Biennale, gives us hope for the future. Even if the road is long and bumpy. In this edition we hope to culturally reinforce the biennial, also for this reason we have entrusted its organization to the Association, which will allow us to be more present on the cultural and artistic level.In short, we take care of the desire to also be a point of reference for the art system, placing ourselves outside the commercial factors that distort what art must be. That is to say the Art that conquers chaos, bringing thought back to light.

What were and what are the major difficulties you had to face – and which ones do you still face – for the realization and promotion of this event?

The economic and logistical difficulties in organizing cultural events are always present. In our case, after many years of exhibitions organized in galleries and in public spaces, we now find ourselves aspiring to a permanent space dedicated to the Biennale, whether public or private.It is no coincidence that the oldest Fiber Art exhibition initiatives are also those that have a permanent space available, because at least one element of continuity is always present and this ensures some primary certainties. As regards the more specifically economic aspects, the issues are complex, also because it is difficult to rely only on one’s own resources. Something is moving on the horizon and we are confident.

Who is the visitor to the Biennale and what has so far been the response from the public and the feedback from within the art sector?

Starting from 2013, from the solo show of Lydia Predominato, we had the opportunity to notice that the public, with some prevalence of women, is very attracted to Fiber Art. Foreigners are very much so, perhaps because they are more used to it, to this artistic expression.In any case, if people are also “guided” by some explanation and story, they are always grateful and grateful for having learned something, at least felt some emotions. Many people are intrigued and ask for technical details. In general, everyone shows an attitude of awareness, they do not “suffer” the images as something detached from themselves. This is also an element of satisfaction for the organizers.Within the artistic sector we always find positive feedback, almost a recognition for a work that promotes an artistic creation not very present in galleries or public exhibition spaces. More complex is the aspect of the art market for these artists. However, there are positive signs at an international level and therefore we hope that there will also be a progressive appreciation in Italy. In our gallery we have found it on several occasions.

This event has been a great success since the first edition. What has changed in the meantime, from your point of view and what are the novelties of this edition?

This issue is important, in fact the problem arises of what happens between two years and the next. We have had the pandemic, and this has had some consequences, from a logistical point of view, of course, but also with regard to the conceptual approach.In the end we decided not to change anything of what we had foreseen and to present the works created as a memory of a particular moment in the existence of all of us and at the same time as messengers of rebirth and of the future. It is a review that will give an account of a “before” and an “after”, from which to start over.Furthermore, it must be said that we were waiting for this second edition to make a first evaluation of what has been achieved, in terms of general and specific objectives. Functional at the time of evaluation and criticism was the establishment of the Officina d’Arte e Tessuti Association, to which the Spoleto gallery of the same name passed the baton as regards the organization.A fundamental need is to share the themes to be developed at each edition in a larger group, collect hints and ideas, expand the synaesthetic aspect, with contributions from musicians and poets.

What do you think is the most interesting aspect of the Biennale? What would you say to a hypothetical visitor not used to attending art exhibitions who would ask you the reasons why he should visit the Biennale?

It is the presence of established artists together with Academy students, people who, despite not having a specific artistic training, if guided by an artist with a strong commitment on a moral and social level, are able to express an increasingly conscious creativity. This is the example of the Venetian Verdeaqua Group created by the artist Anna Moro Lin, invited in the previous edition. In summary, we can say that we feel fully in tune with some of Christine Macel’s statements:

Art is “a garden to be cultivated beyond fashions and specific interests, in short, an alternative to individualism and indifference” Macel affirms and continues, referring to the 57th Venice Biennale: “It is an exhibition with artists, by artists and finally for artists on the forms that are proposed on the questions they raise about developing practices and ways of living.”1

In summary, a “Biennial to get to know”: what better way to decide to visit it?

What are the plans for the future? And is there a ‘dream in the drawer’?

“Biennale all year round” is the idea developed during the confinement period. In the absence of contacts and opportunities to meet, we realized the need to activate different channels of communication and to create moments of in-depth study, exchange and discussion on the issues that are dealt with within the Biennale.We think of personal exhibitions to be hosted in our Spoleto gallery to deepen the knowledge of a series of artists who, when invited to the Biennale, can show only a minimal part of their artistic production. The gallery thus becomes an opportunity to host these Focus. Not the only opportunity. In fact,  CAOS of Terni  offered us  the possibility of using their exhibition spaces for the same purpose.We are very happy with this collaboration also because we have already worked with the artistic and scientific director Pasquale Fameli, who is the curator of the RIZOMATICA space present in the first edition of the Biennale. He is also an academic and this for us is a condition that ensures that we always maintain a profile of sufficient quality.