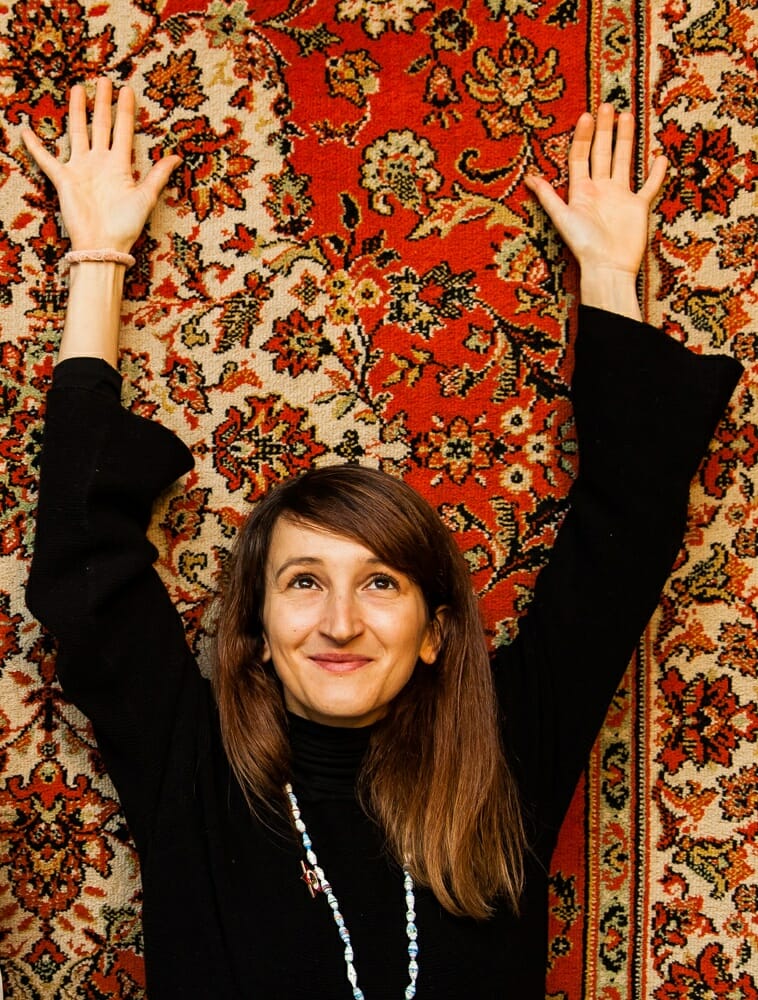 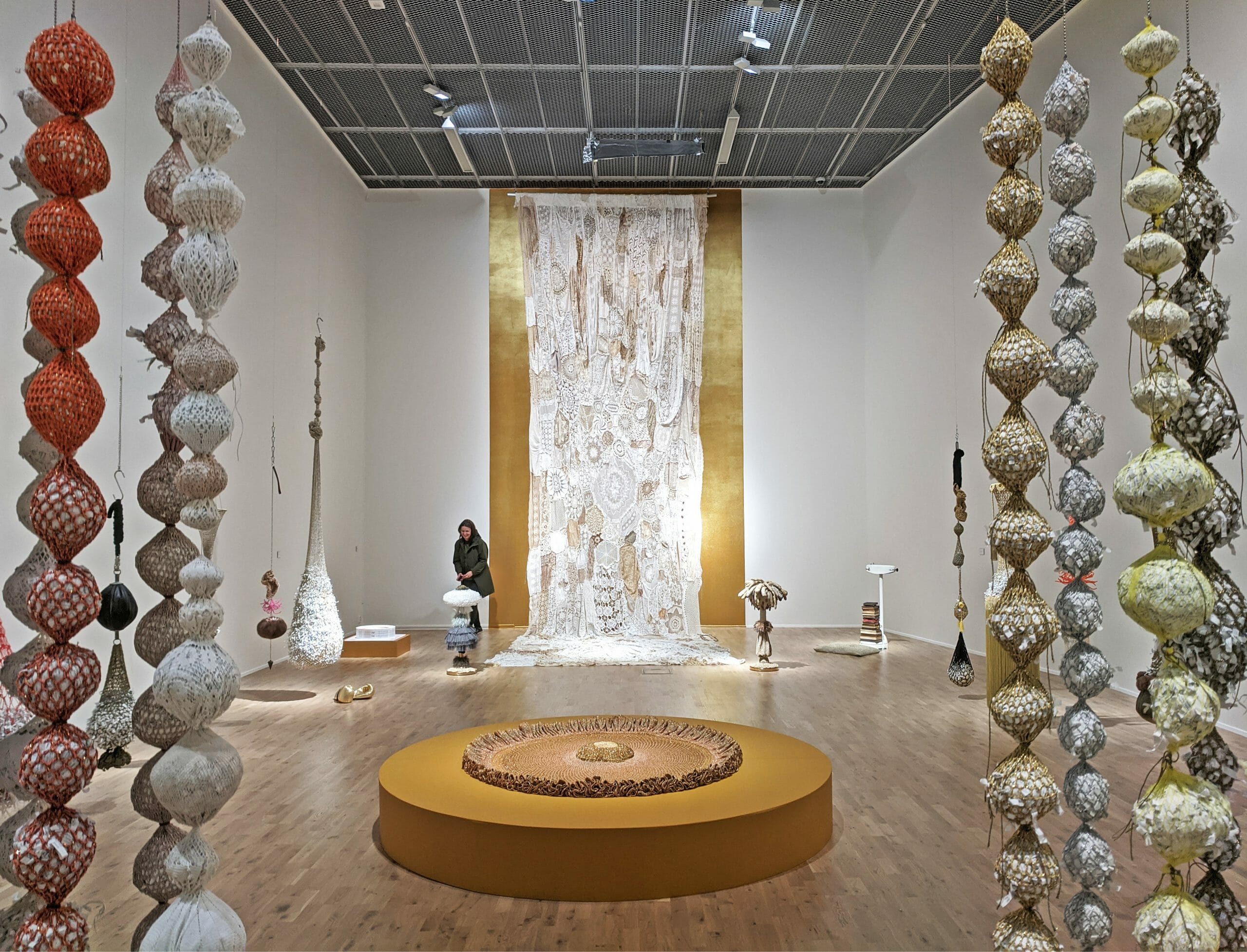 “I don’t mean to provoke, but I see how filling a punching bag with shredded bibles it’s a very aggressive action”.

“My artistic work may hurt the feelings of some. However, I want to raise questions, create curiosity and new thoughts among those who experience my exhibition”, says the artist.

With her exhibition ‘Falling sky’ (Fallande himmel), Birgit Eide leads us to discover stories that are difficult to tell, to a relief that lies beyond prohibition, guilt and the Christian notion of sin.

“Quiet” detail from the inside of a punching bag, Ph Credit: Birgit Eide

«The exhibition halls of Sogn og Fjordane Museum of Art are literally transformed into the sacred space of a church. Eide’s narrative unfolds over three conceptual areas:

“The armoury”, in the Norwegian wooden churches, this room is located in front of the main entrance. According to medieval custom, the men would leave down their weapons before entering the church sacred space.

In her armoury, Birgit has decorated the walls with hand-embroidered church pictures found in second-hand shops. The embroideries have been marked with red spots. This series is called “Outside” (Utenfor). She installs an ecclesiastical tablecloth on the sidewall ending in a semicircle made up of children’s hymnbooks used in Sunday schools. An excerpt from the lyrics of a hymn is embroidered on the tablecloth: “Be careful what you do, little child.”

“Guard” (Vokter) outside the armory. On the right wall “outside” (Utenfor)

“The Altarpiece” is perhaps the most impressive piece in the exhibition. The idea of hanging the work down from the ceiling, facing the seven-meter-high front wall, was immediate for the artist upon seeing the exhibition room. Its size and spatiality allowed her to relate to the theme of paradise.  The work measures 3 x 10 metres and is made from decorative tablecloths crocheted by unknown women and sewn into a single piece. For the artist, it is essential to pay attention to the women behind all that work. Eide is interested in how women, through times, have decorated their homes with beautiful textiles. Many people have great joy and pride in their handiwork. Through her work, Eide tries to elevate this tradition. The aspect of time is crucial and raises questions of values in our society. Why do handmade textiles, embroidered pictures and bibles end up in flea markets and second-hand shops?

“The Pearl Gate” consists of 90 long chains of “pearls” made from crocheted nets, tits feeders and onion nets; filled up with pages from the Bible. The artist sees the beauty that lies in old, used materials, and she’s not afraid of bringing them in conversation with pieces of refined craft.

The 12 punching bags hanging from the ceiling filled with shredded bibles are essential to the exhibition’s conceptual and formal dynamics. The punching bags form a colonnade leading to the altarpiece.

Child of sunshine (Solskinnsbarn) in front, Pearl gate (Perleporten) hanging from the ceiling and Outside (Utenfor) on the back wall. Ph Credit: Øyvind_Johnsen

Over several years, the artist has collected used Bibles from flea markets and Christian charity shops.

Her first work made out of Bibles included 13,748 pages. The pages were glued together and rolled up so that they could no longer be opened or read, making the bible text inaccessible.

Ten Bibles are stacked on a bathroom scale in front of a prayer pillow filled with shredded bible pages. Ph Credit: Birgit Eide

Birgit Eide grew up in a strict religious family. Her artistic work is a process of re-elaboration of personal traumas linked to her upbringing.

In an interview for the national newspaper Vårt land[1], she discusses the personal themes behind creating this series of works.

She says: “I thought there was a God who knew every moment what I was thinking and seeing. This is a terrible thing to grow up with as a child. Yet, that song was and still is part of my reality. When I realised its constant presence, I understood many things”. This is the background for the piece “Be careful what you do, little child.”

For ten years, Eide has worked around the topics of religious authority and personal identity. However, her critical message wasn’t immediately perceived; on the contrary, her works were often regarded as ”kind actions”. Subsequently, the artist introduced the stitched bibles and, in 2016, in an exhibition at Kunsthall Grenland, the punching bags.

Through this seemingly aggressive formal representation, the artist reworks her past, staging the concepts of faith, sin and shame.

“For me, these words represent Christianity. Therefore, it is no longer important for me to write them in large letters on the wall as I did in 2013. I have embroidered these three words in Norwegian and then in Latin – the traditional language of the Christian community. I have also embroidered them in English because it is understood by many people.”

The artist does not feel endangered when destroying a sacred book, even if it’s a radical gesture. She says she has never met a Christians for whom her work was perceived as a threat to faith or religion.

“When I started this series, I wanted to make Bibles unusable. I thought: if I buy them, nobody else will. So, in Bergen, I made a large installation where I used Bibles in different languages and boxing gloves.”

She intends to comment on the church’s power and the Christian religion in a country where this is allowed.

“I am very aware of the Christian cultural heritage and the context in which I live. I have friends and family members who are very religious. Everyone is free to believe what they want. I just want to make people think. Many writers have expressed strong criticism of religion, but not many contemporary visual artists do so, strangely enough. I believe the church has power in many negative ways.”

Brigit Eide is aware that there are no more children’s songs like ‘Be careful what you do, little child’ nowadays, but the idea of sin and punishment has not disappeared.

“It has always amazed me that many radical minds can perceive religion as something harmless. For me, it is not. For me, religion can be a strong presence in people’s lives, even if not literally as in the song.”

[1] “Vårt Land” is a Norwegian politically free and independent Christian daily newspaper. The article written by Arne Guttormsen was published on October 12, 2021.