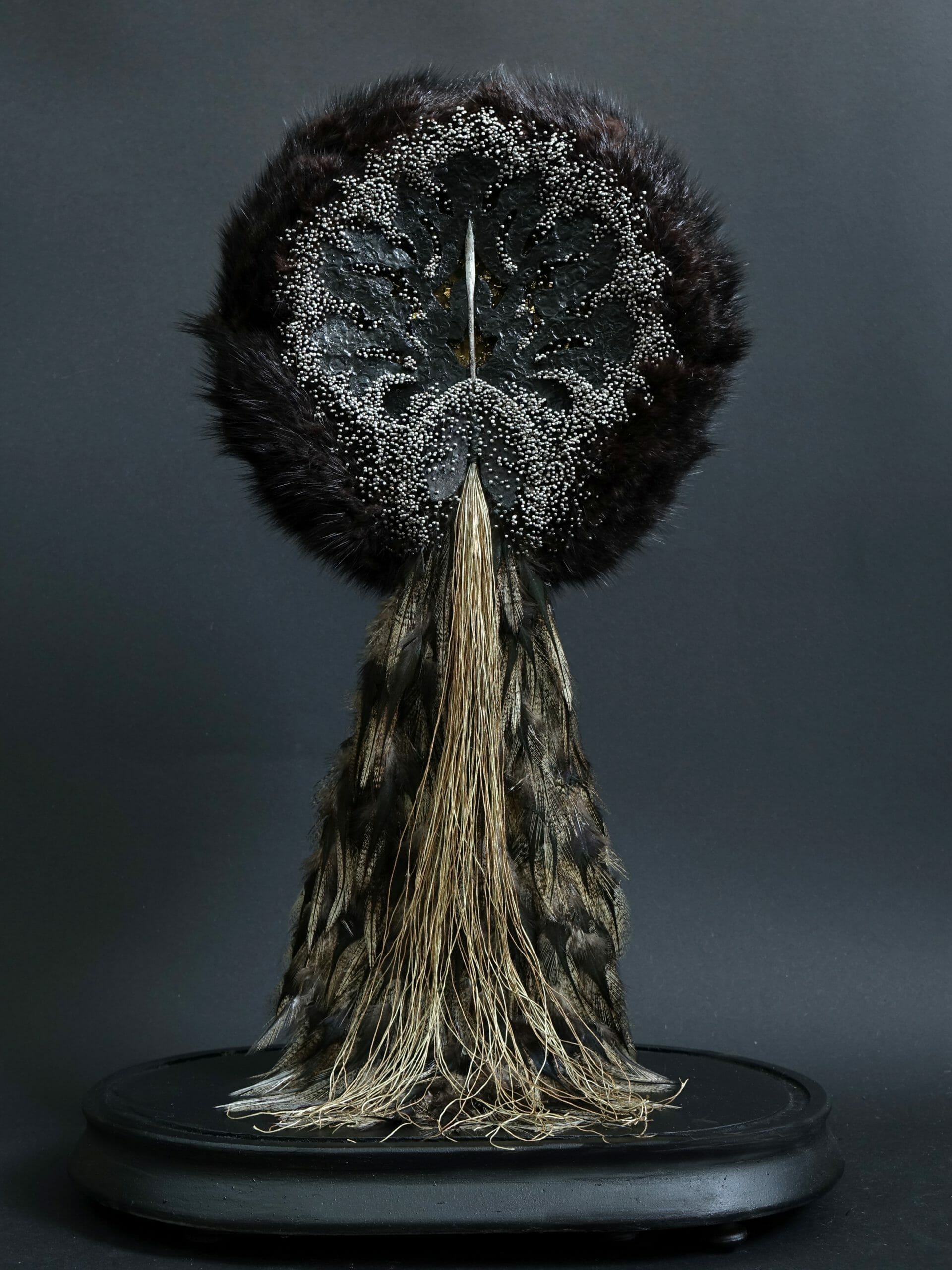 Cathy Hirchenhahn plays with pre-existing elements, old salvaged objects, nature fragments found in their environment, souvenirs of stories and memories emerging from cupboards and drawers, assembling them to create small works that combine the opposites in a mysterious balance of harmony. These miniature universes are on display in several locations nationwide (Strasbourg, Château de Thanvillé, Quimper, Pont-Aven, the Bonne Nouvelle Chapel in Melgen, among others). She will create a participatory work at the Louvre with visitors in the small gallery as part of the exhibition “Objets venus d’ailleurs”

Natural or artificial: which materials do you use for your works, and how do you choose them? How did you start experimenting with them to create works of art?

When I was a student at the Arts Décoratifs in Strasbourg, I graduated in painting by presenting minimalist wooden assemblages. Subsequently, my work evolved based on the encounter with other materials. Today, the hallmark of my work is to mix these raw materials – animal, vegetable, mineral – as well as handcrafted or industrial objects.

My approach involves combining heterogeneous found and collected elements: I constantly look for new textures and shapes. This is the beginning, the common thread, the discovery of a possible infinite and its many combinations.

I tackle opposing and seemingly incompatible elements. I transform them, assemble them, deconstruct them until I find a union, a dialogue, a fusion between the noble and the trivial, between artificial and living things, soft and hard materials, items from somewhere else with objects of everyday use.

Poor materials are elevated to the level of noble ones. Some of those come from the past and cross paths with those of our contemporary era. There are no rules; everything is mixed without any hierarchy. The objects’ essential functions disappear, favouring their shapes, colours and textures. For me, what counts above all is the emotion provoked by the discovery of an object. The interest in its history or function comes later and is part of the pleasure of my findings and their latent potential.

At first sight, your works appear as mysterious primitive ritual objects, capable of conveying primordial forces and communicating with distant divine entities. But are they?

I do not know exactly: this is mysterious to me too. I work very instinctively, intuitively. I make things out of a sort of inner necessity. It puts me in a state of exaltation where there are no limits.

Of course, I have a particular interest in many primitive objects: headgear, tools, masks, but I don’t want to relate to any cultures, symbols, objects’ functions that don’t belong to me. My assemblages are abstract works; I even try to eliminate all connotations and references to existing forms. But an abstract work does not exclude some kind of inner or symbolic image. I have always been accompanied by verticality and symmetry – the latter is present in plants, animals and humans; it organises the chaos of matter and unites opposites.

Similarly, shapes such as the almond and the circle often emerge in my compositions. The almond can even be round or composed of two interlocking circles. These shapes allow me to play with openness and luminosity.

There is a kind of protective coating in my assemblages, which is expressed in the materials and their peculiarities, whether in the softness of fur or in harder or thorny objects. It is not necessarily premeditated, but rather a recurring observation I make afterwards and try to understand.

Nature is very much present in your artistic practice. How do you relate to the natural world, and how much does it inspire your research?

Indeed, nature plays a crucial role in my work. The richness of its organic forms, textures and colours fascinates me. I try to reveal and magnify everything that is not visible at first glance or what has been neglected. I try to find a new world order through an interplay between plants, animals and humans. It is also about questioning the relationship between man and nature, which might seem to be an area of ecology even though it is not. Nature is also very present in all the objects found, collected, recovered from the sea, the undergrowth, and gardens.

many forms and essences. However, there is also the question of life and death present in the natural elements. There is a form of regeneration that I nurture through recycling with the preservation of old, antique objects.

Sometimes they are part of legacies and are bound to disappear: collectors’ items, mementoes from the past that appear from curiosity cabinets (old furs, shells, corals, seaweed). And I have the feeling of giving them a new life.

Looking at your work, one can assume that many of your techniques require time, patience, and precision. But is your ‘art making’ also a Zen exercise after all? How cathartic is art, as an artist but also as an observer?

I increasingly feel a need to take time in my work and refocus.

After the first stage, where the design choices take place and everything proceeds very quickly in searching for various combinations, I like to indulge in a work of repetitive gestures. This is a meaningful evolution of my work because it was originally quite minimalist. I like to get lost in the redundant gestures of ‘pricking’ with pins and nails or even winding the thread. There is something hypnotic about it, meditation, a sense of loss. In fact, I become empty and free; it even becomes an addictive and obsessive action. As for the observer, I really don’t know; it is difficult for me to speak as a viewer. However, I hope that the observers can experience a fascination capable of transporting them elsewhere.

How are your works created and developed?

My workshop is packed with materials that I have collected over the years. I often work on multiple pieces simultaneously; this allows me to take time for reflection. There is a dialogue between the materials and the simultaneous creation. Some parts are pretty fast to complete; others can rest for several months before they are finished. A process that is carried out through long stages of construction and deconstruction until I find a balance that satisfies me. Working with lots of complex materials and matter, I try to simplify things to achieve a synthesis. The forms are arranged to keep the essential lines. I look for a straightforward reading, predictable and plain at first sight. There is not really a consistent technique; it is constantly a matter of finding new solutions that I come up with by adapting to the materials and their specific features.

Some works are kept in a protective glass case. Is this a precaution to preserve them, or does it have a conceptual meaning?

The presentation inside old blown glass bells is indeed justified by a function of preservation and protection; some assemblages can be quite fragile. But they can evoke the typical wunderkammer presentation, strengthening the idea of spatialisation, the intimacy of an object that appears precious and that we want to care for. With the glass jar, there is almost a sensation of retreat into a miniature, expressed by the encounter between the intimacy of the object and the concentration of a contained world made up of heterogeneous materials. These ancient objects were used to protect wedding crowns and religious statues. The work is laid out, waiting, isolated from the world in this protective shell. I never create the work for the glass case, but instead, I look for the most suitable one because the relationship between the proportions of the case and the work is obviously significant.

However, this presentation method is not consistent; my creations can sometimes be placed under plexiglass, in entomological boxes, and without a protective cover, simply fixed on a base or hung directly on the wall.

How much of you is in your work, and what artwork do you identify with (and why)?

I am particularly attached to my most recent works; I need time to easily part with them. Separating from a piece that we spend time with, creating ties with our own history, is never a small thing. Very often, I have a preference for abstract creations; I can’t quite understand the reason for this attachment. It is physical alchemy, which affects the emotional side more than the mind, and all this is quite mysterious to me.