Chronicles from the Fiber Art Biennale in Sardinia 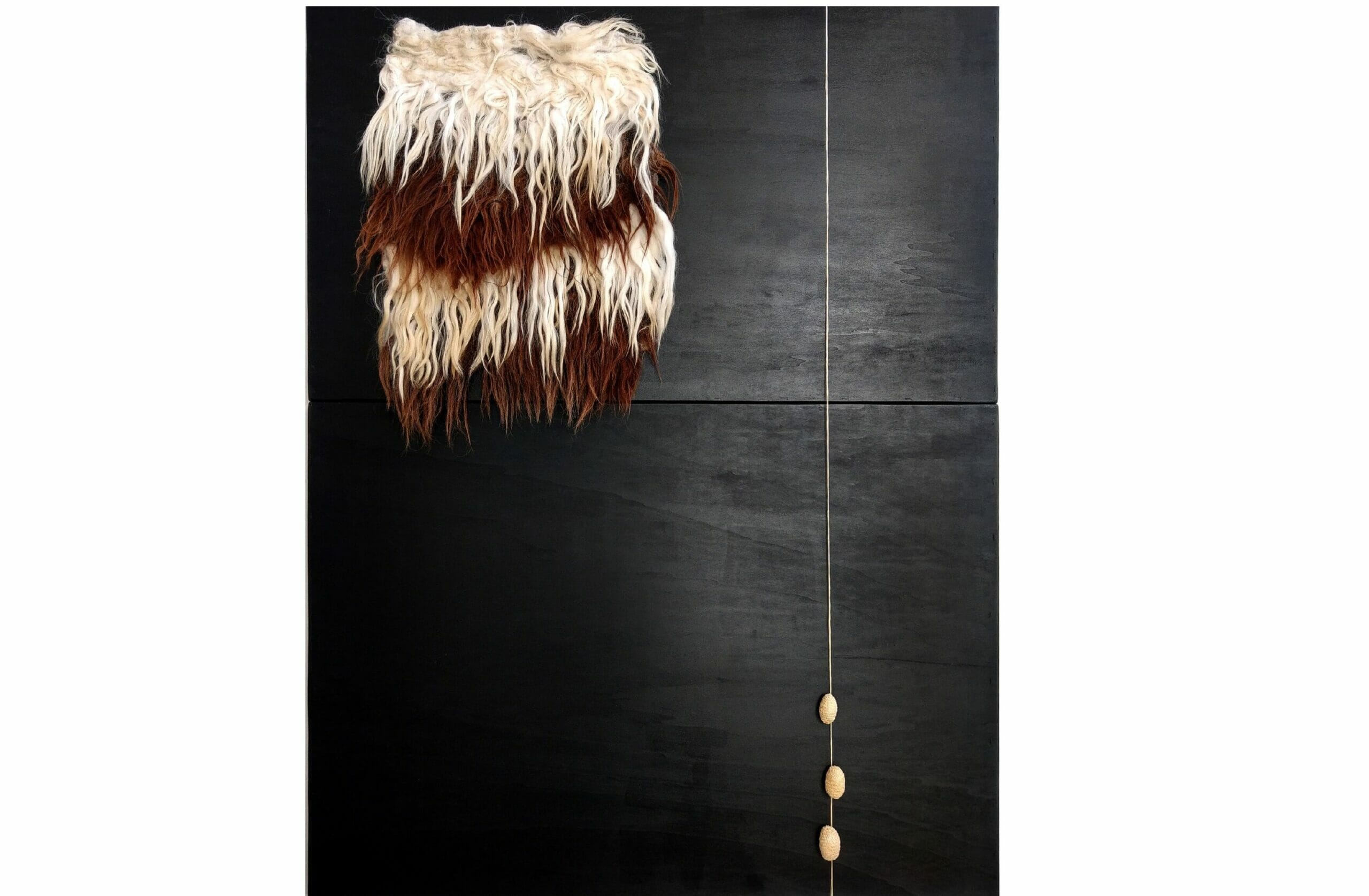 Pietrina Atzori was born and grew up in San Sperate in the years in which Sardinia was experiencing a phenomenal cultural turmoil started in the ‘60s thanks to Pinuccio Sciola who led internationally renowned artists there and actively involved an entire community. There’s no doubt that this lively atmosphere influenced, by her own admission, her life and her choices.

She is an established artist who has taken part in national and international projects, exhibitions and awards, some of her works have been selected for the edition of the Sardinia Fiber Art Biennale recently opened at MURATS in Samugheo.

Roots, territory and community are undoubtedly the three keys to understanding Atzori’s research and artistic practice. Starting from a system of values in which these three components can be recognized, she explores and experiments with materials and techniques, drawing heavily from the traditional, cultural and ancestral heritage of an ancient land, recognizing its essential value in order to find tools, shapes and languages that can interpret the contemporary world. Atzori is involved on several fronts, including projects to protect and promote local wool, and is sensitive to social and environmental issues. She recognizes the duty of artistic practice to give voice and space to the instances and contradictions of society and time.

We took advantage of her participation in INVENTARIO20 to find out more about her latest interventions.

Fragility is at the center of the reflection on one of your artworks included in the second Fiber Art Biennale in Sardinia, at the MURATS museum. Can you tell me what it’s about?

Sometime before the outbreak of the pandemic I was thinking about the concept of fragility, while reading a text by Vittorino Andreoli, “L’uomo di vetro – la forza della fragilità” (Man of glass – the strength of fragility).

The adjective ‘fragile’ refers to the characteristic of something that tends to break easily, and can be referred both to things and human beings.

Fragile, beyond all expectations has been the whole of humanity in this time of pandemic.

I have been very impressed by the overwhelming virulence of the pandemic, which attacks bodies in a subtle and lethal way. The body, naked and raw, which we think so strong and invincible, is actually so fragile and exposed.

This is why the body, with its nakedness/fragility, has entered my work.

With the intention not to dress it but to evoke it, I realized a kimono in transparent plastic on which I placed light embroidered organza cloths.

Then, thanks to this suspended time, full of individual and collective implications, I began to research and note down words that gravitated around the theme of human and non-human fragility. I selected sixty words related, also by contrast, to the theme of fragility, translated them from Italian into English, and finally embroidered them on six very light organza sheets.

I chose to use very light, transparent organza cloth to give it the signifier of fragility. A task which cheesecloth took on immediately, at least with me. In fact, right from the moment of embroidery it called for a soft and gentle operation, in which I often found myself literally blowing the embroidery thread to ‘facilitate’ access into the weft of the cheesecloth. I had to take great care to adjust the tension of the thread and it was necessary to find a shape that would allow the ‘writing’ to be readable and clean on the back.

I assembled the plastic body/kimono by machine stitching, I lightly stitched the six embroidered organza cloths (six are the fabric cuts that once assembled form a kimono in its essential scheme) on the shoulder line, leaving them free to move at the slightest movement of air.

I entrust the meaning of this work to the choice of materials, the content of the embroidered words, and the intuitive delicacy of the embroidery, intended as a starting point for a reflection on the human condition.

The second work in the Biennale is an artwork realized with Sardinian wool, which you are protecting, promoting and safeguarding through various projects…

Yes, indeed. The second work in the Biennale is one of the four large-scale boards that make up a “path” that I have entitled Connessioni territoriali (Territorial connections) (year 2019). Wool, silk, nylon fishing line, iron and light attempt a narrative between ancestral and contemporary, natural and non-natural materials, and symbolic – identitary.

The wool of the black sheep from Arbus, the white wool from Mamoiada and Nurri are placed in connection with silk, finely crocheted to enclose the cocoon, thus recalling the ancient cultivation of silk in Sardinia, of which there are still traces in the Orgosolo area; with red wool, dyed using natural techniques, crocheted and embroidered, associated with aluminium, lands and islands, meteors and constellations are formed, universes where matter exerts attraction and repulsion. Then comes the juxtaposition with iron, in squared tiles, oxidised by time, evoking the cowbells of the traditional masks of the Mamuthones, and finally nylon fishing line, in a comparison between compatible and incompatible materials with an eco-sustainable system.

In Connessioni territoriali I attempted a work/synthesis of my recent social art project carried out in 2019 using the wool of the black sheep of Arbus.

The aim of the project was to raise awareness of this precious natural resource and identity asset destined to certain oblivion. Taking this wool all over Italy, which was covered in 17 days on a scooter, made it possible to create a large “warp” on which to form a “cultural fabric” for the future in support of biodiversity and of the community that looks after it and with it takes care of all the natural and environmental resources in which it lives.

At the same time, I attempt to subvert the common opinion that defines the colour black. In Western culture it is by far the most negative colour.

When I speak of subverting the meaning, I am suggesting that we look at it as the colour from which everything originates. The absence of light is nothing more than the anticipation of its arrival. Black is not the end but is the point from which light arises. To try to grasp this subversion of the colour black, we need only think of the generative and fertile potential of the mother’s womb, which conceives in darkness and prepares for the encounter with the light of birth.

What project have you been working on during this year in which shows and exhibition projects have necessarily had to slow down?

This last year and a half has been terrible for everyone and, as we know, it has been especially hard on the weakest categories, including the world of culture and the arts in all its manifestations. Inevitably, this has also affected the exhibitions I was supposed to take part in, which have been cancelled or at best postponed, just as I had to suspend a performance project on the black sheep I was working on.

The first lockdown required continuous “repositioning” and adaptation, both emotional and perceptual. Reactions have been multiple, as is normal. I tried to find a way to make sense of what I was experiencing by creating a diary to record these days, to mark them, in some way “engrave” them in my memory, to be able to re-read them in the future.

Every day I embroidered an object, a paper, a fabric. It could be the receipt from the supermarket, or the styrofoam tray containing parsley, the net containing garlic or the filters of the herbal tea sipped in the afternoon, a five euro note or the tester of a face cream, an old letter, the label of a piece of clothing, the packaging of a scrub or the wrapper from the chemist’s shop and so on. In this way, each day was ‘pinned down’ as one does on a diary page. An element of each day was embroidered, sewn or crocheted.

During the second lockdown, which I lived with greater inner resources of adaptation, I was able to devote myself to the in-depth studies required by the opportunity to participate in an international call entitled Radici promoted by the Apulian association Futuro Arcaico.

I found the subject very stimulating and having always had in mind the theme of the black sheep, of subverting the meaning of the color black, in imagining how to adhere to the theme, I decided to carry out a mixed media project on the phenomenon of black Madonnas in southern Italy which I entitled Nigra sum sed formosa (year 2021). By studying in-depth the manifestation of the religious sentiment around black Madonnas it appeared clearly that it is alive and vital, and nothing in contemporary times is far from its origin in terms of spirituality, popular devotion and traditions.

For the restitution of this work, I proceeded by taking six “Santini” (prayer cards of Saint Mary) that I photographed and then manipulated by making minimal but significant changes to the shades of the clothing and especially the colour of the complexion of the images. In this way we declare that they can all be on a par with black Madonnas because faith fills the need for spirituality regardless of skin colour.

A sort of operation to create new images to be devoted to in which one goes beyond the concept of true or false and true authenticity is stated starting from what is heard and perceived. The next step was to print the “reincarnated” icons on plastic-coated canvas to adorn them with handmade embroidery using gold threads and precious beads. Each panel was completed with a lace frame. The work is completed with the six original holy pictures, which, embellished with contemporary turquoise lace, are painted individually on wooden boards. The six embroidered panels thus dialogue with the original santini, reflecting themselves in their diﬀerences and winking complicitly at the observer.