Chung-Im Kim: the Korean Diaspora and the Art of Industrial Felt 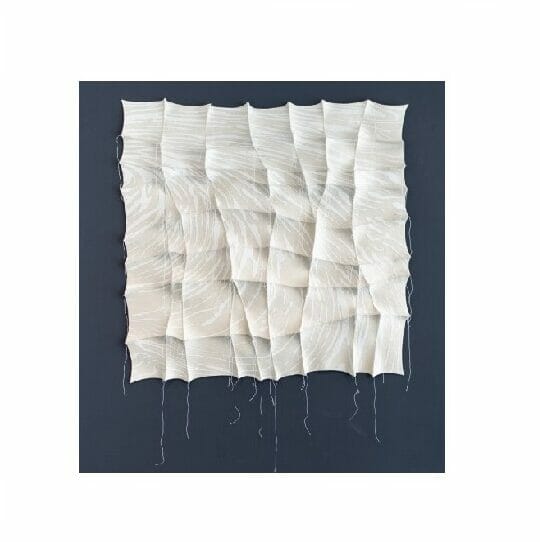 Chung-Im Kim creates minimalist three-dimensional biomorphic wall sculptures with alluring geometric tactility. Kim was inspired by the weight, density, and plasticity of industrial felt early in her career during a school warehouse visit in Seoul, South Korea, in the mid 1980’s, but it was not until 20 years later after she had immigrated to Canada that she began to investigate the scope of it as an artistic medium. Kim’s felt conceptions bridge the artistic worlds of craft, design, and fine art. Their crisp three-dimensional quality is defied by their pliable materiality creating a formal tension that is at once object-present and seemingly ephemeral. The ephemeral quality reflects Kim’s philosophy on change. Kim explains:

“I think the matter of changing is not obvious in the short term, but time reveals the degree of transformation in our thinking or even the objects alone.  Sometimes I wonder why I (some of us) love antiques or old humble objects like a hand-carved wooden bowl or a worn quilted bedspread so much.  It seems to me that the changes in the objects (or thinking) over a period add something very truthful in quality, not just the intention but endure their own history.”

Immigrating to Canada in 1990, Kim relates that it took her 10 years to adapt to a new culture and find her artistic voice. She did this through incorporating change and developing a practice that embraced the intersectionality of the Korean and Canadian cultures. Kim utilizes a traditional Bojaji patchwork stitch to join together the patchwork of industrial felt pieces that she has hand dyed or silkscreened into an organic three-dimensional design.  Bojaji is a very similar idea to a quilt in Korea. It is an important domestic cultural textile and often pulls together fabric scraps into a new design, thus repurposing the old and giving it new form. Embroidered Bojaji hold personal and traditional value in Korea and are ritually used to wrap and present important gifts. Kim’s combination of the thick industrial felt medium with the Bojaji stitching method is what achieves something novel: raised patterning and geometric edginess. It is an innovative meeting of method, material, and creative mind. Traditional Bojaji patterns realized in batik or silk lie very flat, introducing industrial felt to this method transforms the aesthetic into something three-dimensional and intriguingly biomorphic.

Chung-Im Kim was born in Seoul, Korea and received her MFA from Seoul Women’s University in 1984. She began her career working in the textile industry as a surface pattern designer while also teaching and running a studio in Seoul before moving to Canada.  Kim was resident in the Textile Studio at Harbourfront Centre, Toronto, and a freelance designer before becoming an associate professor in the Textile Department at OCAD University in Toronto. Kim has maintained an active studio practice with exhibitions at Museum of Fine Arts in Boston, the Bogojae Gallery in Seoul, Korea, and Oeno Gallery, Prince Edward County.  Visit Oeno Gallery to see her work www.oenogallery.com.  Kim’s work is held in both private and public collections.