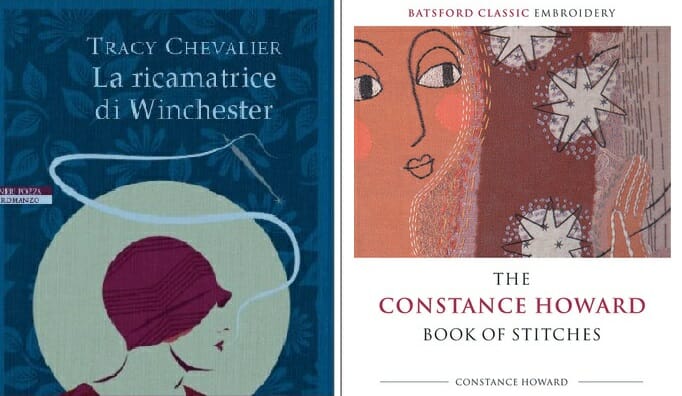 Today I’d like to talk to you about Tracey Chevalier and her most recent novel “The Winchester Embroiderer” -Neri Pizza edition (the original title which I prefer is “A Single Thread” ) and about Constance Howard, an artist who has left us a real treasure in The Art of Embroidery.   It’s not a face/off between a writer and a textile artist  but , by studying them together, one feels there us an agreement and a respect for the material which goes beyond their particular experience.

We read on page 31, the heroine is sitting inside the cathedral and is very unhappy: “…someone had left a kneeler on the seat and Violet put it on her knees looking attentively at it. Rectangular,  it had in the centre a brown circle,a kind of medallion, surrounded by a variegated blue background. Inside the medallion was pictured a bundle of leaves with acorns among blue-green foliage.  The acorns had square caps which turned to the four corners. The vivid  and lively colours didn’t seem at all suitable for a church and made Violet think of the backgrounds of mediaeval tapestries, the intricate Mille-fleurs made of flowers and leaves wrapped together.”

So we encounter embroidery and embroidery becomes an important part of her life and one single thread will change its path.

Tracey Chevalier has delved deeply into the real lives of the Guild of Embroiderers associated with Winchester cathedral (do you remember the famous song?) founded by Louisa Pearl (1870-1947) in which kneelers are still in use and  demonstrate that Art is long and life short.

I love reading Chevalier and I’ve read quite a few of her books which deal with women’s handicrafts and  weaving, and patchwork with its need for precision, transplanted to the New World from old England (The Last Runaway)  Her novels always touch on arguments which are important for us: the desire to grow and to be independent, violating the internal laws of the family, and the repression confined to women. We know a little about these. Well done, Tracy!

Passing to Constance Howard – the image of her with her hair tied with an emerald-green chignon, her face lit by a very beautiful smile, immediately attracts us. Then you discover the rest.  She lived until 2000, she was born in 1910 and was a textile and embroidery artist, areas to which she dedicated her whole life: she was a student and then a teacher at the Royal College of Art in London and then at Cardiff School of Art.  During the Second world  War with her students at Kingston Art School she designed an embroidered map for the Royal Air Force.  A clear connection with Chevalier ‘s novel is that she presented the Chapel of Eton College with 200 kneelers.  Her works are displayed in art galleries in many parts of the UK and in the Victoria & Albert in London. In London there is a gallery dedicated to her and her work.

This panel “The Country Wife”, made by Constance and her students, among whom was Mary Quant, was shown in London in 1950.

She was responsible for reinvigorating embroidery and freeing  it from the conventions of traditional needlework, for encouraging new techniques and unconventional materials, and for many innovations if her own devising.

Throughout her life she continued giving lessons all over the world and she produced and exhibited her own work and that of her students.  She wrote and published books.

Those of us who love embroidery owe much to this innovator with her attention fixed on the future, but who was also based within a patrimony of a glorious past of textiles and embroidery in her own country.

I urge you to go and read and to deepen your understanding of this great artist.  I’m not sure whether Tracy Chevalier based her work on Howard’s life, but I am sure that she met her many times while writing the story of Violet Speedwell, the Embroiderer of Winchester Cathedral.