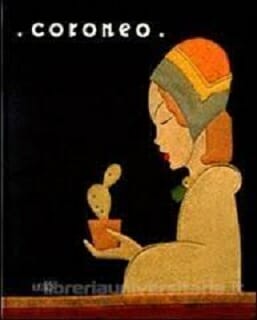 The human and artistic story of the Coroneo sisters seems to us unique and intriguing, which until now has remained almost excluded from the picture of the artistic events of the twentieth century.

With their natural talent, they achieved, without looking for it, a notoriety which did not even lack national recognition and recognition but, because of their extreme confidentiality, they kept themselves firmly away from the noise of popularity.

Their complete indifference to the activity for profit, their works are still almost unknown and do not enjoy the attention and consideration that they deserve instead.

Giuseppina and Albina Coroneo were born in Cagliari at the end of the nineteenth century and were able to enchant the public at the exhibitions and arouse the lively interest of even established artists. First and second child of the six children of a wealthy family, they lived first in the Castle and then in the popular district of Marina, near the old market, now destroyed.

Graduated from high school, which was rare at the time, even though they had not completed specific artistic studies, from a very young age they enjoyed designing fashion figures, embroideries, tapestries, puppets and household objects.

They lived and worked together all their lives. As ladies, they shared the house and the work, creating a universe of complicity in which all their original fantasy developed.

An apparently simple artistic expression, matured among the modest feminine activities carried out in everyday domestic life: colored papers, scraps of cloth, scraps of fabric, needle and thread, which in their skilled hands became matter for inventions made of figures and stories.

Yet they were extraordinary creators. Able to decline their imagination towards different areas, showing that they know how to alternate stylistic and expressive registers distant.

“The atmosphere of the beginning is that of the international language Art Deco: style that spreads in Sardinia through the painting and graphics of Giuseppe Biasi, Tarquinio Sini, Primo Sinòpico, Mario Mossa De Murtas, Edina Altara, Pino Melis and Nino Siglienti.

All the material is published with the kind permission of Dr. Marco Peri. For more information on the work of the Coroneo sisters, please refer to the website