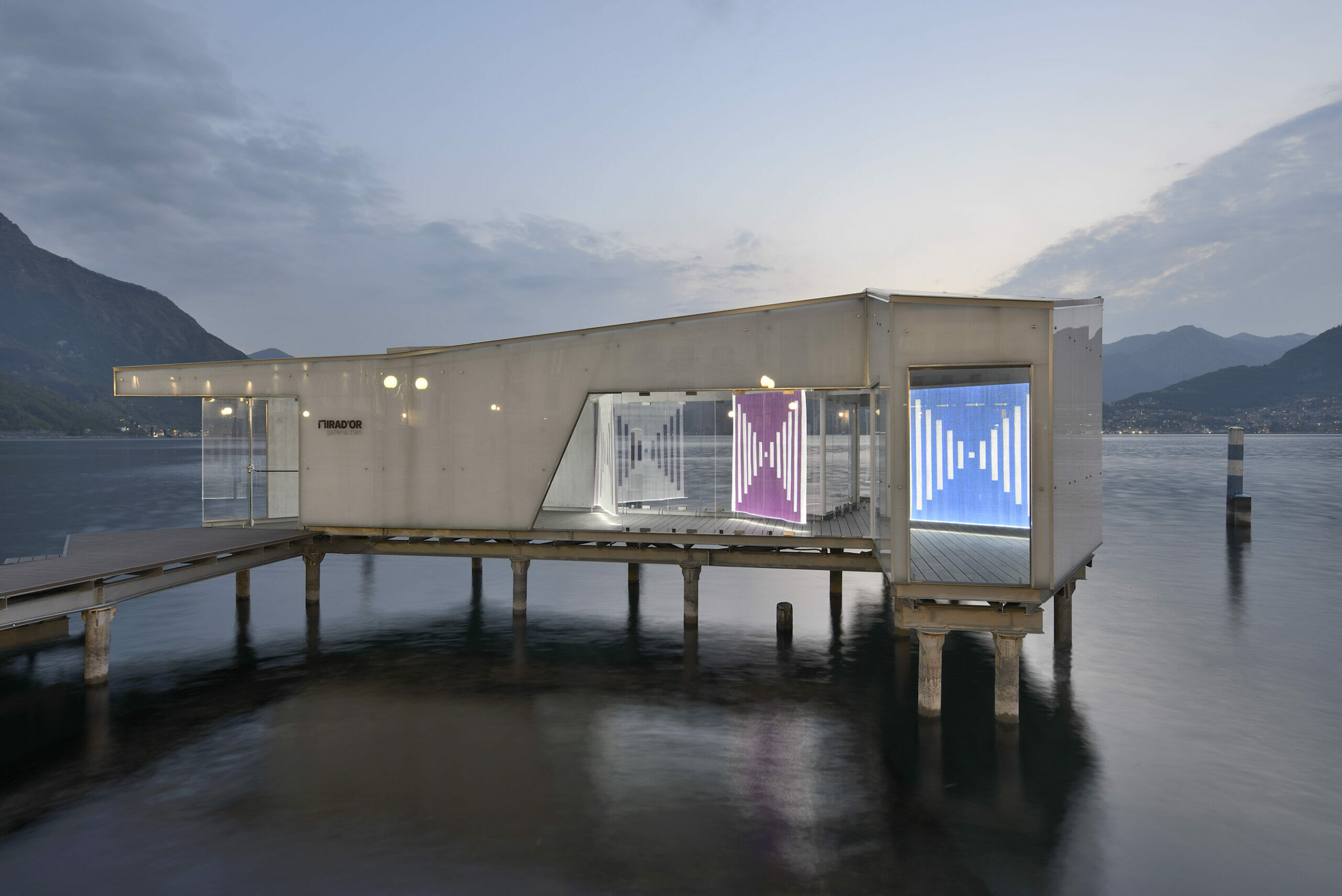 The basic concept of Mirad’Or is that art, architecture and culture are public and have to be available to everyone, day and night, from Pisogne lakefront as well as from the opposite shores, from the inside and from the water thanks to its peculiar shape. This is the true essence of this small pile dwelling immersed in the lake, commissioned by the Municipality of Pisogne, conceived by Gigi Barcella, designed by Mauro Piantelli and directed by Massimo Minini: a place where contemporary art is to be shared and mingled in the history and traditions of its own land, a space in constant dialogue with the surrounding landscape.

Waterlands are places of meeting, wandering and travel. Moving on water has always been a daily practice, as it is standing still to contemplate something which is never still: water. Pisogne lies on the northernmost shore of Lake Iseo where the lake meets Valcamonica: an obligatory passage. A land full of millenary art, from the Bronze Age rock engravings to medieval fortresses such as the big Torre del Vescovo and the frescos from the 15th and 16th centuries.

Designed by architect Mauro Piantelli (De8_Architetti), the building rises from the water just above what once used to be a medieval port and later a public washhouse. The old stones can still be seen just above the water and their shape is featured by the letter M of the Mirad’Or logo. A versatile space offering artists the opportunity to display their works from inside, outside and in the adjacent area: by framing, completing and transforming the surrounding landscape, Mirad’Or is an artwork in itself.

Mirad’Or brings contemporary art in a land of history and tradition; it is a container of possible meetings between land and water. Places can have wishes too and Mirad’Or has many. It wishes to tell about art, to wonder and gather art lovers.

Daniel Buren (Boulogne-Billancourt, 1938) is one of the leading representatives of conceptual art, an art where the ideas and purpose takes over the object itself, mingling with the environment and social context. He inaugurates Mirad’Or with four big luminous panels visible day and night from the outside, preferably from a distance such as the opposite shore of the lake.

Born from Buren’s latest research, the optical fibre panels on display in Pisogne combine the 8.7 cm wide vertical stripes (the artist’s signature style since the 1960s) with the new optic fibre technology, thus transforming the artwork itself in a source of light.

The province of Brescia has recently hosted famous contemporary artists: after Mimmo Paladino (with Ouverture, Brescia 2016), Anish Kapoor (with the new setup of Pinacoteca Tosio Martinengo), Francesco Vezzoli (soon on display in Pinacoteca). 5 years after Christo’s installation The Floating Piers, Daniel Buren, the first to be hosted by Mirad’Or, continues this trend where art installations modify the landscape in which they are placed

Daniel Buren (Boulogne-Billancourt, 1938) graduated from the Ecole Nationale Supérieure des Métiers d’Art in Paris. As a conceptual artist, Buren was regarded as visually and spatially audacious, objecting to traditional ways of presenting art through the museum-gallery system. In the late 1960s he connected to the ideas of space and presentation arising through deconstructionist philosophies that had as their background the May 1968 student demonstrations in France. Between 1966 and 1967, he joined forces with fellow artists Olivier Mosset, Michel Parmentier, and Niele Toroni to form the BMPT, whose intention was to reduce paintings to the most basic physical and visual elements through the systematic repetition of motifs. In 1965 he abandoned traditional painting for the 8.7 cm-wide vertical stripes, which alternated between white and one color, which have become his signature. Working on-site, he strives to contextualise his artistic practice using the stripe – a popular French fabric motif – as a means of visually relating art to its situation, a form of language in space rather than a space in itself. He began producing unsolicited public art works using striped awning canvas common in France. From 1960 on, Buren designed a number of permanent site-specific installations in the United States, Belgium, France, and Germany. In 1986 he created a 3,000-square-meter sculpture in the great courtyard of the Palais Royal, in Paris: Les Deux Plateaux. In 2007 he was awarded the Praemium Imperiale for painting in Tokyo.