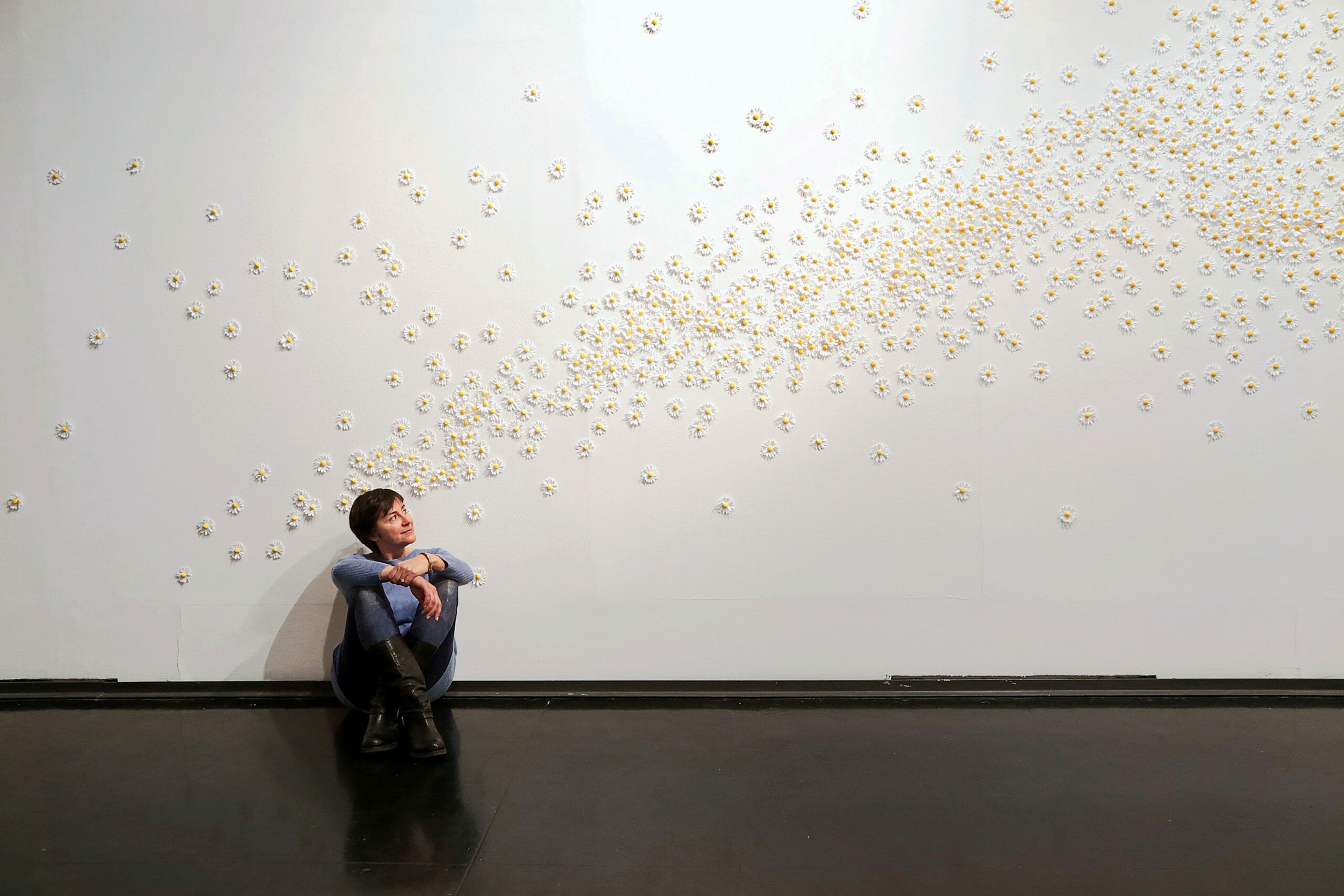 Florentine by birth, Roman by adoption, Daniela Perego began to deal with art in ’94 to make her debut two years later with a solo show in Rome. Her research directed towards light and the interaction with different materials materializes first in the projection of slides and then develops with photography, video and video-installation until she arrives at a new experimentation with matter.

In 2018 she founded dreamingvideo.it which deals with video production and, recently, she measured herself with her first curatorial experience for “The other works. Artists who collect artists “, a widespread contemporary art review that involved five museums in the Italian capital.

Her works have been exhibited in prestigious venues such as, among others, the National Center for Contemporary Arts in Moscow, the National Gallery of Modern Art in Rome, the State Archives in Turin, the Palazzo della Permanente in Milan, the 60th Locarno Film Festival, the National Museum Indonesia in Jakarta, the Castello di Rivara in Turin, the Pam in Naples, the Macy in NY, the Maxxi Rome, the Pecci Museum in Prato, the MACRO and the Carlo Bilotti Museum, both in Rome.

In her artistic career there was no lack of experimentation with textile materials with which she created large modular installations in institutional spaces and galleries. Around these works, the thread of a conversation unfolded that led me to the essence of her research and practice, her vision of art and life that she generously gave me in this beautiful interview.

In your experience, do you choose to become an artist or are you born like that ? And when and how did you understand or feel that art was your path?

I believe that we are born like that, at least so it was for me. It is not easy to undertake this profession, we know how difficult it is, even if it is wonderful. Before arriving to have the courage to follow my true passion, I had to go through a work experience as an entrepreneur that brought me to a very high level of emotional stress.My desire was different and without the help of my parents, especially my mother, I don’t think I would ever have been able to make this leap in the dark. Right from the start they pushed me to follow my feelings, they supported and encouraged me. Their pride in my small steps forward gave me the strength and determination to follow my path despite fears. I left my job, I rented a small space, I rolled up my sleeves and I started to put my nose in this, for me, so much dreamed of world. After a few years Florence, my city of origin, was holding me tight and I moved to Rome where new and satisfying perspectives opened up for me. So, to answer your second question, I understood it from a very young age but it took many years to accept this particular nature of mine which always made me feel a little different until I had the courage to take my life into my hands, live it and understand that I was not alone.

What does it mean to be an artist for you?

Being an artist is a combination of many things: it is being sincere, visionary, courageous, enterprising, in love, sensitive, impulsive but also organized, self-disciplined, concrete and much more. I think it can be said that this is true for many other professions even if … now I answer your third question which is closely related to this one …

… And in fact, you guessed it: art and life: how much do they coincide? And how do they feed and contaminate each other?

They coincide one hundred percent. Making art is not, at least for me, a job that can be separated from life.There are no timetables, Sundays or holidays, art and life are inseparable from when you wake up until you go to sleep. It is all-encompassing and occurs in all aspects of your being. By this I don’t mean that I spend all day in the studio without breaks, quite the opposite. I also spend long periods without touching a brush or a camera or other material but my mind never stops even just by taking a walk. It is a state of life.

What is the genesis of your works, Daniela? How do you get from the inspiration to the work?

I am often asked this question and I can only give an answer that might seem random but it is true: it comes from within apparently without explanation or inspiration. I re-discover again the common thread after I have started a job.The first few years it was much more difficult for me to understand the mechanism but now I have learned to interpret it earlier. Surely there is an underlying thought that moves all my work, it is what makes me have these “flashes of inspiration “. I like to call them that because it is as if the work, or a series, already finished, appears before my eyes and I just have to make it. I rarely make significant changes.

Among the many languages ​​through which you express yourself in your artistic practice there is also fiber art. Observing the works you have created in this area it seems to me that I can trace the common denominator in the remembrance, as if I chose to use the textile medium where the theme or the meaning of the work draws on a very intimate sphere that concerns affections, time and the losses it brings with it. Do you share this interpretation? In the genesis of a work of art, in your case, techniques and textile materials have also an intrinsic conceptual value that goes beyond their function of giving shape and substance to the idea?

I totally share your reflection, memory is fundamental in my work. Memory understood not only as a memory but also as a loss of it, as a sublimation of the past but also a basis for facing the present with the drive towards an imaginary future. I worked with metals, photography, video, fabric and painting and each of these tools could not replace the other in the message I wanted to give in that particular work.The material itself gives you a precise signal and suggests a sensation rather than another. To date, the textile material I use is crochet cotton. Crochet is an ancient work, it takes a long time to be made, it is a work that refers to a past time, to the chatter of grandmothers, to calm, to a way of being almost disappeared. These are probably the reasons that led me to use this medium for a series of works.

A large installation of yours was exhibited at MACRO and is now in the permanent collection. Tell me about this work – where did it come from, how did it develop and, with today’s gaze, how does it position itself within your artistic path?

The large installation is titled “Arrivederci” and is made up of numerous crochet daisies. The daisy for me initially represented my mother and a few years later also my father. Every time I go to the cemetery I pick one, dry it and keep it as a simulacrum. In the works immediately preceding “Arrivederci” I used dried daisies applied directly on canvas but then I felt the need to use a different material, new to me.

Cotton is soft, candid, simple, as is the daisy as is the memory. I needed to give substance to those who were no longer there to overcome the pain and give a new vision to the loss. At M.A.C.R.O, as in other contexts, it was set up as if it were a puff of wind that carries these small flowers with it, as a trace of a passage. Arrivederci is a greeting and not a goodbye, a positive greeting that wants to prefigure a future new meeting in a different, peaceful context, that place that will one day welcome us all.As you can guess, this installation has particular importance for me, it is the elaboration of the concept of loss that has tormented me for many years. It is like a break point from which I have restarted with a new disposition not only in work but also in life.

I know that you have another very articulated and complex fiber art project in the works. Can you anticipate some details or at least outline the contours?

In the work “Buongiorno” we can witness the birth of small red daisies on a red lawn, all crocheted. The size of this work is very large but currently I have made only a small part. I will finish it when I find a large space capable of welcoming it entirely. In this work the daisies also have the stem and therefore represent a proper field of flowers. Is this the new place where the whiff has arrived? Is it that place where everyone will be welcome? Perhaps, the interpretation is yours. This is followed by another project of large flowers, similar to those drawn by children, very tall with a black pistil that arise directly from the ground or from concrete… a sort of subtraction, simplification of the message. Lately I have had new images in front of my eyes made with scraps of fabrics that are also very different from each other, but currently they are only images, I cannot and want to reveal anything else.