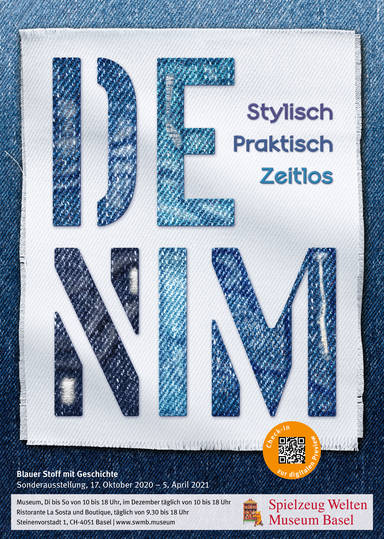 In this exhibition, which features approximately 125 objects, visitors are taken on a journey through the facets of this fascinating material. This special exhibition was created in collaboration with Ms. Liza Snook from the Virtual Shoe Museum in The Hague. We have succeeded in collecting and bringing together items on loan from various European museums, private collectors and installations from galleries and artists all over the world. The exhibition can only be seen in this form in Basel.

Denim is an essential part of many people’s basic wardrobe. Almost everyone owns at least one denim item. Today, however, denim is much more than just a fabric for clothing. One might think that denim and art have nothing to do with each other. Far from it. Many artists around the world have discovered denim as a material in its own right. This unique special exhibition shows the versatility and history of this popular material. It includes paintings by The Master of the Blue Jeans from the end of the late 17th century, jeans, denim jackets, bags, shoes, furniture and everyday objects, as well as sculptures or installations such as The Secret Garden by Ian Berry and the Panthers by Afran (Milan Art & Events Center).

The most widely used material in the world has a fascinating history that probably began in Italy before reaching America and its gold miners and movie stars. Have you ever wondered who invented the material from which the jeans you wear every day are produced? The story is quite captivating and there is an ongoing dispute between Italy and France about which city this hard-wearing fabric was born in. Now the most famous and most widely used material in the world, denim soon went from being a fabric for workwear to the undisputed star of contemporary fashion.

But what are jeans actually made of and where does the name come from? De Nîmes or rather Gênes? Over the years, historians have identified two fabrics outside the United States that could be the precursors of jeans: a durable fabric from the southern French city of Nîmes, from which the name denim is said to derive, and a cotton fabric from Genoa, Italy, which may have led to the English word jeans evolving from city’s name as pronounced in French, Gênes. However, there is no historical evidence for either explanation.

It has been more than a hundred years since blue jeans were invented as practical and robust work trousers. Nobody could have imagined it back then, and certainly didn’t plan for it to happen, but blue denim trousers have become a fashion item. Although they are newly styled and redesigned every year, the trousers worn by gold miners and cowboys have retained their most important features. They are comfortable and durable. But blue jeans did not just become trendy clothing, they are also considered a cult object. Because of their history, they have already served as a status symbol for a wide variety of movements. Today they are a part of the standard wardrobe of both workers and their bosses. Even heads of state, models and actors pose in front of the cameras in this comfortable leg attire. Nowadays blue jeans are available for both men and women, and for almost every occasion.