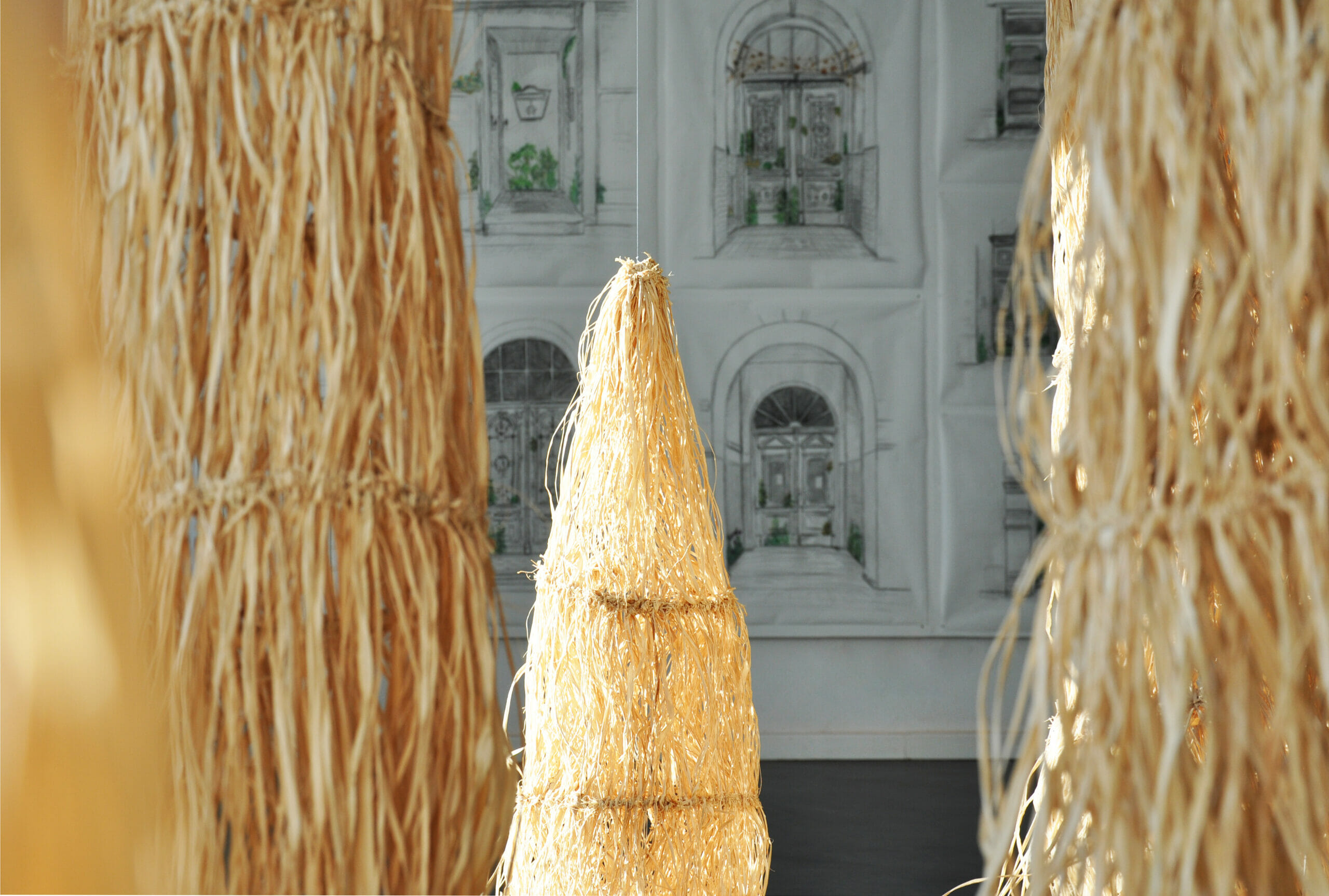 “Die Zeugen” (The witnesses) is the title of the final site-specific installation of Giulia Berra’s artist residency in Berlin, created thanks to Fresh A.I.R. Scholarship by Stiftung Berliner Leben in collaboration with Urban Nation Museum for Urban Contemporary Art. Twelve cones of untreated raffia that stand in the artist’s studio in Berlin, sentinels – or perhaps totems – for sure freely inspired by the Berliner Gold Hut ( The Golden Hat) preserved at the Neue Museum.  The headdress, dating back to the Bronze Age, presumably had a ritual function, linked to an ancestral past in harmony with natural cycles, although its conical shape is quite widespread in different geographical areas and eras in the religious, cultural, folkloristic or simply decorative fields. An “object” therefore capable of conveying different interpretations starting from the relationship between the artist, the territory and the historical-cultural context that hosts it, up to a broader and more global reflection that in the universality of the issues related to the relationship between the spiritual, natural and cultural dimensions of man, finds a common search for new balances.

The cones have various heights and diameters (the highest is about 185 cm.), are placed on the ground and suspended with nylon threads; the accordion structure (folded they are 10-15 cm high) makes it a light and hypothetically nomadic work.

The residential experience in a period marred by a pandemic and lockdown necessarily entailed some limitations: “Unfortunately, over the six months of my stay I had only a few weeks of semi-normality at the beginning and at the end of the residence (some museums and institutions have never reopened ), the rest of the time I spent mostly in hard lockdown, discovering Berlin on foot.I had to take more precautions than in Italy, because the rules relating to masks and spacing were very lax, and this resulted in isolation, loneliness and reduced mobility, while in normal times I would have fully experienced the metropolis and explored the surrounding areas and other German realities, trying to learn the language.  Fortunately, thanks to the grant from the Foundation I had a large apartment with a very spacious and bright studio, time for my artistic research and a salary, so I was dispensed with the material worries that I would have had in Italy, where I support myself. with other precarious jobs. The building was also inhabited by the other artists / fellows, so I could count on good neighborhood relations and have sporadic cultural exchanges in addition to the online world.They have been months dedicated to art and work, long, but not particularly heavy, also because, coming from Cremona, where I had experienced the first pandemic wave, I was psychologically prepared and able to anticipate the evolution of the situation without getting caught up in the off guard. I can say that I was very lucky indeed! I worked on large formats and was able to work externally in an urban environment, in a European capital, which is completely new to me.”

During the residency, she created various installations moving along a common thread that was congenial to her: “I concentrated on urban nature and landscape as a historical-cultural projection and outcome of the relationship between humanity and nature. For example, the Berlin concept of urban green is very different from ours. Large parks such as Tiegarten (the local Central Park) are similar to woods, with fallen trunks and beehives for bees while the boulevards of Schöneberg, the semi-central neighborhood where I was, have birdhouses, flower beds with weeds, vegetables, pinwheels and garden gnomes and the sidewalks are full of anarchic wild herbs. I had already been in Berlin a few days as a tourist in the past, noticing these aspects, but with the lockdown, which reduces the human presence, the architecture and urban green are more evident, as well as many marginal elements. I think this has influenced my approach a lot.

In reality in six months I have experimented and made more works, the projects mentioned in the final presentation (Die Zeugen, The Wall and Green Doors) are simply the largest and with more elements of diversity than the previous ones. For example, I also made two site specific installations similar to cobwebs, but in the past I had already created nets with collected natural materials and ropes. In general, I always work with natural materials that I collect.”

Giulia Berra was born in 1985 in Cremona, the city where she lives and works. She exhibits in collective and personal exhibitions at museums and institutions in Italy and abroad, developing projects with natural materials in close dialogue with space.Among the locations we mention: Casa Testori, Novate Milanese; La Permanente, Milan; Cascina Cuccagna, Milan; Visconteo Castle, Legnano; Antiquarium Alda Levi, Milan; Terme di Como Romana, Como; Museu Municipal Amadeo de Souza-Cardoso, Amarante (Portugal); Antonio Canova Gipsoteca Museum, Possagno; MARS, Milan; MART, Rovereto; Stadtgalerie Kiel (Germany), Slaughterhouse (Rome), House of Literature (Rome). Finalist of An Opera for the Castle 2017 and of the VIII Edition of the VAF Foundation Award (2019), in 2015 she won the VI “Antonio Canova” Sculpture Competition and in 2019 she was the winner of the International Contemporary Generation Award.