Contemporary Fibre Art is part of ISOLA PROSSIMA‘s new edition, a diffused exhibition curated by Matteo Pacini at Isola Polvese (Lake Trasimeno, Umbria, IT), opening on 30 June 2022, and featuring installations by international artist ELENA REDAELLI, contributing two works – one in collaboration with FRANCESCO BERTELÉ. A collective project articulated along a spatial and temporal path in which art, environment, and community meet and engage in dialogue.

ISOLA PROSSIMA is an environmental-themed artistic and cultural project, now in its second edition, taking place on the Isola Polvese on Lake Trasimeno in Umbria. It is promoted by ARPA Umbria and organised in collaboration with the ART MONSTERS Association and focuses on three keywords: art, environment, and future.

“Our society,” writes curator Matteo Pacini, “has reaffirmed in a peculiar way what has been known for centuries: no human being is an island but lives and finds full development in a shared relational context. Our lived experience during this pandemic has revealed how much each person’s individual reality is interconnected with others’ destinies and how the social network is fundamental to facing the challenges ahead. Today, these challenges are, first and foremost, the relationship with the natural environment and the ability to imagine the world to come. Concepts that are, in turn, strongly intertwined: any project on humanity’s future must consider the relationship with the environment, questioning our way of being in the world. Thinking about the future means having a vision of the world to come because all our actions take the forms we are capable of imagining.”

With the aesthetic and ecstatic power only art possesses, sculpture, installations, painting and video compose imaginary geography. The works serve as essential elements of an ‘experiential journey on the island, revealing and concealing, surprising and confusing, reworking what we think we know in a new form and redefining the invisible through the familiar dimension of the things we encounter every day.

The Polvese Island is the natural stage for this project: through its architecture and natural environments, in a path that runs from the island’s dock to the monastery. The exhibition features different works the invited artists have created in close dialogue with the space that hosts them.

The exhibition will be open until 10 September 2022. 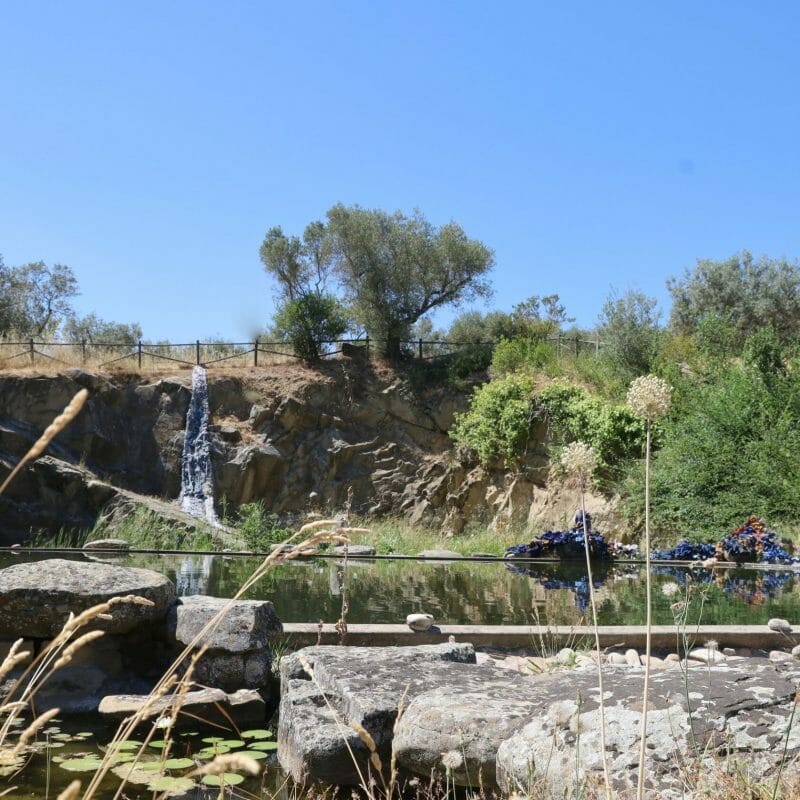 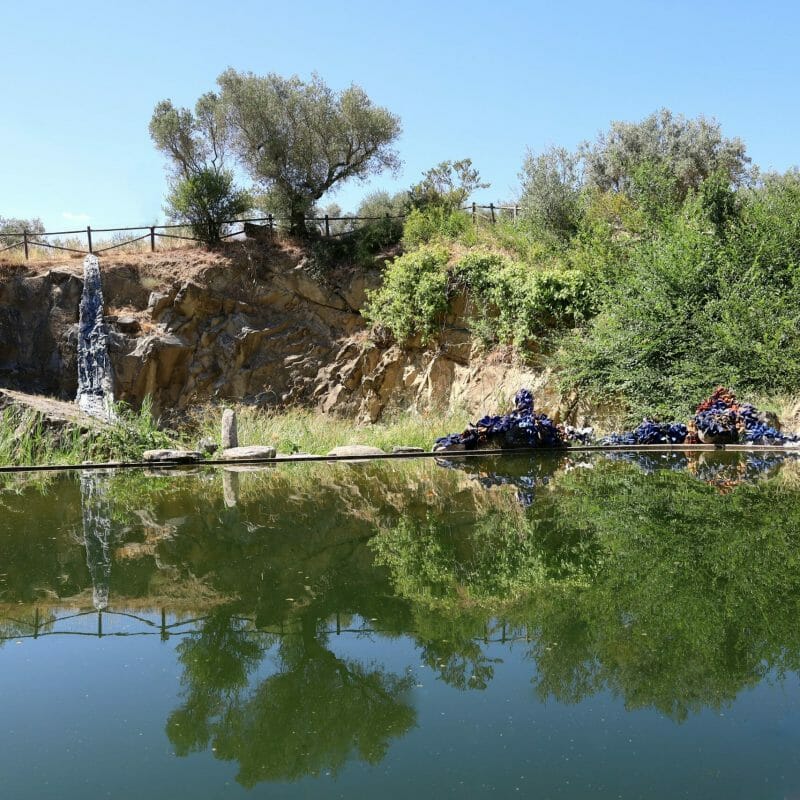 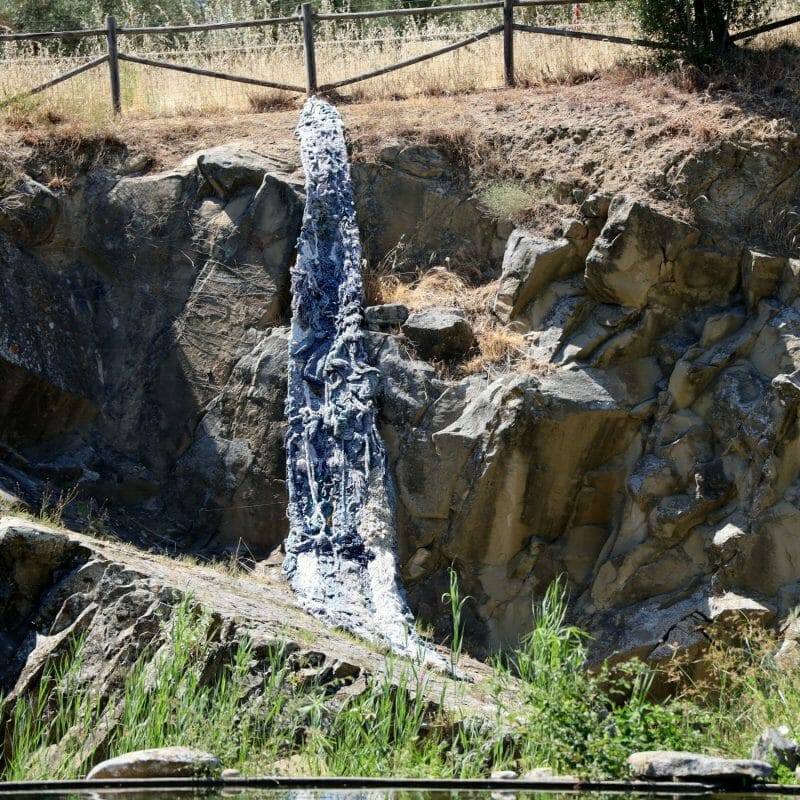 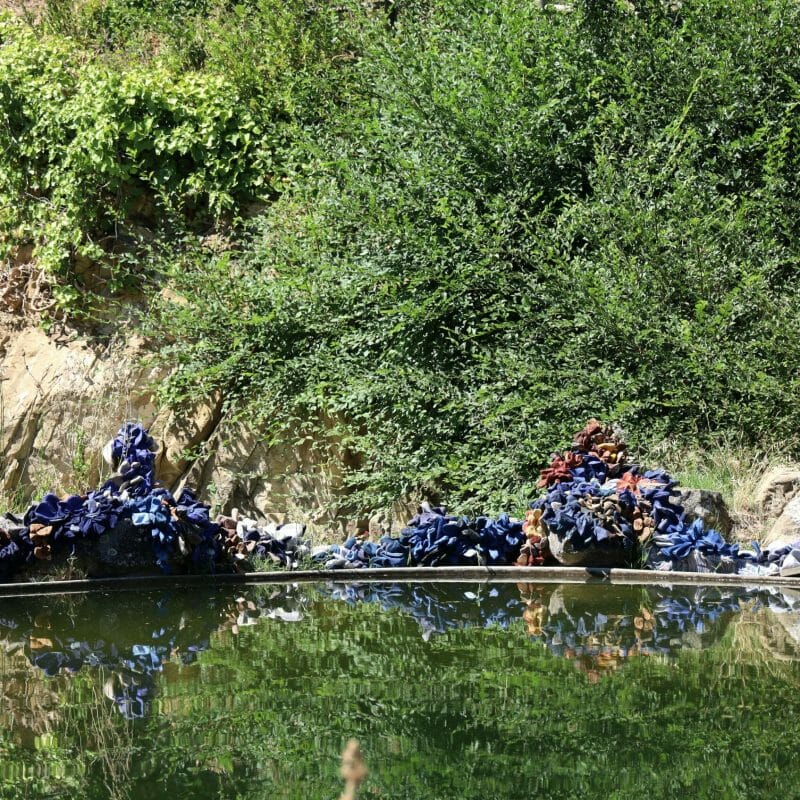 Working internationally, ELENA REDAELLI is among the artists in this year’s ISOLA PROSSIMA. Redaelli holds a Master’s degree in Fine Arts from UCA, London, UK and a Master’s degree in sculpture from the Academy of Fine Arts in Rome. Since 2010 she has exhibited in Norway, Italy, Germany, France, the UK, Korea, Australia, China, Taiwan, and Russia and is an active member of international environmental art movements working and travelling in Europe, Asia, the USA, and Africa. An award-winning artist, her works are in permanent collections at the I-Park Foundation, Heast Haddam, Connecticut, USA; the Zarya Centre for contemporary Art Collection, Vladivostok, Russia; the Civic Fiber Art Collection of the City of Chieri; the Miniartextil Collection, Como, Italy.

As a researcher and visual artist, she creates sculptures and installations between environmental art and participatory projects in close relationship to the site and the local community.

Redaelli explores materials, the transformation of matter, processes of generation and decay that defy control, creative possibilities and the scope for active intervention and interaction between matter, author, audience and the surroundings. Experimentation is crucial to her research and allows her practice to interweave and cross-fertilise techniques and materials, from traditional craftsmanship to sculpture, drawing, textiles and natural elements: ranging from hand-weaving to knitting or crocheting, felting, embroidery to papermaking, going as far as combining slow-paced production techniques with new media such as video and sound in large-scale immersive installations.

For the second installation, the artist collaborated with FRANCESCO BERTELÉ (Canzo, Italy, 1978), with whom he shares the vision of an artistic journey that is research, exploration and experience. Ranging from classical techniques to the most recent digital technologies, Bertelé merges theory and practical experimentation in the continuous study of the relationship between man and nature, investigating the most urgent political and social processes, translating them into poetic, visionary works resulting from the synthesis of collective data and personal exercise. He collaborates with a network of professionals, adopting a mutual methodology. His works and projects have been presented at Italian and foreign institutions including Mediamatic, Amsterdam; Fondazione Sandretto Re Rebaudengo, Turin; Museo del Novecento, Milan; Centro per l’Arte Contemporanea Luigi Pecci, Prato; Fondazione Arnaldo Pomodoro, Milan; Skaftfell project space, Center for Visual Art, East Iceland; Sinop Biennale, Sinop (Tuchia); 3rd Land Art Biennial LAM 360°, Mongolia.

Her site-specific installation GUTTA CAVAT LAPIDEM #3 – the latest in a series of works linked by a common conceptual thread and launched in China in 2015 – is installed partly inside the old monastery, and at the Piscina Porcinai, an old disused sandstone quarry turned into a water-plant garden in the late 1950s by the renowned landscape architect Pietro Porcinai. “The pool,” Pacini writes, “was commissioned by Count Citterio, owner of the island, and is entirely dug into the rock and fed by Lake Trasimeno waters with a depth of up to 5.30 metres. Around the large central basin are the ‘nymphaeums’, shallow basins placed at different heights and communicating with each other. In them, various species of aquatic plants, both autochthonous and allochthonous, find their habitat, thanks to which, in its artificiality, this place blends perfectly into the surrounding natural environment.”

The work is crafted with used textiles woven in a complex hybrid tapestry that reminds of a waterfall cascading over the rocky background of the pool amphitheatre, bearing witness to the traces of time and the marks this vital element has left on it.

GUTTA CAVAT LAPIDEM #3 is the third in a series of installations that follows in conceptual and formal continuity.

The title suggests the gentle but breaking power of a drop of water, the vital strength of this element. The tapestry celebrates this essential natural resource for humankind and the planet that should be preserved and cherished.

The second work in the exhibition is PSYCHAEDI by FRANCESCO BERTELÉ and ELENA REDAELLI, an imaginary post-human creature that in a new world has necessarily transformed its body, indulging the instinct to survive to machine supremacy. The Psychaedi need to re-generate themselves through profound interaction with nature that reasserts itself in a continuous exchange between bodies where the human-animal becomes equal to all other animate beings. Inspired by the construction process of the Asian hornet, the cocoon presents specific bionic patterns of structural development in space. The installation is made using recycled paper and environmental materials.

The work is set up inside the Ex Monastero Olivetano, a complex recently recovered after the abandonment of the religious community and its subsequent use as a dwelling for settlers in the service of the island’s owners, which today houses the Arpa Umbria Centre. 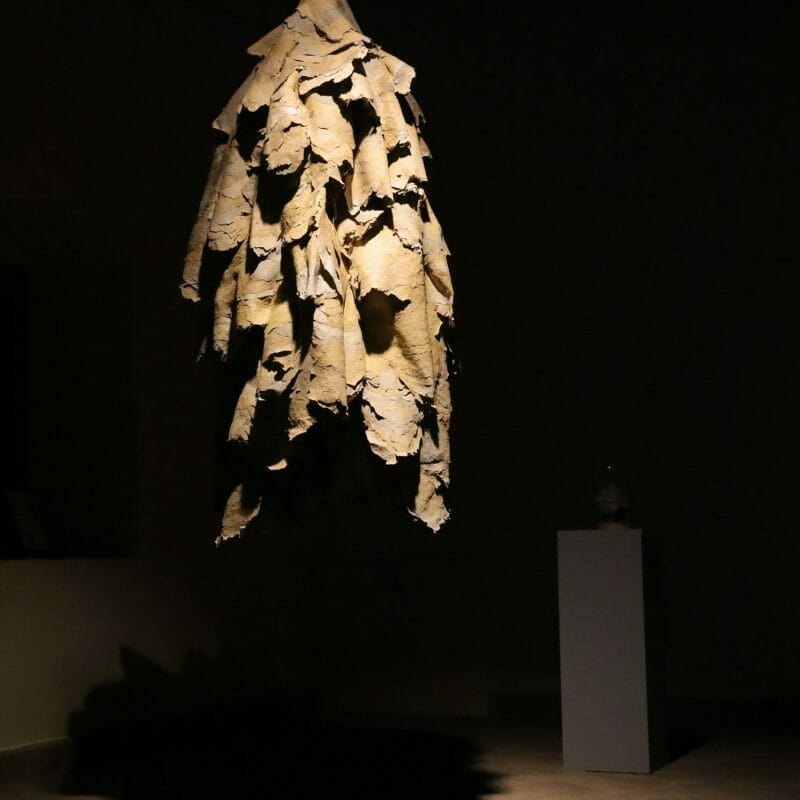 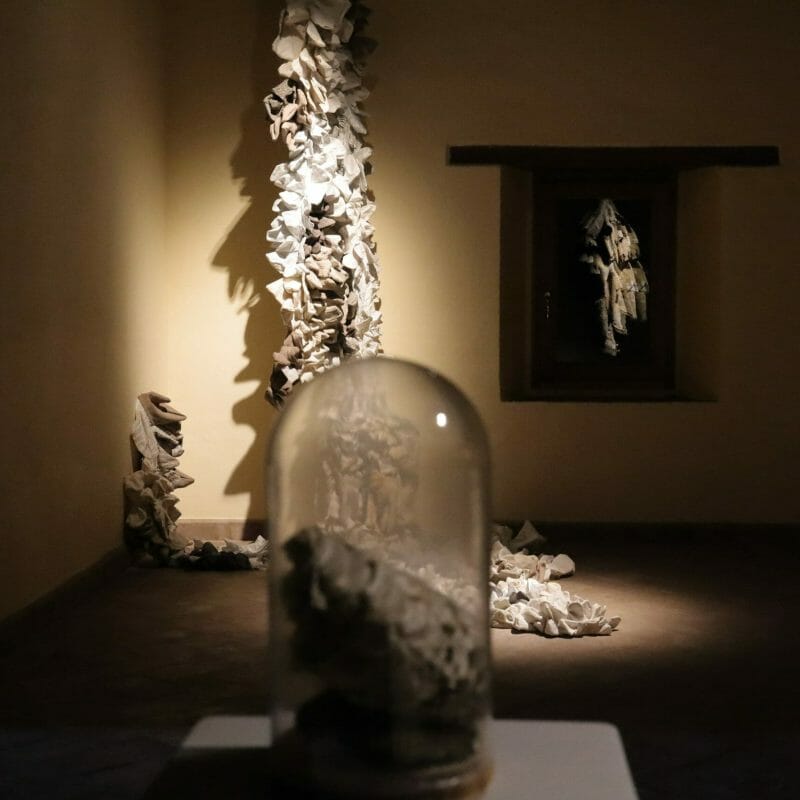 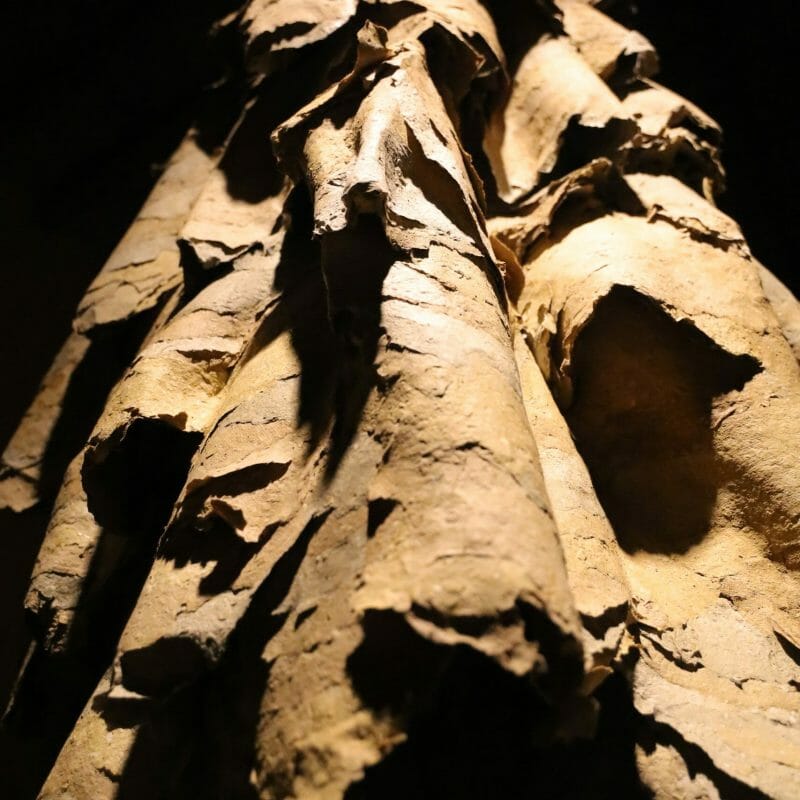 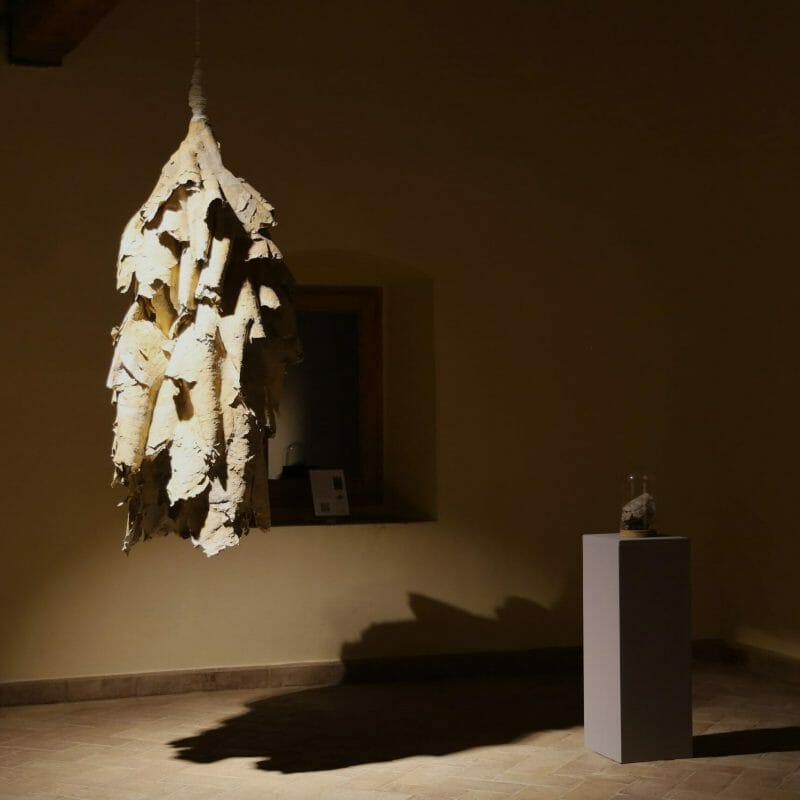 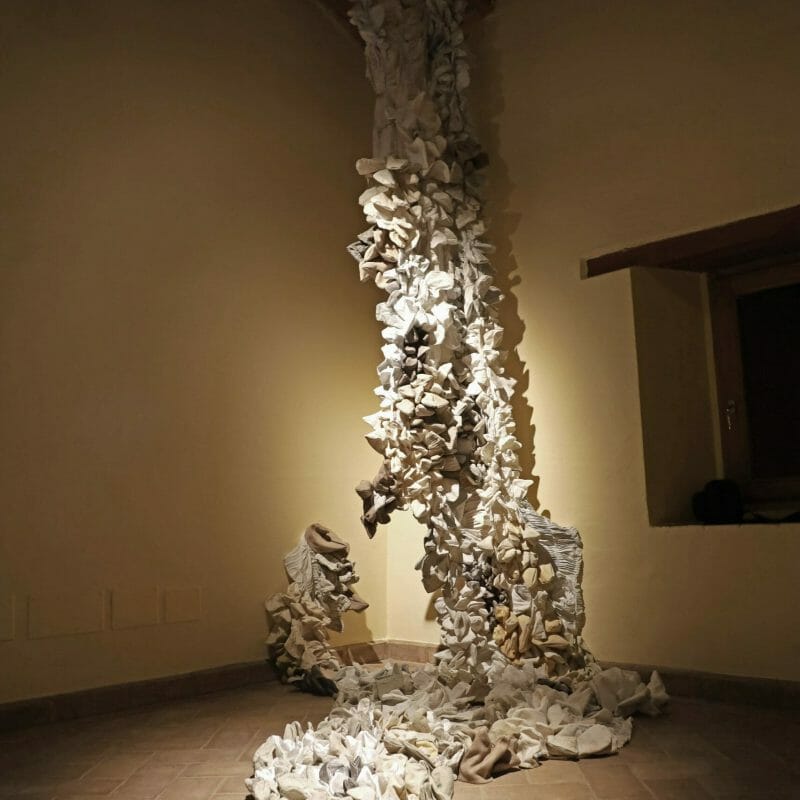 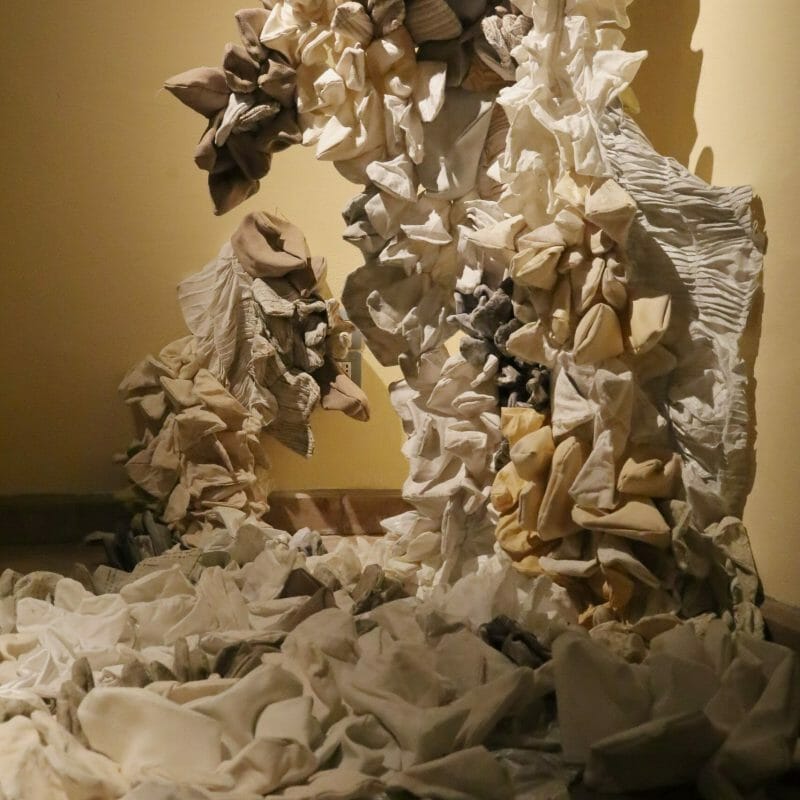 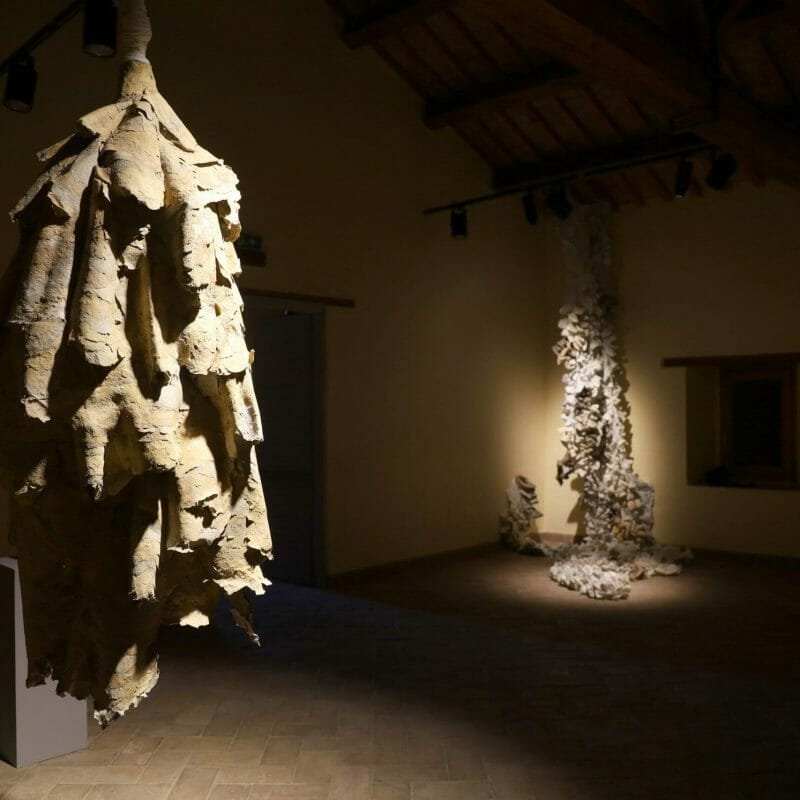