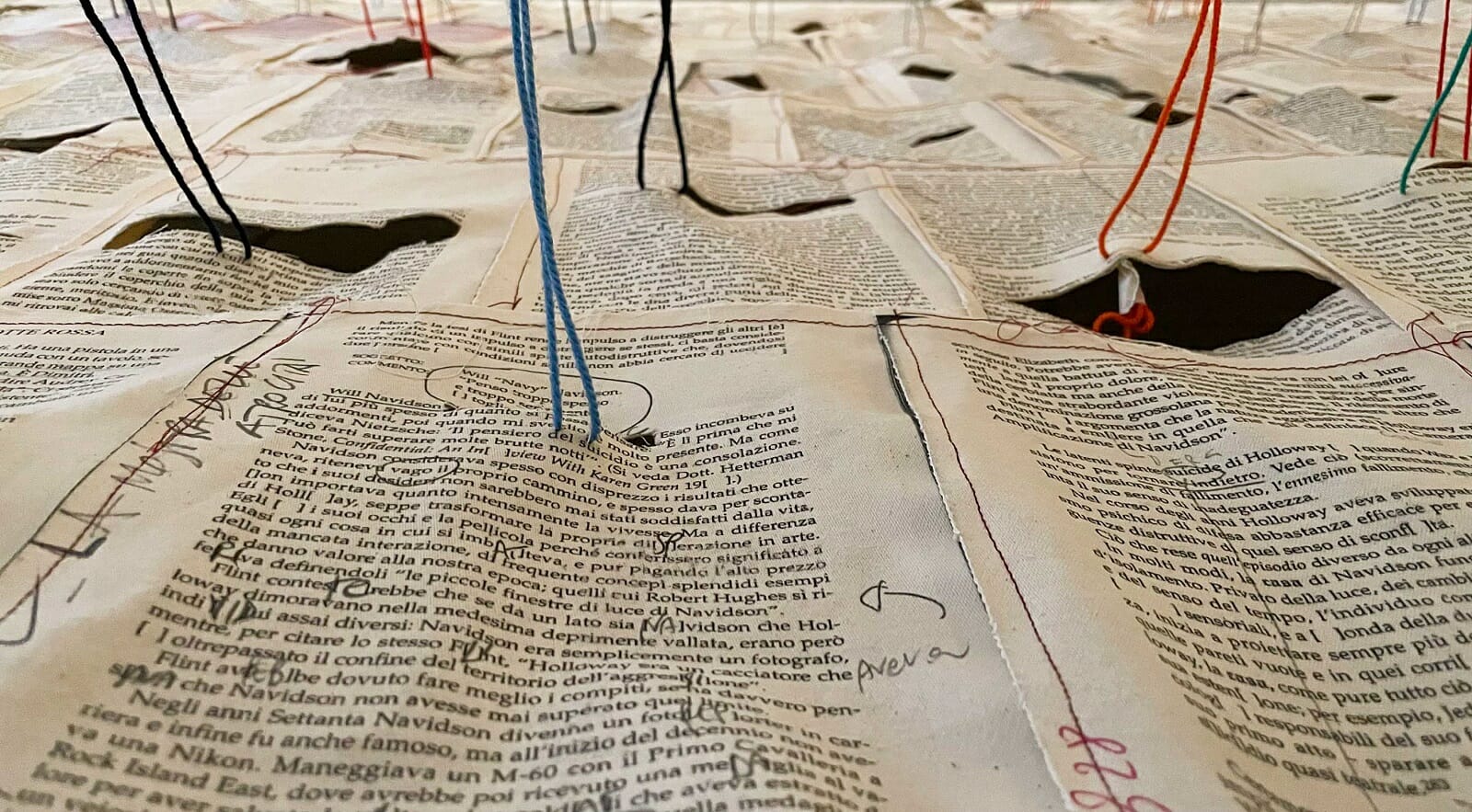 SCD studio, at its Perugia venue, via Bramante 22N, presents “Texĕre”, an exhibition by Federica Patera Andrea Sbra Perego. This is the second part of the exhibition series dedicated to the relationship between word and contemporary fibre art curated by Barbara Pavan and Susanna Cati.

Decontextualised, cut out of their original context, more or less substantial sets of words float ‘stateless’ in a suspended time and space that does not deprive them of their meaning but instead leaves them open to further possibilities. In this middle ground, coloured threads accompany the words’ trajectories towards new destinations, weaving subtle and suspended architectures, intertwining and stretching. They become traces of other stories’ warps and wefts where the grafting of a re-contextualised quote acquires, if not a different semantic value, undoubtedly a new narrative direction.

This, in short, is Paesaggio Immaginale, the core installation of Federica Patera and Andrea Sbra Perego’s exhibition, a work/manifesto composed of 12 short stories created by combining 140 quotes from 40 books. Here, fabrics and yarns, supported by metal cables, create two parallel and separated levels.

One thread at a time, the literary elements build an architecture of possibilities where movement is an essential and integral part of a work of art in a state of perpetual becoming. The keywords lead the reader/observer along a path of evocative analogies. From one book to another, from one text to another, discovering a game of quotes, references and echoes that hint at a universal and infinite tale or rather, to borrow Paul Valery’s words, at a single Spirit as producer and consumer of literature, a pantheism suggested by various authors and explored by Borges in The Flower of Coleridge.

This thesis has inspired the research behind Texĕre: in Latin, as in Italian, in its plurality of meanings – interweave, construct, compose – the verb can be applied in the areas of textiles and literature.

In a journey from the text unit to the single element and back to the text, the artists involve the observer in a wavering trend that goes from dissection to reconstruction of the original text to a newly generated text, resembling a shamanic ritual, a dance that follows the traces of an ancestral map. And again, in the separation of certain details giving rise to other works, the artists state that each part of a work of art is itself art. Yet, in this layered complexity of different disciplines and doctrines, the initial thesis is conveyed unchanged to the viewer. Is it the work or the single person that is essential? Or, instead, is the person essential to the work?

The exhibition will remain open until 14 May 2022. Catalogue texts by Barbara Pavan and Monnalisa Salvati.

Federica Patera and Andrea Sbra Perego bind literature and art by means of a thread. Their collaboration brings two experiences together in a common work, acting as a bridge and a confluence of the two practices. The duo was officially born in 2017 with the project RAR, which focuses on the value of analogy in literature and through which they began their collaboration with the Raffaella De Chirico Art Gallery. At the centre of their investigation is the dynamic that takes the act of reading to become writing, the end-user to become the author, mixing their roles. The resulting exchange finds its full meaning in transformation. Recent exhibitions include (2021) Notes without text, Manuel Zoia Gallery, Atelier Alice Voglino, Verona; (La) Natura (è) morta, Premio Cramum, curated by Sabino Maria Frassà, Villa Mirabello, Milan art fair; WOP art fair, Lugano; (2020) Rar: 2015 – 2020, Raffaella de Chirico Arte Contemporanea, Turin.