FIBERSTORMING AT THE 2023 BERGAMO FAIR 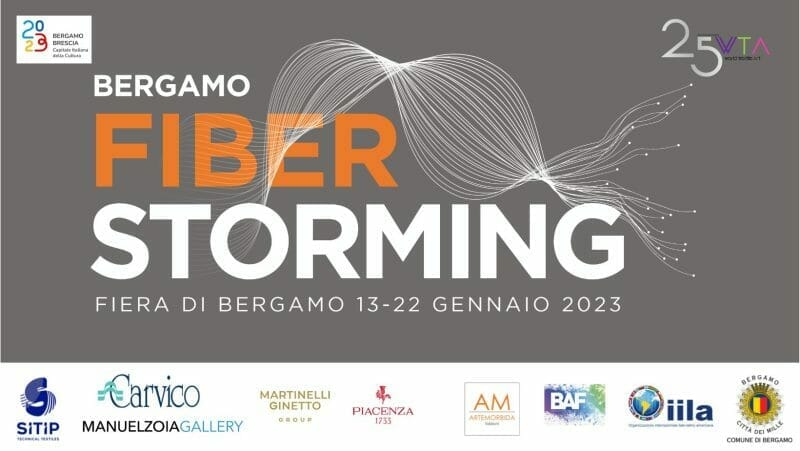 FIBERSTORMING, the project dedicated to contemporary fiber art promoted by ArteMorbida as part of the Salone Italia 25WTA World Textile Art, will be a guest of the Bergamo Fair on the occasion of IFA and BAF – the ancient, modern and contemporary art fairs – from January 13 to 22, 2023.

The exhibition, which enjoys the patronage of IILA – Istituto Italo Latino Americano, is part of the events of WTA, an international organization that celebrated its silver jubilee with the 10th International Biennial of Contemporary Textile Art starting from October 2022 in many countries of the world, through national salons with various exhibitions and a major event at the MIFA Miami International Fine Arts.

The FIBERSTORMING project, curated by Barbara Pavan, is represented in the spaces of the Fiera di Bergamo in a path of eight macro-installations located just beyond the entrance and enclosed under the single title of INFERNOPARADISO.  The works of Elham M. Aghili, Mariantonietta Bagliato, Michela Cavagna, DAMSS, Lucia Bubilda Nanni, Guido Nosari, the duo Federica Patera and Andrea Sbra Perego, Elena Redaelli will tell a plurality of meanings and interpretations of hell and paradise, in an orthographic crasis that reflects the ambiguity of every absolute definition.  Just as the classification of good and evil is susceptible to a different evaluation depending on the culture and the era that expresses it, the place where one finds its reward and the other its expiation take on different forms and representations in the diversity of religions, myths, traditions and literatures, no less than in the point of view from which any single event or phenomenon is observed, influencing individual judgement:  a swamp is heaven for mosquitoes, hell for humans. In a path that moves along the uncertain and indefinite ridge between opposites, the visitor crosses this hybrid, multiform and stratified middle ground.

The Serpendrillo by Mariantonietta Bagliato (Bari, 1985), a fantastic creature halfway between a crocodile and a snake, animals rich in symbolic and mythological references, was born from artistic research influenced by an imaginary that draws its origins from the puppetry of Mariantonietta Bagliato (Bari, 1985).  Like the crocodile, this creature has survived various climatic changes by adapting to survive even in an imaginary post-human era dominated by deserts and, like the snake, it evokes the perennial alternation of the cycle of life.The traces of this passage of time also refer to Quasi-static, the work by Elena Redaelli (Erba, 1981) in which masses of aggregates of paper pulp and wool are kept together in a more or less stable way, showing an imperceptible transformation , almost static, where the intermediate states of development are close to the equilibrium of bodies tending towards true metamorphosis.

Instead, the installation by Michela Cavagna (Biella, 1971) is a forest, a project entirely supported by Piacenza Cashmere, made with waste material from industrial textile processing. Blu Forest maintains the anomalous tones of the dreamlike dimension and evokes a cold, wintery Nature, far from the imagination of a welcoming and comforting Mother Earth, in an idea of ​​a forest that contains and declines both – the mother and the stepmother. The forest is shelter, but it is also full of voices and noises that we don’t recognize, it is silence and the place where our fears take refuge. But it is also the placid rhythm of natural time, the whisper of the breeze that gently moves the leaves and calms all anxiety.

It is itself a journey and a destination, inside and outside of us. Inferno3000, on the other hand, is the large DAMSS panel (12 meters long by 4 meters high), a colossal work created in over 4,500 hours of work, with more than 200 square meters of fabric.The two artists (Daniela Arnoldi, environmental engineer and Marco Sarzi-Sartori, architect), whose research has for years been directed towards the critical use of textile materials based on upcycling, confront the observer with the only hell we have visible and concrete trace, right here, on earth. We are the ones who have transformed our planet into a hellish place and therefore the only way to salvation and the future is a responsibility attributable exclusively to us, individuals and communities.

Cantico, the huge embroidered tulle by Lucia Bubilda Nanni, steals the song from Leopardi’s Operette morali.  A mysterious rooster, endowed with reasoning, touches the sky with its crest and beak while singing the memento mori to awaken human torpor. In the 48 square meters of drop ceiling, the artist wishes for a new song, more creaturely, like a hymn to hope, the mirage of an Eden that is impossible to forget.

The installation by Guido Nosari De Danieli created during the Paratissima Factory 2022 residence alludes to monstrous and paradoxical bodies that are generated in the empty space between us and the others. Bodies that, if we tried to give them a shape, we would dress in hypertrophic clothes that separate inside from outside so as to become bodies themselves. Fabrics that become tattooed epidermis, vestiges of an impossible body that embodies fantastic and frightening processes at the same time.

Serious Iocari is the installation by Federica Patera (Bergamo, 1982) and Andrea Sbra Perego (Bergamo, 1982), made from fabrics regenerated from PET plastic bottles, supplied by CARVICO S.p.A.  The work borrows its title from the book of the same name by Ioan Petru Culianu, an innovative twentieth-century historian of religions, and has its formal figure in play as it leads the observer moving from a passage of the literary text through the story of the verbal link between sun and one of its oldest theophanies, the swan.   The common Indo-European root is articulated in a branched succession of words in which symbolic and semantic value evolve from one idiom to another, providing a welcoming and playful three-dimensional map of the plurality of elements generated by a single matrix.

The path finally arrives at Transition, the immersive installation by Elham M. Aghili which has its signature in the hybrid forms poised between submerged marine life and emerged earthly vegetation.  By amplifying the appearance of a perceived nature that makes fun of our senses and accentuating the contrast of its relationship with what is foreign to it, the decontextualization of a small sample that alludes to the experience of the wild and the domesticated here assumes a symbolic value. While land and sea hybridize in new forms with blurred boundaries, the work questions the limits of our perception, between real and virtual, between the concreteness of material life and its own illusion.

Promoted by ArteMorbida | With the patronage of IILA

Parking: for a fee, except for people with disabilities