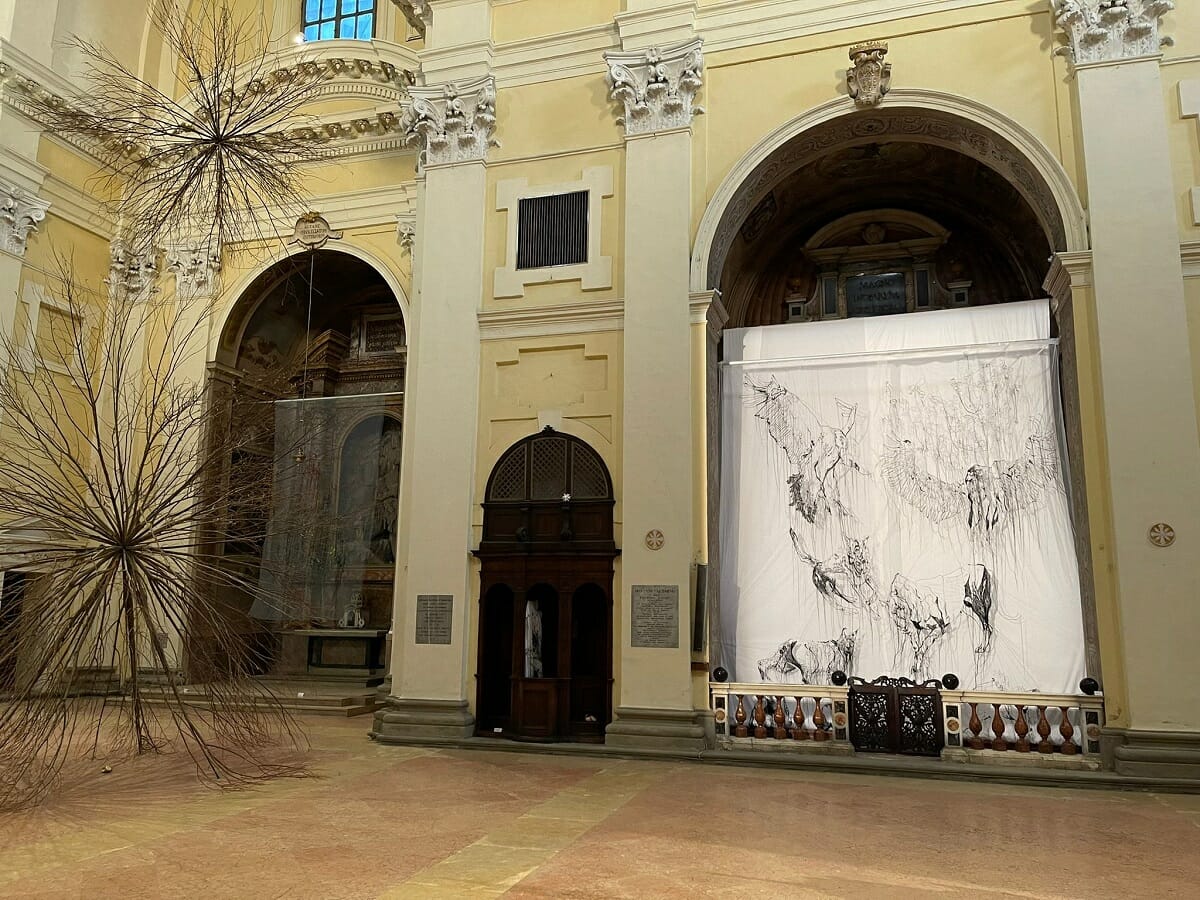 On the occasion of the 700th anniversary of the death of Dante Alighieri, the Diocesan Museum of Faenza in collaboration with MAG – Magazzeno Art Gallery, Dante Plus and Bonobolabo, has set up an exhibition curated by Alessandra Carini, Giovanni Gardini and Marco Miccoli in the Church of Santa Maria dell’Angelo inviting nine contemporary artists to create works inspired by the work of the great poet.  Amongst the works, two large embroidered canvases by Lucia Bubilda Nanni, artist from Ravenna, born in 1976, graduated in Philosophy at the University of Bologna who since 2016 has participated in exhibitions and artistic projects in museums and public institutions and art galleries, whom I talked to about her participation.

Lucia, how did the idea for these works come about and what was their genesis?

I draw freehand with a mechanical Bernina with electric pedal, I should say with “free eye” rather than freehand, it is my eye that draws; if I portray a person live I may not even see what I am doing, because I know that the hands have already done it. Sometimes it happens that I walk around the house with gloves on so as not to look at my hands, if I concentrate too much on the hands they impress me; having them webbed and with fewer veins and tendons in evidence would be a relief for me.

The two large canvases are both in tulle, one interacts with the background of the chapel and the other has as a background a white cloth to create shadows; they were made for the Faenza exhibition. Initially I should have exhibited only The shadow of the shadow then I fell in love with the chapel dedicated to Our Lady of Lourdes and I immediately imagined Aquarium. One could say “an image at first sight”, love at first sight. As much as that blow caused me to laugh, I tried to be delicate, to make it become a smile rather than a laugh, also because that church is not deconsecrated and that chapel is still an object of devotion. The shadow of the shadow, on the other hand, was born as the apodictic nos of children: I did not want to participate in an exhibition on Dante, I love Dante (I know whole songs by heart if I have to show off my love license) but not the exhibitions on Dante. I therefore said “no” and at the same time sought mediation as a patient mother does; the bestiary (of the Divine Comedy) was the only solution to my stubborn no.

You embroider leaving the threads free. Is it a technical, formal or conceptual choice?

Laziness. I started more than 15 years ago, when I realized that I could draw with the sewing machine as I do with a pen or a pencil, I enjoyed challenging myself in speed (portray something in the shortest possible time) but I broke all the needles because they got stuck in the threads that I left behind and in front, this impediment did not lead me to cut the threads but to become even more dextrous. I like impediments, mistakes, I like to find solutions and improve, like an athlete.

The gesture, the speed or the slowness are inside the reasons of a shape, this is the precipitate: of that time, of the speed, of my mood, of my control and of the occasion; this even before any of my intentions or practices (reasoned project) because in order to draw I always have to overcome the fear of doing it. I can freeze for days at the thought that  I can’t do something for the thrill of having to face it.  There are jobs that have taken me months and even years and however methodical and continuous it may be, for fear of making a mistake even with a single gesture, I freeze: the error is always there or the idea of ​​the error and it is only when I am able to accept it, to let myself go, to change direction, what I control and govern what I do. The threads are my impediment and they become so also to the eye: the eyes always change direction, freeing themselves from the threads and this makes the shape dynamic. It amuses me a lot.

How do you relate to the space in the creation of works of this size that necessarily interact with the place that hosts them, also changing the perception by the user?

I grew up in the studio of a set designer (my uncle), my eye usually transforms space, perhaps in great secret, just for my enjoyment; when I can really do it because I was asked it is my true  joy. I believe that well before my studies in philosophy, it was all the pareidolia phenomena to which as a child my uncle subjected me to have awakened my gaze to the play of forms: “now sit down and look” (usually an informal painting); “When I come back you tell me what you saw” (and he would come back after hours!)

How did you come to use embroidery and fabric?

By chance. I had recently graduated in philosophy. I wanted a child, I wanted to start drawing and painting again. Pregnant I could no longer use toxic paints: I drew only insects by pouring filaments of paint, I was like an ice cream man; I opened the jars and let them thicken at different speeds of fall.

I have always needed a medium between me and the support, first it was a dry brush that did not touch the surface and now a steel needle that apparently repeats the same frantic gesture as an angry woodpecker. I have always had the terror of needles and yet now I am always full of quills, in my hands and in my clothes (pins everywhere, it is dangerous to hug me) The transition was this: paints, glues, needles. My self-sufficient ambitions (clothes, accessories, objects) were shattered: I wanted to stratify different materials to make large tapestries and the glue had lost all its charm; I went to look for an armored sewing machine. The first drawing I did was a white spider on a red shirt (size 5 months)

What are the materials you usually use? Is the choice dictated by technical needs depending on the work you intend to create?

I prefer tulle for transparency and hemp for affection. I am looking for old loom rolls that are still found in the countryside, here in Romagna: uncut kits that tell many stories, for example I spent a beautiful afternoon with an elderly lady, who survived all her sisters and whose kits she still had because none had married, they had all become nuns! For some years I have also been using aluminum, it is very exciting because it is no longer the control of a sign, but of the light (the backlight). For my sewing machine it is much less exciting (it is very strenous).

What was the most demanding work you worked on?

Tears, a work exhibited in 2016 and to which I dedicated the previous four years. There are more than 240 faces, almost all anonymous: a photographic census of the ossuary of my city, Ravenna. Historical photos, the first dating back to around 1840 (the expertise of a historian dated it in this way) and in fact it looked like the shadow of a Carbonaro Risorgimento; I’m talking about shadow because of many photos there was only a shadow. Moved by the desire to save those shadows, that faint trace, I started the work. I often went back to the municipal ossuary because I was infatuated with a face: a young man who I imagined was a master killed in a fascist attack, I don’t know why I imagined this story but in the end I found myself in that place over and over again and I imagined the stories of all those 240 faces, each face is unrepeatable, I hate death that erases forms.