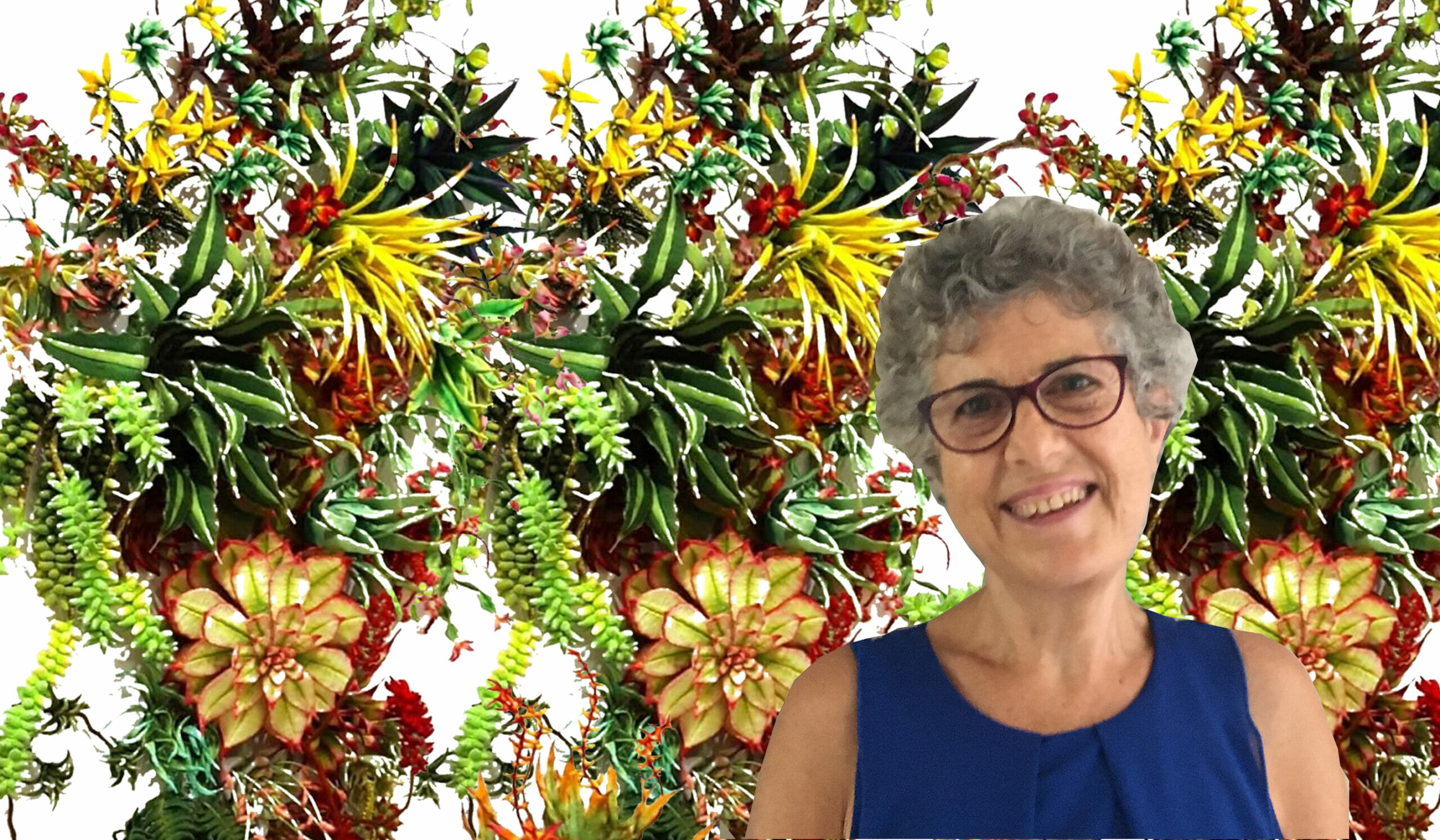 The second jury of the Valcellina Prize met on 8 May to examine the 23 finalist works of this year’s edition. While waiting to meet the awarded artists and the opening of the exhibition, we interviewed Renata Pompas, who with Eva Comuzzi, Anna Galtarossa, Massimo Premuda and Thessy Schoenholzer, is one of the experts who make up the jury since the fifth edition of the competition.

Renata Pompas is one of the most authoritative Italian voices in the sector. Graduated from the Brera Academy of Fine Arts, she has worked over the years for prestigious textile companies. She has presented her research in the field of Color and Textile Design all over the world. She is one of the founders of the Italian Color Association as well as director of the Digital Textile Design course at AFOL Moda Milano. Journalist and writer of specialized texts such as her “Fiber Art Italiana. A virtuous plot “(Aracne Ed.), the first book dedicated to this medium which reconstructs its history and evolution in the context of contemporary art in our country. Her latest essay is included in the publication “Fiber Art 20 years of Valcellina Award” which will be presented during the press conference of the 11th edition, Saturday 19 June 2021.

When did you approach Fiber Art?

I had an artistic education and my profession as a designer of fabrics for fashion and home linen introduced me to design and fashion, always remaining passionate about art. In 1996 I met Gina Morandini, she had invited me to hold a seminar on color at the Associazione Le Arti Tessili which she chaired and at the same time there were two very interesting opportunities that had shown me an unknown aspect of art, a specificity that used textile materials and procedures. In that same year, in fact, the first exhibition of the “Valcellina” National Textile Art Award was inaugurated at the former Spinning Mill in Maniago, in which Gina had urged me to involve my students from the Textile Design class; I remember that my student Barbara Salato had won the first prize out of 33 participants, including Federica Luzzi, Lucia Pagliuca and Cristino Carciani who would have carried on the research establishing themselves as fiber artists (since then my students had participated in numerous editions) .

The second occasion was the invitation to participate in the TEXERE (Textile European Education and Research) conference that took place in Gemona del Friuli, organized by Gina Morandini and Carmen Romeo, with the presence of many European universities and a small interesting exhibition of artifacts of art and design, centered on textile techniques. In Italy I had never seen anything like it, and since then I have begun to take an interest in it, attend exhibitions, associate with artists and their studios.

What is the state of the art today or better of Fiber Art?

In my opinion today it is very difficult to talk about a general state of the art and Fiber Art in particular. There are no longer any artistic movements that recognize themselves in a group, a manifesto of intentions and a common, even if often momentary, aesthetic conception. Rather, there is a fragmented profusion of individuality of artists, curators, collectors. As for the Italian Fiber Art, which is the one I followed in particular, the founders or initiators have reached a certain age or, unfortunately, have abandoned us. Many then, having achieved international success, feel the definition of “fiber artists” with which they have established themselves is narrow and limiting, and prefer to abandon it. I am thinking for example at an international level of Magdalena Abakanovicz or Jagoda Buic or even Sheila Hicks, who was not introduced with this definition at the 2017 Venice Biennale.

I also want to add as a reflection, that in the fluidity of the present it is difficult to give certain definitions in art: many high-profile Fiber Art exhibitions today exhibit, alongside works by those who recognized and contributed and found this expression, the textile works of artists known but that have nothing to do with the movement, perhaps they do not even know it, absorbing them in the definition of Fiber Art. After all, already in 1936 Meret Openheim in “Déjeuner en fourrure” had used soft materials in an anti-rhetorical key, and then throughout the twentieth century we have had excellent examples.

Has the role of the Valcellina Award, one of the most prestigious Italian contests dedicated to Fiber Art, changed over the years?

At the beginning, as I said, it was a national competition, then I remember the passion with which Gina presented it and promoted it at European universities on the occasion of the ETN (European Textile Network) and TEXERE (Textile Education) conferences. and Research in Europe), always accompanied by Fiber Art exhibitions, which we shared with great mutual satisfaction: Oslo (Norway), Cologne (Germany), Tilburg (Holland), Graz (Austria) Rovaniemi (Finland), Haslach (Austria) , Kaunas (Latvia), London (England), Izmir (Turkey), Umeå (Sweden).

Everywhere Gina solicited teachers, invited students, created links. Soon the Prize became international and experienced a growing expansion of the countries of origin: at a certain point word of mouth crossed the oceans and participations began arriving from America and the East, which still seems to me very active in this regard… This fact allowed a very broad and stimulating cultural comparison, not only for the jury, but also for the participants themselves.

What are the most interesting and exciting aspects of participating in the jury of the Valcellina Award, the most qualified ‘observatory’ on young international Fiber Art?

I have participated as a juror in all editions of the Prize, starting from 2006, together with a succession of artists, art historians, gallery owners and curators. I remember passionate discussions, sometimes collimating, sometimes diversified opinions, which always came together in a common and shared judgment, with the precious coordination of Gina. What I have been able to observe over the years with respect to the participation of the under 35s at the Valcellina Award is an awareness of the potential of the textile medium and its anti-rhetorical and tactile characteristics, interpreted in many different ways.

In this latest edition, for example, alongside the conceptual works that made use of ‘objets trouvés‘, perhaps enriched by projections or performative actions, I saw works of great complexity, including technical ones.  For example, the Danish Søren Krag Nielsen presented a beautiful and colorful tapestry, Millefleurs, inspired by the meticulous medieval and Renaissance plant compositions whose realism made it possible to identify every tiniest plant, and reinterpreted it entrusting self-generation to a logarithmic program of 2000 digital flowers and their intertwining, distributed on a surface of cm. 600X160: a truly demanding work, which has already been requested by a museum.

I also really liked Wild Ontology, another work related to nature by the Iranian Elham Mossllemi Aghili who, daughter of a former Persian carpet dealer, has rendered three-dimensional the representation of nature, wrapping the yarns around the wire with a amazing expertise and creating a luxuriant nature, with intense and fading colors in rich shades.

An opposite view of nature, mortified, devastated, contaminated by man is that of the work of the Taiwanese Yu Jung Wu, The River My Heart Seeks, who dipped pieces of white fabric wrapped and knotted with the shibori technique in the polluted waters of eight different rivers, creating a refined, disturbing and unexpected work.

I was also struck by the installation Signs of Resistance, in which the Iranian Reyhaneh Alikhani semantically overturned the image of the knife, of which Maniago the seat of the exhibition is the Italian homeland, from a cutting weapon, aggression and wound whose metal blades cut and sever, to wrapping them in a soft and welcoming manual wool felt, whose heat is tinged with the oxidation of the cold metal it imprisons, as if it were a dripping of blood.

You can then read the jury’s motivations and see the works, unfortunately remotely, in June.

What were the difficulties faced by the jury in this edition, between restrictions and lockdowns?

Speaking of remote, I could not participate in person, but I carefully studied the rich and detailed material – the files, the photographs and the videos – that the Associazione Le Arti Tessili provided me and on the day of the discussion I was shown the works come out of their packaging, unrolled and displayed from all sides and I participated in the collective discussion.

You are the author of one of the few books – if not the only one – that document Italian Fiber Art. A monumental work of codification, research, cataloging, that embraces a wide span of time. How did this language evolve in Italy?

Yes, “FIBER ART ITALIANA a virtuous intertwining” is still the only book that reconstructs the history of Italian Fiber Art, not only with the 61 cards of the artists, but also with a meticulous reconstruction of the exhibitions, events, of the European context. If I retrace 50 years of its history with visual thought, I think that, as in art in general, language has embraced installations dialoguing with the public, large or very large dimensions, the introduction of projections and then the use of digital in the programming of the work itself. It is not a question of an evolution in the Darwinian sense of development and improvement, but of a transformation of languages, now globalized and dematerialized by the “infosphere”. This has not canceled other expressions, let’s say “more material”, just as digital in art has not canceled out painting.