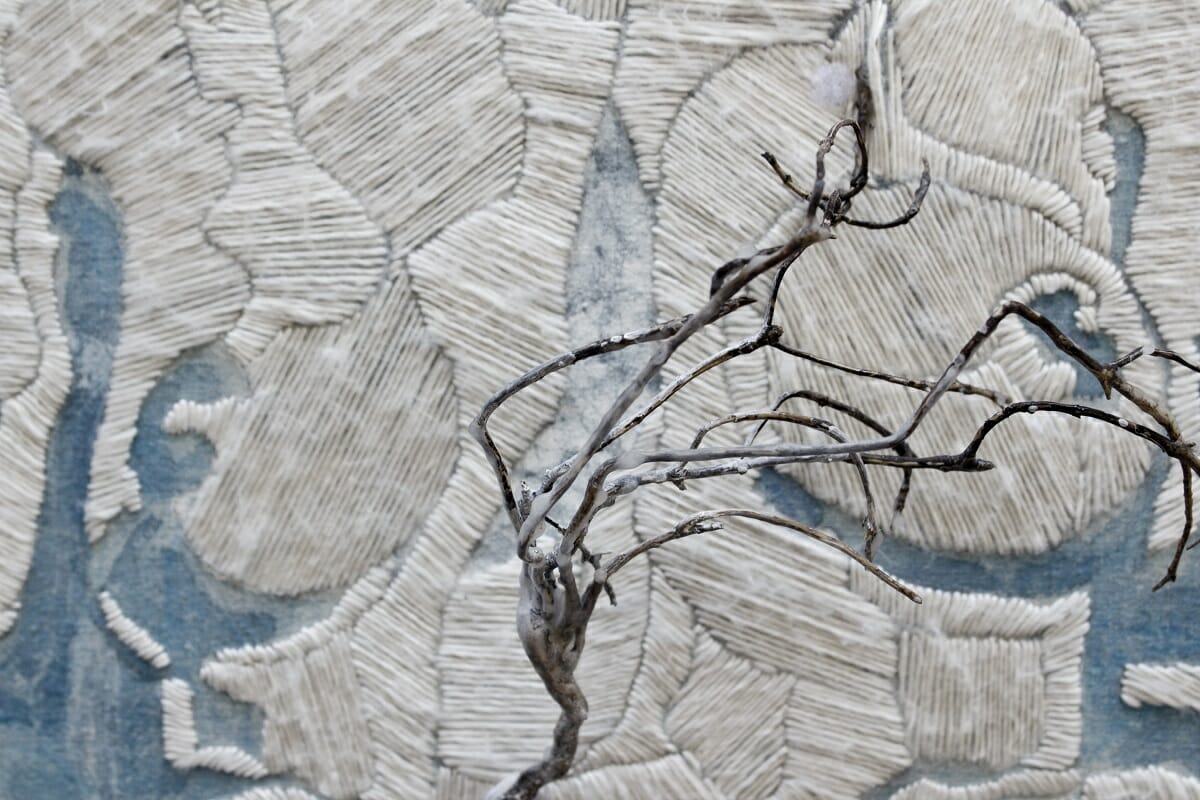 On 19 March 2022, at 5 p.m., SCD Studio will be opening the third exhibition of the project that the Perugia Gallery (Via Bramante 22N) is developing around the body. Curated by Erika Lacava, “Fracta” narrates a shattered body, repeatedly torn apart and reassembled, destroyed, and reborn. A beloved disappeared body, a body that generates life or takes it, a body that no longer belongs to us. Through an inherently feminine language, which is constituted by thread and embroidery, the pieces lost in the journey of life are reassembled thanks to the fibre of time, which patiently stitches them back together in a new guise, healing the wounds and mending the tears.

The three female artists in the exhibition – Deborah Graziano, Ilaria Margutti and Camilla Marinoni – present wounds and ruptures through disconnected body parts, these becoming a symbol of the whole, a bodily synecdoche restoring the entire loved essence.

Through the recovery of objects, Deborah Graziano speaks of a past that remains embedded in the folds of the time being; by presenting body parts, she brings us back to the female condition. “Ophelia’s frieze”, a dress designed from her grandmother’s wedding bedspread, given to her great-aunt as a dowry and never used, tells of a woman’s failure in a society where love and marriage are the ultimate goals. And so, along with the empty and unused trousseau suitcase, the “good manners” taught to girls often translates into excessive compliance that ends up, metaphorically, tying their hands and feet to an old wooden weight, thereby hindering their movement. A bitter reflection on the condition of women, a half-spoken tale of bonded lives.

Ilaria Margutti’s work revolves around the concepts of reading and writing as the key to passing from a fragment to the whole and vice versa. In “Recto-verso”, organza allows the interior and exterior of women’s busts to be seen: the contours overlap and merge between embroidered paths and dried flower branches. In the works lacking transparency, nature emerges on the rear, where the threads are tangled up and cannot be deciphered but prove to be as essential as the rational design on the front. The work “Togliere le parole di mano” is also the result of some readings: three and a half metres of embroidered bed linen recording passages from different diaries, transcribed here just as slowly as time heals pain. The story unfolds between words sewn white on white, bits of speeches, parts of lived lives stitched up and reunited in a collective diary to give life to a new story of universal value.

Camilla Marinoni, likewise, chooses a part for its entirety. In her emblematic works, the navel and the breast complement each other in an interplay of concavity and convexity. Both are components of the primal maternal dimension, one is responsible for the birth and the other for nourishment, a physical umbilical cord and a pictorial one that keeps us linked to life. The subject is explored along two main lines, starting with the small white-on-white “Zaffo”. This reflection arose after the artist’s mother’s passing, who handed her the knowledge of embroidery to construct a healing practice for her absence. The work is revisited in the recent “L’immortalità non consola della morte”. Here the images, imprinted permanently in the memory, are sewn on the family bed linen handed down through generations. Symbols of memory, the sheets are dyed with red wine that will change colour over the years, just as the perception of pain changes.

The exhibition will be on view until 2 April 2022.

Deborah Graziano (Castrovillari, 1988) graduated in mechanical engineering and, after a few years, decided to dedicate herself to artistic research. In 2019 she exhibited in Florence at the ON Art Gallery with the show “In corporeo” curated by Romina Sangiovanni. Winner of two prizes at “Paratissima Multiversity” in Turin, in 2019, in 2020 she exhibits in Artiglieria during the exhibition “C.R.A.C”, curated by Rosanna Accordino and Ludovica Lamoure and at “Paratissima Talents”, curated by Francesca Canfora. In 2020 her first solo exhibition, “Amor Vacui”, curated by Roberto Sottile, was held in Cosenza.

Camilla Marinoni (Bergamo, 1979) graduated in Sculpture from the Brera Academy of Fine Arts in Milan with a major in Art Sacra Contemporanea. During her artistic career, she attended various art courses, including the “corso d’eccellenza di Scultura, Gioiello e Design” at the TAM Centre in Pietrarubbia (PU), headed by Arnaldo Pomodoro, under the artistic direction of Nunzio; in Madrid, the performance art practice and theory workshop with Abel Azcona and the “Free unicorn” workshop at the GAMeC in Bergamo with the artist and actress Chiara Bersani. In addition, she has been part of solo and group exhibitions.