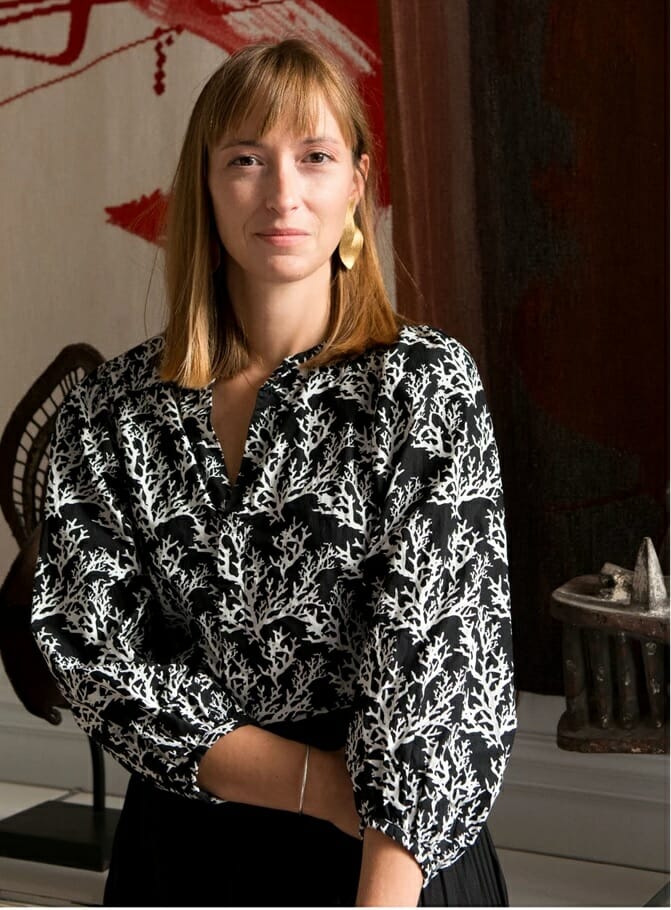 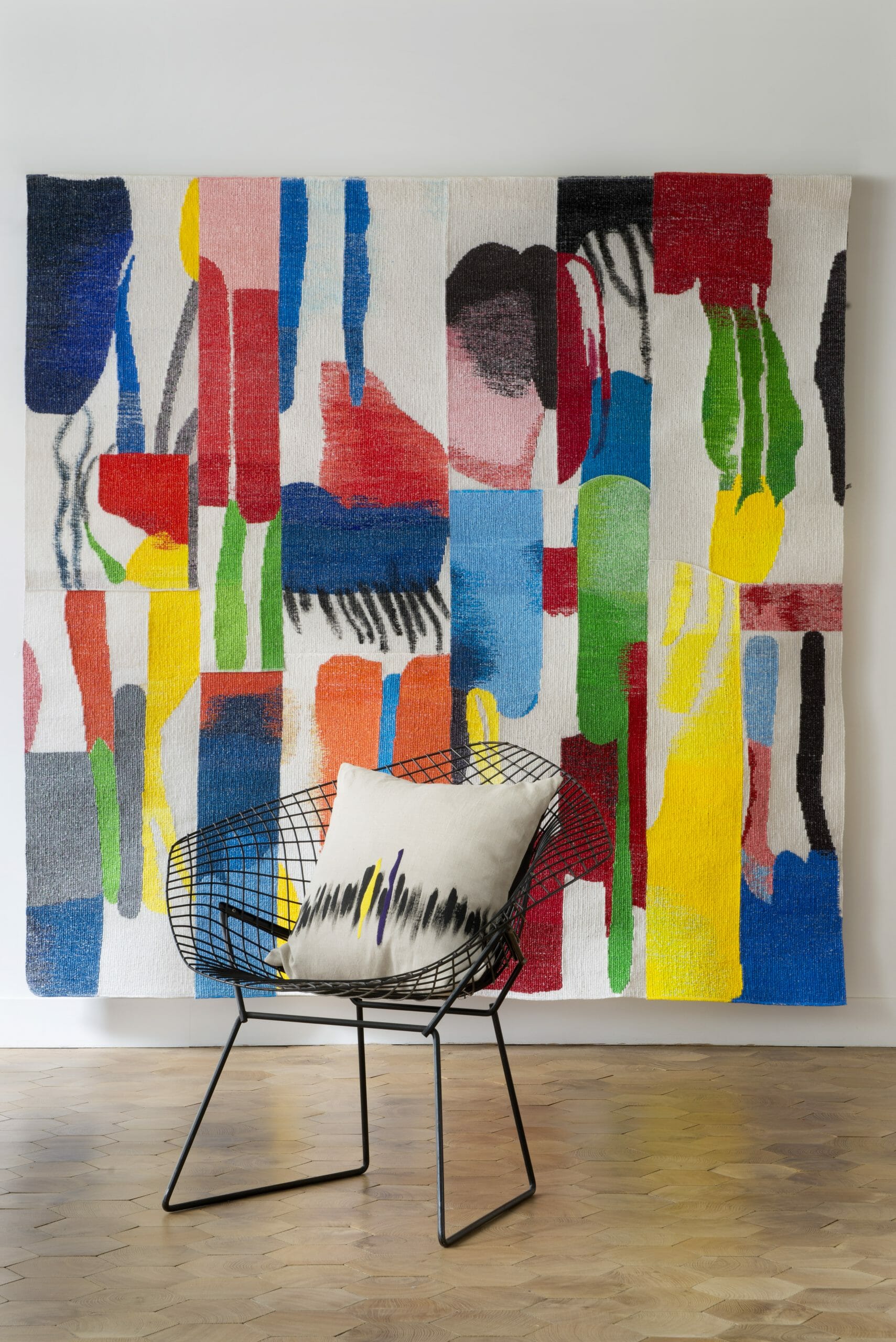 Françoise Paressant (born in 1944) studied at the Ecole des Beaux Arts in Nantes.

It was an aesthetic shock, that of a work by Miró, which made her want to become a painter. But it was the immense tapestry of the Apocalypse in Angers, as well as the Lady of the Unicorn in the Musée de Cluny, in Paris, that gave her the impetus to become a painter who weaves her paintings. It was there that she decided to merge painting and weaving and create her own woven murals. She likes the idea of constructing the image and its support together and the idea that the painting reveals itself in the material.

She approaches the craft of weaving in complete freedom, without the weight of a learned technique.

Her work is often compared to that of Sonia Delaunay

What interests her in Sonia Delaunay is the diversity of her preoccupations: pure painting, but also applied arts, fabrics, monumental adventures with frescos and theatre sets or opera costumes. This parallel between their work is based on the absence of perspective and naturalism or on the preponderance of strong colours and geometric forms, which in a way links Françoise’s work to Orphism. But what stands out most is the superiority of colour over form.

With the distance, one perceives a great variety in the writing. But the language of Françoise Paressant remains colour. Colours, rather vivid and frank, in the form of lines and masses, opacity and transparency, dialogue with each other, juxtapose or clash. White, which plays an important role in the range of colours, is not simply a background, but the weave and breath of the colour.

The technique of tapestry corresponds best to her writing

Françoise Paressant first started painting on paper and gradually, almost by chance, turned to tapestry, which quickly became her main means of expression.

In an interview, she says: “the woven material gives flesh which brings a particular vibration to the shapes and coloured lines”.

Refusing the border between painting and tapestry, she creates what she calls “a painting- wall”. She respects the tapestry technique which requires great rigour while sometimes allowing herself to add colour with a brush to give more life and even introduce a slight dissonance.
Her first period of weaving ended in 1980 and remained silent for 10 years: white had taken over all other colours, only the technique remained as in 10 Years of Silence

The jubilation of “doing” & the praise of colour:

Her preliminary work is very numerous, she creates series of models, small formats ranging from collage to cutting and touching on all kinds of materials: wood, paper, plastic, etc… This almost bulimic research prior to the creation of each piece allows Françoise Paressant to capture the unexpected and to invent her alphabet. She considers a small collage as much as a large tapestry, she eliminates any hierarchy, and finds a balance in the back and forth between these two worlds, one very free and the other very thoughtful.

For Françoise, painting, dyeing, cutting, tearing, crushing, gluing, sewing, penciling, is the jubilation of doing. These innumerable paths are the soil that will give rise to a tapestry. She then asks herself the question of dimensions, necessarily larger, while maintaining the proportion between the line and the surface. In this case, lightening is essential to give the motif presence and accuracy, without being parasitized by embellishments: the colour finds its simplest expression, that is to say the strongest. Then come the long weeks of realization which require patience and rigour, allowing him to give shape to this image, but also to take a step back and to refocus before tackling new creative experiments.

This is how she reappropriates the technique of tapestry, a technique she has mastered but by changing the material, such as substituting polyane (plastic) for wool.

She plays fully with its texture, its smoothness and its shine. She plays with the mixture, associating wool and paper, marrying shine and matt, letting the material absorb our gaze or reflect the light.

We can thus clearly see the emergence of a Paressant style, or rather a manner, a sense of experimentation with the material, and a palette of frank colours, which make it possible to recognise a work by Françoise – while at the same time being perpetually surprised. For the artist’s writing is renewed with each material she works on.

All her productions, from sewn works to “tapestries”, fully assume their pictoriality and mark their detachment from the domestic function for one, or the craft function for another. All his productions are autonomous works in their own right. They thus testify to the artist’s refusal to submit to the unfounded division between minor and noble practices.

More on the artist :