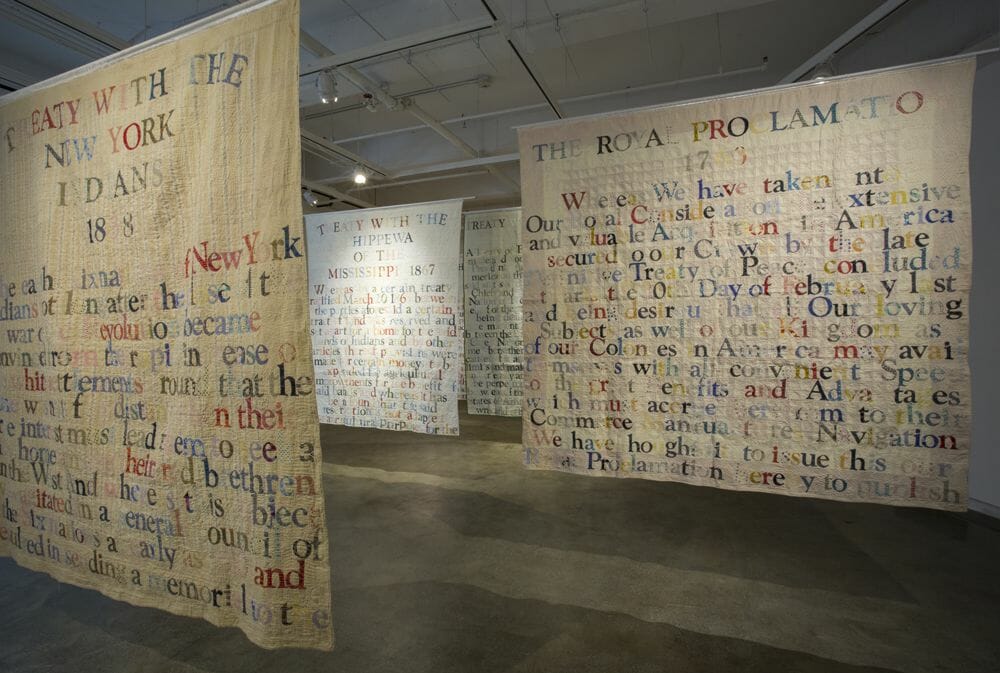 Gina Adam’s cross-media studio work includes the reuse of antique quilts and broken treaties between the United States and Native American tribes, sculpture, ceramics, painting, printmaking and drawing.
She is a descendant of both the indigenous (Ojibwe) and colonial Americans and she is fascinated by stories passed down, both from her own familiar heritage and those told by others. “I believe that the passing down of memories is what keeps our genetic heritage alive”.

From her Broken Treaty Quilt series:

“The first use of the term ‘quilt’ is credited to the year 1555. But for the Native people of this country, my people, the quilt and what it represents transcends modern time keeping.

Yet, my quilt project has everything to do with particular, painful moments in so-called modern time: when ‘white man’ broke his promise over and over again to the originals settlers and people of America: Native Americans.

I have been cutting out the letters of entire Broken treaties–these were pacts written by the United States Government and signed by Native American Tribes. These pacts promised the tribes money and power in exchange for the rich land they called home for possibly thousands of years. The Government took the land; however the Tribes were left penniless.

I have chosen to place the broken treaty onto antique quilts that are roughly the same age, and appear worn and broken. In fact, they could have been made at the same time the treaties were drawn up and signed.

While it is difficult to know for certain who made the original quilts in the project, there is reason to believe they’d been thrown out due to their worn appearance. In my view, not unlike the Native people.

I am taking the burden of the broken treaty placing it on top of the work of the original Colonists. Putting the words of the Broken Treaty on quilt subjects the Colonists to the truth. This is my truth; I sew the words, powerful speech, for my people, for my family, and for myself. It is an act of giving back the misuse and abuse of power.
My greatest hope is that this quilt inspires a movement of healing and prosperity. There is no room for broken treaties”.