Grazia Inserillo: being, living and evolving in the narrative thread 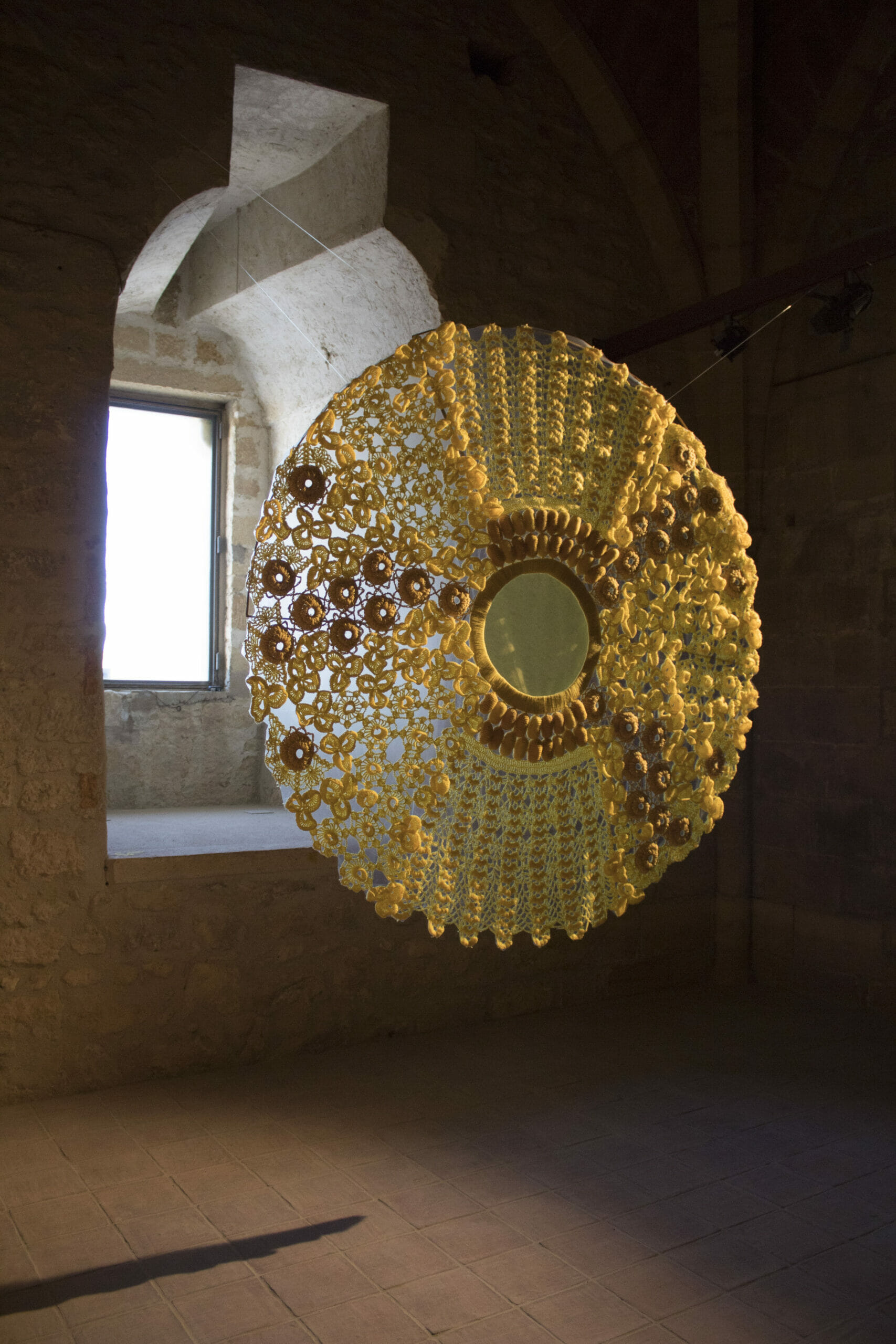 Grazia Inserillo was born in Palermo in 1988, her life focus is investigating the anthropological aspect of “ being and living “,  starting with the traditional jobs of her own family and rediscovering the art of weaving. From this ancient activity, Grazia Inserillo begins her artistic research,  which , in the last years brought her to exhibit even big textile installations in different exhibitions in Italy, Germany and the United States. Her work was awarded in international contest: “ Arte y Enfermidades “ in Valencia, the FAM Giovani Artisti Siciliani at the Fabbriche Chiaramontane  Agrigento, the award of the BID biennial International Woman of Trieste, the “ Best 15 Prize “  in Tourin last year. Moreover, some of her works have been acquired  in the permanent collections of contemporary art in the museums of Palermo, Trapani, Salemi and in the Polytechnic University of Valencia.

You wrote that your role in “nell’atto di tessere è duplice: dipanare le matasse per vedere in modo chiaro e annodare per non perdere, non dimenticare – weaving has a double function: to unravel the skein in order to see in a clearer way and make knots in order to not lose or forget “. What does it mean? And where does the thread bring you to?

The thread is the medium that allows me to communicate with my past and with the people that  have been part of my personal story. Everyone has its own skein to unravel and for me it is fundamental to take care of it, to untie the knots and to leave place for the future. I can’t ignore neither what has brought me here today, nor leave unfinished business. It is a fundamental activity which assumes an apotropaic and healing value . Unravelling the skein means maintaining a certain distance from the events, in order to not be absorbed by them.  It means taking care of the little deaths which we suffer, making a reconciliation with them in order to leave room to life.

At the same time, unravelling isn’t enough, we have to create threads, strong points, safety anchors: my safety is linked to the memories of the events and the important people of my personal life. As a matter of fact, weaving is one of the ways that I prefer to maintain alive this historical and mnemonic bond with my loved ones and my origins. Moreover, this allows me to weave my story with the world’s History, my memory with the universal archetypal images and memories.

During our conversation you were ironic about being woman and coming from Isola delle Femmine ( Sicily ). The female universe is fundamental in your artistic production. Concretely, how much and how is the female universe present in your works?

The female universe is constantly evoked in my work, but I would rather speak of “female cause“ instead of female universe. The origin of the story I tell is my personal story and the sum of my family’s stories: I was thought to be born as a male according to the doctors but , instead ,  I was born female . Once my grandmother saw me just born she yelled: it was a clear declaration of status which comes to my mind frequently and powerfully.

I often reflect on the disarming quote of the sculptor Louise Nevelson: “I am an artist who was born woman “

Being a woman has always been a disgrace for my gender and I’m not referring only to my own story or to the stories of the women of South Italy but to all the women of each world’s tribe or population. And I want to talk about this disgrace.

For what concerns the name of my birthplace, Isola delle Femmine (the Women Island), we could think of an elegy to the women of the island but actually it is linked to a story of women’s abuse. According to the legend, on the island there was a feminine jail on the top of a tower where the women were emprisoned. Year by year, I have begun giving a universal value to personal stories focusing on ancestral memories and archetypal images, so that everyone could feel to be part of this big story, aroused by the weaving.

You use different fibers in your works but wool seems to be the one you prefer. Is there a symbolic reason or it is just a technical choice?

Technically, wool allows me to build big textile installations. Thanks to the tactile quality of wool (a rough and coarse thread), I’m able to create a dynamic and vibrating surface in which the contrast between full and empty spaces, between lights and shadows is fundamental for the comprehension of the textile work.

However, evidently, the use of wool is not only a technical need: the fiber maintains the body temperature constant (this happens to the Tuareg people in the Sahara desert who wear exclusively raw wool to isolate their body from the external temperature).

So, the symbolic value that I confer to this material is undoubtedly preserving, guarding, enclosing, embracing, warming and keeping: these symbolic and technical values, characteristic of the wool, are the same qualities of women / mothers who take care of their loved ones and homes.

In this way, the public is welcomed by a “maternal“ work suggested by the material itself. The result is that observers are themselves embraced in a warm space.

Red. A primary color,usually associated to blood, passion , martyrdom , sacrifice. “Sacrifice“ is a term often used in your speeches. What is, if there is one, the connection between this color you choose for many of your works and the sacrificial experience you often referring to?

Red means sacrifice and martyrdom but even innards. It is a color that at the same time indicates a loss, as when a sacrifice is fulfilled  but embodies even a rebirth,  as it is the color of life if we think for example of the childbirth. The act of giving life goes through a sacrifice: you lose something to acquire something else. And everything comes from the inside, the innards. Red is even the symbolic color of women who continuously sacrifice in order to donate, letting something die to give life to something else in a eternal circle.

Through the influence of the memories of my personal story, I tell a universal and ancestral tale of women through the textile art, intertwining with the world’s History. All this brings me to red, which becomes the medium of salvation.

Your installations transform the doily – traditionally considered as an handcrafted and homemade work – in big textile compositions . Volumes no longer occupy a physical important space or transform invisible objects in big works of art. The negligible element becomes the main character of the scene: is this the redemption of the ones who aren’t (weren’t) able to express their voices?

Undoubtedly, there is the will of making the silence present. A silence that has lasted centuries. The women realized doilies head-down in the silence of their houses with bow and perhaps even obedience.

My tapestries, suspended in the air, are macroscopic visions of “doilies“ which, instead, lift the public’s heads up . They don’t just occupy the space but they determine it: they are soft sculptures, oversized, clear manifestations of a work that deserves respect. As a matter of fact, in each knot , in each stitch of the crochet hook, we can see the patience and the typical thoughtfulness of the women / mothers that knotting try to mend the relationships and the family dynamics that fall apart. How?  By embellishing a domestic life that appears as the decorative doily – always placed under the valuable objects and never considered as a valuable object itself.

The “doily“ is a great symbol of the devotion of women who have the task ( socially imposed ) and the gift (naturally given as they are mothers) of healing others’  wounds at the expense of their own emotions,  safeguarding the appearances.

So embroidering is not only a matter of pleasure.

What does the round shape of many of your installations/works evoke?

The circle is anthropologically considered as the symbol of the ancestral feminine . It is a closed and finished shape which, however, encloses endless shapes, as an uterus giving life: it is a unique soft and maternal line capable of enclosing both the death and the birth of an image, in a circular and perpetual motion. So, the circle is the symbol of the passing of time, as the cycle of seasons or, in general, the time of History, consequently the time of memory . In the name of this memory, in my work the circolar shape evokes the looms, place where the embroidery takes life. In this way, the circle itself becomes also a place: it is a shape that differs immediately from the others which has its presence and weight in the composition of an image, and often becomes a landmark in it; the place where the gaze lands.

We are in the era of technology, video art and performance. According to you, why do many young artists choose as a medium the thread and other old techniques as weaving or the crochet hook?

On the contrary, the textile works, evoke warmth and their tactile perception and materiality allow the public to participate in an active way in the artistic work: the contact between the public and the textile work is a contact of first degree, which means unfiltered by other mediums as the screen or the narrator’s voice (it can happen in the performance).

The public can interrogate the work through the tactile experience of the creases of the surface, of the tactile colors, of its texture: they are two different stories in comparison, one of the work and the other of the beneficiary, and most of the time the public finds similarity and correspondence with the textile work, entering into an intimate relationship with the textile work, where it is embraced in a maternal way, starting from the material by which it is made.

Moreover, recently, we are experiencing a revival of the “know-how “ and of the “hand-made“ which is linked to the rediscovery of the Fiber Art: the public, in front of a work of textile art, becomes part of those ancestral memories and archetypal universal figures aroused by the touch, typical of the fiber works.