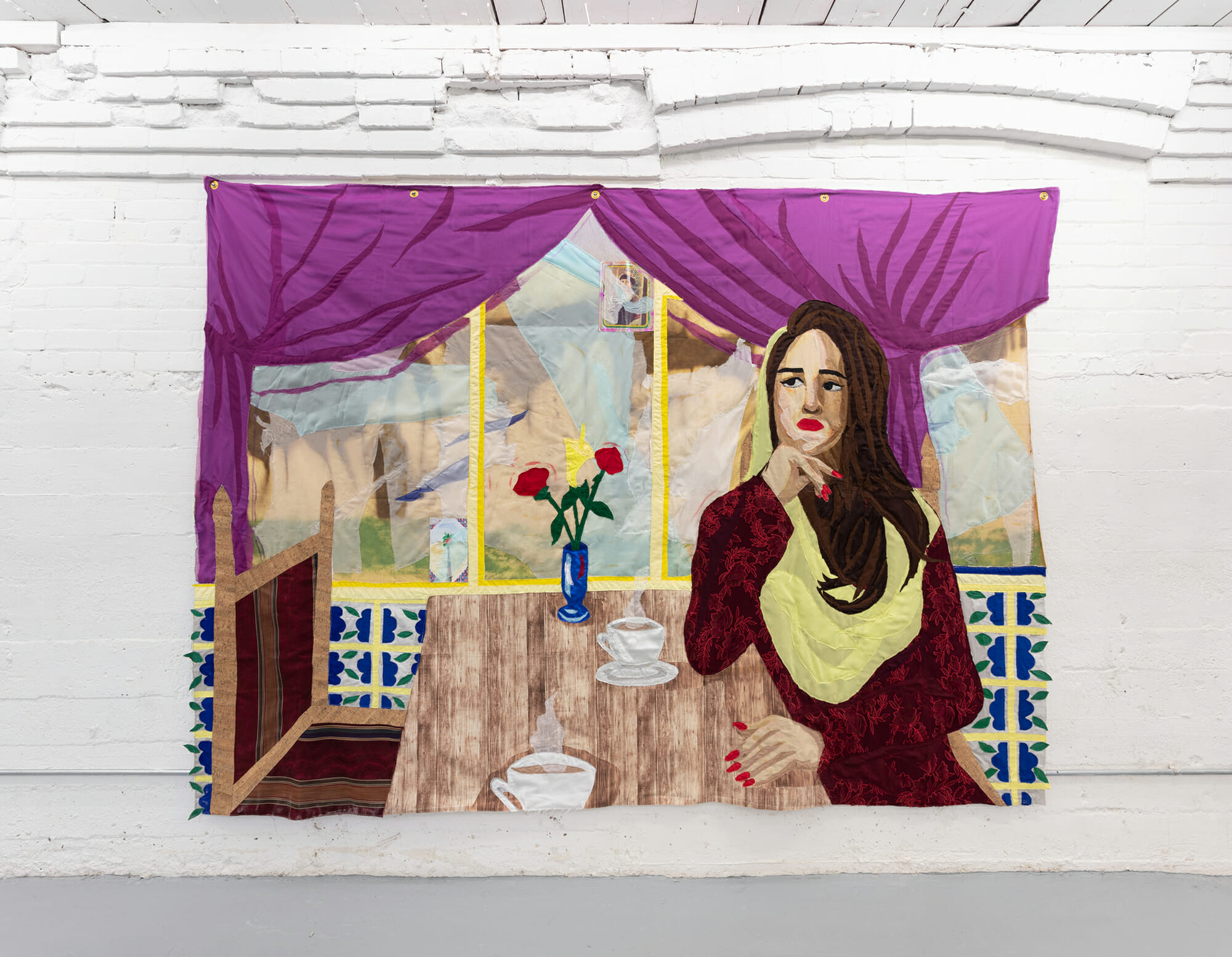 In this most recent body of work, Amiri continues to examine the ways in which gender, social norms, and larger geopolitical conflict impacts the daily lives of Afghan women.

The work in this exhibition emerged from conversations Amiri has been having with cousins, aunts, and close friends still living in Kabul. The women speak about the potential return of the Taliban regime amidst the ongoing US-Taliban peace talks, and Amiri notes, “After speaking with them over the past two years, I have found they are predominantly concerned with maintaining their basic human rights and the progress Afghan women have made in education, employment, and their overall role in society…”

Drawing upon these stories as well as her own personal memories, Amiri has created a series of immersive, large scale portraits. Set within coffee shops, on rooftops, as well as the outskirts of the city, these works hover back and forth between public and private spaces, creating a sense of intimacy while depicting a more urbane and cosmopolitan existence.

The fictionalized subjects within these portraits are similarly nuanced, evoking complex, multifaceted lives that reflect a myriad of lived experiences. Combining sewn textiles with hand painted elements, these vivid, richly layered scenes explore such universal themes as fear, longing, love, and hope, while drawing attention to the precarity of living under the constant threat of social and political upheaval.

Imbued with a sense of resiliency, these are ultimately hopeful portraits. Assiduously constructed piece by piece, there is a sense of care that permeates all of Amiri’s work. Through these carefully orchestrated assemblages, a renewed sense of possibility emerges.

Hangama Amiri (b. 1989 Peshawar, Pakistan) holds an MFA from Yale University where she graduated in 2020 from the Painting and Printmaking Department. She received her BFA from NSCAD University in Halifax, Nova Scotia, and is a Canadian Fulbright and

Post-Graduate Fellow at Yale University (2015-2016). She has exhibited nationally and internationally in New York City, Toronto, France, Italy, London (UK), and Bulgaria. She was the recipient of the 2011 Lieutenant Governor’s Community Volunteerism Award, the 2013 Portia White Protege Award, and in 2015, her painting Island of Dreams won a runner-up honorable mention at RBC Canadian Painting Competition. Amiri was also an artist-in-residence at the Banff Centre for Arts & Creativity (Fall 2017), Joya AiR Residency Program in Almería, Andalucía, Spain (Winter 2017), World of CO Residency program in Sofia, Bulgaria (Spring 2018), and at Long Road Projects in Jacksonville, Florida (Summer 2019).