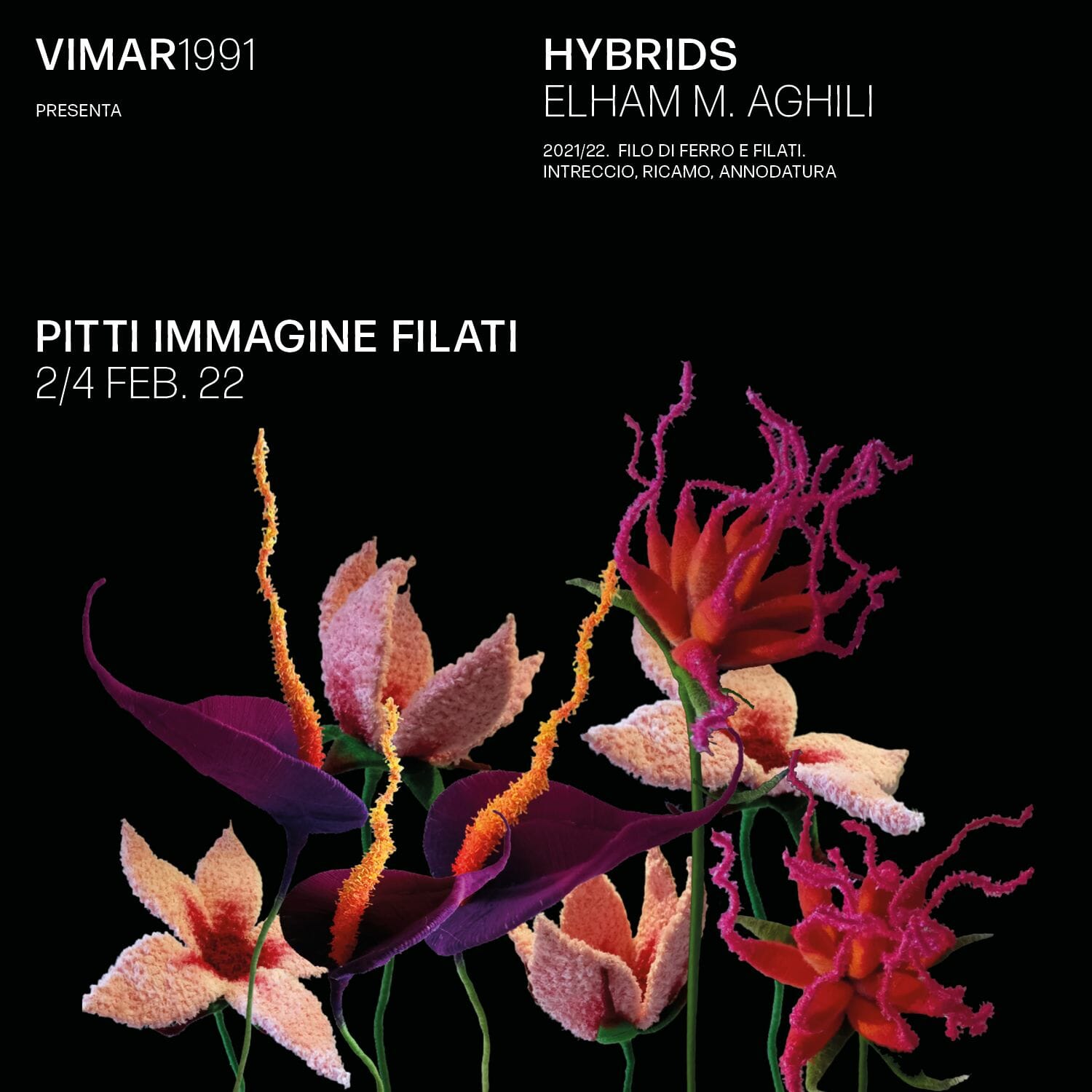 VIMAR1991 brings contemporary Fiber Art to the reference event for the world of yarns and knitwear at an international level. Its stand at the 90th edition of Pitti Immagine Filati at the Stazione Leopolda in Florence  hosts HYBRIDS, a large textile installation by Elham M.Aghili.

Two interventions made by the artist, the greater of which is a large work consisting of about forty elements for an extension of over five meters, almost one and a half meters deep and over two meters high. HYBRIDS is a modular work born as part of the Heritage project in Bologna and developed for the first time in 2021 at the Municipal Art Collections of the city. Since then, the installation has been exhibited in Milan, Venice, Sassari and Spoleto, in a continuous metamorphosis which, while preserving the conceptual meaning, changes the combinations of its elements at each stage of this journey, taking on unprecedented but always equally immersive and engaging forms.

Aghili’s textile gardens are not faithful portraits but rather the narration of an illusory nature that the artist creates through the meticulous  interweaving of yarns, giving the viewer an imaginary environment on the uncertain border between the real and the fantastic. A game of deceptions that forces reflection on the meaning of wild and domesticated, where the former is almost always the result of the manipulation and continuous intervention of selection and human influence. Her installations immerse the observer in a “botanical sample – the artist herself writes – where visions and configurations redefine a new hybrid nomenclature that alludes to an evolving nature“, plausible but not true, which forces the public to reshape their own perception of reality.

The insertion of new elements was here facilitated by the materials provided by the company, the yarns of the new EDEN SS23 collection inspired by ancient cities with lush gardens – Elenin, Babilonia, Ninfa, Thule, Byzantium, Nara, Lixus, Granada, Taxila.

VIMAR1991, in fact, is part of a growing number of companies whose sensitivity towards art is equal to the attention to urgent contemporary demands related to the environment and to virtuous business and industrial practices in compliance with ethical values ​​that can no longer be postponed.

Specialized in the production of fancy yarns with more than 180 thousand archival samples and a production cycle characterized by continuous research, from June 2020 VIMAR1991 has intensified an internal renewal that has as its cornerstones the traceability and sustainability of the materials used as well as the upcycling of production waste and is today a certified company.

ELHAM M. AGHILI (Sassuolo, 1989) has won numerous awards and mentions in national and international art competitions. For some years she has been studying the relationship between man, nature and space. The Persian origins of her family brought her into close contact with the world of carpets and their botanical iconography and, more generally, with all the textile medium.She has chosen yarn as an expressive language through which she creates meticulous and articulated surreal natures where yarn, a soft and shapeless element, is transformed into complex solid and concrete shapes. Her invasive and immersive installations are inspired by nature but hybrid in their details and keep the illusion between true and false, between real and imaginary constant.