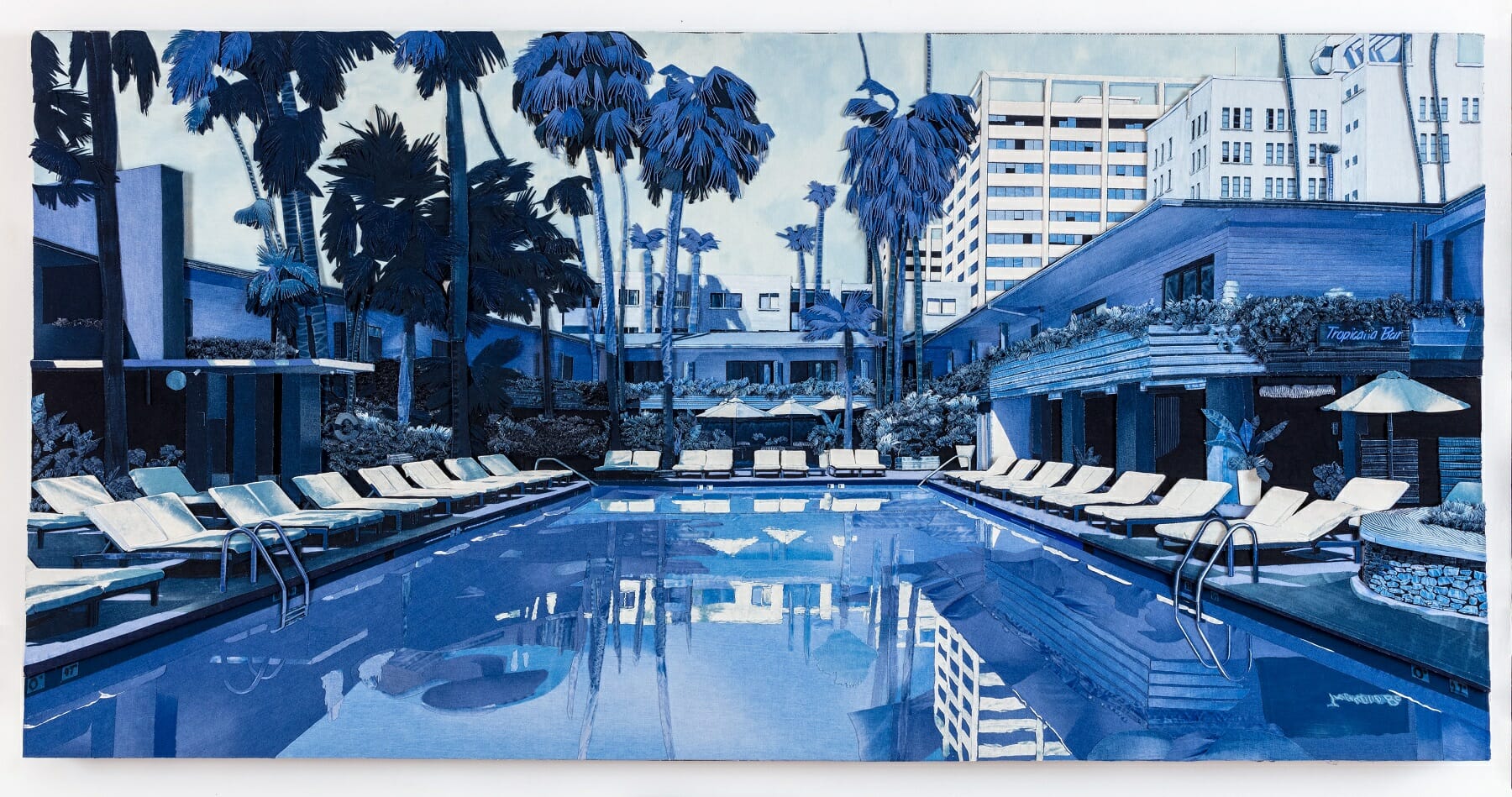 At first sight, it is easy to mistake Berry’s work for blue- or indigo-tinted photographs, but a closer look reveals that they are made up of layer upon layer of denim in different shades.

The contrasts between the different shades of blue visible in a pile of old jeans were the genesis of Berry’s unique art form. Soon, he began to explore the possibilities offered by the material and create photorealistic artworks. Berry only uses upcycled denim in his works. No colouring agents or bleach are used – only scissors, glue, and second-hand jeans.When working with denim, he began to understand the significance of his own and others’ relationship with the material, which is one that we are all very familiar with. Ian is of the opinion that the fact that that denim is highly recognisable opens doors to understanding and identification. His works reflect on contemporary events and phenomena, but also refer back to the cultural history of jeans.

Ian quickly became one of the most talked-about young artists, and Art Business News listed him as one of the most influential artists in the world by including him in their ‘30 Under 30’ list in 2013. In 2019, he was recognised by the denim magazine Rivet as one of the 50 most influential people who work with denim.Berry was born and raised in Huddersfield, England, which like Borås has a long-standing textile tradition. Ten years ago, Ian moved to Sweden and exhibited his art at galleries in Skåne and Motala. Since then his art has been exhibited all over the world, most recently at Museum Rijswijk in the Netherlands. The Textile Museum of Sweden is the first Swedish museum to exhibit a large, in-depth exhibition of Ian Berry’s works.

Today, denim is so well-established in pop culture that that it seems like part of the furniture. In the works displayed at Material World exhibition at the Textile Museum of Sweden, Berry’s works portray the fashion designers, actors, writers, musicians, and artists who immortalised jeans such that they became the classic garments they are today. The key people and style icons who made everyone want to wear jeans. Berry compares the history of jeans to the ongoing pandemic: Like the virus, they spread from person to person, and in the end took over.

”I have been interested in changing communities and urban areas, the fading fabric of our urban environment, if you will. I’ve been portraying social and contemporary issues and I have thought what better material to use than what I think is the material of our time, denim. But now, I have been looking more of what the material is and the stories behind it. Textilmuseet is the perfect location to show that.” says Ian Berry

“Ian Berry’s work is interesting and important on so many levels. There’s the ‘wow’ factor of the craft, the thematics, and the way in which his art shows how the textile material forms yet another dimension in art”, Malena Karlsson, Curator at the Textile Museum of Sweden, says.