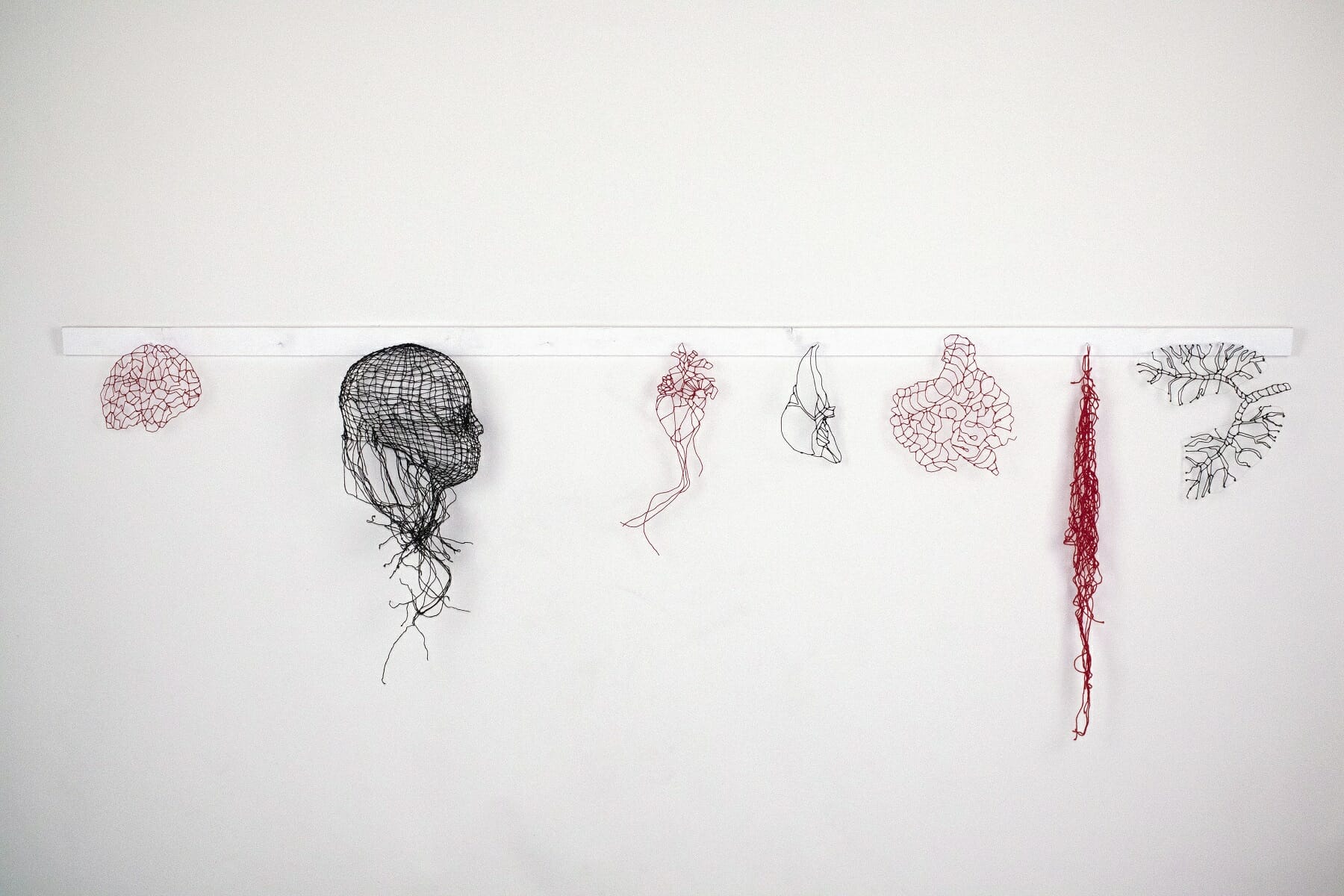 The “IL CORPO ESTRANEO” exhibition’s opening is the first meet-up for the new 2022 event season at SCD Studio, via Bramante 22 in Perugia.

The show will be on display from Saturday the 29th of January.

At the opening event, at 3.45 p.m., Giulia Santambrogio will perform “Io vado a pescare”, booking is required.

The body’s poly-semic nature is the exhibition’s core concept. The artworks inquire into the body’s role, function and perception in the new light shed by the pandemic that has irrevocably changed behaviour, relational dynamics and habits. Due to isolation and the distance between bodies necessary for self-protection, physical presence and tactile exposure to the world and reality have become increasingly rare.  Over the last few decades, the body has often gone beyond its functional role to become an end in itself; contemporary society has increasingly deprived it of the freedom to show the signs of time being a caricature of itself. Recent events have transformed the body into an increasingly immaterial entity, an image, almost a hologram. The whole daily routine has been virtualised – social, professional, recreational and emotional contact – highlighting the need to shape a different relationship and search for new balances.

Sophia Ruffini‘s reflections on the subject originate from food bulimia, which coincided with an overdose of information fed continuously during the suspended lockdown time. With “News Chips”, the artist draws a parallel between junk news and junk food: two ways of filling an insatiable void through compulsive consumption that transforms the subject into an object. A reflection that she develops further in “L’appendiorgani”, an installation in which the body, dissected and emptied of all further meaning, lies hanging like any other set of clothes, waiting to be worn only when useful or necessary.

For Giulia Santambrogio, the body is a network and acquires its whole meaning in encountering others. In her performance “Io vado a pescare” (I’m going fishing), she draws a parallel with the fisherman who throws and gathers his fishing nets for food. The network/body is a protection and a cage by which we run the risk of becoming entangled, a boundary that leaves ample space for contact with the outside world. The network/body is meant both as a protection and a cage in which we could run the risk to be entangled; it is a boundary that leaves ample space for the contact between ourselves and the world. “The net” is the performative garment in which clothing and body coincide; one is the other’s alter ego taking after its form, bringing together the body and the inner self into a unity only completed and enriched by the essential relationship with the other. This is not the case for Davide Viggiano, who sees in the physical distance between bodies, resulting from the pandemic, the emergence of a new form of relationship, a more fluid one, filtered by technology and, at the same time, the development of a closer and more physical relationship with nature.

A sort of homecoming, the re-evaluation of manual activity and the home as a sphere of intimacy, an extension of the body that includes affections. Viggiano looks at humankind through a post-anthropocentric but also post-organic perspective. He identifies the human being as an entity that connects with all life’s manifestations, including animals and plants, in a relationship that takes on new meanings. His “Homo Fa(i)ber” is a hybrid, composed of a bio-plastic fabric, a skin-dress that constitutes an identity in its material’s features. In its de-humanisation, this creature paradoxically assumes the most significant meaning of its humanity.

Sophia Ruffini (Macerata, 1997) graduated in Decoration from the Macerata Academy of Fine Arts, where she is currently pursuing a Master’s degree in Contemporary Sculpture. She mainly works with the medium of textiles. Starting from a reflection on the body, the artist investigates the feeling of the skin, which is a prelude to research into the social body through current issues. She has exhibited, among others, in the Casamatta Review in Fano, in the NICE section at Paratissima Turin and at the Festival del Tempo in Sermoneta.

Giulia Santambrogio (Monza, 1996) graduated from the Brera Academy of Fine Arts with a degree in Valorizzazione dei Beni Culturali e in Arti Visive, with a major in painting. During her Erasmus in Marseille, she got in touch with the Austrian artist Iris Dittler. Her creative method, based on the interaction between body, graphic sign and sculpture, contributed to consolidating her multidisciplinary practice. Her works contain multiple identifications between the real, the conceptual and the metaphorical and come up against the paradox of drawing a body that draws itself, of weaving a body that weaves. She has exhibited in various group shows in Milan, Sofia, Szczecin and Marseilles.

Davide Viggiano (Potenza, 1994) graduated in Textile Design at the Istituto Statale d’Arte in Potenza and later graduated in Decoration at the Accademia di Belle Arti di Foggia, completing his training at the Accademia di Belle Arti di Brera. His artistic research explores the boundaries of the skin, the membrane that, by covering the body, is the link between its interior and exterior, and the zone where nomadic identities dwell. He has participated in exhibitions and awards, including “Artefici del Nostro Tempo 2021” promoted by the municipality of Venice on the occasion of the Architecture Biennale; “We as Nature” for Rome Art Week 2020 (RAW); Premio Nocivelli and Premio Brera-Bicocca (2018) where he was selected among the winners.