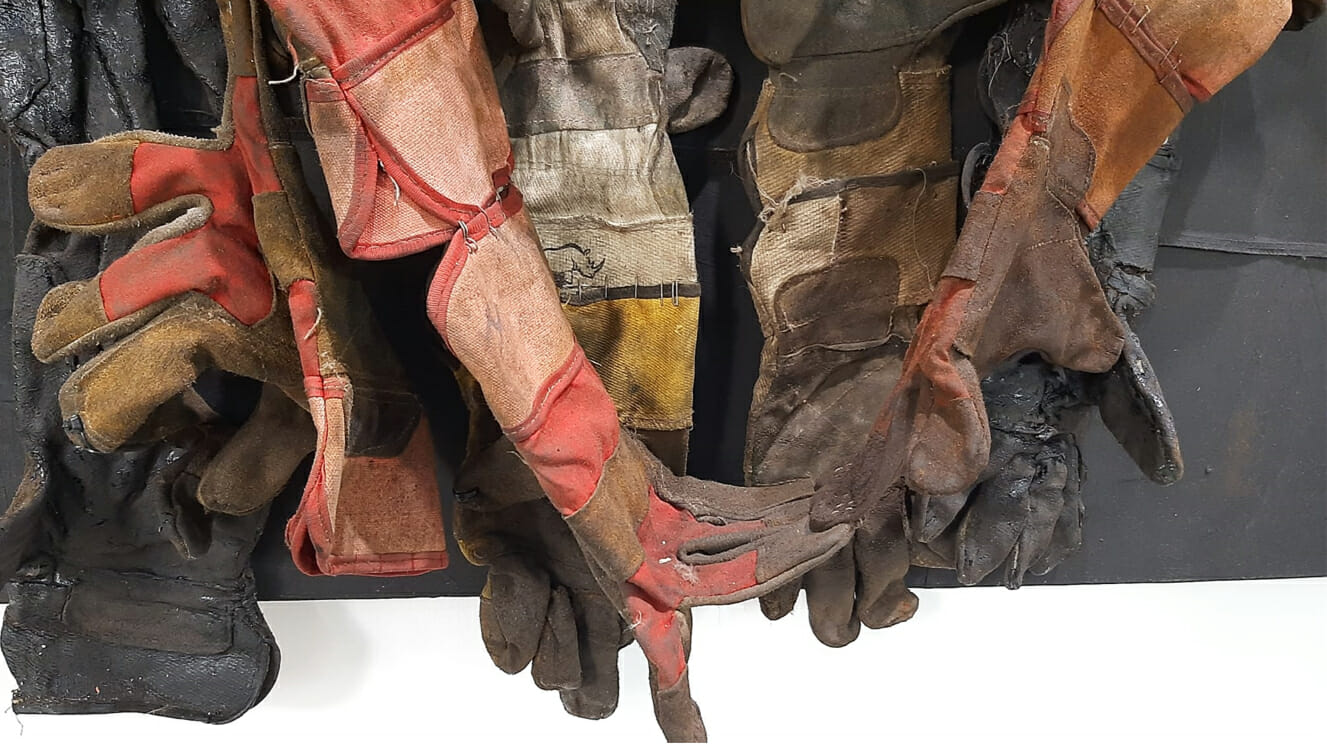 It seems a long time since the only textiles on show at major art fairs were small Boetti pieces.

However, in the 28th Artissima edition (the fifth in a row directed by Ilaria Bonacossa), fibre art played a significant role.

Among the more classic carpets and tapestries, we find textile fibres and embroidery inserts contaminating even the most traditional paintings, which sometimes simulate textile appearances. Fibre art’s presence is significant, and not only among foreign galleries.

Milano based gallery Eastcontemporary features, among the newies, a selection of artists from Eastern Europe, including the Czech Eliška Konečná presenting works in which embroidery shapes bodies tangled in upholstered velvet.

At Sara Zanin (Rome) on display, three very delicate works of Mariella Bettineschi from the 1980s in organza, feathers, tulle and golden hoops, while at Repetto Gallery (London), there is a small embroidered book by Maria Lai from the same period.

At UNA Gallery (Piacenza), we find the Spanish Josep Maynou with a large Moroccan carpet, while at Prometeo Gallery (Milan), a cut-out and embroidered carpet by Ruben Montini.

Foreign countries are more generous towards fibre research, allowing space; some stands are entirely dedicated to the medium. The first of these is Bruthaus (Waregem, Belgium), which establishes a robust dialogue between Thomas Renwart‘s textile works and Boel Willem‘s iron and rope objects covered in paint, shaping an environment similar to a production workshop.

Moroccan Safaa Erruas, from 50 Golborne (London), is on display with two ethereal installations intertwined with needles, small cotton cocoons and long metal wires. Thread tangles, with the spider, at Nicoletti (London). Traces of fibres can also be found in the Swiss gallery Urs Meile (Lucerne-Beijing). Their booth features Marion Baruch‘s torn polyester fabrics and Ju Ting‘s works where heavy acrylic is thrown on a board to skillfully simulate textiles’ soft folds, even though they are not fabric at all.

Fibre is to be found at Arcade (London-Brussels). Caroline Achaintre moves into primitivism, presenting masks and tribal totems woven into long threads of dangling coloured wool.

A solo exhibition of Chinese artist Miranda Fengyuan Zhang is on display at Capsule Shangai. She shows interwoven wool and fibre pieces inspired by her grandmother’s work unravelling old family wool jumpers to make new extraordinary ones, with surprising chromatic effects. This inspiration is shaped in barely sketched landscapes where the familiar “warmth” emerges.

Encounter (London) choose a unique artist, Alexis Teplin. His skilful “cut and sew” of coloured linen fabrics creates works of substantial visual impact between textiles and painting, a collection of clothes made by the artist complete the exhibition.

Richard Kennedy explores fibre incursions, although not with much force of meaning. He brings two paintings on canvas to Peres Project (Berlin) with attached synthetic fibre braids similar to those he wears. The English Brent Wadden presents more influential works at Peres: two sizeable hand-woven wool carpets with alternating black and white stripes.

Isabelle Van Den Eynde (Dubai) exhibits Hoda Tawakol, who uses fibre freely as one medium among others to create a jungle of half-animal, half-vegetable monsters. In an explosion of colours, the artist’s turgid forms are closely linked with a reflection on gender issues.

Mor Charpentier (Paris) presents Italian Rossella Biscotti layers of used clothes in concrete spheres. Brazilian Camila Sposati, for Georg Kargl (Vienna), plays with layers of felt cut out to create three-dimensional geometries. Lydia Pettit uses upholstered fabric in her pieces presented by the Sébastien Bertrand gallery, Geneva. She analyses the body by dividing it into loose parts and completing the work with the portrait of a face in shadow placed next to it.

The most surprising result emerges when the fibre is used in its broadest sense. In other words, the use of soft, flexible materials demonstrates that locking oneself into rigid categories, even of support, does not generate creativity.

On a formal and conceptual level, astonishing are the works of the Iranian Samira Hodaei, represented by the Moshen Gallery in Teheran, and the South African Chris Soal, for WhatIfTheWorld (Cape Town). The former, who has already worked extensively with weaving and embroidery, seems to break away from the tradition of carpets and threads to create fibre installations with a material that is only a derivative of the yarn.

The artist uses large, black and red working gloves; tied together to form chains as if to shake hands, but (perhaps due to the wear and tear, or the dark colour) the impression they give is not one of solidarity but of injury, and ultimately death. Upon entering the booth, the feeling is tangible thanks to the gloves hanging, like meat in a slaughterhouse, from a hook, against a background of black drapes. The latter, Chris Soal, freely uses poor materials; first and foremost, caps and toothpicks become individual elements in a vast installation that plays and challenges the material logic of the medium. The beer corks, pierced and threaded through a long electric wire, become malleable material for creating luminous scales of apparently organic, zoomorphic elements, such as snake tails or octopus tentacles. The toothpicks, burnt at the top and crammed next to each other, produce effects similar to soft animal fur.

The Hub India made an excellent choice with works curated by Myna Mukherjee and Davide Quadrio.  Here, fibre appears (a little on the sidelines, but it is present) as embroidery of small red wounds in Ghanshyam Latua‘s black canvases, in a context of works that are different from each other but equally refined.

The overall impression is of avant-garde fibre art, mainly from non-EU countries, whose technical skill, delicacy, cleanliness and depth of vision provide a small but great lesson in moderation to Western vanity.

*Erika Lacava, graduated in Aesthetic Philosophy with a specialization in Visual Cultures and Curatorial Services, has managed the Zoia Gallery – a contemporary art gallery dedicated to emerging artists. She is an independent curator, and she mostly develops projects linked to landscapes, preferring site-specific installations. She collaborates with contemporary art magazines and with an agency specializing in services for the arts and communication.