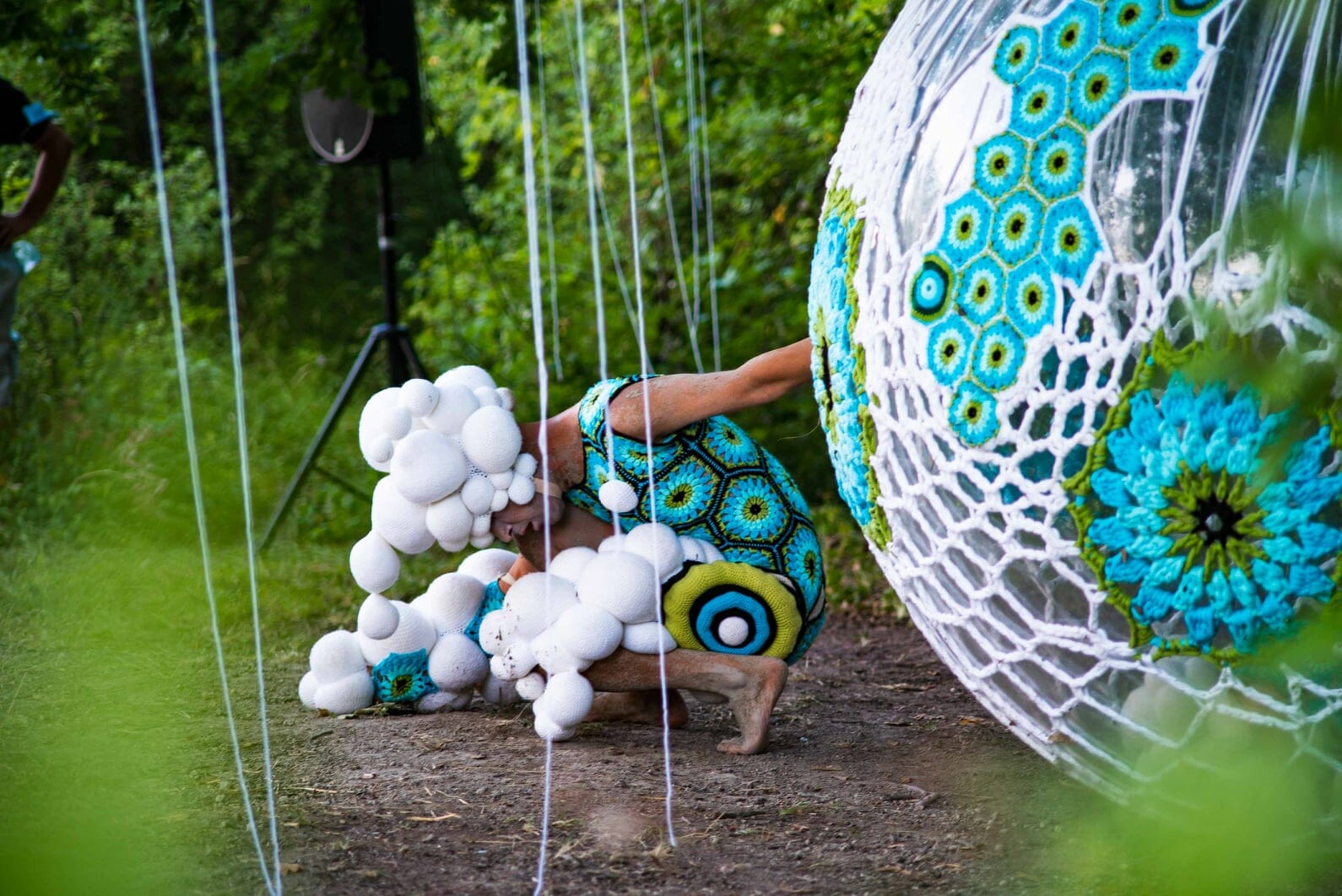 Textile art by Luisa De Santi, Performance design by Kdindie
in collaboration with the Youth Area Project of the Municipality of Trieste

IMAGO CELL is a co-creation project supported by Crochetdoll and Indiemotion.

During the 10th edition of the Scientific Research Festival, which will take place in Trieste from Friday 24 to Sunday  September 26, 2021 and  will be entitled “TAKE CARE. Science for sustainable well-being ” it will give space to a unique project of Fiber Art. In fact, during the researchers’ night, a work that combines textile art and performance art will be presented.

The interactive action between two humanoid bodies, without gender identity, makes the invisible visible. Cellular mitosis translates into an immersive textile performance and installation where the imaginative potential is generated and revealed. Perpetual motions and symbiotic interactions transform the urban space with a site-specific intervention that imagines and represents a new regenerative ecosystem.

“By observing the process of cellular mitosis, the division, multiplication and diffusion of cells, we have creatively translated this analysis. In the relationship of movements between two different fluid tissues, blood and lymph, we imagine the harmony between animal and plant species. ” (De Santi, Kidindie)

The human body takes shape from internal micro fractures and extends its architecture through the macro texture of outer space to reveal the fractal of metamorphosis.

IMAGO CELLS is a project started in 2017 with a small textile installation created with the crochet technique by Luisa De Santi: a study on the contamination of space through the use of modular textile elements. In 2018 the idea was developed as an animated space, thanks to the introduction of a performer. The experiment continued throughout 2019, through the creation of a yarn bombing, animated by an aereal circus action in a completely natural environment. During the same year a second performer Kdindie (Indiemotion) joined and the research focused on body architecture and textile / human body interaction. In 2020 the project suffered a setback due to Covid, however, during the late spring, the prototype work of Imago Cells continued, with the urgency to share positivity and hope and focus attention on the need to protect trees and green spaces in urban areas. Selected by AESON Festival (Udine) and InsOrti Festival (Bologna), the artists experimented with new possibilities for developing the project.

Luisa De Santi is an artist specializing in needlework and embroidery techniques in a three-dimensional and performative form. Through the symbolic use of threads she works on contents such as empathy, sharing, interconnection, affirming an individual artistic vision.