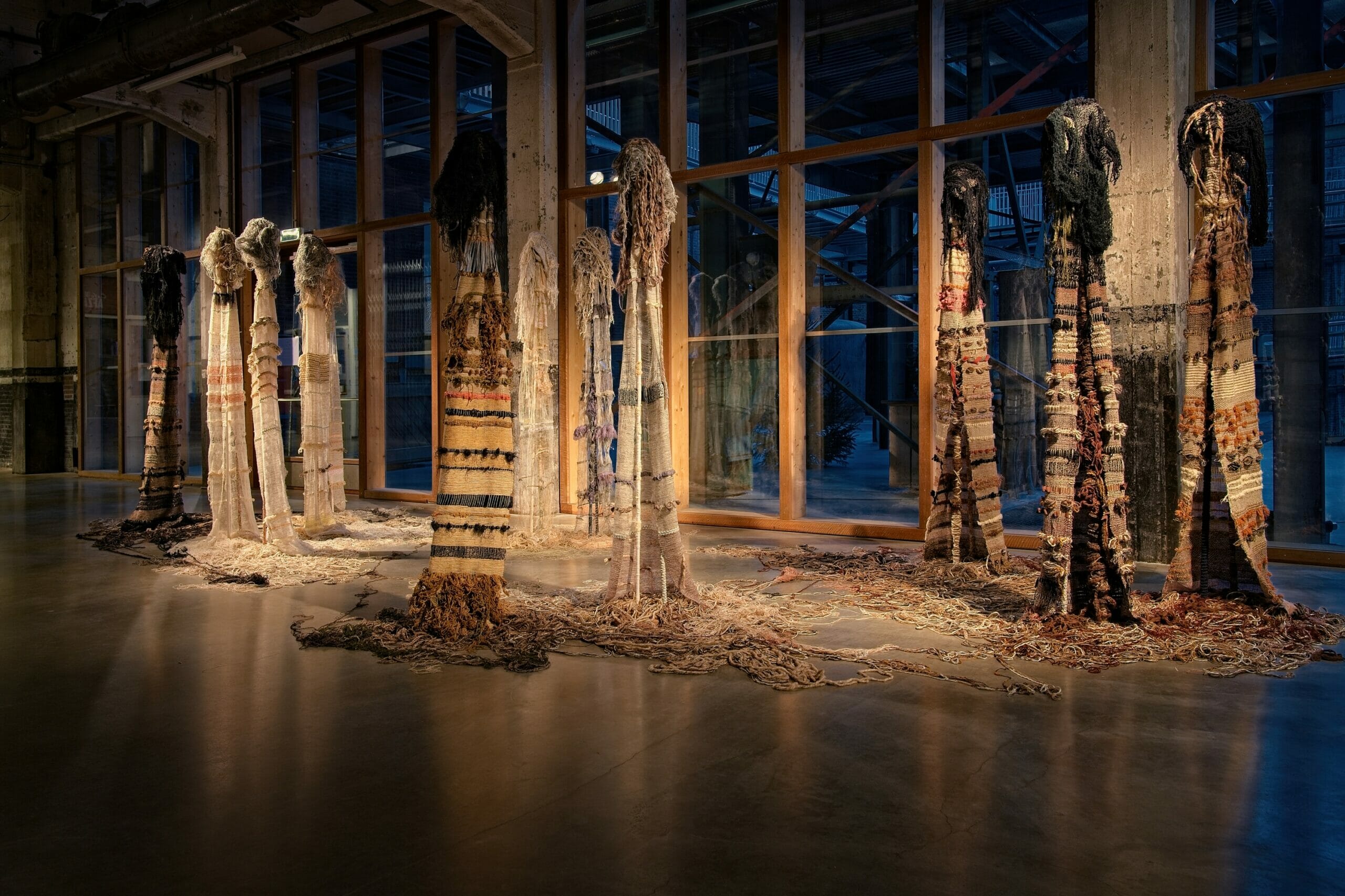 Anneke Klein is a fiber artist who works and lives in Zaltbommel, the Netherlands. Most of her textile artworks are expressions of her vision on social themes and are carried by minimalism and repetition.

She received a lot of appreciation at home and abroad for her work in recent years. “The Social Diary of the City” a sustainable society in terms and patterns, was selected for The Social Art Award 2019 in Berlin. Also exhibited at the 8th Biennial of Contemporary World Textile Art, Madrid and at Experimental Fashion & Fiber Art, CICA Museum in Seoul. In 2020 it was selected for Excellence in Fiber VI at the New Bedford Museum of Art, New Bedford, Massachusetts. Her work “Dating site” expressions of the inner desires, received the Bronze Medal at the 13th International Biennial of Fiber Art in Ivano-Frankivs’ k and is now selected for the 6th Triennial Textile Art of Today 2021-2022” which will started in september in Bratislava and will be gradually exhibited in five galleries of the Visegrad countries.

Why did you choose the textile medium as expressive language?

Originally I was educated as a goldsmith.(1982) My passion for weaving was born from a struggle with hard and cold materials, so I quickly learned to weave from a choice for warmth, softness in the materials.

After a period of designing and manufacturing clothing, I have worked on commission for the American minimalist Richard Tuttle for his exhibition in the Vleeshal of the Frans Hals Museum and for Alexis Gautier in the Bozar Museum Brussels. After that, I developed my own style for my (wall) objects.  As a goldsmith I learned to express in miniature, that’s really what suits me and also often apply in my textile works. Not as mini or micro textile art but as elements for the rhythm and repetition.

For example “Dating site”, expressions of the inner desires, in which I create 726 logo’s (6×4 cm) like the presentation of the images on dating site. Each logo is based on how I characterize an person around me or whom I meet by chance.

For your works of art you use an essential palette: white, black, natural colors. Is it an aesthetic choice or does it have other meanings? What is your relationship with colors?

Much of my work is based on the basic weaving technique of the plain weave in an open transparent structure. As in the world around me, I add a multitude of shapes, textures and structures. In this way I look at the everyday world through a symbolic lens and stimulates social awareness in myself.

Colors represent an emotion and are therefore too determining. By avoiding colors, I avoid oppression in reliving of the expressions. That’s why the only way I use a color is, subordinate and when I really want to strengthening an essence. Using soft tones, shapes, structures and textures, it’s the way I want to create my own language unconstrained.

Your installations almost ‘interact’ with the space. Can we say that the place that hosts them becomes part of the work itself?

By choosing to make a transparent fabric as the basis in my work, I want to stimulate interaction with the surroundings. This applies not only to the place that hosts them, but also to the interaction between my works and also with the viewer. I respond to this when developing my themes, such as in the installation “RT-L”, connections by simplicity, where I argue the liberation of pigeonholing. The mutual interaction between the 4 works and the place that host them plays an important role. This is prompted by out of the box thinking and the complexity of breaking free from ingrained behaviour.

I experience it as a gift to be able to exhibit at a location with its own dynamics. Don’t go into battle with this. To be challenged in finding a cohesion between the place and my works, discoveries and wonder if it works. To merge the theme of the work with the space. My work “Transient”, sense of time and mortality, fits perfectly in an old factory hall. But the series “Selfies” what do we show of ourselves, which merges with the polluted wall of a former grain silo is such a discovery and amazement of a new scenery.

What do you want to convey to the public through your works?

As already apparent from my answer to the previous question, I hope with my search and awareness of the chosen social theme, for recognition, insight and realization by the viewer. I consider myself an autonomous artist, my works are personal expressions of my world, I want to use them to give meaning and make meaning. My titles therefore often have a deeper meaning and viewers often experience an explanatory text about my work as an added value.

For example, I hope to challenge the viewer with my work “The Social Diary of the City”, a sustainable society in terms and patterns. The diary consist of 365 day’s, visualized in 4 quarters of 13 weeks. During a year, a daily social stimulus that I experienced, represented by a term was translated by me into a pattern. The changing society, the pressure on social cohesion, interactions from a personal interpretation, I allow this complexity to be observed within a regular grid.

In addition to my hand-woven/embroidered work, this project also consists of a document with the 365 terms that forms the principle for the elaborated patterns. These terms were printed in the same grid and afterwards also translated into English, Spanish and Korean for the exhibitions in Massachusetts, Madrid and Seoul. Those translation are for me again a moment of contemplation because the emotion must be preserved as its essence.

If the observer is attracted by certain patterns and challenged to make an association with his impressions and terms. Then recognition and doubts will lead to further investigation and awareness of his role within a sustainable society.

“The Social Diary of the City”, a sustainable society in terms and patterns, 2019, detail

Are there any artists or art movements whose work has inspired you and with whom you feel a particular affinity?

I find the ZERO movement from the 60s very inspiring. Don’t build on existing styles but start blank. Letting go of techniques, like Damask, Gobelin, Ikat, Quilt, Lace and so on, this is why I choose the basic technique of the plain weave as the starting point in my works. The weave with the most simple structure, however, with the most possible connections, a beautiful symbolism as the basis. Literally, as we say, “embroider on” from my feeling and intuition that is related to artist like Jan Schoonhoven and Piero Manzoni from the ZERO era, but also the abstract works of Sean Scully. Using shape and texture, applying weight and density, rhythm and repetition. Giving meaning to minimalist expressions I learned from the period during my collaboration with Richard Tuttle. The minimally sensitive and sometimes a sensual gesture.

What are your projects in progress and what next?

Recently I have read the books “The Black Swan” and “Antifragile” by Nassim Nicholas Taleb. It deals with the problems of uncertainty, probability and knowledge. The impact of the highly improbable and of things that benefit from disorder.

In this context I think about an installation which depicts a fusion of nature and man in which chaos and disorder are an essence. Where people are absorbed in a biotope and not the individual but the total system is central. Not the malleability, but precisely the vulnerability and the transience is the strength.