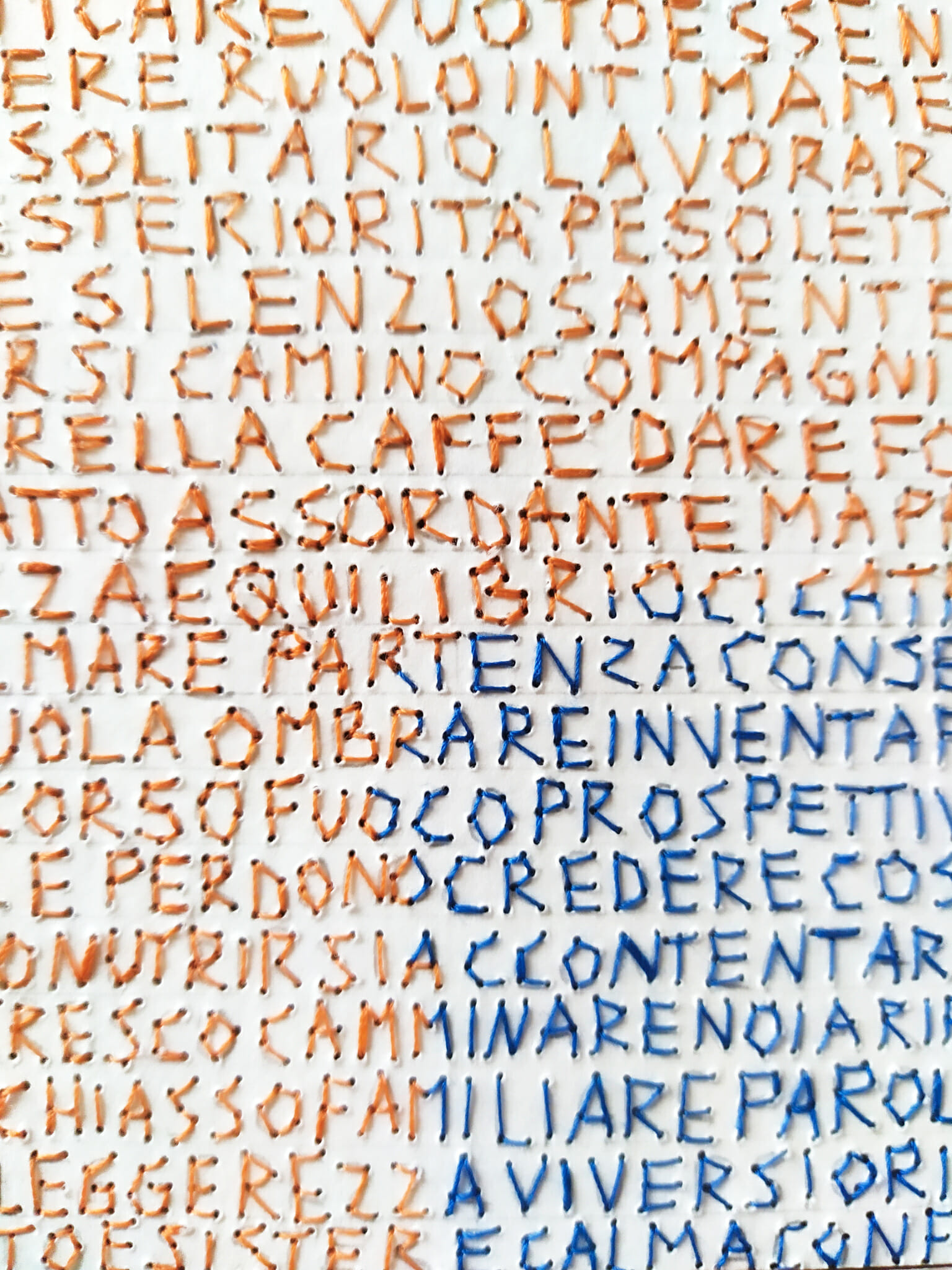 Among the artists selected by the two curators Baingio Cuccu and Anna Rita Punzo for the Biennale of Fiber Art of Sardinia running until November 14 at the MURATS Museo dell’Arte Tessile Sarda,there is Andrea Cocca, aka Cenzo, a young Sardinian artist (born in 1994) originally from Ghilarza, in the province of Oristano, who moved to Olmedo, in the north of Sardinia where he now lives and works.

After graduating as a Stylist at the Fashion & Image Institute and with a scholarship from the G.A. Sulas,  he concludes his training with a one-year artistic residency in Nuoro and a master’s degree. The final project will be presented in Sassari with the exhibition “As soon as you wake up, but also later”

In fact, during his fashion studies he became more and more interested in art and began to experiment, as a self-taught artist, textiles as an expressive language for creating works of art. From these first attempts to combine one and the other, the first hand-sewn works and a series of portraits were born. Let’s retrace this path starting from the work exhibited in Samugheo.

A large ancient canvas wound and stitched up with blue thread: this is A LONG AND DELICATE MEMORY NOT TO FORGET, the work you created for INVENTARIO 20, the Sardinia Biennial of Fiber Art in progress at MURATS. Can you tell me about this job?

Sure, it’s a great suture / seam that I made especially for the Fiber Art Biennale.

It is a white canvas from the 1940s that was given to me by a woman from Monteleone Roccadoria. With a blade, I made a vertical cut in the center of the cloth creating a large gap, a large wound. Once the cloth was cut, I stitched it up with blue and light blue threads. I tried to represent a moment of reconstruction, of reunion. In life we ​​happen to go through dark moments or live experiences that mark our path, time teaches us that everything passes and everything serves to build our future, we just have to mend the right parts and therefore not leave the wounds open. Everything can be rebuilt.

Blue, gold, browns: your color palette has the shades of your land. How much and how does the place as a whole – geographic, historical, cultural – influence your work?

Surely silence is a fundamental element that characterizes the land in which I live, and I go in constant search of silence, wherever I am, I feed on it and try to transform it into traces, into signs. My colors are blue and light blue which are often accompanied by yellow, gold and all shades of brown. They are the colors that accompany me every day, they are the colors that this land has always offered me and I try to return my gaze through the works.

Well … yes…. I didn’t always get along with the rigidity and the rules of tailoring. I started sewing in my own way over the sheets of paper and over the scraps of fabric but without following any method, I did it when I came home after sewing lessons. So I have never abandoned needle and thread, I just try to use them in my own way.

Antique canvas, paper, shirts: you sew (on) different materials. What is the criterion with which you choose them and do they also have a “conceptual value” as well as a technical one for you?

Yes, they have a conceptual value and I choose them based on what I want to tell and convey. Lately I have been using the old sheets that our grandmothers used, broken and torn sheets, marked by time and steeped in memory and breaths. I like to intervene on the sheets to create a dialogue between past and present, between the visible and the invisible, between myself and the support that becomes almost like a person who absorbs my feelings and thoughts. I believe that old cloths always have something to tell. In the past I have also used shirts to tell the life of Professor G.A. Sulas, I have sewn the faces of all the people who have revolved around his figure. Shirts themselves have become people. I use paper very often trying to take advantage of its lightness and delicacy.

Due to the pandemic, the home and living in it  have forcefully returned to the center of our lives. This theme is also inspired by one of the projects divided into different parts and on which you have been working since 2019 …

I started working on the theme of living in January 2019, maybe I chose the best time to start this project … unfortunately or fortunately. In 2020 I got to experience living at home 24 hours a day and to analyze the issue more closely, given the restrictions related to the pandemic. I started by tracing and sewing the floor plans of the house on paper, then I went to dig into the past trying to reconstruct the links between myself, spaces and objects that have been created inside the house.The second part is linked to the images and situations sewn, what remains imprinted in our minds and in our eyes, an internal gaze of the present. The third part is linked to the senses of living, it is a series of sewn cubes, while the fourth will be an intertwining of photography and sewing, yet to be developed.

Recent projects include THE SOFT WALL – TELOS, a site specific installation. What is the genesis of this work and what is your relationship with the space for works like this?

So, the initial idea is by Stefano Resmini, curator of the installation. At the beginning of March, he called me to create a soft wall in the new space dedicated to Contemporary Art in Sa Mandra. Once we saw the room, a kitchen, we thought of creating a soft room, no longer just a wall. This was possible above all thanks to the sheets that the family that owns the space made available to us.

THE SOFT WALL – TELOS wants to represent a soft and welcoming embrace, it wants to tell a story of identity and belonging, it wants to be a room in which one must and can reflect. Time can stop, even for a short time. The relationship I have with spaces for works like this is quite intense, like the one that is created with the support. I like to live and at the same time respect the space, knowing the place is a necessary “point” to create a site specific installation.

Front and back, front side and back side: many of your works need to be seen from both sides …

Yes, they usually have a first and a second part, a front and a back. The first part is the drawing, it is the first trace that I leave on the sheet with a pencil or a pen. To get to the second part I have to pierce the first and go beyond the support. The second part is almost always the most important, the part to discover and explore, the unknown part to know. I try to go further.

What’s on the horizon?

I will certainly have to devote myself to the last part of the “Living” project. After that, I have recovered many textiles and will continue to work with sutures, not only with fabric but also with paper. Since the beginning of the year I have also been working on the covers of the new book by Mario Saragato, with whom I am also collaborating to grow the Ghirigoro Museum, born this year in Aggius from an idea of ​​his.