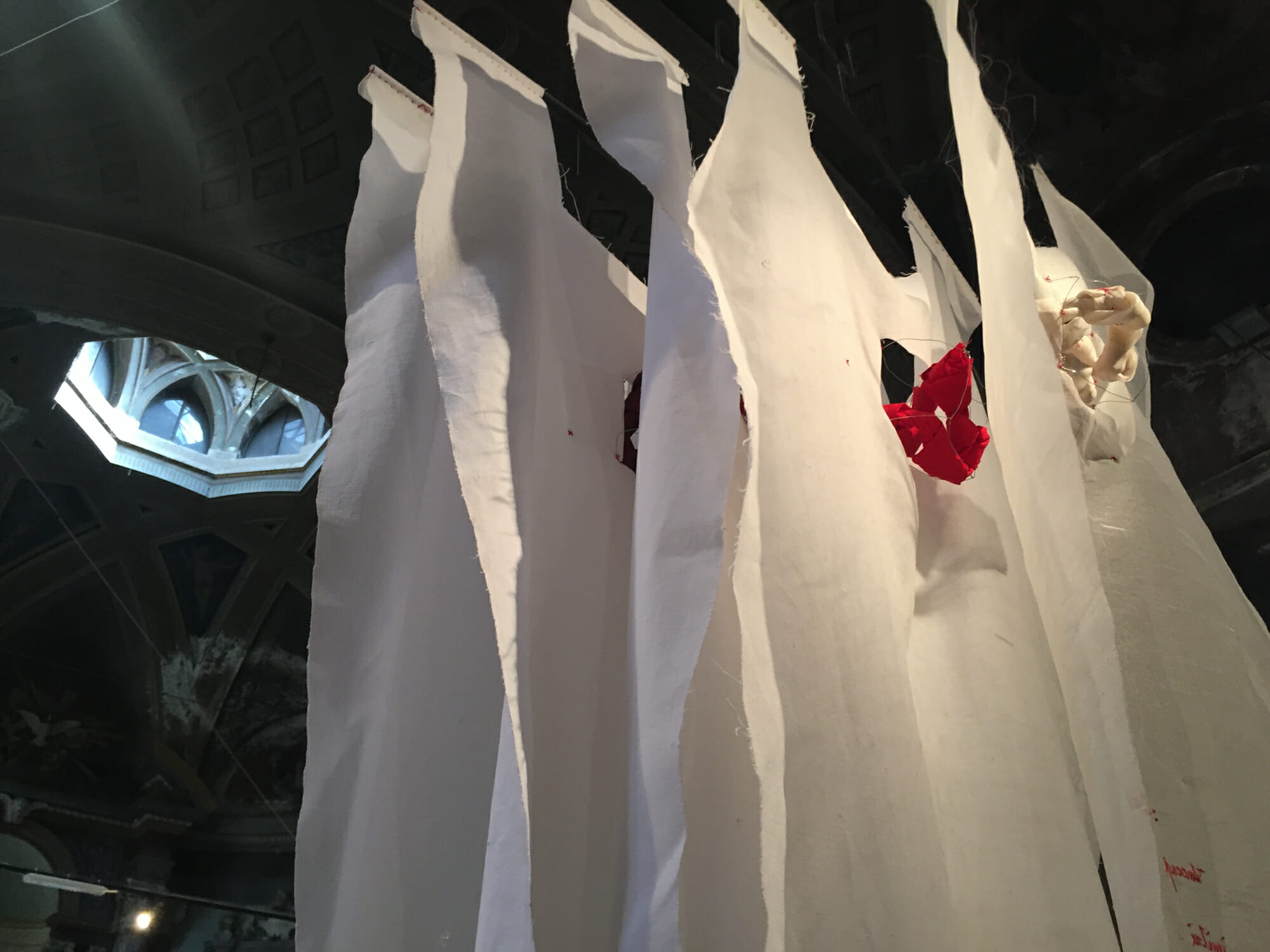 Daniela Evangelisti was born in Aosta and now lives and works in Verres, a small village in Val d’Ayas.
With a degree in Education, she has always had a passion for textiles, in particular for hand-woven raw hemp canvases, lace, antique lace and house linens made of linen. At first they were items to collect, after they became precious tools to create, basic material that would give form to deeper concepts. Whether at an early stage of her artistic experimentation she uses fabrics as proper canvases in which she “writes” with ancient embroidery, cotton threads and lace, at a later stage she breaks the limits of two-dimensionality to create installations and sculptures that take up more space. Her works have been exhibited in Parma for Trame a Corte, at Palazzo Opesso in Chieri, at the Fuori Salone in Milan and in private galleries and public spaces.

Daniela Evangelisti | MEMORY PLOTS | 2020 | cm 29x10x18
The slender structure is the defense of something ancient that has been and that doesn’t want to let go. Almost a witness to pass on to those who will come next. It is a memory that keeps within itself the voices of those who have been offended, torn, killed … and entrusts the poignant memories of which those voices speak (those fragments of silk lace) to the passing man.
Photo by Evançon Paola Rosetta

In your artwork you use fabrics, lace, antique embroidery and… metal threads. How did you arrive to choose such different materials, the first delicate and artisanal, the second robust and industrial?

My works, all based on some moments of the past, were born to give value, visibility, consideration to the work of women. I was a collector attracted to hemp fabrics, lace, ancient embroidery that I found, almost abandoned, on the stalls of the antique markets. These snippets of life attracted me and the purchase represented a necessity, a call from which I could not escape. In a second moment I felt the urge to give a different value to those works by updating them and trying to focus attention on the beauty of small precious pieces.
The use of metal threads contrasts with the lightness of some fabrics. On the one hand, this choice conveys the explicit and underlying feminine strength that, like a fil-rouge, has always accompanied – and will probably continue to accompany – the work of women.
On the other hand, the use of various metals such as steel, copper, iron enhances the value of our inheritance. I think that steel, today, represents a current but lasting material, almost perennial, able to transport elements of the past and lead them towards a future time.

What is the role of the ‘word’ , the other ‘material’ of which your works are made?

The word is a fundamental part of my art. Very often the title of the work itself comes first and, even when the opposite happens, I spend a lot of time studying the words. Research in literature is an inexhaustible source for my works that I always refer to when an idea, a concept, comes to me.

Readings about certain themes guide and /or inspire me, together with that infinite heritage of ‘knowledge’ from the past which are unknowingly handed down to us and from which I think I am constantly drawing.
Sometimes I feel the need to write a few words on the work itself to reinforce concepts, to emphasize details, to make explicit the underlying meanings.
No, I could not conceive my works without words.

Many of your works deal gracefully with different aspects of the female condition, universal and in particular. What messages do they convey?

Holding in my hands the works made by many women , I sensed the emotions, the moods of their life. It was therefore inevitable to reflect on the female condition, as it has developed over time. In a second phase, I felt the need, at first unconscious and then increasingly wanted and urgent, to represent personal and collective situations common to all women.

If my works convey messages, these concern the – ever increasing – attention that must be paid to the choices and ways of life of women. In fact, they have always been conditioned by a sort of dichotomy between the free aspiration of personal fulfillment and the obligation imposed by the responsibilities and workloads linked to family management but also fought, between the need to express one’s more intimate aspirations and the responsibility to children and family life.
It is precisely this ‘life in the balance’ between two poles of attraction that makes their lives uniform and which, in certain cases, can enrich them, if they are made aware of it.

Daniela Evangelisti | SENSE OF DUTY | 2019 | 25x40x48 cm
Strong women, even if they are scared, find the courage to carry their burden on their shoulders, strength in fragility and a shadow of a smile kept for the good days.
Photo by Evançon Paola Rosetta

Daniela Evangelisti | DOMESTIC BARRIERS | 2017 | 2 hemp panels for bed sheets, small plexiglass tubes, lace fragments | 55×250 cm
The railings that imprison and hold back desires and ambitions are not just iron bars, they are often gentle, elegant and delicate in appearance. They are transparent like water, but hard like ice. They are as heavy as the sense of duty; they leave no breath and crystallize, forever, the desire for infinity.
Photo by Evançon Paola Rosetta

Do you think that art has a cathartic and / or therapeutic power, for the artist but also for the observer / user?

Yes, I believe that art certainly has a cathartic and, in many cases, even therapeutic power. In fact, the focus of a specific situation allows for research, an in-depth analysis, a ‘taking charge’ of the problem that somehow is eviscerated through the creative gesture and becomes a lucid and conscious thought.

Even who is observing the work if he is attracted to it and if he can feel it he can become a conscious user both when he shares it and therefore believes that it represents him, and when he does not feel understood and is then pushed to disagree with it.

Daniela Evangelisti | DREAM CLOTH | 2016 | 20×20 cm
Evanescent, light, wisely constructed, transparent, white. Thus are the dreams that depart from the convolutions of the right lobe of the brain. Each dream is rooted in the personality of every one, is woven of images, emotions, desires that hover in the dream space
Photo by Evançon Paola Rosetta

Daniela Evangelisti | DREAM CLOTH | 2016 | 20×20 cm – Detail
Evanescent, light, wisely constructed, transparent, white. Thus are the dreams that depart from the convolutions of the right lobe of the brain. Each dream is rooted in the personality of every one, is woven of images, emotions, desires that hover in the dream space
Photo by Evançon Paola Rosetta

The net is an element that often appears in your works. What does it mean?

The net is an element that can be molded, a support, but it is also aerial, open. It gives the possibility to create almost transparent objects. It gives value to what it contains, but it can make it evanescent. Sometimes I have emphasized the weave of the net with linen or cotton threads that highlight colored geometries, other times it is the net itself that becomes the protagonist.

Daniela Evangelisti | TRUNK | 2019 | 180×10 cm
The trunk of this tree is made up of three severed trunk parts, cut neatly, which however constitute a single life story.
Photo by Evançon Paola Rosetta

Who are the ‘Presences’ of the permanent exhibition at the house / fort’ L CASTEL in Pont Saint Martin?

Swirling presences intertwine in the inexorable flow of time”, these are the words that accompany the exhibition, ‘presences’ meaning the essence of the people who have lived moments of their life in those clothes.The presence is symbolic and at the same time current because it makes us consider our role in history and in time. All of us single individuals with our work, our aspirations, attitudes and talents contribute to creating that vital energy essential for the progress of history. In some ways, ‘Attendance’ is a tribute to the men and women of all time.

“(…) it contains dreams, wishes for a happy life and words hidden inside the seams of a dress. A prophecy hidden in the folds of a garment. A heart of threads and embroidery in a rigid bodice from which you can hardly breathe “: ‘The scrapolario’ is one of your works that I find most poignant. Can you tell me about your dialogue with the magical, prophetic, immaterial dimension of the female universe?

The story of the “scrapolario”, as described in Cristina Caboni’s book, “The weaver’s room”, intrigued me because it is part of that magical heritage of the female universe. Once again the inheritance of knowledge, of the bonds between women, of rituals, of female traditions struck me, pushing me to represent it.

I like to think of a thread that unites the lives of those who have woven, embroidered, sewn and that reaches up to me, and I in turn take on the task of transmitting and passing on emotions and dreams. The ultimate goal is not to create a beautiful artifact, but to get to represent the essence of an emotion.

Daniela Evangelisti | SCRAPOLARIO | 2019 | 39x12x42 cm
“Lo Scrapolario” contains dreams, wishes for a happy life and words hidden inside the seams of a dress. A prophecy hidden in the folds of a garment. A heart of threads and embroidery in a rigid bodice from which one can hardly breathe.
Photo by Evançon Paola Rosetta

You choose neutral colors for your works. Is it a technical choice dictated by the materials or does it have a different meaning?

I like strong colors, but not in my artwork. Neutral colors seem to me more suited to the fabrics and fragments I use and which have belonged to others. It is a kind of discretion in wanting to get closer to past existences. Furthermore, this choice is innate, because even when I decide to increase the intensity of the colors, while I work I create more calm tones.

Daniela Evangelisti | ALI | 2017 | cm 70×64, plexiglass 20×15
Those wings so fragile are safe. White embroidery survives the decades, from one century to the next under the protection of an unknown but omnipresent force. The branches, found during a walk in the woods, are like wings descended from the sky carrying a message of hope and comfort.
Photo by Evançon Paola Rosetta

Is there- if any – a work you are particularly attached to or in which you recognize yourself most?

The work is entitled “Unexpressed wishes” and marked a change in my research path. It was born by chance, as a light elegant dress, through which, from the inside, tenacious steel wires push unspoken desires outwards, represented by pieces of fabric and ancient organza. This flowering is unconscious, but present in the depths and, at times, it expresses itself despite the rationality and common sense that govern us.

Projects in progress or dreams in the drawer?

Recently, thanks also to chance – which is of considerable importance in my life – I had a special encounter. From that a project was born and it’s still in progress. I met an assistant biographer who became a good friend and with whom we hypothesized an innovative experience.

It is about creating an exhibition combined with a phase of autobiographical writing. Each visitor is expected to write freely and spontaneously on the background of the titles and the works themselves, guided by selected literary snippets, especially poems. These texts will accompany the path of the exhibition and must offer an opportunity for memories, reflections on times, figures, moments of one’s life.