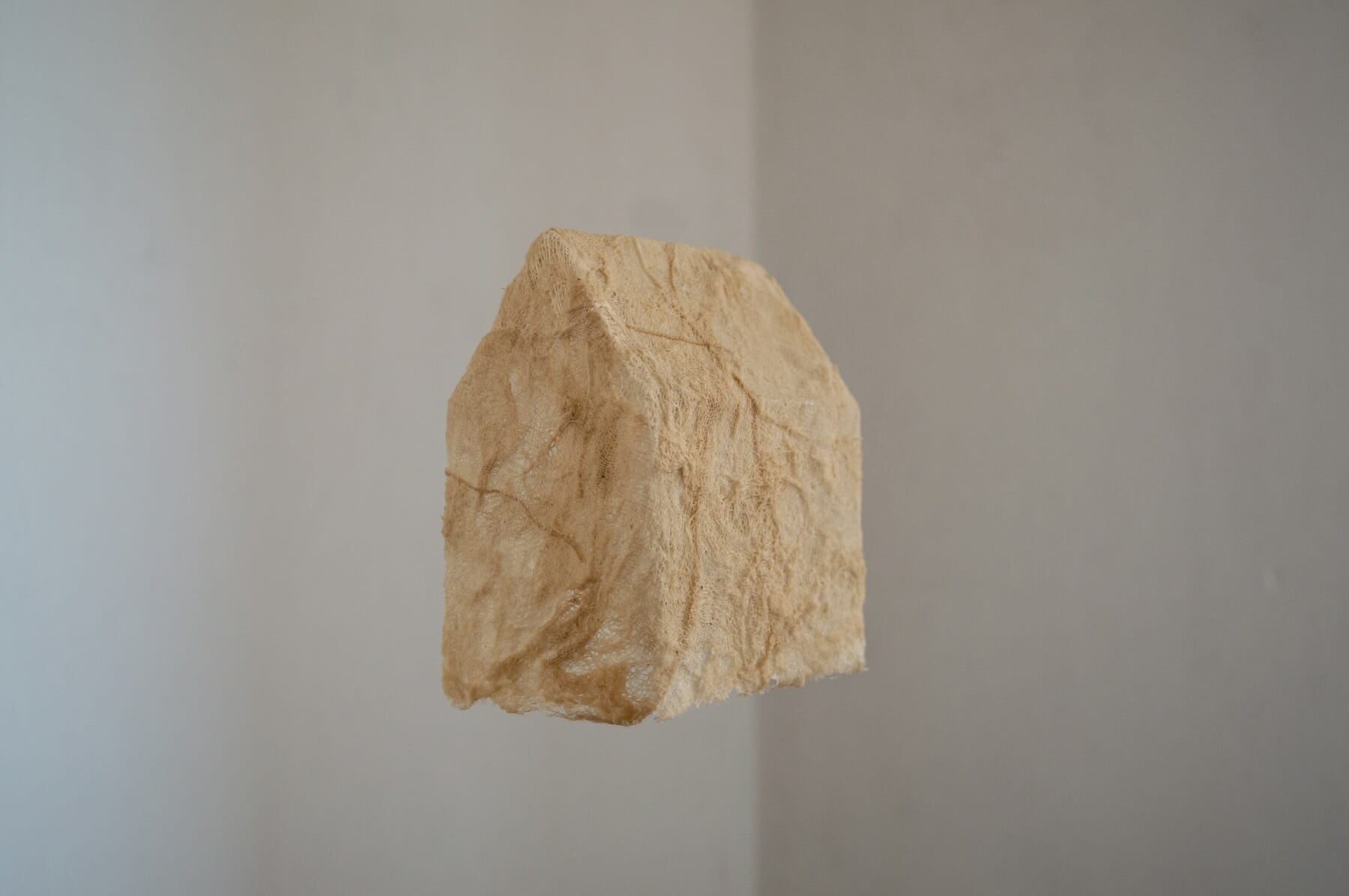 Davide Viggiano was born in Potenza in 1994. After attending the State Institute of Art, graduating in Textile design, he graduated in Decoration at the Academy of Fine Arts in Foggia. In 2017 he moved to Milan, where he continued his exploration in the artistic field by attending the Brera Academy of Fine Arts. His research explores the boundaries of the skin, the boundary between self and the other, container of nomadic identities. His works have been selected in national and international contests and exhibitions. He lives and works in Rome.

Evoked, dissected, sketched, the body is present in almost all your works. Your artistic research moves from and around the body …

Since my very first artistic studies I have always paid a lot of attention to the subject and to the stimuli I receive from it. Matter is vital, it emanates tactile sensations just like the epidermis, a means by which the body approaches the surrounding world from the earliest years of life together with the other four senses. The skin covers the entire body surface, a psycho-physical barrier that connects our inner self with reality.This body-world relationship process aroused a strong interest in me and from here I started  my research. Understanding what it means to “inhabit a body”, thinking of the latter not only as a mere anatomical object but as something deeper and more symbolic, a body of relationships, which extends and hybridises with new technologies. A body of exchange and ritual.

Fibers and fabrics allow us to give shape to the dress intended as a form of living ourselves, a second skin, identity. What is the relationship between the materials you experiment and the content of your works?

The materials I use in my production are mostly organic in nature, materials defined as “poor” which have a reference to something “corporal”, linked in a certain way to physical carnality and alluding to anthropomorphic figures. Objects such as clothing, sheets, gauze, yarns, elements of vegetable origin or why not metal hangers, which have had physical contact with the body and are therefore impregnated with life.  Therefore matter in my experimentation and research tends towards life, hybridizes with all vital forms, becomes a living-body full of stories, past narratives, sensations.The latter simulates the “skin” becoming a single organic membrane dense with memories, “archives” but, at the same time, communicates a message to the viewer. The main purpose of my work is to keep alive this symbolic relationship between the work of art (therefore the material) and its user, just like a thread that holds two strips of fabric together.

Corpi (in) Visibili is your project, divided into several works, which investigates the relationship between the body and contemporary society. Can you tell us?

Corpi (in) Visibili is a series of three works linked together and developed between 2019 and 2020. In this project I wanted to highlight one of the themes most dear to me, namely the question of identity. Personal identity has always been fully experienced and expressed through the body in archaic societies. Over the centuries with the advent of hierarchical structures and with the formation of the powers of the bourgeoisie, the Catholic church and current Capitalism, the body becomes a matter of exploitation for labor and beyond, split, fragmented, mutilated and silenced. In this context and along the process of domination over others, identities are homologated and put in series as factory objects.

All these forms of invisible violence have been put in place to exploit and annihilate the different. Women, gypsies, homosexuals, foreigners, beggars and so on. Here, my work tries to give a voice to all these minorities – political, gender, sexual orientation – with the aim of claiming every form of freedom and undermining the dictates imposed by the phallus-capital society.To free the body from its alienation and fully live its unique and inimitable identity, it will be necessary to stop this long and incessant “witch hunt”, and perhaps the task of us artists is to remove the veils, or rather to urge the public to  look with different eyes. With Corpi (in) Visibili I tried to attract the attention of the user by bringing him to reflect on these issues, starting with the ambiguous name given to the project itself.

What is art for you, what role does it play in your life? And is there any analogy between your vision of art and life and textile techniques – spinning, weaving, embroidery …?

Art is certainly a medium to express myself, but not only. I think it is primarily research and self-reconstruction. A continuous investigation to understand one’s life design, a sort of plot or weave with which we create stories, relationships, bonds with past, present and future experiences. Art allows us to leave a trace of our existence. It is a meticulous exercise and perhaps this is why when we talk about art we immediately think of artifacts, of something material because it is, in some way, giving shape to an emotion, giving a voice to “everyone”. To weave, therefore, the tapestry of one’s own existence: a metaphor of the intertwining with which my production is connected. The bond I feel towards the weaving techniques used in my work, albeit in an experimental way – such as the use of the 3D pen to weave elements obtained from plant-derived bioplastic (PLA) filaments – is certainly derived from my first experience and artistic training: I graduated in Applied Arts as a textile designer at the Art Institute of Potenza. However, in my artistic maturation, it is in the “traditional” textile techniques that I found the most suitable means to give shape to my thought and my research.

Liquid bonds, hyperconnection, alienation are among the contemporary instances that have inspired some of your works. What reflections would you like them to encourage in the viewer?

My attempt is to bring to light issues that affect the life of every human being, to understand the changes in society and, with it, in life itself. The intertwining of relationships, the connection not only with the other body but with all living beings that inhabit the Earth, being part of this great canvas of which each of us is an important, unique, and therefore a different piece, are some of the reflections that I would like to evoke in the user. The term “living” in fact takes on various meanings, it relates man with his body, with his clothes, with his home, with his habitat and with his habits and therefore with the life experience of every single individual. Connect with each other to create new scenarios and new points of view.

Is there a work to which you are particularly attached, from which you would not be separated or which represents you more deeply?

In the past I have always been very jealous of my work, I would never have parted with it. I always treated them as if they were my children, that’s what I called them. Growing up and trying to make my way in the world of art, I learned to “untie” myself from them. Each work has a link with a particular moment of my life, with a place or affinities with people who in some way have left an important trace. One of the works that currently represents me the most is certainly “Abitare 02”; maybe in a year or two I’ll change my mind.

Who are the artists who have influenced you or with whom you feel an affinity?

“Look for your fellow men!” a dear teacher from the Brera Academy repeatedly told us when I was still a student.  Speaking of artistic affinities, let’s say that I am very attached mostly to female artists; I can mention some very famous names, such as Maria Lai, Carol Rama, Louise Bourgeois, Chiharu Shiota, Mona Hatoum, Orlan and Berlinde De Bruyckere; but there are many others (perhaps little known and more emerging) with whom I identify both in terms of aesthetics and ideology. In a more universal vision, not only visual artists have influenced my work: some come from other creative sectors, such as writing (Paul Preciado, Parinetto, Foucault, Donna Haraway, Rosi Braidotti for example) and above all fashion. From a semantic point of view, fashion extends to all social fields, enters bodies and everyday life through clothing, music, photography, architecture, advertising graphics, cinema, the theater and so on. To mention here some names that I respect very much: Iris Van Herpen and the Italian Alessandro Michele, Art Director of the Gucci Maison.

How has the pandemic and the resulting restrictions affected your work? What have you worked on in the last year and what projects do you have in the pipeline?

The pandemic has certainly influenced my work, indeed I must say that it has given me the opportunity to fuel and develop many reflections that have been at the center of my studies in recent years. Perhaps 2020 was the year in which I managed to produce many works with an extra awareness of what I try to express through my art. I am sure that all these changes on a global level will lead to the birth of new ideas, especially on a cultural and social level and this will affect all fields. Creativity and a different point of view will be fundamental to help us improve life in all its forms. In this period I am experimenting and working on several projects for some exhibitions scheduled for 2021.