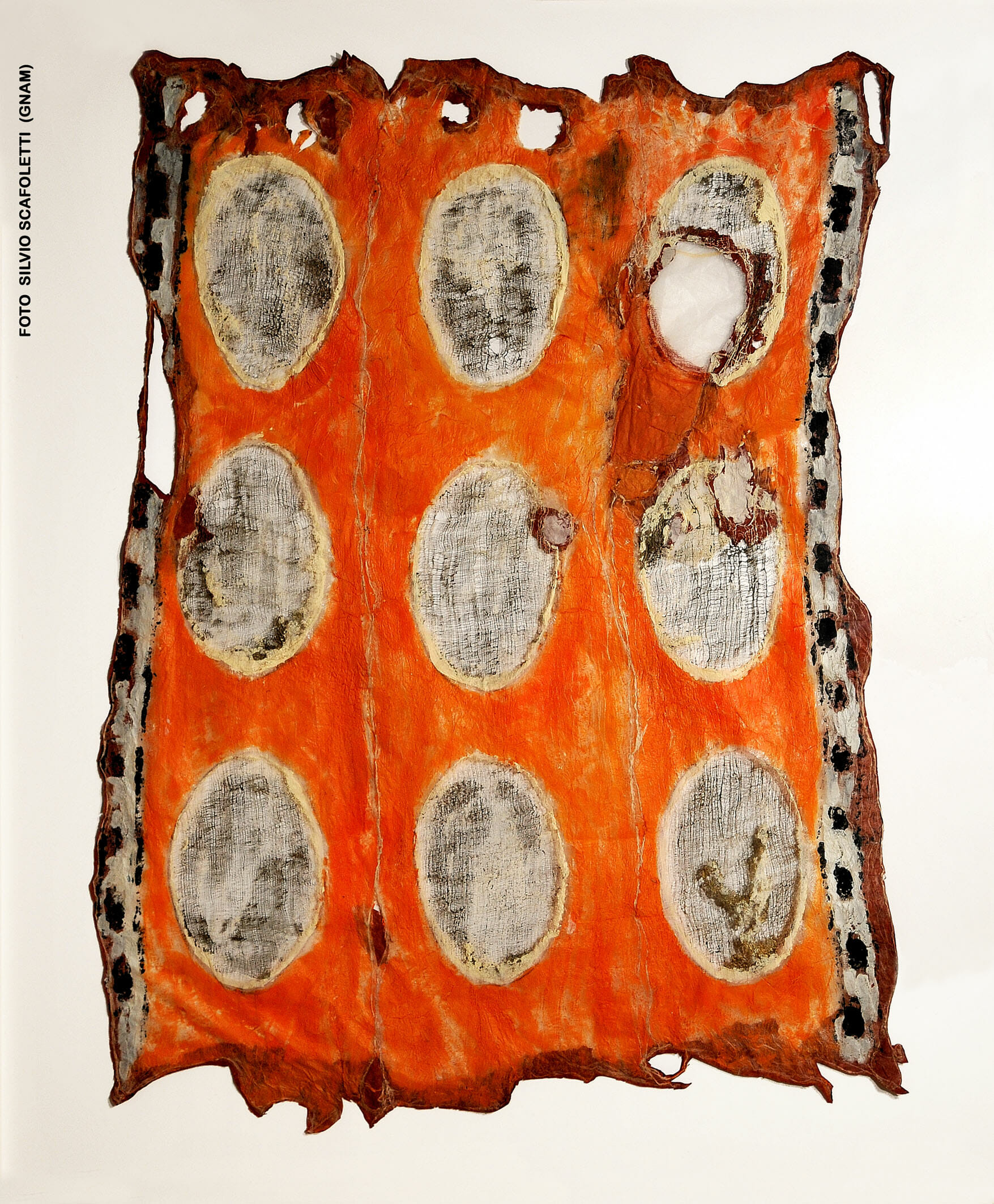 A special thanks to Jackie Kibble for the translation

Isabella Ducrot was born in Naples and has lived in Rome for many years. Throughout hernumerous travels over the years, from Russia to the Far East , she has collecteda remarkable selection of antique and precious fabrics, which have since become object of study and research. From this passion has developed an original artistic path in which these fabrics have become the role, subjectand object of herwork.

Isabella Ducrot’s works have been exhibited, amongst others, at the National Gallery

of Modern Art in Rome, the Archaeological Museum in Naplesand the Venice Biennale.

Repetition” is the subject and leading theme in many of your artworks. I refer to this,thinking of the round form, very often present in your work. Can you talk about it?

Is repetition representative of something to you or is it an act that is enough initself?

Many years ago in an Istanbul Museum I was very impressed by the beauty of an antiquecarpet, it had a whitish background covered with red circular shapes placed  at regular intervals. I was amazed at the sense of pleasure such an unusuallysimple decorative motif gave me; the design was really a musical motif, a pleasant lullaby, an effective prayer. But, I asked myself, would that red ball motif have kept its aesthetic justification in our country as the “main theme” of a painting before the Contemporary inthe last century had opened the gates of abstraction? It became clear to me on that occasion how much our tradition has had in the past great prejudices about the value of “decorative”, qualifying it as Applied Art, would be to say the least. In short, “decorative” narrates nothing. That day “decorative” became an important part of my research.

The activity of study and research related to the traditions of the fabric in the various Eastern cultures has long been the subject of your interests and studies. How did all this affect your work?

I believe that in the West the weight of historical thought changes our aesthetic judgement, our figurative art paints stories, but in the East art is celebrated at a slower pace, I would say, resulting in the contemplative character of its artistic expressions.

Isabella you are an expert connoisseur and collector of ancient fabrics rich in history and charm. When and why did you start collecting fabrics?

I travelled a lot in the East, in the markets I could buy different fabrics from those I saw in Italy, after a while I realized I had a kind of collection. Collecting means living with the collected object, in the case of fabrics touching them enabled better understanding and study of the techniques, weaving differences, etc..

What captures your attention and fascinates you most in the cloths? Its apparentlysimple structure made of weft and warp, the yarns used to produce it, its history and its past or the gesture of the weaver who made it…

At a certain point I realized that I preferred fabrics that were apparently simple, but in reality were the result of very sophisticated craftsmanship, where woolen andcottonfibers became as bright and shiny as those of silk, so that, at times,it was very difficulttounderstand which of these fabrics I was handling, whether cotton,wool or a silk..

Can you tell us how your work “Turban” was born, which you presented at the Galleriske in Delhi in 2014?

The work “Turban” is composed of a real turban; the exposition of its 18 meterslength along a wall makes it similar to a large white sheet waiting to be marked by something, altering its true nature, that of being involute, hidden and unexplained. But in this way we can grasp the ineffable, almost weightless consistency of its very fine structure and its destiny to resolve into a whirlwind of gestures to wrap it like a cloud around the head of a human being.

“Variations” is the title of your solo exhibition at the National Gallery of Modern Artin Rome in 2008. A series of portraits of authors (composers) that you made in oils and pastel on canvas paper, paper collage, plastic and Turkish embroidered fabrics have been exhibited. Can you tell us about these works and the fabrics in each portrait?

In an Anatolian market I happened ona set of embroidered handkerchiefs displayed   by the peasants at parties as part of their dowries. The embroidery on these cloths, used as vestments, seemed very interesting to me, free from the traditional decorative canons, they even had Picasso’s daring. At that time I was reading a book, “La danza di Natascia” by Orlando Figes, which relates the questions that Russian artists asked themselves at the beginning of the twentieth century, who are we? are we Mongolians or Europeans? Visiting further scattered villages far from their cities and listening to their songs helped learn about their musical instruments drawing inspiration for new compositions. So they gained access to concert halls, theatres and salons in the West the avant-garde music and little by little found the consent of the public. The paintings you are talking about represent my attempt to pay homage to these famous musical geniuses by portraying their faces; at the same time to show the extraordinary work performed by women whose names we willnever know and to highlight their destiny of anonymity.

“Bende Sacre” was your exhibition that took place in the Gallery of Modern Art inRome. What is the history of the fabrics you used for this series of works?

Thirty years ago in Lhasa, Tibet, in the sanctuary’s stalls I saw some small blocks stiffened byrice dough. I didn’t know that they were the last examples of votive objects that pilgrimsbought for little money, ritual bands intended to cover the shoulders of sacred statues.Only a few years ago I realized the exceptional value of those elementary canvases: their structure is an almost invisible web, a unique work that remains as evidence of somethingunrepeatable. After much hesitation I used themas textiles preservingas far as possible their sacred nature

Your latest book, “La stoffa a quadri” (The Checked Fabric), starts from a reflectionborn by observing an unusual detail in “L’Annunciazione” (The Annunciation) bySimone Martini: the presence of a checked fabric in a fold of the angel’s cloak.From that point, you startedextensive  research on the meaning and use of thesefabrics through time.

Can you tell us some of the results of your research and your reflections?

I don’t think I’ve exhausted all the thoughts that plaid fabrics inspire in me, I can only say that I would like to continue to meditate on their symbolic strength: household cloths that lend themselves to represent abstract concepts in a tactile way…

HERE you can view a description of the book and its essential contents.

What, in your opinion, is the relationship between art and high craftsmanship?

More than a relationship, I would talk about distinction, or rather separation. Today’s condition of what is defined as Art has freed itself from that kind of relationship with matter that artists and craftsmen once shared. Craftsmanship maintains a privileged relationship with the material they need, whether it be iron, silver or glass, with no otherwish than the discovery ofits mysteries and potential. The craftsman, traditionally, is a meditative person, the gestures to make a slipper or a ceramic vase are always the same. Withoutcreative jolts, he is required to work void of greatambition, little inventiveness, and fewer ideas, and this makes him a human example of the past; the craftsman’s time flows slowly, time to think, remember, desire …