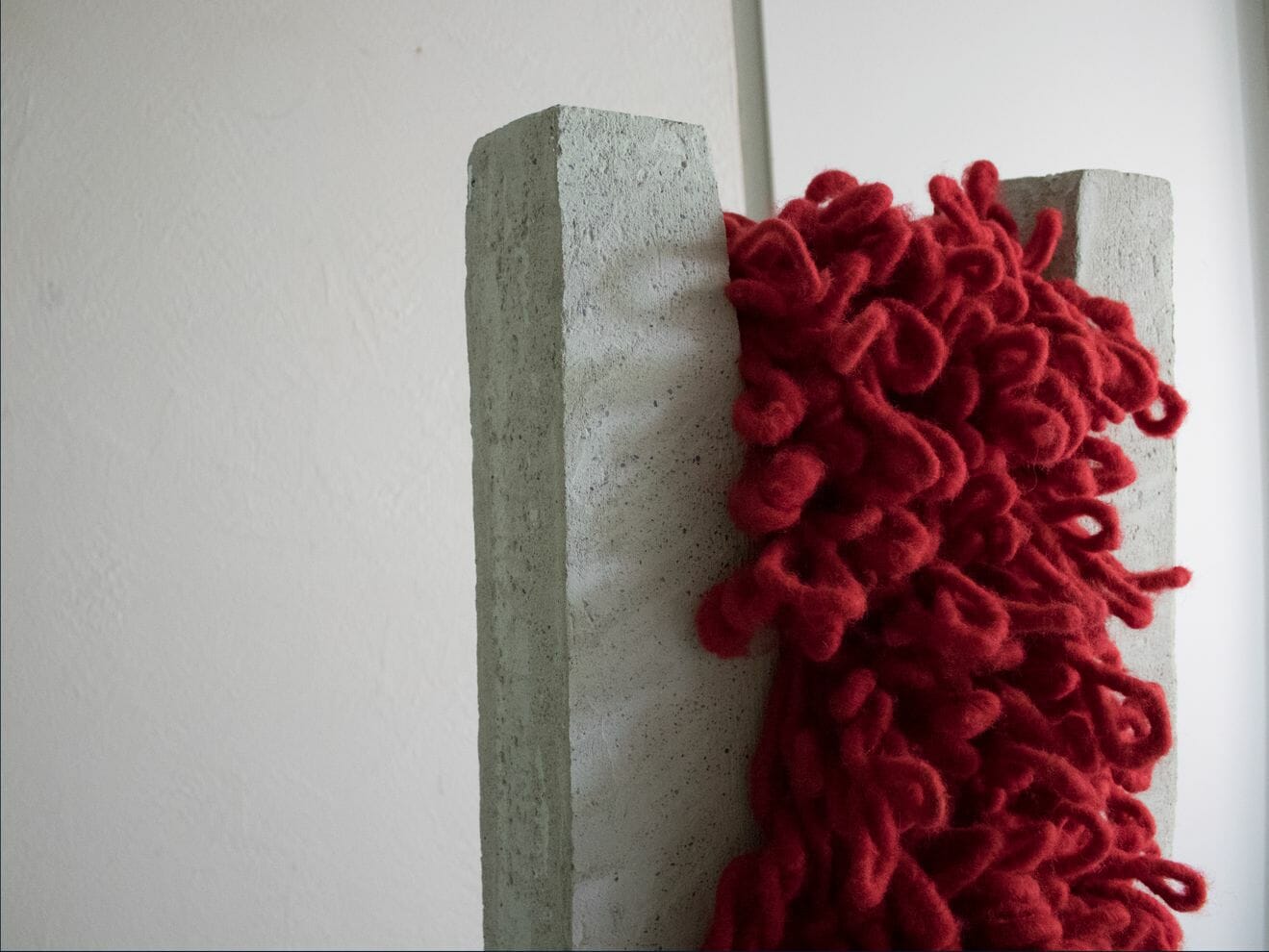 The interview with Lisa Martignoni is part of a cycle that I am carrying out “on the threshold of the Fine Art Academy” that is on young artists and recent graduates and or undergraduates, and to discover the future of fiber art and textile art through vision, research and the work of the new generations.

Lisa Martignoni was born in Switzerland in 1994. Graduated Textile Designer at the CSIA in Lugano (2013) she graduated from the three-year course of Visual Arts (2018) at the Academy of Fine Arts in Bologna, completing the training course with a Master’s degree in Arts Visuals obtained earlier this year at the same Academy. Since 2017, her works have been selected in international contests (Young Fiber Contest Chieri, International Biennial Exhibition of Mini Textile Art Scythia Ukraine) and in group exhibitions in Italy and abroad.

Your research in the textile field ranges from weaving and interlacing techniques to experimenting with different materials – fibers but also plastic, electrical wires, bubble wrap, etc. How and where does this choice originate?

This interest was born some time ago, when in my training course I learned the traditional technique of weaving on an artisanal loom, obtaining a diploma in Textile design at the CSIA Institute in Switzerland.

By studying and assimilating this technique, I became aware of the fact that the textile business is one of the first forms of technology that man has developed; hence my interest in the evocative power linked to the actions of weaving, actions that refer to an ancestral and symbolic dimension.

A gesture that I first internalized and then reworked in new and personal weaving techniques, integrating unusual materials and unusual weaves, which generate a bridge between past and present.

I am particularly attracted by the communicative scope inherent in the materials, in every aspect and shape, often the choice is determined by their memory, as well as by their aesthetic-attractive qualities. So first the research and then the redemption of the material and its communicative range,it constitute a fundamental part of the poetics that distinguishes my works.

Yours is a dialogue with the medium that also becomes inspiration, content or meaning. What is the genesis of your works, how does the idea arise and how does it take shape, how do you choose techniques and materials?

My artistic language is the result of research developed over the years in which I reworked and rethought this medium, for this reason the inspiration and contents are not based on a single formula. Some projects are linked to a more personal and introspective intimate dimension, while others investigate the collective meaning of common living, of making and living art. Often it is the materials that inspire me, but also the personal experiences and situations lived.

Some projects are clear and focused right away, while for others I let myself be inspired by the rhythm of the shuttle, and by the evolution of the weave weft after weft, by the plasticity of the materials and by the wide spectrum of ideas and forms that this medium can acquire. And it is through the same materials that I conceptually relocate my works in the contemporary dimension, for this reason I often choose waste or recycled elements, a choice that is justified in the light of their visual appeal.

Furthermore, experimentation plays a fundamental role, experimenting with new weaves and mixes of materials allows you to discover new forms and interpretative formulas of reality, thus offering the user a new point of view and also a meeting point.

What are the elements that most influenced or influence your work? Or artists and/or movements that you feel particularly close to your research?

I believe that every artist is the interpretative tool of what surrounds him, so what influences and inspires me comes from what I live, what I feel. My production is linked to the possibility of narration given by this ancient technique, which has been transformed over time and space, from an everyday object to an interactive object.

During my training I learned about the different artistic figures who have not only changed the idea and action of this medium, but also marked the history of art and the changes it has undergone such as: Maria lai, Louise Bourgeois, Magdalena Abaknowitz, Alighiero Boetti or artistic movements  and schools such as: The Dadaists, the Futurists, the Bauhaus (…) Artists and movements who have developed researches of a profound psychological-analytical depth and who were the first to investigate the potential of the medium textile.

Clearly it was not only these great names of the past that allowed me to create knowledge and therefore an awareness and relative development of my poetics. This is why I am constantly attracted to the contemporary sphere, which does not necessarily use the textile medium, but which pushes me to discover new forms and dimensions of thought, giving me the opportunity to evolve both on the intellectual and conceptual front and on a technical-practical level.

There is a tactile figure in textiles that makes the medium ‘familiar’ and allows the user to feel a more direct, intimate link with the works. How does the public / user relate to yours? From three-dimensionality to installation, is yours a path that tends towards increasingly interactive, immersive, experiential works?

All my works are nourished and enjoy direct contact with the viewer, who often physically and personally inserts himself into the works, living them and then rethinking them also through his own person.

This encounter and the exchange that derives from it is part of the tactile-visual and therefore experiential dimension. Inherent in this interactivity, between work and audience, there is a strong emotional component that allows you to enjoy the work in its entirety, which is why it is often the same people who inspire me; a research that enters the heart of the contemporary dimension, investigating the collective meaning making me an interpreter of situations and of human heritage.

My works enter the common spaces, of our realities and of our everyday life, through site specific projects where, during the creative process, the space is rethought and modified by me, transcending from the physical space to a conceptual dimension, in which the projects unfold.

In this way, my aesthetic gesture leaves a trace on the individual, the community, the territory, offering a possibility of reinterpreting the themes dealt with and also the artistic object.

The time of the lockdown due to the pandemic is at the origin of some of your works, including # Marzo2020 – balloons and iron – and # Aprile2020 – in wire and concrete – daily diaries told through opposites – fragile / solid or soft / hard. What reflections do they convey?

Following a temporal trend, I wanted to investigate the state of closure that all of us have experienced, especially in the first months of this pandemic. These two works are the materialization of an emotional sample, where concrete parallelepipeds represent the retaining wall.

These structures metaphorically enclose all the limits, blocks, stasis, heaviness, closure and restrictions of the moment: in a rectangular block of gray concrete, as if it were a ballast, as opposed to other elements of important counterweight that instead they suggest lightness, contact, plasticity. The balloons and the felt yarn are locked up, compressed and forced into the perimeter that delimits the iron and concrete cage. Desires are crushed and oppressed by this static and rigid structure, beyond which action is banned. The communicative scope of these two elements, in clear contrast to each other, represent the dichotomy between what we have been forced to live with respect to our will and needs as social animals.

The last project I worked on entitled “Suspended” is the bearer of the collective sentiment experienced in this suspended time. The intent? It was to transform the health emergency into a moment of storytelling that investigates the collective dimension of common sense experienced in the summer months, in which contact with the other, the outside, was found and rediscovered. A project that required time for reflection and research, exchange and also a long and meditative execution. And it is precisely from the contact with others that my work finds fertile ground, through a simple but crucial question: if I had to summarize Your summer with a few words, which would be the most representative? –

I posed the question to a sample of about twenty different people, through a very informal and conversational dialogue, creating a climate of sharing and exchange of opinions, which allowed a flow of emotions and sensations experienced during the summer.

The exhibition space also plays a fundamental role, as the work takes the form of an installation aimed at creating a semantic field, where words become meaning generators through the arrangement, designed to weave a story, each testimony is linked to the next, creating a common thread that binds all the towels together.