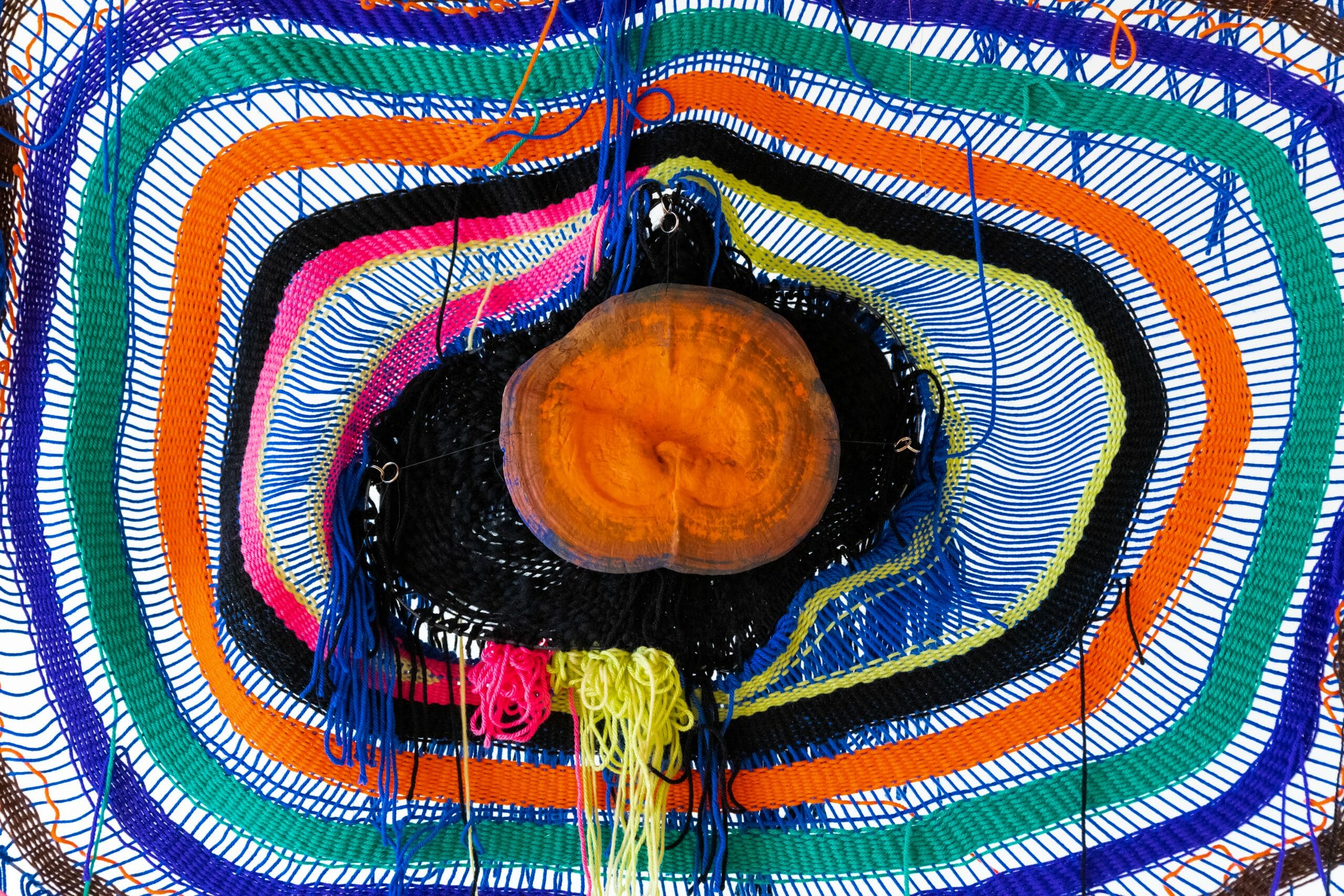 Michelle Segre, a sculptor originally from Tel Aviv, lives and works in New York, where she graduated from the Cooper Union School of Art in 1987. Her works are included in important museum collections such as MOMA, the New Museum in NY, the Tang Teaching Museum in Sarasota Springs and the Colorado University Art Museum, Boulder, Colorado.

Segre’s sculptures combine simple materials such as metal, papier-mâché, plasticine, plaster and perishable materials such as beeswax, bread and mushrooms, with coloured yarns woven and worked upon into bizarre, visionary and mysterious works that hint at the relationship between nature and the cosmos. The artwork is conceived as an instrument capable of conveying and connecting invisible and immanent energies because, as the artist states: “(…) Art has the power to heal, to challenge, to connect one with something transcendent as well as something entirely ordinary”.

How did you approach art and what was the path that contributed to your artistic formation? Where did your interest in textile sculpture come from?

I grew up in New York City, in a household of artists— my father was a painter and my mother was for many years a needlepoint designer, then a textile print designer.  I was interested in art from an early age, particularly painting. I started out as a painter and some years out of art school began to work with collaged materials which eventually made their way to the floor as sculptures. At the time (early 90’s), it seemed like sculpture was still an unexplored frontier in comparison to painting— in particular, I was drawn to its invasive qualities, the way it could take over physical space, not just be quietly contained on a wall.  And materially, the possibilities seemed endless, especially if one was exploring alternatives to high-cost fabrication.  My earliest pieces were made from dirt, clay, moss, cat litter, even potatoes; I experimented with mold that I grew in a bucket using marshmallows as a “starter”…all pretty gnarly stuff. Eventually I began working with beeswax, papier-maché, and plaster.  Around 2009, I started working with more linear elements like wire, thread and yarn, as a way to achieve scale with minimal means.  It excited me to discover that a piece of string stretched between two points could be more expansive than an object with bulk and mass. As a maker of objects that accumulate in the studio over time, filling up every available square foot of storage, this was a bit of an epiphany both practically and conceptually.  The interest in line expressed in materials like yarn and thread also opened up the door to the use of textiles, and I found myself increasingly drawn to the softness of these materials, their ability to fold up into a fraction of their size and their ability to activate and energize negative space.

The use of vibrant and energetic colors is a constant in your work. What is their role and meaning?

Color to me has a quality like electricity.  In the same way that the lines of yarn can be felt like electrical currents in space, so the colors of individual yarns represent different levels of energy, waves that collide and bounce off each other.  The color becomes a thing, a physical entity with a temperature.  Color also has a strong emotional content for me, so I will use color to evoke a specific feeling, like rage (as in Red Sun).

In your textile (or fiber) sculptures there is a constant presence of empty spaces, openings that connect us to the idea of lightness, of something ephemeral and spiritual: do you find yourself in this reading? If not, what is their meaning?

If you can imagine space as a kind of invisible fiber all around us, infinite slices of space that fan out from every direction and standpoint, then an empty space, or “hole” in the sculpture suggests a portal in the fabric of that space. A hole becomes an opening for the viewer to enter the work, to pass through it.  I do feel this is a spiritual kind of experience…a way for the piece to transmit its force to the viewer.

Tell us how the idea for Eight Body Chorus, one of your most recent works came about.

Eight Body Chorus was begun in April 2020 during the worst time of the lockdown in New York, when we could barely leave our homes.  I couldn’t go to my studio so I made an armature out of scrap wood, stretched some yarn across it, and began a small weaving that I could lean against the wall of my tiny apartment.  A few weeks later we left the city for the country, where we stayed for five months, and I began working on a large-scale structure in the studio there that I eventually attached that smaller weaving too.  So the whole center of the piece is the small fragment that was started under lockdown. The piece has strong associations for me that have to do with living in the country for this extended period, being close to nature and observing the daily changes in atmosphere, weather and the night sky.  There was one night in particular where I lay in the field below a completely clear sky and witnessed a spectacular star display that felt almost like a visitation of some kind.  I had the sensation of gazing through a fishbowl into a giant oval expanse, 360 degrees of a pulsating, spiraling eye.  This experience and the whole lead-up from the pandemic confinement in New York is distilled into Eight Body Chorus…the piece is like a message from space arriving during a time of what still feels like a societal and planetary collapse.

Art can be a therapy that brings out hidden emotions, an interpretation of the world, a universal language without barriers, an exploration of the inner life, an instrument of communication and propaganda and much more. What is art for you, what is its power?

Art is all those things to me.  I’m a “believer,” it’s my life.  Art has the power to heal, to challenge, to connect one with something transcendent as well as something entirely ordinary.  But you have to believe in it, otherwise it’s just a pile of useless “stuff.”

Can you tell us a little bit about your current exhibition at the lumber room in Portland, “Transmitters and Receivers“? Why this title? What works are on display?

I’ve had this interest for a long time now in the art object as a kind of transmitter and receiver of energy –  it’s a relationship created between the object and its surroundings, including the viewer, who receives and transmits back.  This body of work, in particular, is about transmitting a palliative, euphoric force.  The works in this exhibition all have allusions to celestial bodies- the sun, the moon, the stars— as well as plants and fungi.  There’s an idea here to create a bridge between facets of the natural world, including the unseen, mysterious realms, in both the micro and macro universe, to facilitate a kind of union with these realms.  Levity and humor are important as well, so there is a play with the irony of the forms themselves being made from the most basic of crafty materials while aspiring to such lofty subject matter.  The piece titled Just why do you think you’re a plant?, for example, is named for a line in a short story by Philip K. Dick, in which the protagonist is receiving psychotherapy for his belief that he has become a plant, and so spends most of his time lying motionless in the sun.  The sculpture is constructed like a collapsed circus tent of assorted, woven and tangled yarns, dried vegetable matter, and a giant beeswax carrot that appears to be sprouting the entire arrangement from its wrinkled end.

How has your work transformed over time? How do the more distant works relate to the more recent ones?

The work has become a lot more complex over time, both formally and materially.  There has been a thread of themes and subject matters that have remained consistent from the earliest days of my working with organic, ephemeral materials like mold and dirt, through the years of making beeswax sculptures of slices of moldy bread, or giant mushrooms and chicken bones…some of these works have been recycled into the pieces of the last twelve years (like the carrot in Just why, which was created originally as a ten-foot long floor piece in 1995).

What projects are you working on at the moment?

I am currently working on some new pieces to be shown in New York this spring at the Derek Eller gallery, as well as the de Cordova Museum in Lincoln, Massachusetts for their Triennial in April.  Recently I made a short video, my first ever, which I hope to show as well.  It’s called “The Owl.”