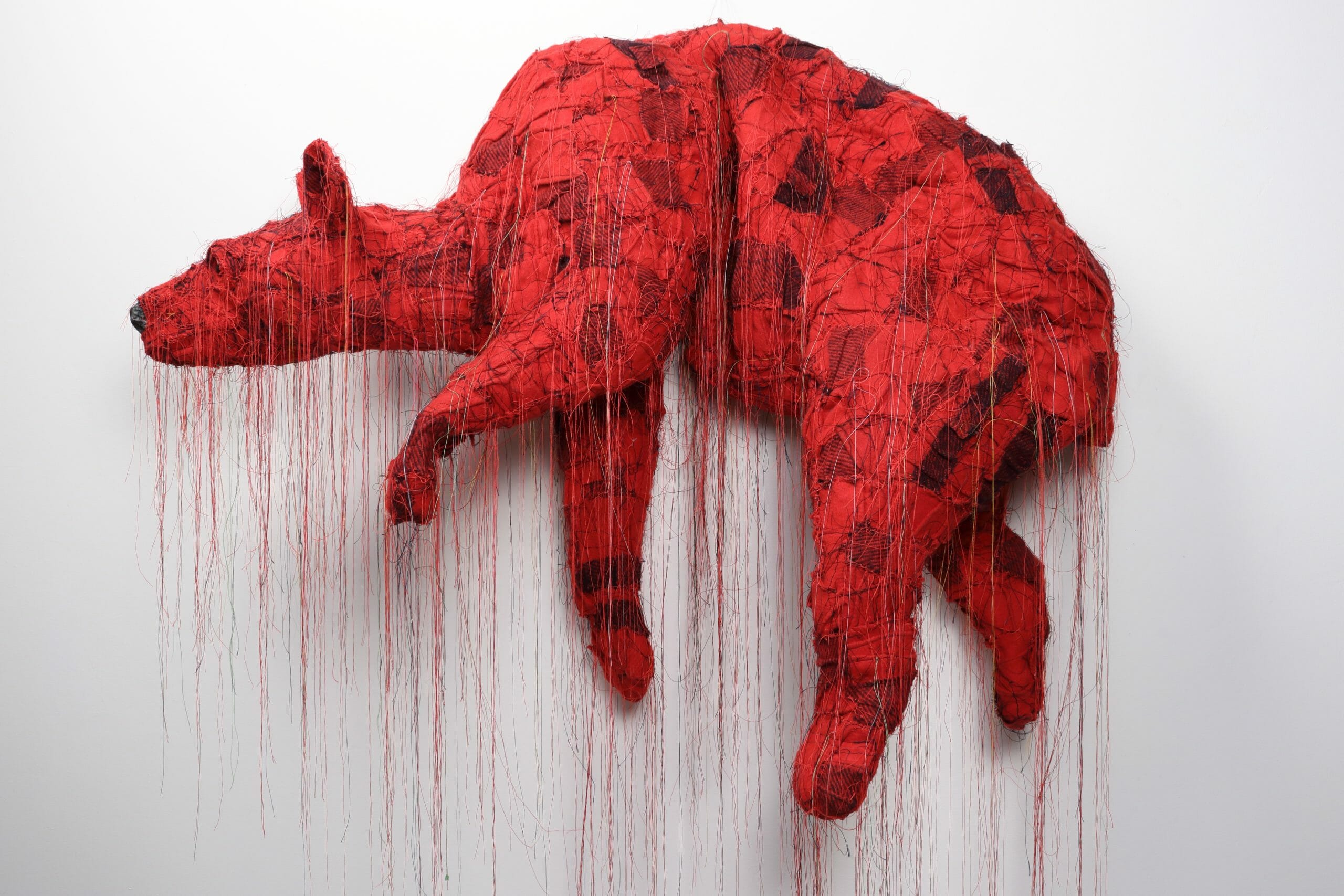 Robb Putnam’s works involve the observer in an ambiguous game of attraction and repulsion from which he can no longer free himself. His works shape the deepest human emotions, investigating lights and shadows, on the mysterious border between hell and heaven.

Originally from Seattle, WA, Putnam received a BFA from the Maryland Institute, College of Art in Baltimore, and an MFA at Mills College in Oakland.  He is a recipient of a Joan Mitchell Foundation Painters and Sculptors Grant. Putnam’s work has been included in several prominent exhibitions including Sew What at the Children’s Museum of the Arts in New York; Travelers: Objects of Dream and Revelation at the Bellevue Arts Museum, WA; Larger than Life: Exploring Scale in Contemporary Art at the Bedford Gallery, The Lesher Center for the Arts in Walnut Creek, CA and Elements of Nature: Selections from the Fredrick R. Weisman Foundation at the Brevard Art Museum in Melbourne, FL, and New Threads: Perspectives in Contemporary Fiber Arts at the Lab and Art Gallery, Loyola Marymount University in Los Angeles.

His work is included in the collections of the Palm Springs Art Museum, Oakland Museum of California, Frederick R. Weisman Collection and 21 C Hotels and Museum as well as many private collections.

Attraction and repulsion, tenderness and fear, light and shadow: your pets give a shape to contradictions and ambivalences. What do these works tell us about? How were they born?

I am very interested in dualities in my work. It is important to me that there is something sincere in them, that they communicate a sense of vulnerability as well as contradictory human emotions. They are almost always partially in shambles, barely seeming to hold themselves together, while still communicating a living presence. I am interested in finding a liminal and ripe space that the suggests that the surfaces of the works are both coming together and unraveling, or even decomposing. By creating works that have a mix of off-putting and seductive qualities, I hope to create an emotional response in which the viewer is drawn into the work only to be repelled and then drawn back in. My hope is that the viewers will find something new in themselves through each re-experiencing of the work.

What is the creative process of your works? How do you proceed from the idea to the final work of art? What are the sources of inspiration from which the idea was born?

My process is intuitive. I spend time sketching out ideas for sculptures, but rarely work directly from sketches. Often, I start with the idea of the kind of thing I want to make, yet the works in-progress almost always become something else as they come together. It’s important to have a dialog with my work during its making and allow the sculpture to tell me what it needs to become. I sometimes start with a mass of material and begin to slowly build around and on top of it until an image starts to emerge. I adjust as I go.

What materials and which techniques do you use for your works? How do you choose the materials?

Sewing is integral to my work. I sew by hand and also use an industrial machine.

Sewing is more than a method of attaching fragments together and building form. For me, sewing is way of imbedding emotion onto the skins of my sculptures, as well as a means of integrating surface texture into my work. I usually leave threads hanging to show the traces of the sculptures’ making and to suggest a kind of unraveling surrounding the pieces.

Much like the scavenger animals that I often depict in my work, I am an avid scavenger of materials. Over the years, I have gleaned materials from free piles, thrift stores and salvage shops. I have also been offered materials from friends and others who are familiar with my work.  It is important that there is a history of touch to most of the materials I use because I think there is a resonance in materials that already come with a history. I have also been known to use my own clothing, blankets, luggage, and other personal belongings in my work. Other materials I have used include backpacks, old boxing gloves, tents, and parachutes. I keep scraps and remnants from past projects in bins and repurpose them in my sculptures as well.

Some of your works of few years ago were very large (for example those exhibited on the occasion of your exhibition at the Walter Maciel Gallery in Los Angeles). The latest works have a much smaller size. Has your relationship with works and the relationship between artist / work / space changed?

I have oscillated back and forth between large and small scale works for the past 12 years or so. When I was making larger scale dog sculptures, I was interested in using scale as way of creating an uneasy relationship with the viewer and sculpture, one that would elicit a mix of contradictory emotions. Recently I have felt a desire to connect with the materials and subject matter in a more intimate way, especially since the start of the pandemic. The isolation of that period made me very reflective. It felt as if the world were becoming smaller, shrinking around me, and I responded by making works that were attempts to find a sense of focus and intimacy in that sense of smallness.

Is there anything autobiographical in your artworks?

My works are autobiographical and, in many cases, can be seen as reflections on childhood experience from the perspective of an adult. I grew up as a somewhat isolated child and was very much involved in my own imaginary world. One animal I have a special relationship with is the rabbit. As a child, I would imagine that I was surrounded by a circle of spirit rabbits. They were my protectors, and I could send them out into the world to defend me against childhood threats such as bullies. I also had an imaginary friend who was a giant pink rabbit named Wombly that has served as a direct source of inspiration for many artworks, especially the Orphan Suit and rabbit pieces. At the age of 16, I was chased by a bear. Since then, I have recurring dreams of bears that present a threat and protect me at the same time. That is how the sculptures of bears were born. Over time the different animals became the starting point of a fluid language, a pantheon of animal characters that could shape-shift and change forms. To me they represent both totems to lived experience and imaginary friends.

What are the most frequent reflections that your works arouse in the public?

Some say they find my work unsettling, probably due to the rawness of the surfaces. The pinks I often use are sometimes interpreted as exposed flesh. Some say that they conjure up childhood fears. Others see the playfulness and whimsy in the works. I’ve encountered viewers who ask for permission to hug some of my larger works. I’ve heard a few adults say that my sculptures would freak children out, but I have observed that many children find them fairly inviting…not off-putting or threatening at all.

The most recent series you are working on is the ORPHAN SUIT series. Can you tell me more about these works? What are they, what do they mean and above all do they have a relationship with the difficult period we have gone through in the last year?

These works suggest the sense of having once been inhabited by a child who left. They are not just costumes, mementos from past Halloweens and parties–innocent, delightful and silly. Orphan Suits are like the skin a snake outgrows and must shed. An orphan suit is constructed around a void. Here, the void is not a limitless, ominous black hole but is surrounded by layers of soft fabrics with elaborated textures. Each fragment of material represents an accumulation of lived experiences. The discarded and castoff materials in each piece reinforces the sense of neglect and the rush of time. They also suggest a child’s ingenuity to construct with the materials at hand. My use of stitching recalls a tailor or a surgeon’s handiwork. Here a needle can either mend or heal. There is an implied optimism in each work. Yes, the occupant outgrew his or her shell, but this was a part of the natural course of maturation—a regeneration that is triumphant and hopeful. Whimsy is paired with dread as we all carry a certain amount of darkness within us, be it loneliness or loss, which we can embrace and even surmount. There is a wisdom in looking back at past experiences and the coping mechanisms that a child would use.

The self-reflective nature of these works and the sense of isolation they communicate was partially influenced by the sense of disconnection and a strong longing to reconnect born out of the effects of the pandemic.