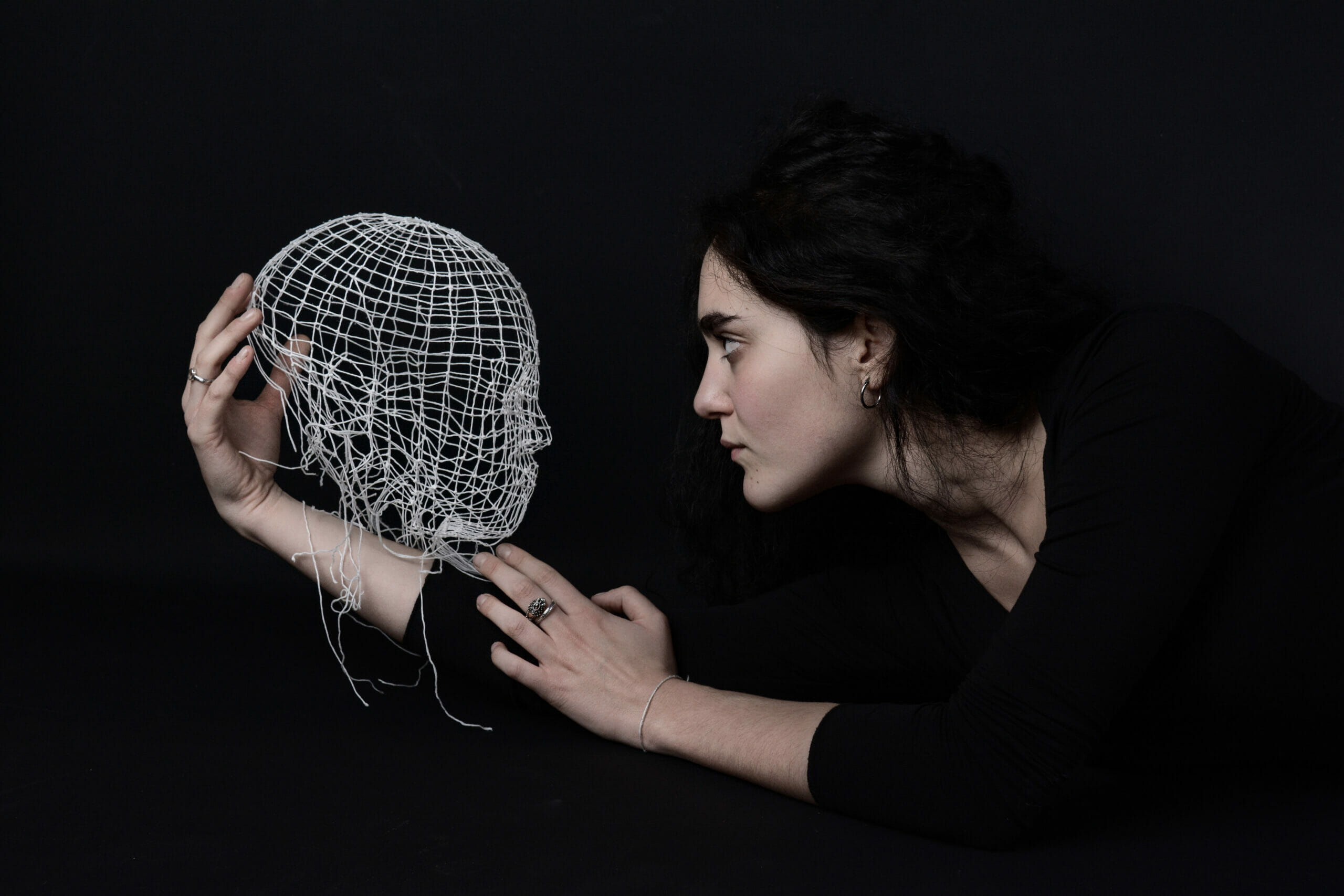 The interviews On the threshold of the Fine Art Academy led me, this time, to the work of Sophia Ruffini, born in 1997, currently a student of the course in Sculpture and new contemporary technologies at the Academy of Fine Arts in Macerata. Starting from her thesis “La pelle, l’armatura, la muta” (The skin, the armor, the moult), passing through the projects she created for the Casamatta Review in Fano, for Paratissima Turin and for the Festival del Tempo in Sermoneta, I tried to investigate where her research has taken her and in which direction she is orienting her experimentation and her work.

Slender, fragile, subtle yet thanks to its flexibility and ductility, capable of becoming so strong and solid as to forge ‘armor’: this duality, the strength of the synthesis of opposites often returns in your work (good / evil, internal / external, full /empty). Is that the reason you chose yarn as your medium?

Certainly. The thread is the essential, inconsistent, primordial, generative and subtle element, but in the interweaving of the weft it becomes sufficiently strong and indestructible.

The knot instead is a very powerful symbol, which represents the condensation of matter, a clot of tension, energy and power. It is evident that it contains a mystery.

In the past, the duality and the disagreement it brings has been very present in my works and in my life, but I am increasingly convinced that the truth is not in black and white (which is sometimes necessary), but in the fusion of the two. The knot for me represents this fusion.

Our feelings and actions, what and who are around us, are complex elements. An intertwining, an irregular texture is what can best represent them. The complexity of a grayscale.

Therefore, I would not speak of opposites, but rather of ambivalence. It is sufficiently hard and also fragile, and the dividing line is always not very clear. It is resistant but also fragile, it is in its inconsistency and ambivalence that a sacred space is generated. One thing does not eliminate the other, the parts coexist.

The body is a universe that you investigate, sections, break down and reassemble. What is the origin and the path of this research? And what, in your opinion, is the relationship between body and identity?

The body, and everything it represents, is a strong source of inspiration for me. The corporeality is closely linked to our personal identity, working on and with it has meant analyzing the different parts of myself, and in some way searching for and mending myself.

The intertwined white net was an empty and abandoned body, an attempt to regain possession of its shape by not being crushed by it.

But the path was still tortuous, so I descended into the depths of the bowels, finding myself face to face with a lump in my throat, with a stitched heart, with a nailed brain. This inward journey led me to create first “Tuta anatomica” (Anatomical suit) and then the series of organs.

This gut feeling was very heavy, like a retching, so I tried to undress from it with “L’appendiorgani” (The organ hanger). I was amused by the idea of ​​going home and hanging up the brain instead of the coat. It would be very useful.

So yes, the relationship with our body is essential for understanding and being accomplices of our identity and relating to each other.

And I investigated this vision towards the outside with “La pelle, l’armatura e la muta” (The skin, the armor, the moult) where the skin becomes the transcendental line and symbol of vital sensations.

The free threads of your sculptures throw a bridge to the other side, outside the perimeter of the work – and perhaps of the artist. An extension that is a search for connection and communication with the user, with the world, or, rather, the expansion of that interiority that we conventionally refer to as ‘soul’ or ‘spirit’, a dimension of man, in short, that does it exceed the physical, visible, tangible one?

The filaments try to cling to life, to something, they are little bodies of resistance.

We tend to have a neoplatonic conception of the concepts of bodies and soul, but the body is not our prison, it is we who move around the world, and the soul may not be an entity, a will-o’-the-wisp within us.

I imagine a soul, similar to that of the philosopher Jean-Luc Nancy, which is an extension of the body, which becomes more majestic the more it experiences; therefore in my works it becomes filamentous tentacles: they look for connections, conjunctions, the Other. If that’s not the soul!

Between physical and spiritual, there is a very fine line, which consists in the way of relating, of seeing, of living, it is a change of perspective.

Is art a language that allows you to encode, decline and convey your emotions? In this key, does it also have a cathartic and therapeutic function?

Yes, it understood that immediately. It has a cathartic and reflective key for me now, but not only. The use of thread has been for many artists before me, an instrument of catharsis and integration of personal experience. In this regard, I remember the phrase of Bourgeoise: “Making art is not a therapy, it is an act of survival”.

My work therefore starts with me, but it does not go to me, I believe that those I have dealt with are universal themes, otherwise it would become self-referential and boring.

Even if you would not say so from my works, I am quite restless, I always think or ruminate and I need to create, transform, find connections between ideas. I believe that in some way designing is a reason for life and also for escape.

(I) Take a position and then run away and find another more suitable for the moment.

Wire sculptures but also installations: what relationship do your works have with space? And how do you relate to the environment in which you set up your works – for example, does the artist / work / space dialogue contribute to the genesis of the installation?

Until now, I have never had the opportunity to operate in a site specific way, so the set-up was something thought of when I was actually face to face with the place used. This way of interacting with space represents a challenge and an extension of the works, it is not a static path: often new narrative discourses are created and the meanings change if placed in different contexts.

To speak concretely, an installation that has satisfied me very much is the one done at Bastione Sangallo in Fano, on the occasion of the CASAMATTA 2020 exhibition: I had available the space of the casamatta, a sort of cave in which you could peek and see a suspended body in pieces, and the heart illuminated by a red light was an invitation to enter, a mark of presence.

Before the final set-up there are often last minute changes and dismantling a rain (a shower) of rubble.

My structures have a strong conceptual relationship with space, they look for it, they try to stay inside it in the truest possible way (to resist it?); they are transparent, they are crossed by it. Speaking aesthetically, sometimes they get sucked into space, they can even disappear into it.

Space, on the other hand, is something that I want to face, into which I want to throw myself and explore in new productions.

In the last works the skin becomes armor and the suit becomes synonymous with rebirth and opportunity; always in progress metamorphosis between protection and connection with the other …

My latest work “The skin, the armor, the moult” reflects on the meaning of our skin, the outermost part of the body and the primary organ of “feeling”. During the quarantine, or rather more precisely when it just ended, I experienced a period of great apathy and sadness. I wondered why this not feeling?

Again, the answer came from my body. This sentence by Umberto Galimberti is very important for the development of my thesis work: “My body is not in space and time, but it opens up space and time as distance or proximity … only by running towards the world does the body rescues itself. In this sense the body is always out of itself, it is intentionality, transcendence, immediate outlet on things, original opening, continuous project and therefore future projection “.

I imagined that my skin had thickened so much that it became an armor, an shell, confinement of the body to the bodies, a non-osmotic envelope, a barrier that prevents contact. My “Armatura nera” (Black armor), created by making xxxx knots, represents my skin, and its change is the attempt to get rid of it, finding a more natural and alive one.

The need to lighten up and feel again.

What does making art mean for you and what do you think is the role of art and the artist in contemporary society and, more specifically, in these times of change? What project are you working on (or would you like to work on)?

Someone once told me that being an artist is a way of approaching the world, a lifestyle, I believe that the most important thing is to create, play, think and express yourself to let someone else express themselves.

The stereotypes of unregulated and bohemian artists are exciting, in small doses, but I think the method is important, recognizing the work and the thinking behind the work.

Art is a language, sometimes it can be committed, others not, the important thing is that it tells us something, in the most sincere way possible. At this moment I am interested in speaking sincerely, only in this way are solid and true things created.

Currently I have exhausted the theme of the body, therefore I find myself in the moment of storing new stimuli and ideas. I would like to work on language, and the node represents a very strong one, I refer to the Quipus of the pre-Colombian populations, for example.

Another trend could be that of the concept of space and home in relation to hospitality. I would like to invite in the house all the unwanted guests that, with so much fervor, we try to hide from ourselves and push away.