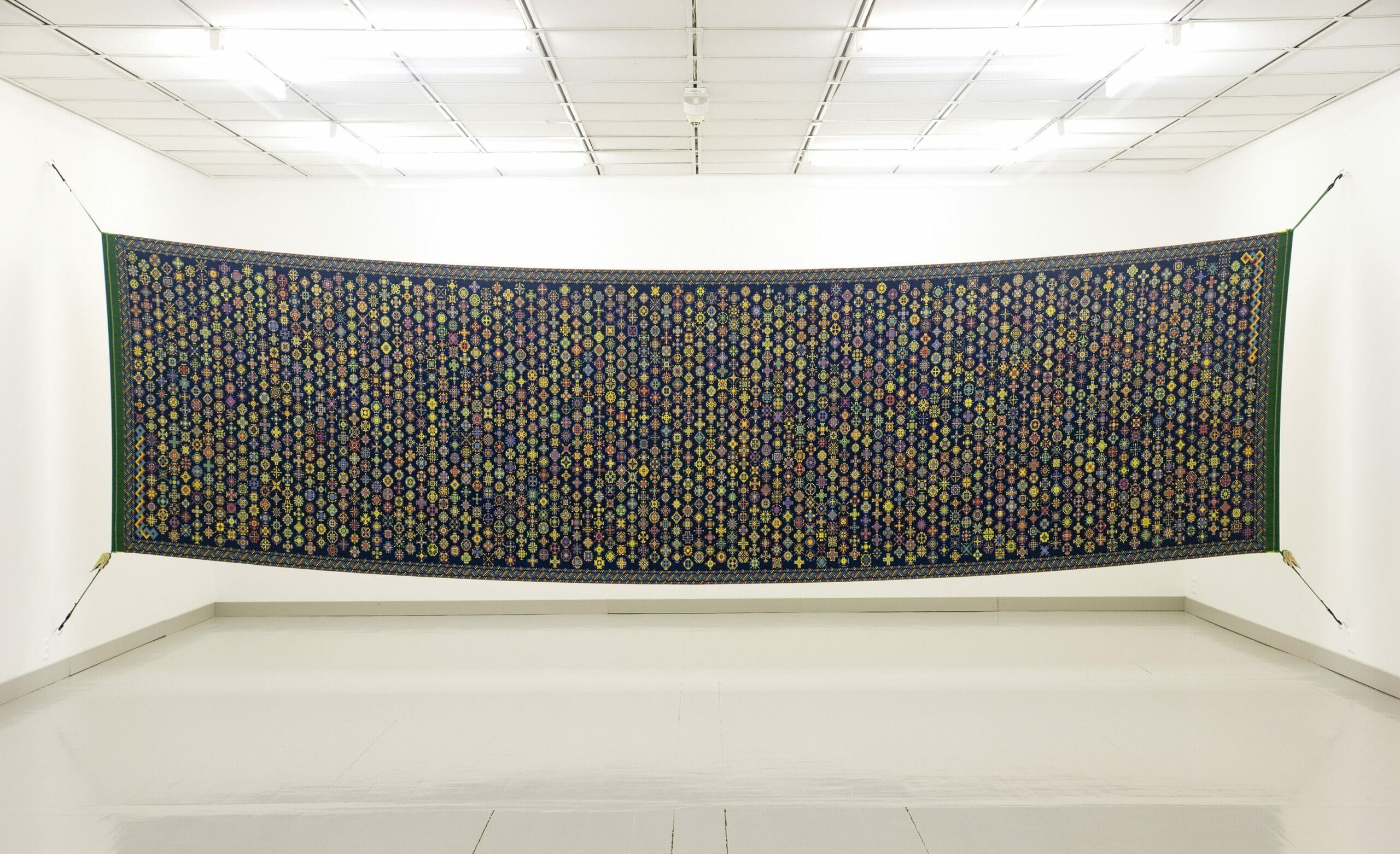 Still discovering the protagonists of the Valcellina Prize with this interview with the second prize, Søren Krag, danish artist born in 1987 in Silkeborg and now based in Bergen, Norway. He has attended The Art Academy of Jutland (Aarhus), Srishti School of Art, Design and Technology (Bangalore) and graduated as an MFA from the The Art Academy in Bergen in 2019. Recent exhibitions include participation in ‘Artapestry6’ (Silkeborg), Statens Høstutstilling 2020 (Oslo). IV Textile and Contemporary Tapestry Triennial (Moscow). In 2020 Krag was awarded the Lumen price for technology: Nordic award, and was the winner of the 2020 Talente-Prize in textile. His work is represented in the collection of the The Art Museum in Sogn & Fjordane(Førde, Norway)

Digital painting and jaquard weaving: how do you combine technology and tradition, past and future?

I produce work within a range of artistic disciplines with a special focus on utilizing electronic and digital tools. An important part of my practice is creating digital ‘paintings’ using relatively simple software. In this work as well as weaving, I seek to use the respective methods/medias ‘limitations’ as an aesthetic starting point.

Many of your works are tapestries. how did you come to choose the textile medium and in particular the tapestry?

I am preoccupied with aesthetic ideas of symmetry and ornamentation, which have permeated the history of art(‘s and crafts), and which have wandered both historically and geographically between different civilizations and cultural regions. Across cultures, weaving has been used for practical, decorative, spiritual and artistically expressive purposes. In addition to the aesthetic dimension, I am thus also interested in the connection between aesthetic expressions and the ideas that are sought to be conveyed through this.

Awarded at the Valcellina Award, your work “Deux Mille Fleurs” is a great tapestry jacquard woven. Can you tell us more about this extraordinary work?

Flowers are among the most consistently reproduced representational forms throughout the history of visual art. Though flowers have appeared in art for thousands of years, first evidenced in funerary motifs in the earliest Egyptian dynasties, they have been used mostly as a decorative motif complementing or framing more ‘important’ elements. The term ‘Millefleurs’, from French meaning literally “thousand flowers”, refers to a background style used in medieval and early renaissance tapestry consisting of many different small flowers and plants, usually shown on a darker backdrop, as though growing in grass.  The term is of course hyperbolic, merely alluding to an amount of flowers too numerous to count. I, however, chose to approach this quite literally, in fact doubling the number, arriving at the title “Deux Millefleurs” or “Two Thousand Flowers”. Producing tapestries was traditionally a complex and costly undertaking involving the division of labor under the guild system. Weavers were obliged to repeat figure designs by members of the painters’ guild, but could design the backgrounds themselves. Owing to this fact it may be observed how each ’bouquet’ or plant is individually designed, improvised by the weavers, in famous works such as ‘The Hunt of the Unicorn’ and ‘The Lady and the Unicorn’. In an effort to further extrapolate this reversal of the image hierarchy, I chose to forgo figures and narrative altogether, focusing solely on the ‘background’, in particular what I see as the most striking attributes of flowers; color and symmetry. In a nod to the aforementioned division of labor, the work was created in collaboration with engineering PhD Jonathan Riise. At the core of the project are computer-generated, hyper-stylized, symmetrical ’flowers’. To generate the flowers algorithmically, a fixed set of parameters were established.

Most of your works have large dimensions. How do they relate to the space that hosts them? And with the public? What messages would you like them to convey?

I persive the woven tapestry as a three dimensional object and i prefer to present them as such- hanging them in space(not on the wall) with both sides visible. My work ‘Enuma Elish(I,II,III)’ of 2019 illustarets quite well a number things im interested in and continue to develop in this regard. The three textiles are hung in such a way as to consitute a joined sculptural object. The hanging waeves are coupled with rubber flooring forming a square directly below, in addition colored bungee cords are used for suspension. This as well as the use of strap tensioners in “Deux Mille Fleurs” showcases my desire to include other medias and readymade quipment in my tapestry installations. By suspending from ceilings, attaching to floors, walls or other present arcitectual elements I find that the works establish a more comepelling presence and integration with the surroundings.

What is the genesis of your works? How do you proceed from the idea ti the finished work of art? What are your sources of inspiration?

I try to orientate myself broadly both on the contemporary art scene and through historical art. Quite often the inspirational input for my work is constituted by rather strange amalgamations. During my studies in Bergen I fondly discovered what I regard as the ‘trinity’ of Norwegian textile/tapestry art; Frida Hansen, Gerhard Munthe and Hannah Ryggen. In a broader sense some of the things I like to look at the most are; Roman/Byzantine mosaics, Islamic art, Interlace Viking Art, Villiam Morris, ‘De Stijl’ movement, other modern artist and of course Anni Albers, generally trying to extract the many similarities between these and many other things.

How has your work changed over time as you proceeded in your artistic research? Is there a work you are particularly attached to or that represents you more than others?

My practice of digital painting was quite well esthablished when i started to study the technquipe of digital Jaquard weaving. In the begining i focued mainly on ‘translating’ digital images into a wowen format, however since then an insteresting connection between the the two has developed where my painting style has changed to accomodate the loom.

What project are you working on?

In a number of recent works, I have worked with mythical motifs on a large scale. I seek to reinterpret the mythical motif in a contemporary context and also deal with the visual history of the depicted myth. I continue to work in the visual space between abstraction, ornament and representation and in the future it is my aim to produce large scale narrative tapestry works and experiment with installation.