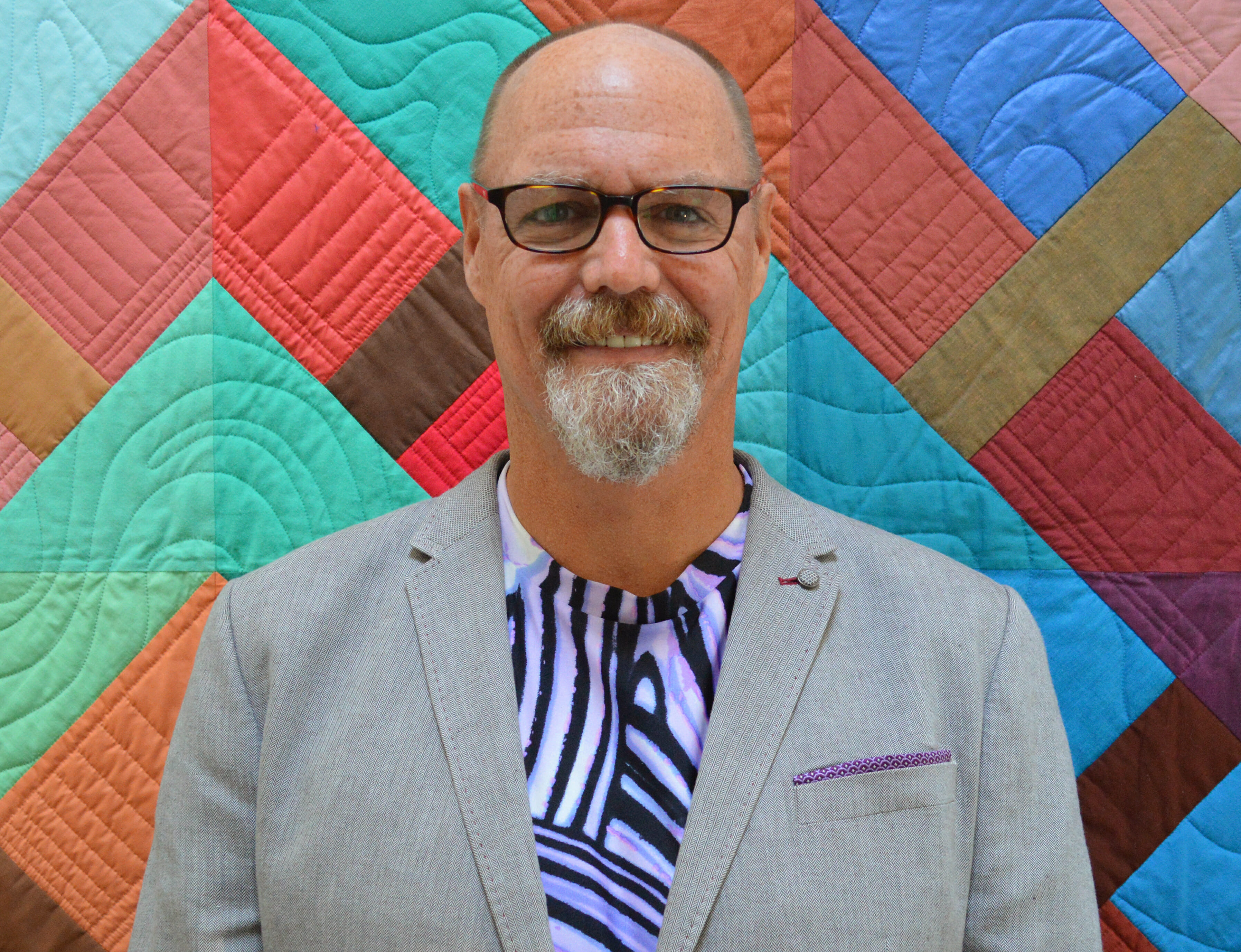 Hi Bill, many of us Italian quilters, virtually know you for your facebook page and your very interesting blog “Wonkyworld”.

Your study work, collecting and information gathering on the history of quilt in America, is remarkable and very important.

For our first issue of our magazine, we would like to start with an overview of the rich world of American quilting collectionism and  its history.

Thank you! Before now, the everyday activities of collectors were not usually seen by the public. When I document my collecting activities in a blog or social media post, it begins to reveal the process of collecting—and it is different in the 21st century than it was in the past. We are living in the information age, and I am among the first group of collectors actively using the internet. I buy quilts from online auctions and use social media to share them. I talk about being a collector and what it’s like to collect today.

I ask you some questions, but you feel absolutely free to add others, to talk about quilting freely, giving our readers all the information you’ll want.

My first question is perhaps a little obvious: when you started collecting quilts and why?

I started collecting quilts in 1989, when a girlfriend from Germany and I were in New York City. She brought me to a private showing and sale of old quilts hosted by Shelly Zegart, and I fell in love with a wonderful, old quilt.

I wrote all about it in a blog post for “Why Quilts Matter, History, Art & Politics”

Which is the first quilt you have bought?

Photo: Pieced quilt, c. 1850, Kentucky. My first antique quilt was very graphic and modern looking, but also finely made and in good condition.

Do you only buy quilts from the American tradition, or do you also look for old quilts from other manufacturers? Europeans for example?

I admire quilts from other places, but focus on collecting American quilts. The history of quiltmaking in America reads like an art history book, with distinct styles of quiltmaking in specific periods. A lot of the quilts are surprisingly modern looking for their age. There was a lot of originality and creativity in quilts, and of course, they represent the longest unbroken chain of women’s creative expression in America.

Photo: Pieced and appliqued quilt, c. 1920, Wisconsin. Bold and modern, this quilt was originally sold as a “cutter”—a quilt in poor condition that could be cut up and used for crafting projects. Its condition flaws were minor, and the quilt was clearly a masterpiece of modernism in American quilts, so it will never be cut into pieces.

Can you talk about the different types of fabrics that were used in different age?

Quiltmakers use what is available, and throughout history there were various materials that were popular at different times. Some of the early quilts made in America are wool and linen. Others are cotton, and cotton has really been the most popular fabric in American quilts. In the Victorian period, silk, satin and velvet were popular, and in the 1970s, polyester was used a lot. Today, quiltmakers use all types of fabrics, but primarily cottons.

Can you tell us about the quilts of your collection? Is there one quilt or block you are particularly fond and whose story you would like to tell?

I spent many years collecting and researching the pattern we call New York Beauty, and the information was included in my first book, “New York Beauty, Quilts from the Volckening Collection”. Today, I prefer to focus more on how and when naming quilt patterns started to become part of the tradition.

In the middle to late 1800s, there were magazines such as Godey’s Lady’s Book, which presented some patchwork patterns but did not give the patterns any names. Later publications from around the turn of the century (1890s and later) included names for patterns. Pattern names were sometimes based on tradition, but they were really more part of the marketing efforts.

Barbara Brackman’s Encyclopedia of Pieced Quilt Patterns includes references with each pattern, and you can read more about the origins of each source publication in the back. I urge other historians to look at these references, but often they do not look at them. The references are key to understanding how pattern naming became part of the American quiltmaking tradition.

In your book “The New York Beauty”, present your collection of quilts collected in twenty years of research and you tell the history of this particularly fascinating block.

Can you tell us something about the story of this pattern?

The pattern first appeared in the middle 19th century, when quiltmakers in America experimented with complex, geometric designs. Some of the oldest examples of the quilts were found in the southeastern United States, in places such as Kentucky, Tennessee, and North and South Carolina.

Southern quilt historians do not like the name “New York Beauty” and argue for other names as the “original” or “early” names, but there is really no evidence to support those claims.

The name “New York Beauty” first appeared in publication in 1930, when Mountain Mist used the name for one of its quilt patterns. The historic account printed with the pattern said it was an old name, but it was not. The pattern was inspired by an older quilt, now part of the Mountain Mist Collection at the International Quilt Study Center and Museum. The person who originally owned the inspiration quilt called it a New York Beauty, and it was most likely a name one family used rather than the official name for it. The name was soon adopted by the masses, and I think it was because the design elements were related to New York, the Statue of Liberty and the art deco crown ornamentation of the Chrysler Building.

In your collection there are many quilts from the 70s. Not everyone recognizes the cultural value of the quilts sewn in those years, often in polyester and not in cotton. Can you explain us the reasons of your choice?

I was a child in the 1970s. Although our family did not make quilts, the quilts of the 1970s remind me of my childhood.

America experienced a significant quiltmaking revival in the 1970s. The 1976 Bicentennial celebration gave people a reason to explore and revive quiltmaking, so millions of Americans started to make quilts for the first time in the 1970s.

When I began learning about quilt history in America, historians often referred to the great American quiltmaking revival of the 1970s, but nobody seemed to have a collection of the quilts. The period was among the most important in American quiltmaking because it also revived the quilt industry, which is today a thriving, multibillion-dollar industry.

Polyester is interesting for many reasons, but in terms of its purely visual qualities, the material resists fading, and the colors are exceptionally vibrant. When we see polyester quilts from the 1970s, there is no question about what the original colors could have been since the quilts did not fade.

When I began collecting quilts of the 1970s, hardly anyone else was collecting them, so the quilts were inexpensive and increasingly available. I purchased many of them for $50 or less, but sometimes people gave them to me for free.

I saw beauty in the quilts other people did not want, and now a lot of other people see the same beauty I do.

Your rich collection is the protagonist of many exhibitions in the United States. What are the quilts that have been most successful with the public?

Each group of quilts appeals to its own audience, and each collection has traveled to different places. The New York Beauty quilts were the subject of my first book, published by Quiltmania in 2015. That year, 50 of the quilts from the book were displayed at Salon Pour l’Amour du Fil in Nantes, France.

In the same year, I also had my first exhibitions of 1970s quilts, at QuiltCon in Austin, Texas and at the Benton County Museum here in Oregon. In 2017, a select group of 1970s polyester quilts appeared in an exhibition at the International Quilt Study Center & Museum in Lincoln, Nebraska.

I am currently working on a collection of Hawaiian scrap quilts, exploring a new, undocumented tradition of patchwork made of scraps from the mid-to-late 20th century Hawaiian garment industry. It’s going to be a real eye-opener for quilt lovers, especially people who are only familiar with traditional Hawaiian applique quilts.

I love the opportunities to exhibit quilts, but often feel like more people see the quilts when they appear in publications such as magazines and books. Because I want as many people as possible to see the quilts, I share photos as often as I can.

But besides being a collector you are also an artist!  Your quilts have been published in magazines and have won awards.

Tell us about your quilts, where you get inspiration and what you like to do … and do not forget to send us pictures of your art quilts and your collection!

Before I was a collector, I went to art school and set out to be a photographer. I have always enjoyed expressing myself creatively, and quiltmaking is one of many ways. I have made about ten quilts, even though I am not very good at sewing. I like to think about quilt history when I make a quilt, mostly because I want the work to be something new and different, and I always want it to reveal my individual point of view as an artist.

Although I do not sew often or make many quilts, I use photography a lot. I do all my own photography of the quilts in my collection, including the shooting and Photoshop editing. Being able to produce photos of quilts helps me share them with a large audience.

Photo: “Wild Eyed Susans” (2014) by Bill Volckening. This wool quilt was made with repurposed pieces of a vintage quilt, plus embellishments.

To conclude, we hope to have the pleasure of being able to host your collection here in Italy. It would be a fantastic experience and a great opportunity to admire these works, which constitute an important piece of the history and culture of Textile Art.