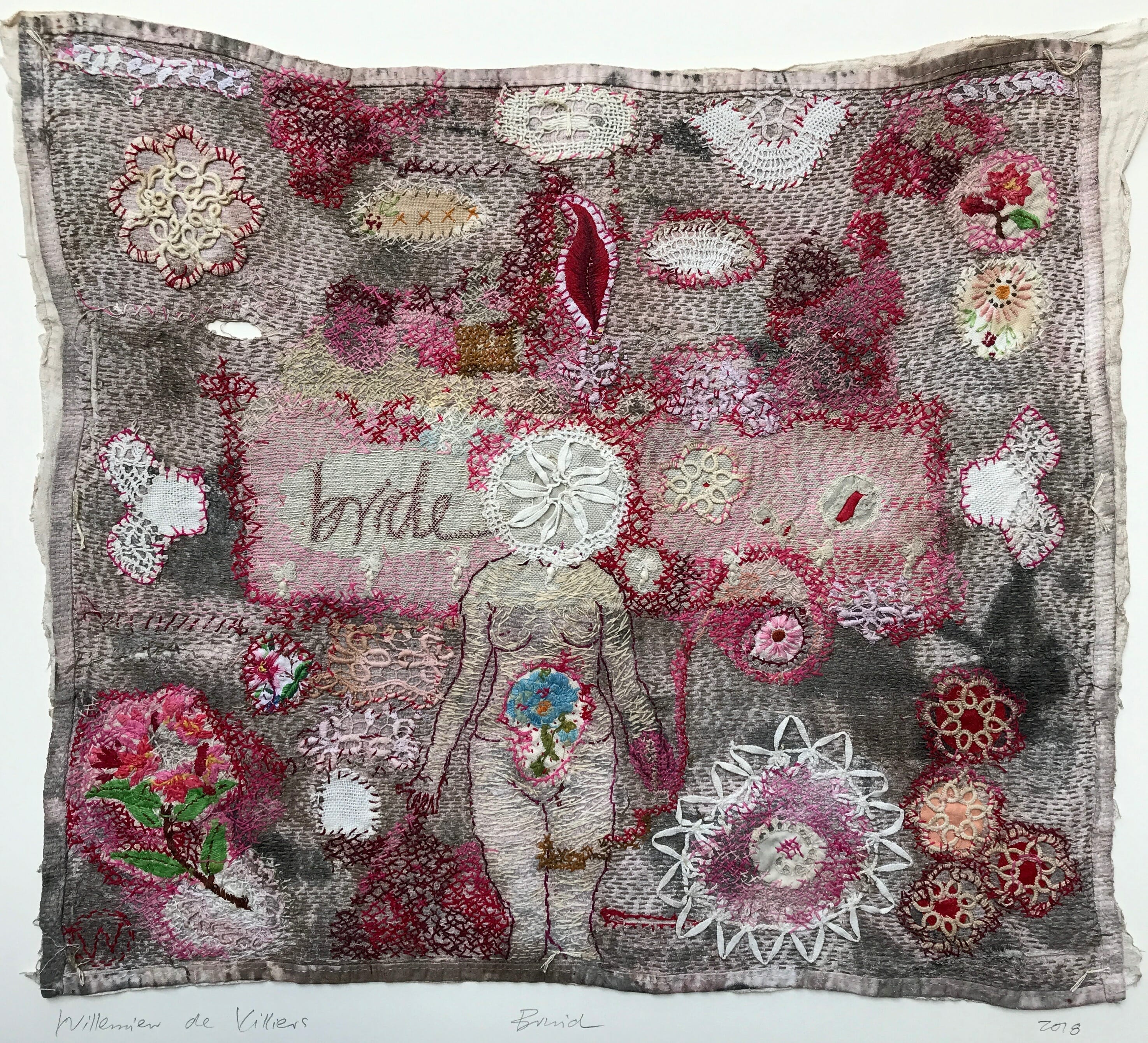 Willemien De Villiers is a South African artist and writer who lives and works in Muizenberg, Cape Town.

Through her textile works, Willemien goes beyond the boundaries of traditional culture and subverts the idea of embroidery as a delicate feminine activity or simple means of decoration, showing instead its enormous communicative potential. Using the themes of nature, her works deal in an intimate and personal way with the themes of patriarchy, domestic violence, gender differences, division and social disparities.

Willemien, why is your choice of artist aimed precisely at textiles as an expressive medium? Can you tell us about the path that led you to become a textile artist?

For as long as I can remember, I’ve loved textiles, especially natural fabrics such as cotton and linen. I often joke that I was a flax plant in a previous life, because of my affinity for this particular material – the smell, weight and rough texture immediately transport me to a place of great happiness.

I love working with my hands, whether with clay, painting, printmaking, or sewing – I’d rather sew an entire garment by hand than get my machine out to do so. I like the fact that it’s a silent process that almost inevitably becomes a meditation.

After I finished my Fine Art studies in the late 1970s (University of Pretoria, Gauteng, South Africa) I started a job as a designer at a textile printing factory that still used flatbed printing methods alongside more advanced rotary printing. When I left, I continued printing fabric at home, often enhancing the designs with stitching. I took a big detour, before finally getting back to textile work, by spending a decade writing (I have two published novels, as well as several short stories), working in a small ceramics’ factory, and spending time painting (oil on canvas).

How does South African culture influence your way of making art?

There are no overt influences that I’m aware of, but subtle ones must be at play – probably difficult for me to notice. Although I’m always inspired by nature, and natural phenomena, the themes that I engage with in my work come from a deeply personal place. The series I did to highlight the scourge of domestic violence, and other forms of violence against women and children, was influenced by what (sadly) could be called a culture of violence in South Africa. It remains a patriarchal society with little regard for women’s rights, despite our progressive constitution, and laws.

Which of your textile works represents you most and to which do you feel most attached?

Every piece I’ve ever done, follows on what I did before. It’s difficult to isolate a favourite – having said that, a few stand out. For a period of time I felt very drawn to images of people saving strangers, for example in a sea rescue context, or first aid administered at an accident scene. I suspect I was seeking some kind of emotional healing because of the disconnection I often feel, living in a deeply divided society, in one of the most unequal countries in the world. The Save Me series is an example of this. I also loved doing a small series where I imagined a world where a different kind of non-toxic masculinity exists, a tender and kind pink one. I used vintage anatomical diagrams of male reproductive organs and stitched them onto old linen tea tray cloths, intermixed with floral motifs. I’d like to return to this theme someday and make some more.

In your biography you talk about embroidery as a devotional act, a form of meditation. Can you tell us what this means?

I’m not a religious person, but feel that any repetitive act, done with deeply felt intent and purpose, slows the mind down to the here and now. In that sense, making stitch after stitch after stich, row upon row upon row, begin to feel like counting prayer beads, or doing repetitive prostrations … I would call it a devotion to time, or timelessness.

Stitching, to me, is an act of recording time.

In your textile works, what is the relationship between abstract and figurative representation?

My earlier works all had figurative aspects to them, usually images of women, birds, animals, botanical and human morphology, especially those of reproduction, which is so similar across all species, whether animal or botanical. I’m drawn to images from medieval times to about the16th century, where science wasn’t so clear-cut and absolute; where the boundaries between plant and animal and mineral were still blurred. I love the imagination at work there.

Woman with Turtle is an example of a freestyle connection I made between the mineral, plant and animal world, after examining various images from that period. I work intuitively, following my instinct; it’s not always possible for me to explain how I get to a final image, in this case a geometric symbol, the embryonic image of a turtle, the seed morphology of an apple, plus a flowering plant. The end result, to me, captures a longing to connect to all living things – human beings are, after all, not separate from the natural world, but part of it.

Lately, my work has become more abstract, a distillation of my lived experience, one could say, of being a woman in today’s world. I’m exploring the colour pink, in all its hues, from incandescent to pale baby pinks, to the gloriously dirty spectrum

What is the most recurrent theme or subject in your work? How do you choose the subjects of your works?

My work will always have a feminist message – the feminist cause is as important as it ever was and lots more needs to be done to raise awareness about the inequality between men and women that still exist today, worldwide. Sometimes the message is in-your-face and quite brutal, as with my Domestic series, where I used newspaper reports of domestic violence as my starting point. Other times it’s more playful, as seen in the Female Notions series where I used haberdashery notions (those bits and bobs female undergarments need to function properly, like hooks and eyes, suspender clips, bra straps, etc.). Mostly it’s somewhere in between, as seen in my Bride series, where I explore the emotional weight of the word ‘bride’ – so different to that of ‘bridegroom’.

What kind of textile materials do you prefer?

I only use secondhand, natural, vintage fabrics like cotton or linen. The more torn and stained the better – I wish I could rescue them all from being thrown away. If they’re not stained, I add domestic stains, using coffee, tea, beetroot, red wine, turmeric; choosing to celebrate all those stains most women are trained to remove.

Willemien, you are also a painter: what is the relationship between your paintings and your textile art?

Both mediums show a certain horror vacui – a fear of empty space (Latin) or fear of emptiness, from the Greek kenophobia – that I seem to have. I do the work I do, in the densely patterned manner I’m drawn to, in order keep a feeling of emptiness and disconnection at bay. It’s a compulsion that anchors me to the real world

Are there any artists you’re inspired by?

I’ll always find the work of the great feminist artists like Kiki Smith, Louise Bourgeois, Georgia O’Keefe, Judy Chicago, Ana Mendita (and many more) hugely inspiring and I often remind myself to spend more time online to immerse myself in their work; a kind of a reboot and recharge. Closer to home, I feel excited by Mary Sibande’s sculptures and Igshaan Adams’ moving textile installations.

What are you working on right now?

I’m working on a series that explores the construct of ‘girl’ and ‘woman’, viewed through the male gaze. I asked my Instagram community to tell me what they were routinely called, as girls and young women, by the boys and men they grew up with. It was a very enlightening exercise, and I now have a much expanded vocabulary of nasty words and terms that are used to describe the female population. Endearing terms were in the minority, and often very patronising, like ‘pet’, or ‘doll’. It is what it is, and sometimes one just has to laugh at some of the terms. I hope to create a visual representation of this reality – which is sadly still so prevalent – that is both beautiful and healing; transformative in some way.

Useful links to find out more about my writing (Kitchen Casualties, Jacana 2003 and The Virgin in the Treehouse, Jacana 2007)