The continuum hypothesis| Museum of Lace and Fabric 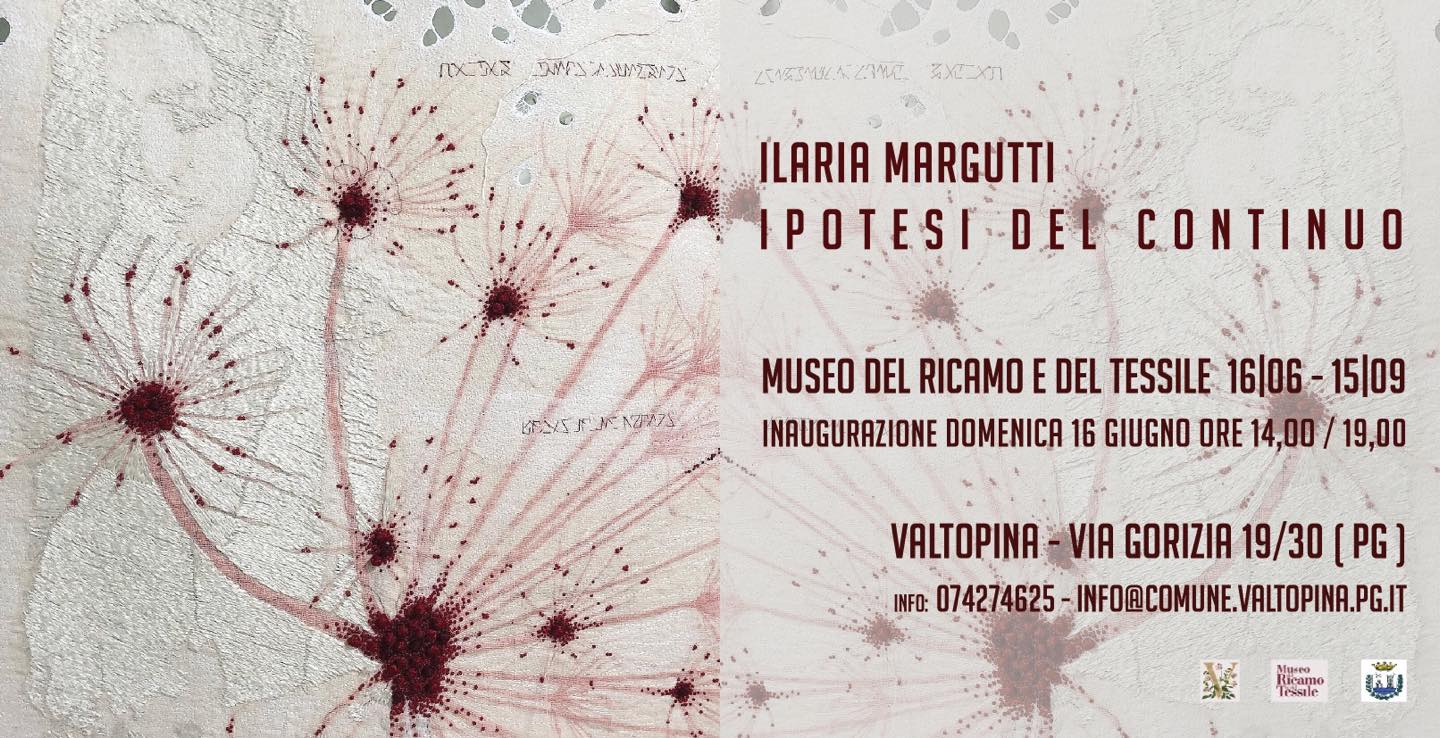 From 16 June to 15 September, Ilaria Margutti’s works will be on display in the Museo del Ricamo e del Tessile in Valtopina to dialogue with traditional fabrics and ancient laces,via Gorizia 19/30 (PG)

A special thanks goes to Maria Mancini, who has long been committed to the realization of this project and who has always supported the need to create a dialogue between contemporary art and tradition through the techniques of embroidery and weaving.

Some of the works in the exhibition are part of the new production and for the first time are presented to the public.

In mathematics, The continuum hypothesis is a theory advanced by Georg Cantor concerning the possible dimensions for sets of mathematical infinity.

Starting from this point, which suggests an unlimited continuity of the sets, the series of works presented, want to reflect on the total impossibility of escaping the dilating rhythm of the universe for each element that inhabits it, creating consecutive and perpetual expansions.

We were born in its expansion and in every form, even the simplest, lies its rhythm.

“This, marks the breath and accompanies the mind to the unspeakable boundaries of the universe and you can catch it during the long hours of work sitting with the frame in your hands”.

In the works embroidered and enriched with natural elements that bind to the canvas almost like a promise of vastness, the figures, the words sewn or the flowers tied to dry branches, it is as if they wanted to show themselves in the invisible relationship with this universe, our habitable home.

“The house is as big as the world.I don’t understand it, until a night vision revealed to me that even the seas and temples are infinite.Everything exists many times, infinite times…” TheAleph/J.Borges

are nothing more than extensions of sets of infinite different, within which the laws of physics no longer finding concrete answers, rely on the rhythm of the sound of the cosmos, letting each question, opens the investigation to another together infinite.

It is a thin and imperceptible thread, like silk, that unites the forms of these flowers, a body that disappears in the shade of the canvas, leaving its mark, like a slight rippled surface of a water ring, which propagates until it reaches the circular movements of the universe, or a wild flower that extends its inflorescences like fractals in the shape of stars.

My research aims to bring out the back of the canvas, on which all possible transformations take place, all the invisible passages of gestures and movements of the surface, of which we do not recognize that the shadows, but if perceived, we would be able to grasp the codes with which Nature speaks to us and reveals itself.

“If we could understand only one flower, we would know who we are and what the world is.

Perhaps… there is no fact, however humble it may be, that does not enclose universal history and its infinite chain of effects and causes.  The Aleph/J.Borges