Irregulars against the Rules: “Crazy Quilt-Mania”. A long story 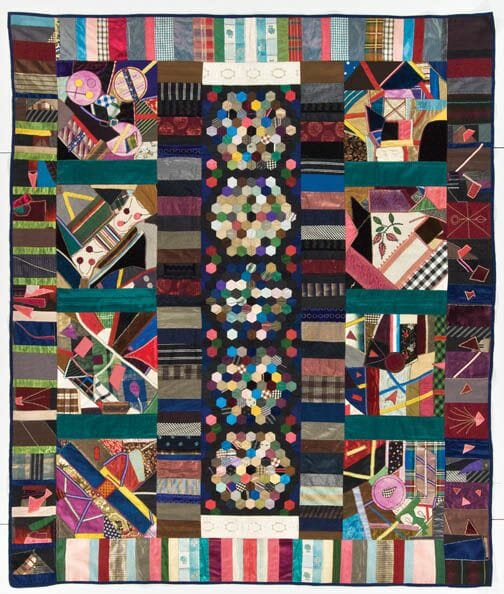 I resume my research on Crazy driven by the fact that today, interested in textile art, I find connection, not only in memory, with that old style that continues to fascinate the world of Quilting artists.

I do not speak of the manufacturers of fabrics that are renewed every year, never forgetting to suggest the old man, the historian as still good, perhaps combining it with other ideas closer to a quilt thinking, linked to this beginning of the century.

“Crazy” is an English word that means literally crazy, confused, I add free.

How does this term apply to a quilt? A piece of madness, this is better than anything else. Let’s look more closely.

The first answer, only descriptive, tells us that it is made of irregular, geometric pieces of different size and material consistency (silks, velvets, brocades) put together in an imaginative order, joined together with stitches embellished by the embroidery then made a little everywhere: imaginative embroideries, even complex, very special, and to close appliqués of pieces of precious lace, buttons. All the textile materials, stored at home as family memories: pieces of clothing, coats, shirts and even gloves are used to dial the top; on some specimens the embroidery is often done with thick wool thread. Because the crazy is not only made of elegant silks, but presents itself by necessity also poor and rough, born from the recycling of the used and this is the modern side that interests me. It should be noted that the “Crazy” is sometimes incomprehensible at first sight.

The first sensation is of great beauty and wealth but going deeper every “crazy quilt” presents a peculiarity that concerns and belongs to its author, who would like to say who he is, what he loves, his memories in a jumble of different elements . A “private”, a story, a drama told with witnesses. (how not to love him!) There is always, because of the age, a bit of comprehensible restraint.

Those ladies at the end of the nineteenth century knew how to achieve something traditional; learned from the grandmothers. Putting aside the ‘good rules of quilting’, is a strong, reasoned reaction to tradition and its fixed rules, almost forced (often crazy are not even quilted) and I like to believe that it means a rebellion to more than a few centuries of habits, and that this will happen not only in textiles but also in other fields.

The peak of the production of Crazy quilt takes place in the second half of the nineteenth century: we are in the Victorian era and everywhere the girls are invited to the joy of sewing. England is at its maximum splendor and extends to the Far East, in the newly born United States of America, Abraham Lincoln has abolished slavery, (unfortunately still remains to be done in that field even today), and it approves the democratic Constitution. Lincoln will be murdered, sometimes happens to US presidents.) Vitoria will live over ninety years, even this not unusual among British queens, leaving an image of moral symbol and loyalty, not only to the late husband, but in his country.

I allowed myself a historical digression that I hope stimuli and not boring.

What are women doing in that piece of the century in Europe and in the United States cradles and heirs of quilting? Where did they arrive? Has the emancipation of slaves also served them?

Black women who had fought for freedom gathered in community and began to create their quilting style.

The others study, travel and invent a profession. We are talking about wealthy bourgeoisie, with a good education.

Generally quilts were made by poor women for those who could pay them, even if the poor ones continued to struggle with their personal quilts that were going to make up an important part in every trousseau.

The American and British quilter were aware of everything that happened in this area through the press and the new specialized magazines. The crazy spread not only as a fashion but as a race between the British and the Americans.

And here is a good way to use all the fabrics in great, absolute freedom, the crazy offers a fantastic opportunity and a style, a technique to personalize your work.

The novelty fabrics such as rayon and acetates that are marketed only at the beginning of the twentieth century begin to spread and be used for clothes and furniture, and which recipient is better than crazy? A style that satisfies almost everyone: it incorporates tradition, and uses everything else in an innovative and extravagant way!

Someone described this way of interpreting quilting as a pause in a boring conversation and that the crazy was like the burst of laughter, liberating. How to say: invent and do as I please! And they were good women, full of imagination, innovators and creators of beauty out of the ordinary.

The message now was that quilting could no longer be a static thing, but dynamic open to many other artistic influences that can be interpreted, changed and incorporated as part of its development. To put it in today’s language, a melting that updates continuously. They were the beginning of a change. Tradition has been updated at the time, it has evolved and technology has helped in this transition.

The crazy aesthetic, right to use this term, conjugates and unites: abstraction, asymmetry, irregularity, etc., besides indicating a true rebellion, opens the way and goes hand in hand, anticipating the complexity of what will come after, widening the artistic field and contaminating with new trends, up to the actual Abstraction.

The radical approach to change is close to that of painters, just an example of Impressionism: they also wanted to break the link with the formalism of rigid academic art by rejecting it (beautiful the story of the “Salon des refusèes”). The crazy with its transformations opens the way to the Modern and is a moment of passage unrepeatable to all that will come.

Even today with so many differences, in full modernity, that style so linked to a vanished artistic period, such as the “déco” or the “liberty”, continues to be practiced with passion by numerous quilter, even in Italy.

“My Crazy dream” by Mary Ricard 1838-1915, Boston without quilting.
Personal memories and some references to the traditional.

I must confess that I do not really love the crazy-quilt style, at least at that time, but I find it interesting and useful and I like to think of those women who practiced it at the end of the 19th century.

Today their works are hung in the most important museums and are worth a visit. Many of those artists practiced different arts and in complete freedom: for example, painting, photography, science, not to mention those they wrote. The list would be very long.

Precisely in those years a special sensitivity was born in women with regard to politics and in particular the one that discussed emancipation, by now a loud voice was demanded of a right denied for centuries: that of voting for women. It’s only thanks to them, starting with the Anglo-Saxon world, that will come to universal suffrage.

Finally: that of Crazy is a moment in the history of quilting that would need a more in-depth examination: I’m not a historian, I’m a passionate one who draws stories from others; I dedicated myself and I think I understood something, maybe you do not share the ideas I expressed, but this is the result, for now.

My sources:
The University of Nebraska encyclopedia, with its collection of 2300 European and American quilts from 1870 to 1940.
The Getty Foundation
Two authors:
Beverly Gordon: “Victorian Fancy work in the American home” ed. 1988
Virginia Gunn: “Crazy Quilts and Outline Quilts 1876-1893” ed. 1985