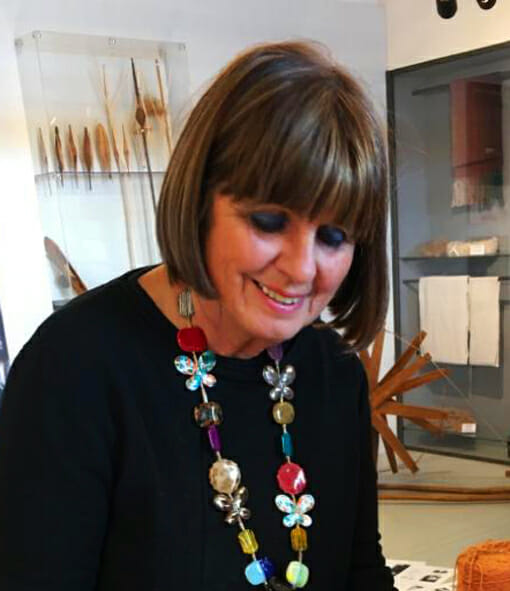 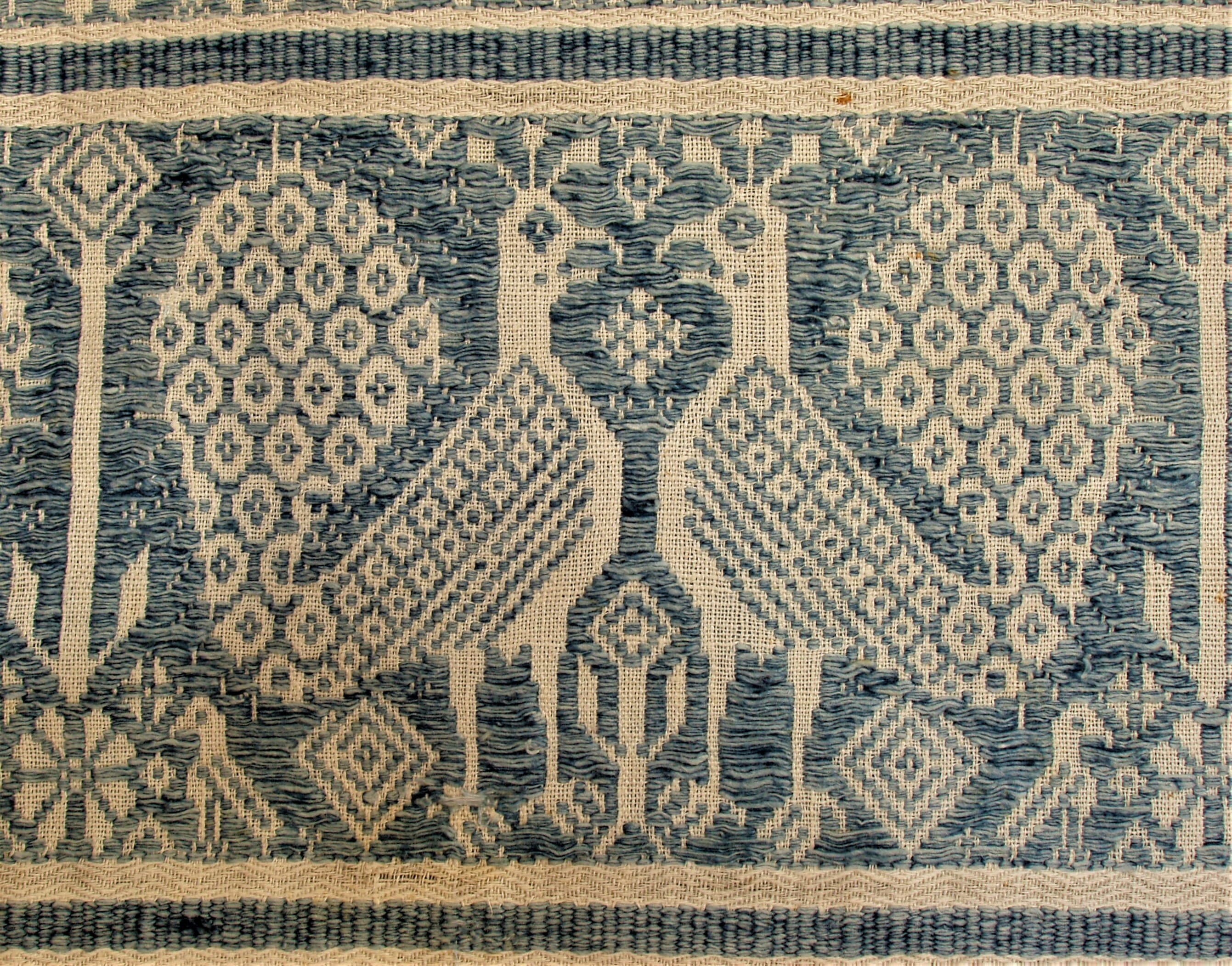 All the images belong to the photographic archive of Carmen Romeo.

Countess Giuditta de Claricini Dornpacher (1891-1968) [1] called herself Itta and, as she was not married, countessina. The de Claricini lived in the family villas between Padua, Rome and Cividale del Friuli (in the province of Udine), where they stayed in winter.

In the summer they moved not far from Cividale, to Bottenicco, a rural village in the municipality of Moimacco, to enjoy the seventeenth-century villa and garden. Itta preferred literary subjects and the history of art, knew Latin, spoke German, French and English; she loved and studied Dante, practiced drawing and painting. Her real passion, however, was to study and collect ancient textiles.

Collection[2] includes products ranging from the 15th to the 19th century: linen canvases with embroidered or woven motifs, lace and clothing accessories. The beauty and rich variety of the decorative and technical typologies represented, the exceptional nature of some specimens (artefacts still intact and among the oldest known in the Friuli Venezia-Giulia region) make the collection extremely relevant from a historical and cultural point of view. In the library of the Villa of Bottenicco there are three Itta publications, it deals with in-depth research on textile art, published between 1934 and 1948

These documents highlight a great knowledge of textile languages ​​and an awareness of how important this art was in all cultures. The countessina first understood the importance and studied The Longobard Tablecloth of the Sancta Sanctorum (editions of Art Emilio Bestetti, Milan, 1941): an ancient linen altar tablecloth (362 x 115 cm) embroidered white on white, found in Rome, under the altar of the Chapel of the Sancta Sanctorum (The Saint of Saints) in Lateran, dated IX century and made in Italy.

The results of the research generated a lot of interest and a dense debate! With the same publisher, the scholar, in 1948, published her most famous book: The Superfrontale said of Blessed Maria Benvenuta Bojani kept in the Museum of Cividale. The countess illustrates every little detail of this ancient heirloom (Velo, Mantile, 433 x 148 cm), with a scholarly and profound style. Her commitment has helped to safeguard and make known to the wider public the most refined expressions of civilization in an era in which perfect pieces could still be found and there were many noble Italian ladies who dedicated themselves to collecting, studying textile and the promotion of related trades.

The textiles of the de Claricini collection come mostly from Umbria or central Italy and excluding the belief-cover strips[3] and some towels, they are characterized as fabrics formerly used in the Christian liturgy.

Since ancient times, silk, “the divine thread”, and linen, “the sacred thread” have played a primary liturgical role. Christian materials and symbols evoked the divine present in matter, while the rigor and patience that the extremely slow execution techniques required, expressed a deep and total devotion. The intersection of the warp and weft threads, the succession of innumerable small points, the poetry and often the mystery surrounding techniques and productions, can still today recall the idea of ​​infinity and be read as a metaphor for life. The sacred vestments of the de Claricini collection impress with the ancient atmospheres evoked by designs, materials, and colors full of symbolic meanings.

[1] On the subject, Carmen ROMEO and Laura TILATTI; Itta de Claricini, Ancient Works and Fabrics, Juliagraf of Premariacco, Udine 2007.
[2] The collection, made up of donated or purchased materials, was established mainly in the period prior to the Second World War; on the topic: Mariella Moreno, “Perugian” fabrics and embroidery from the de Claricini collection, Notebook no. 1 of the Cataloging Center of Cultural Heritage of Friuli-Venezia Giulia, Passariano (Udine), 1976, pp. 46-58
[3]  The sideboard covers briefly described here are typical examples of those beautiful strips of linen and silk which in the Lords’ dining rooms adorned the cupboard floor on which the finest pottery was displayed

Pictures 2 and 3: Among the oldest pieces in the collection, there are four altar tablecloths, dated 15th century, which have come down to us extraordinarily intact [4]. One of the four is embroidered, while the other three are woven and ascribable to the genre commonly known by the names “Perugian, Umbrian, Umbrian canvases, Perugia fabrics”.

[4]For centuries, merchants have wreaked havoc on precious artifacts, reducing them into fragments to be used in the second-hand and antiques markets

Picture 4: Embroidered altar cloth, 206 x 75 cm, sec. XV; the detail of the embroidery represents a bird (peacock) in front of the flower garden = Paradise. The value of this artifact consists of the two friezes that border the minor sides, in which Christian religious devotion is narrated with the universal language of images, lined up, one next to the other like the words of a prayer.

Details of Woven altar tablecloth, 254 x 79 cm, sec. XV, where the figures are represented in very expressive and elegant attitudes and every detail highlights a weaving of the highest professional level:

FIG. 5: we see two dogs (the dog, mythical function, guides man on the night of death after being his companion on the day of life; dogs / holy doctors who are custodians of the flock / faithful) with collar and long curled tail alternating with a tree (Tree of Life) and a fountain (water source that flows at the base of the Tree of Life, in the center of Paradise, gives immortality, youth, teaching). Between their hind legs there is a bird and two other, smaller ones.

FIG. 6: dogs chasing hares symbolize man’s love for women,for  this reason it suggests that the artifact may have been a wedding gift.

The lucid awareness of the meaning and value of these precious materials, jealously preserved by the Countess Itta de Claricni, ensured that they were handed down and became a precious common good. Undoubtedly textiles, the result of the work of skilled and unknown masters, have played a very important economic and socio-cultural role in the past. Furthermore, from a strictly technical point of view, the textile fascinates for the many possibilities it offers, just think of the countless stitches of the embroidery or the intertwining between warp and weft created for centuries with the loom. Materials, colors and techniques determine an infinite range of different surfaces and describe shapes which, due to the characteristics of the techniques used, take on a fantastic appearance and are often rendered with a geometric style.

The fundamental importance of protecting heritage remains to be underlined. Textiles are fragile and difficult to preserve, given their particular nature they are subject to degradation and are therefore condemned, as unfortunately has already happened in many cases, to go missing, I hope that the work done can encourage research in this specific sector and can make everyone more aware of the importance of the textile heritage.

I am grateful to Laura Tilatti Snidaro, attentive and scrupulous curator of the precious material, for the competence, availability, information and advice she gave me, and also to Mariolino Snidero and the lawyer Antonio Picotti, who have unfortunately now disappeared, for supporting this research project.