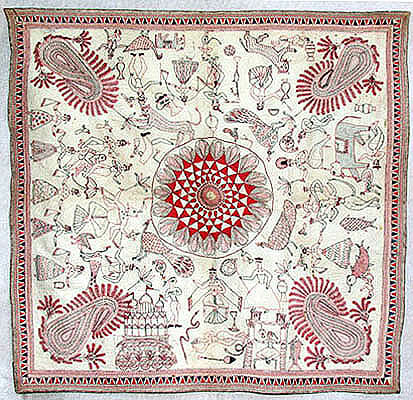 (Deepening of the previous article “Kantha“)

Kantha from the Sanskrit “kontha” is indeed an ancient art. According to a legend, Buddha and his disciples protected themselves from the cold with blankets made by sewing together many layers of fabric with a very simple stitch, a real form of quilting.

Kantha comes from Bangladesh, Eastern Bengal, and it is a form of embroidery in which a straight stitch is used, which we would call basting, and the stitches are so close together that it looks like mending (like a rag, a scrap of fabric).

It is a type of embroidery craft born in a rural environment, realized by women during their free time, in time it became the expression of the imagination of these women who turned to this art when in need. This embroidered cloth, in very different measures, has multiple uses, shawls, light blankets, cushions and home-made carpets.

In some cases, the stitches draw wonderful motifs of flowers, the lotus in particular, birds, animals and geometrical shapes, the tree of life, the elephant, other mythological and religious symbols and references to the hindu religion, or simply themes of every-day activities.

Images taken from the web

It is a form of reuse and recycle of old clothes. Five, sometimes six sari (traditional Indian costume) hand-stitched together using a thread that is usually white and only rarely colored. The almost symmetrical stitching on the cloth gives it a slightly wrinkled, wavy effect. It is similar in some ways to the Japanese “boro”, which privileges the blue color and geometrical motifs. When exploring the textile world of the far East, we who are passionate for patch/quilting clearly see the similarities between all these textile arts practiced by women for passion and creativity, and the traditional work of worldwide quilters. Today there is a wide communication network online, which helps spreading textile art in all its forms.

Images taken from the web

ICH – Intangible Cultural Heritage – important institution that dedicates its work to the research and preservation of traditions, has included kantha among the most important testimonies of history handed down from generation to generation, testament to a culture that is all-female.

What I find fascinating about Kantha, besides its history and symbology, is color and motifs, which have no boundaries, and the creativity of some artists who contaminate it with traditional quilting. We must keep looking, there are many similarities and these unite, never divide us.

Sources: Niaz Zaman with a very interesting selection of articles published on “Asian Journal of Science and Technology”.