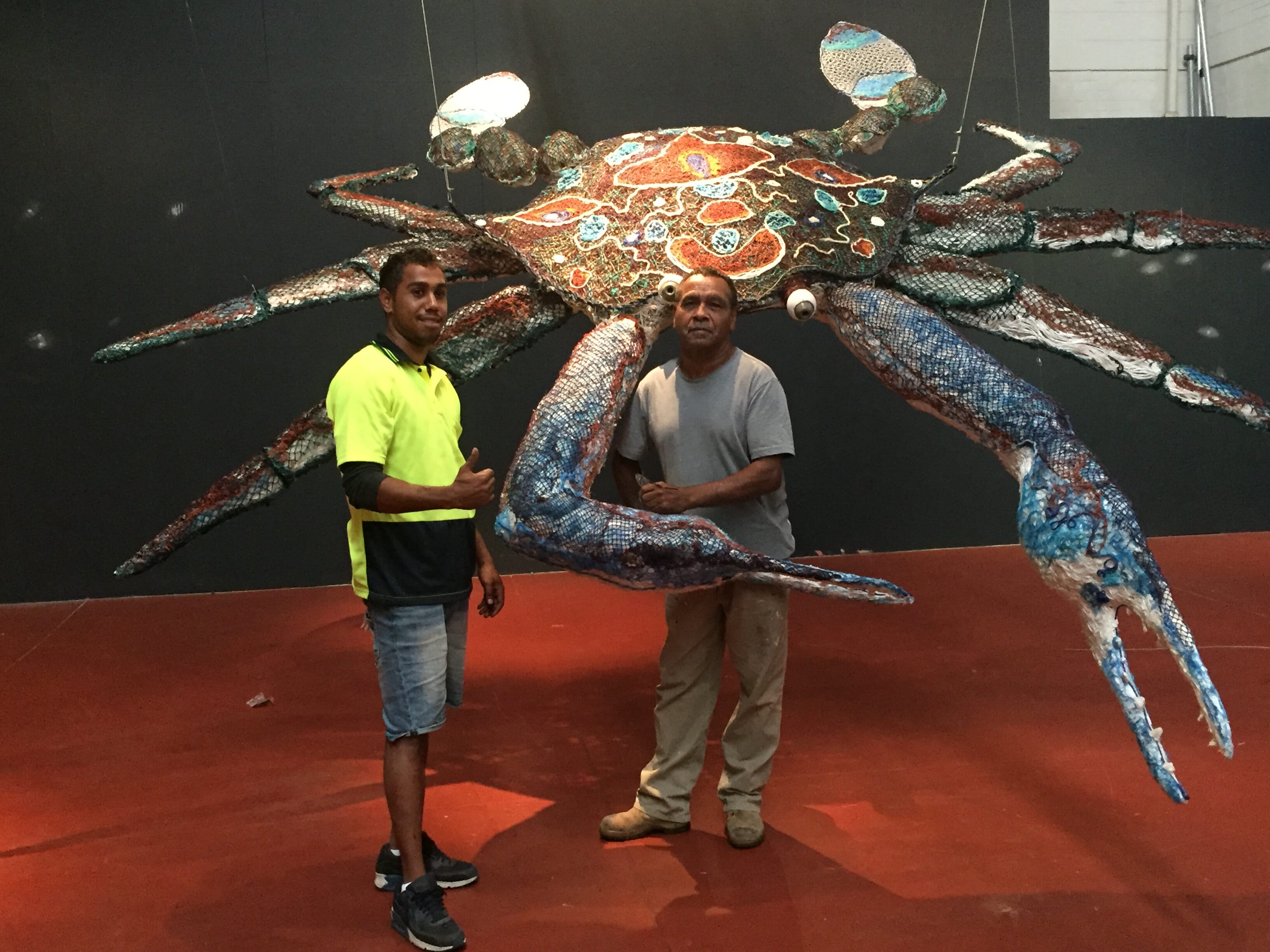 For several years now, many non-governmental organizations have been dealing with issues related to marine pollution, one of which was GhostNets Australia, which focused its efforts on designing and supporting programs against the destruction of marine fauna caused by abandoned fishing nets.

The nets have a dramatic impact on the environment, trapping and killing sharks, turtles, corals and altering the coastal and marine ecosystem to the detriment of the environment.

In 2004, a group of researchers, Australian rangers, artists and volunteers signed an agreement under the name of GNA (GhostNets Australia) to tackle this problem with a new and constructive perspective, supporting a series of initiatives in the field of art that clearly differ from the negative representations that usually accompany the treatment of environmental problems.Although the program was incredibly successful sadly GhostNets Australia collapsed after it lost funding in 2012. The Ghost Net Art Project remains on a voluntary and fee for service basis and continues to deliver exciting art projects.

The key to the success of the project was the involvement of the local indigenous Australian communities that were experiencing the problem of pollution themselves (the communities most involved in ghost net art are Erub and Pormpuraaw) and that have been activated through collaborative interventions with various artists, initiating creative initiatives aimed at using waste materials to transform them into weavings and art objects. Communities introduced to ghost net art through GhostNets Australia continue to develop the art form independently to what it is today.

Over the years, materials have been collected locally cleaning up coasts and seas. Workshops and public events have been organized in the communities involved and all have contributed significantly by spreading both the ecological message, and demonstrating the artistic value of the works made from polluting materials, giving life to fish and corals with nets and plastic bottles, sculptures, carpets, bags, baskets and tools of various kinds.

Subsequently, the Ghost Net Art project was enriched by the participation of artists who have created works inspired by the sea with which they tell stories about the sea and the culture of indigenous Australian peoples. All these works, including the works created by the indigenous communities in Queensland (ErubArts on Darnley Island in the Torres Strait and PormpuraawCommunity in Cape York) have been the subject of exhibitions and installations both in Australia and in Europe and some of the works made are now part of private and public collections. (such as the Ethnographic Museum of Geneva)

Portion of one of the ‘bommies” showing detail of corals and sea anemones. Photo by Greg Adams, courtesy GhostNets Australia

I had the pleasure of contacting Sue Ryan, art director of GhostNet Art Project, and I asked her some questions.

Sue, what impact has Ghost Nets Art had in the beginning and what impact does it have today on the local Australian population?

The Art Project had an almost magical quality about it. It brought diverse people together to share stories and techniques and to create beautiful things from a destructive material. The project was all-inclusive where anyone could participate and add something to the project no matter what skills they had. It was all about connecting people to spread the word about ghost nets, the effect ghost net had on indigenous communities and the global issue of plastics in the oceans. Art was an incredibly powerful tool to deliver this message. It connected to people in a positive and fun way where they could be involved and weren’t powerless to make a difference.

The art was new and fresh and contained a powerful message. Early on in the project the art was collected by public institutions. It wasn’t long before the work was internationally recognized andGhost Net Art evolved to become an art movement in Australia.

I think ghost net art helped to shift consciousness and accentuate the urgency to take action. The project made us aware that no matter where we live, our age, our culture or what we do, we are all connected by water and each of us can make a difference.

Could you tell us how the Ghost Nets Art program is going today? How do you think GhostNets Art will develop in the future? Do you have any ongoing projects?

Ghost net art has a life of its own.  Communities who were initially introduced to ghost net as an art material continue to develop and create amazing and innovative works unique to their region. These works have inspired many people, schools and communities to pick plastics off the coastline and have a go at making their own creations.

What we see now is a wider selection of plastics being used in art and all different techniques being applied to heat, form or manipulate plastics. Any plastics in the environment can create a threat and eventually end up in waterways, so more groups are taking part, even inland farming communities are using their waste materials to make interesting works.  It’s amazing the life that ghost net art has had. It seems to continue to gather momentum internationally and with that we gain further interest again from Australia. It actually seems more relevant now than when it started over a decade ago as climate change has become an undeniable fact and coral reefs are now under threat from rising water temperatures.

I think all the groups and artists have ongoing projects and exhibitions in progress. I’m about to start a two metre sculpture in my studio. I have some new techniques to try out myself!

For further information on the action and developments of the Ghost Nets Art project, please visit the organisation’s website